Update One: Say Hello to a Dark Prince

After this year saw me leave a full-time stint at MOTOR and embark on a new role at WhichCar, it was a WhatsApp message that really drove the change home.

“We need someone to take on the Nissan Qashqai Midnight Edition,” editor Tim Robson wrote. “Keen?” After months of lockdown in Melbourne, the idea of a fresh set of wheels and a city without travel restrictions sounded delightful.

But Nissan’s five-seat small SUV offered a stark change to my last ride.

The Chevrolet Camaro ZL1 I pedalled at MOTOR had eight cylinders, while the Nissan Qashqai Midnight Edition has four.

The ZL1 produced 477kW, whereas the Qashqai is packing 106kW.

The Camaro also had 10 gears, where the CVT-equipped automatic Nissan has none (or an infinite number depending on how you look at it).

Anyway, the point is I’m in completely different territory – but I’m also relishing the chance to discover just how the Qashqai fares in the hotly contested small SUV segment.

For a bit of context, it sits just above the slightly smaller Juke in Nissan’s range, starting at just over $28,000.

It's not dominating the sales race, but then again it's not miserably failing either. During that time diesel engines have been dropped, although the range remains well-served in the number of petrol-powered, front-wheel-drive variants on offer.

Next year an all-new model with hybrid and range-extender EV powertrains should refire buyer interest in the Qashqai.

But until then, the Midnight Edition is a way to bridge the gap.

I’m not sure whether Nissan named the Qashqai Midnight Edition ironically, given its late-life timing, but the added features certainly play up its dark side on the exterior.

Nissan has splashed gloss black across the front V-motion grille, on the bumper blades, mirror caps and roof rails.

The exclusive black 19-inch wheels tie everything together nicely, and the body-coloured wheel arches and side sills add a touch of sophistication, helping it stand out in city streets.

Compared to the Qashqai ST-L variant in its own range, the Midnight Edition adds Alcantara-lined leather seats and carries over its long list of features. 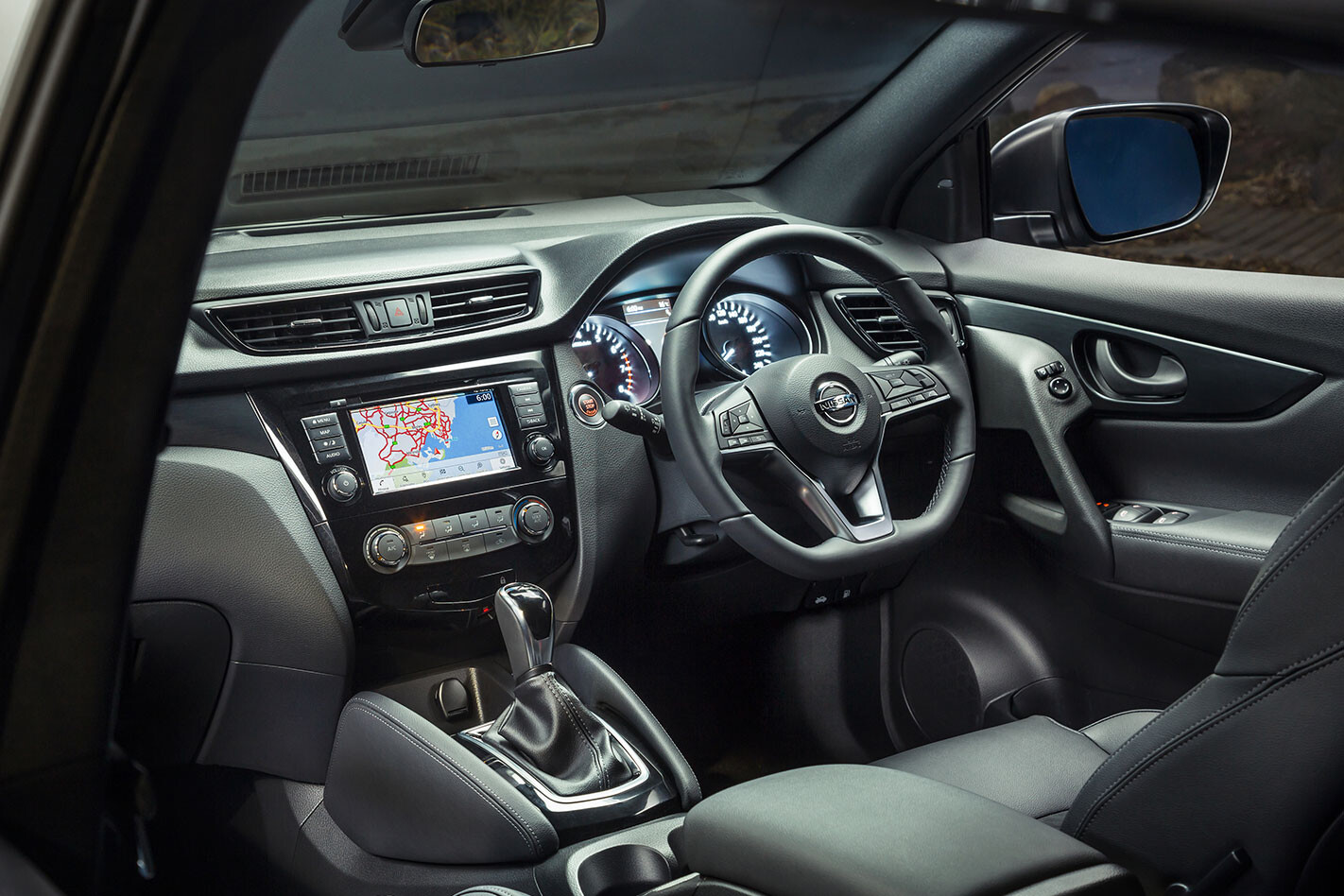 And although most of these technologies are presented in what feels like an ageing cabin, the Midnight Edition does feel particularly full-fruit, even without power driver’s seat adjustment.

What strikes you immediately after settling into the front seats is how roomy the 4.4m-long five-door body feels.

I’ve covered a few kilometres in the first month I’ve had the Midnight Edition, despite spending two weeks away interstate, and it's surprising how easily it swallows four adults. 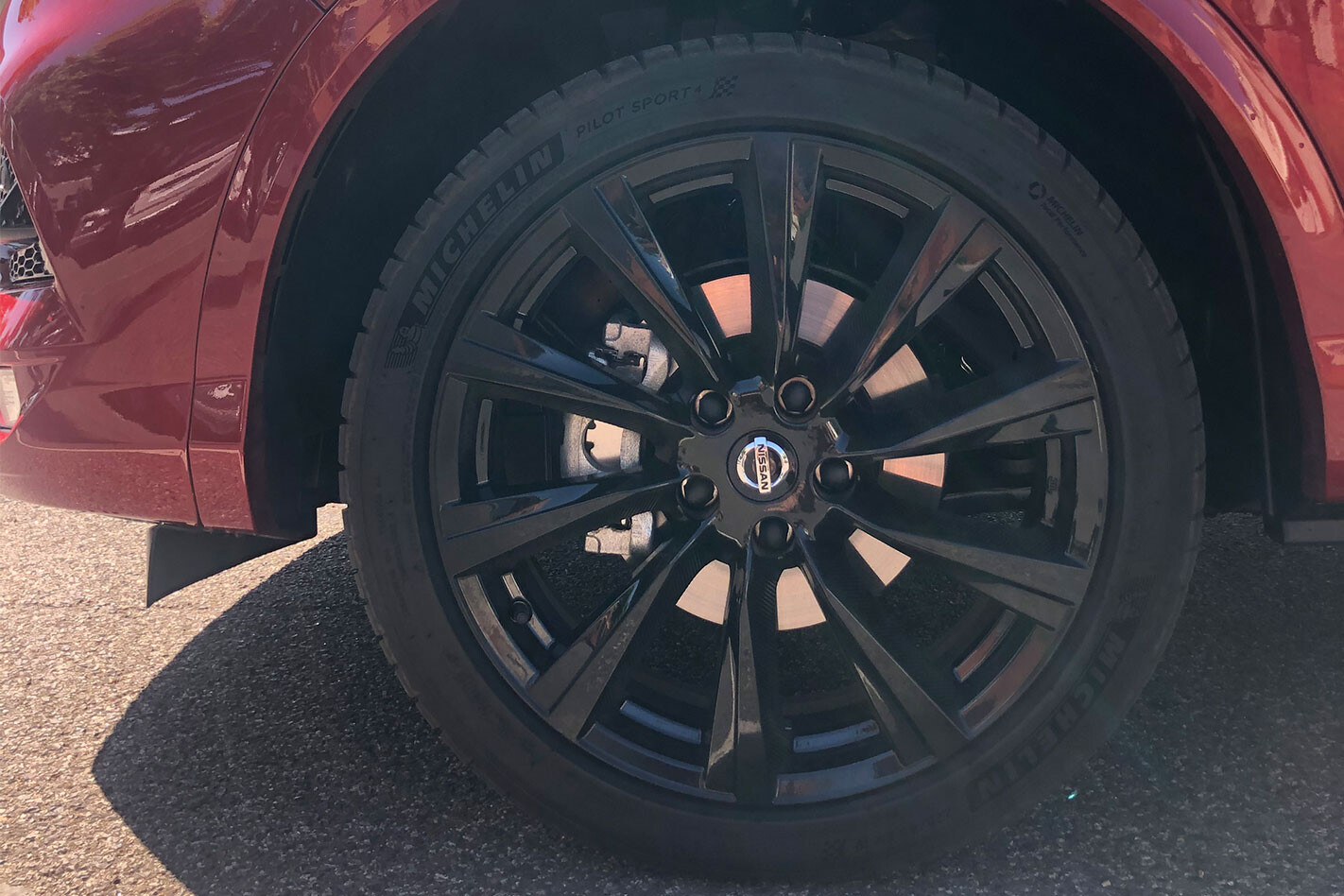 Over the next three months, I have planned a fair bit. First up is a road trip to Sydney, not only to celebrate the relaxing of borders but also to gauge the Qashqai’s chops on the Long Road.

That’ll be followed by some time in the hills, to see what Nissan’s engineers had to improve and enhance when working on the new Qashqai’s handling – while also getting to know the Qashqai in a city environment.

Update two: The Long Road (or not)

I rarely look forward to tackling the Hume Highway.

Just before Christmas, though, when Australia’s state borders were beginning to open up, the dead straight 900km-odd drive had become a lifeline between my family unit – the dog, girlfriend and I – and loved ones in Sydney.

It would also become the Nissan Qashqai Midnight Edition’s second long-term update, focused on its highway manners during the nine-hour drive up that would magnify any strengths and weaknesses. However, when news broke about an outbreak cluster of COVID cases in Avalon, Sydney, you can imagine how crestfallen I felt when our plans changed – just like thousands of other Australians.

Unable to leave Victoria without enduring hotel quarantine on return, we replaced our Christmas lunch in Sydney with a trip down the Victorian coast.

But it wouldn’t be the only one, with repeated jaunts down the M1 West Gate freeway to Torquay planned for the summer, each offering glimpses at how the Qashqai handles the highway and high speed.

Considering this, it was a good time at the start of the holidays to check the Qashqai’s tyre pressures and learn just how much range you’ll get out of one full tank. Recommended pressures on the somewhat-overkill Michelin Pilot Sport 4 tyres fitted, on 19s, are 33psi at the front and 30 up back, with rear tyre pressure increasing to 38 with more than four people on board.

Should any tyre deflate, there’s a 16-inch spare lying under the boot floor.

The fuel tank, meanwhile, can accommodate an impressive 65 litres of 91 octane fuel.

MORE Does driving slower save fuel?

With the Qashqai drinking 8.3L/100km during my city and highway driving so far, you should theoretically be able to extract 783km out of the one tank.

That’s a lot of driving.

However, while the Qashqai offers a good seating position, the pew lacks cushioning and under-thigh support, and you’ll want to spend two hours maximum in the driver’s seat before a break. Melbourne’s freeway that leads to Torquay is in various states of disrepair, so it offers a good range of surfaces to test any car's ride.

After a few trips over it, I’ve learned the Qashqai surfs the series of long, undulating dips that heavy trucks have pressed into the freeway over time with soft damping rebound, where it could almost pass as a comfortably damped sedan.

Such praise is short-lived, though, as sharp, intrusive bumps expose a much harder compression stroke. On balance, the Qashqai’s ride is tolerable enough for long distances.

I was spared navigating the Nissan’s rather old-looking infotainment with Apple CarPlay coming to the rescue, but the tyre noise that drums into the cabin prevents you from hearing a podcast clearly.

We’d put this down to a lack of sound deadening, as a guess, because the car’s 2.0-litre four-cylinder engine – codenamed M20DD – also drills a loud buzz into the cabin under acceleration.

It doesn't sound particularly bad and quietens right down when pegged at 2000rpm for an indicated 100km/h, but just is obnoxiously loud. 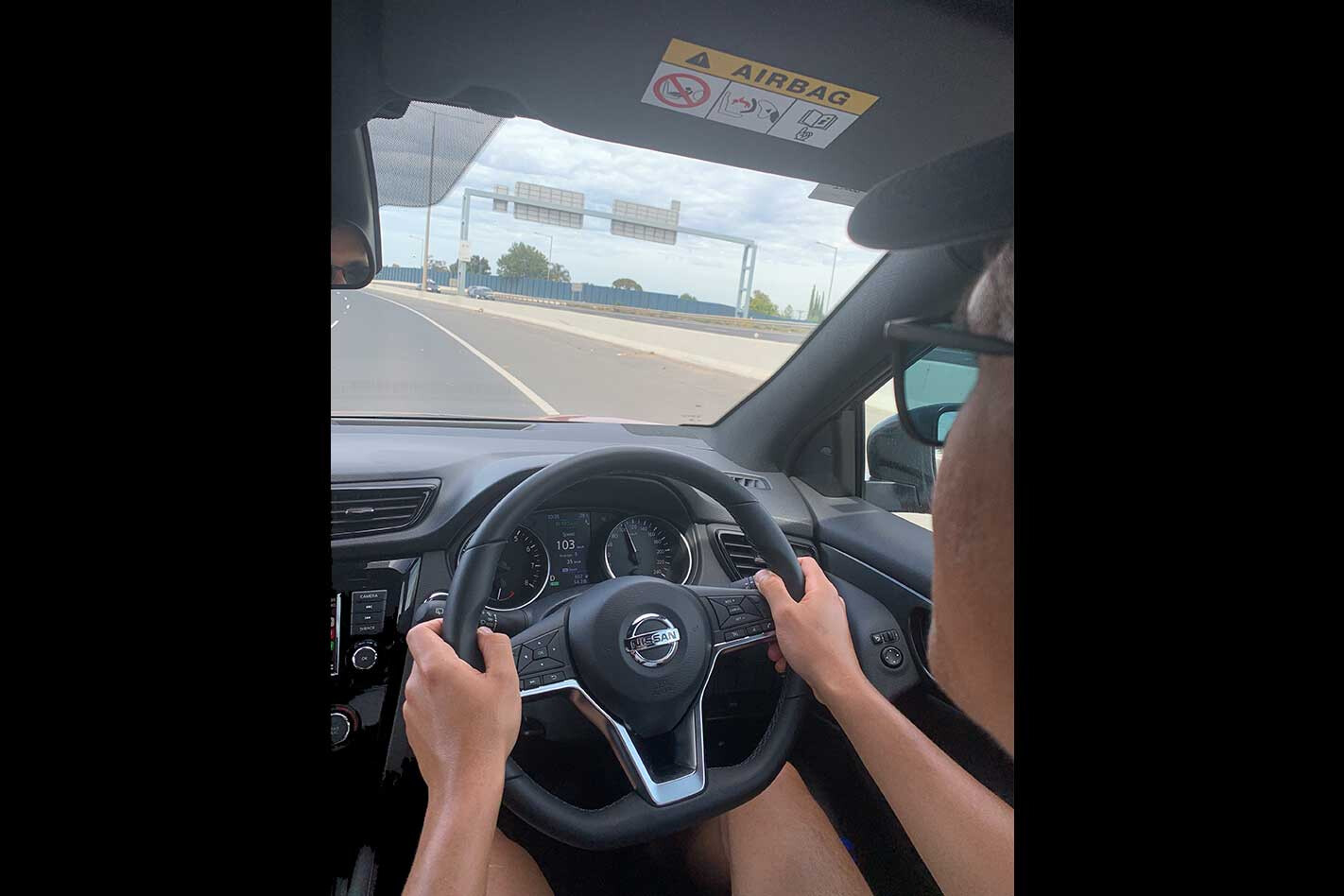 Other stuff Nissan’s done well to include on what is a seven-year-old car is active safety technology like forward-collision warning and blind-spot monitoring.

Midnight Editions, despite their premium, miss out on the AEB reserved for top-spec Ti variants, and the Qashqai lacks active cruise control across the whole range.

Maintaining freeway speeds in heavy traffic becomes a game of pressing the cruise control’s Cancel and Reset buttons, something preferable to brushing my Qashqai’s brakes, which are starting to go soft on the top part of the pedal stroke. Oh, and it’s worth mentioning the Qashqai’s speedometer is significantly optimistic, with a radar check displaying our speed at 96km/h when I had the car set to an indicated 104km/h.

After this, I’d recommend the Qashqai for highway driving on occasion while pointing out that its most attractive asset for long drives remains a huge boot. 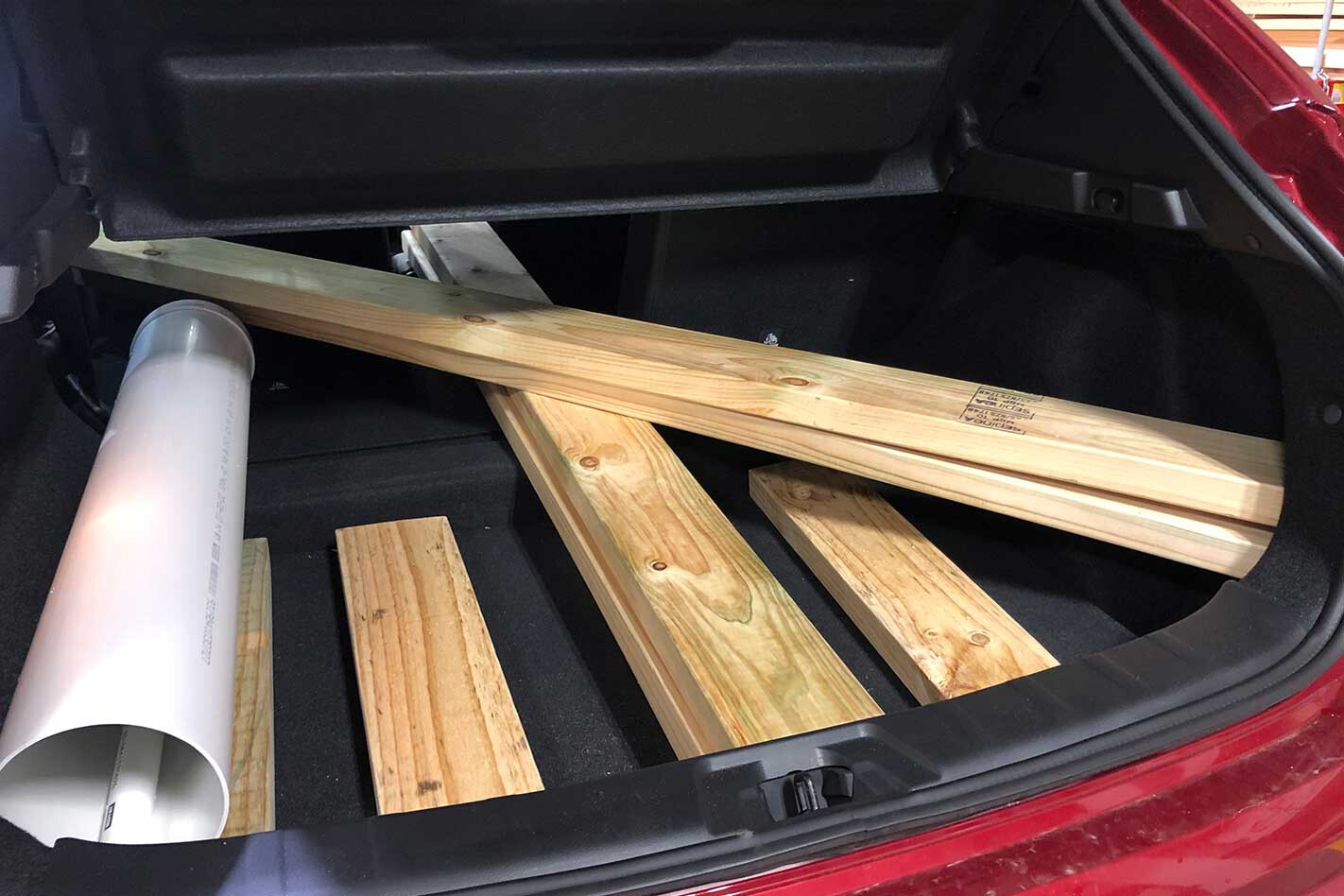 Not only could the Qashqai’s boot easily swallow all our luggage, plus an inflatable mattress, and a couple of beer slabs, it smashes a trip to Bunnings.

Seen here, it’s taken four 1.8m wooden planks in its boot along with four 60cm planks laid along the floor, as well as a 150mm PVC pipe for good measure. Impressive.

I'll also add that the Qashqai's air-conditioning is particularly quick to work, cooling the cabin in a matter of minutes while stationary after a start-up in 30 degrees Celsius.

Next month, though, its boot size won’t matter. I'll uncork the Midnight Edition on twisty roads and investigate just how necessary those chunky Michelin Pilot Sport 4s are.

There must be a part of every chassis engineer that dies to know most owners will never drive a car to its full potential.

I thought about this when I was reading up on the all-new Nissan Qashqai, which we understand will hit Australian shores next year.

Between its stiffer chassis and high-end suspension design, it sounds like Nissan has paid a lot of attention to how it drives. So, with my time with the current-generation Midnight Edition running out, I wanted to seek out a few corners and learn what lies underneath my Qashqai.

After all, fitting a set of tyres like the Michelin Pilot Sport 4 on any car is making a statement. But Nissan didn’t spend big on rubber and then cheap out on the current Qashqai’s suspension.

Like any small hatch or SUV with a shred of handling ambition, it pairs struts up front with a multi-link rear setup and equips anti-roll bars all around.

Of course, the biggest challenge with SUVs is holding them steady as their mass sloshes around on a higher centre of gravity. Jacked-up roll centres make striking a balance between ride quality and decent handling particularly hard.

Considering this, the Qashqai's sometimes firm ride should mean the trade-off would be half-decent handling, right? Well, sort of. 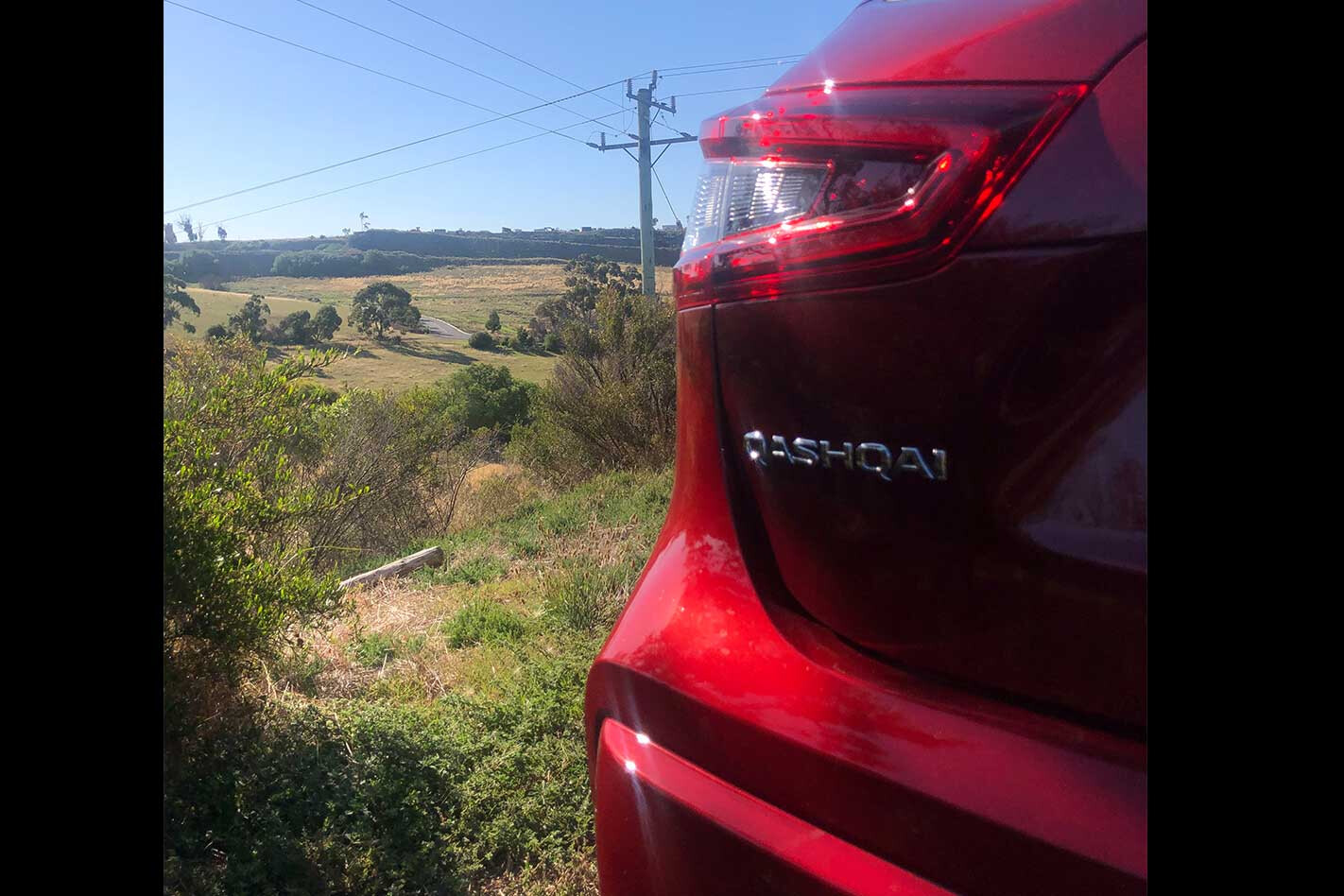 Traction is good – as it should be. The front-wheel-drive Qashqai has only 106kW and 200Nm to put down through the 225mm-wide Michelins.

Although the road we found is far from high-speed, the Qashqai is unfazed by off-camber corners and remains planted. The flip-side of this is it also feels relatively inert from turn-in to mid-corner, failing to use the grip on offer to develop a more involving cornering stance.

Something about the Qashqai in corners feels like many Subarus, which hunker down around their ground-hugging all-wheel-drive systems.

Part of me, however, is relieved about how staid it is through corners. The Qashqai’s speed-sensitive steering fails to deliver any useful information about either the road surface or the exact angle on the front wheels. 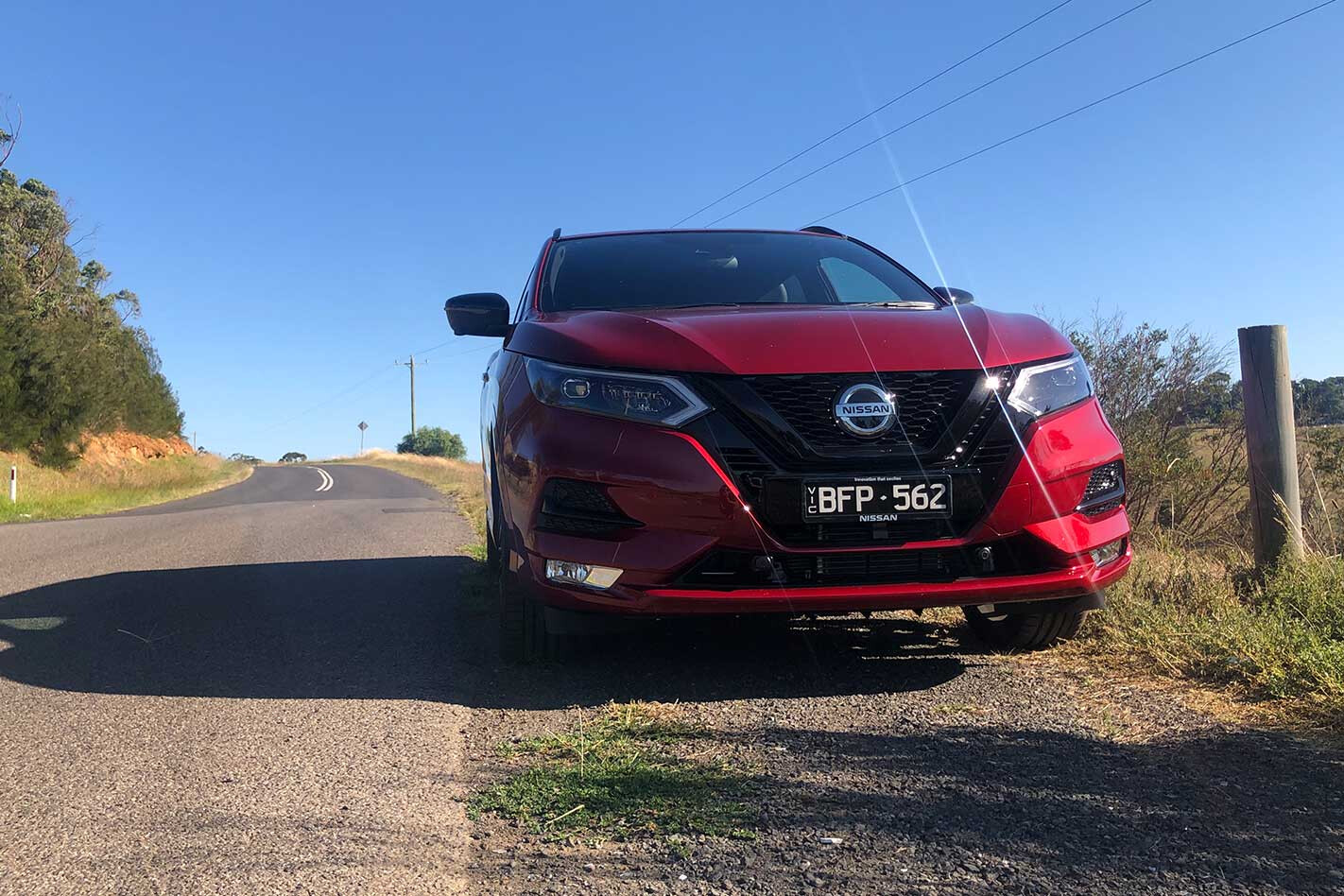 You can at least rely on the brakes that feel well matched to the car’s speed and grip.

At the end of a short blast, it’s clear the Qashqai’s not a car that you’ll wake early to find empty roads with. Considering Nissan doesn’t market it as a performance car, this shouldn’t come as a surprise, but maybe there’s an engineer in Japan that now feels vindicated.

MORE New mid-size SUVs worth waiting for in 2021