Sometimes it’s really hard to stand out from the crowd. No matter how worthy the particular product is, it simply can’t gain traction against reputable competition.

Enter the fourth-generation Ford Focus, a hatchback with sales results that conversely reflect its proficiency as a genuinely sorted product. In a segment filled with top-sellers like the Toyota Corolla, Hyundai i30, Kia Cerato and Mazda 3, the plucky Blue Oval-badged five-door doesn’t get a look in. But in ST-Line guise, it definitely should.

The sales race is brutal and given the lacklustre performance of the Focus, Ford rationalised its local lineup in 2020 in an unforgiving fashion. We’re left with just three variants; the ST-Line, the high-riding yet front-wheel-drive-only Active and the gung-ho ST hot hatch. 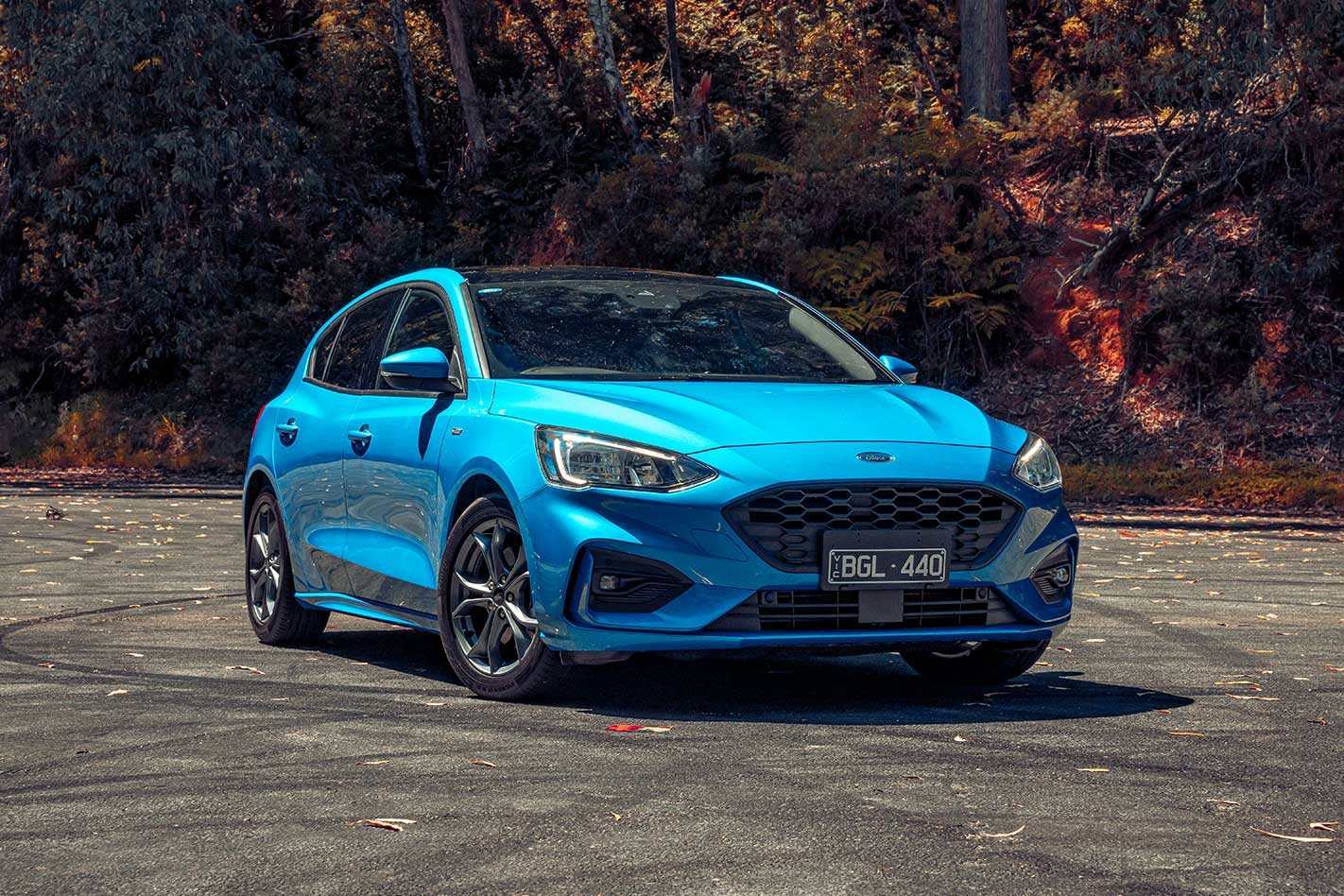 The impressive three-cylinder-powered ST-Line tested here fulfils the pseudo warm hatch brief, but its identical pricing with the Active means the range starts at a lofty $30,990. However, it should be kept in mind that the ST-Line’s mechanical gubbins go a long way to justify the price premium.

That’s because the star of the show is the diminutive 1.5-litre three-cylinder turbo, an engine that punches hard above its weight division and gives the Focus a rather unique selling point.

It genuinely feels as strong as a 2.0-litre four-pot. And with 134kW and 240Nm, its raw figures certainly back that up, which means the Focus is more than a match for the segment. 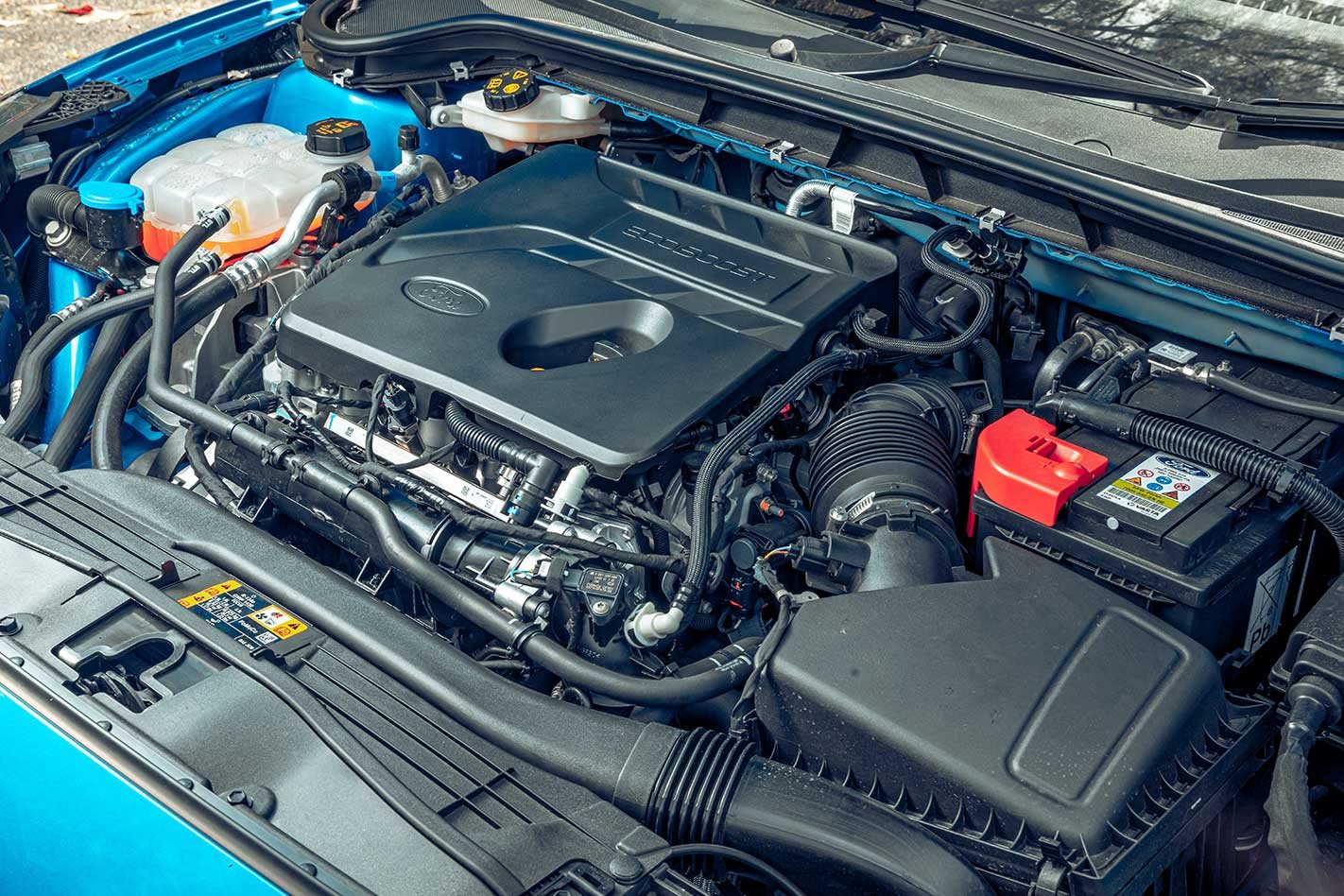 The EcoBoost unit revs cleanly and with purpose to redline, but also draws on its meaty torque curve, which extends all the way to 5000rpm from as low as 1750rpm. Be it city driving or overtaking on the open road, the ST-Line never feels out of puff with a linear power delivery.

It sounds good, too, although it would be even better if you could hear even more of the inherently balanced, thrummy three-cylinder via the Sport mode (Normal and Eco are the other options). And not only does it miss out on the throaty note of the Fiesta ST, but there are also no overrun histrionics, either.

While Ford claims a combined consumption figure of 6.4L/100km, we recorded a thirstier 8.75L/100km – however, that did include spirited road-testing kays mixed in with CBD and highway stints. Interestingly, the three-pot can deactivate one of its cylinders at cruising speeds to save fuel. 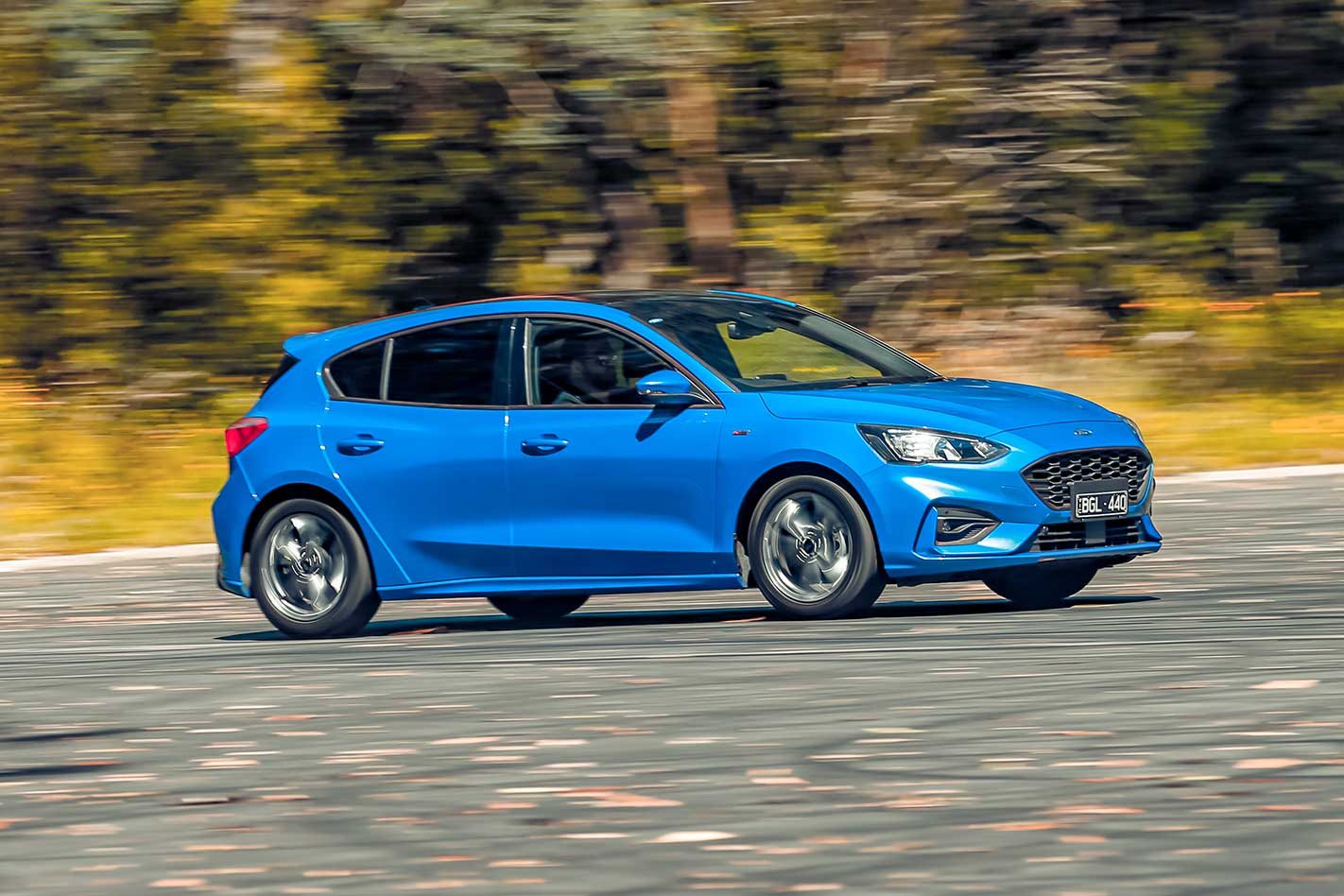 It’s a shame Ford doesn’t endow the Focus ST-Line with the full-fat 147kW/290Nm Fiesta ST tune (or offer the manual that is available in other markets). It seems like a missed opportunity to go toe-to-toe with the likes of the Hyundai i30 N Line and Kia Cerato GT in straight-line prowess. Yet, despite a 0-100km/h time of 8.3 seconds on paper, it isn’t a slouch, and the ST-Line’s handling ability is a match for the EcoBoost’s charm.

Now using a sophisticated multi-link independent rear suspension setup instead of the torsion-beam configuration the hatch originally launched with (there are MacPherson struts up front), the ST-Line displays surprising dynamic talent for what is ostensibly a run-of-the-mill hatchback.

Running on chubby 215/50 Continental ContiSportContact 5 rubber (wrapping rather ‘small’ 17-inch alloys), the ST-Line does tend to roll over its sidewall when pushed. 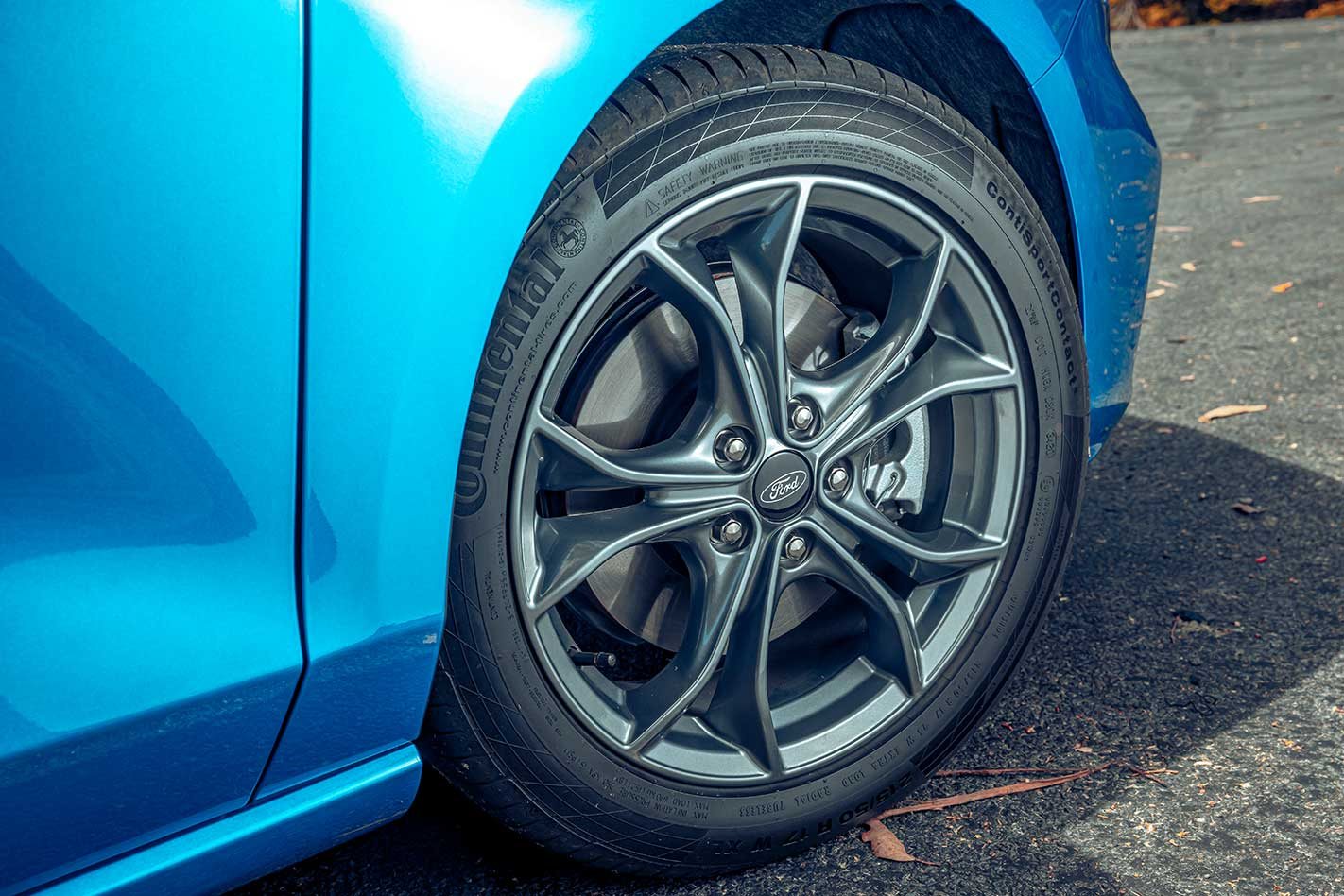 However, it’s easy to get into a rhythm with it and work with the movement to exploit the sorted chassis. It feels effervescent and light on its feet, making you want to explore its warm-hatch credentials.

Using the stronger and lighter C2 architecture, the ST-Line has a tidy front-end with ample grip and a level of rear-axle compliance that doesn’t waver when encountering nasty mid-corner bumps.

The steering is a little vague on centre and in the initial stages of lock, however, it adds reassuring weight the more you turn towards the apex. Oh, and those taller sidewalls do help with the ride quality that’s classified as firm, not harsh – especially given the 10mm drop in height over the now defunct-for-Oz Trend variant. 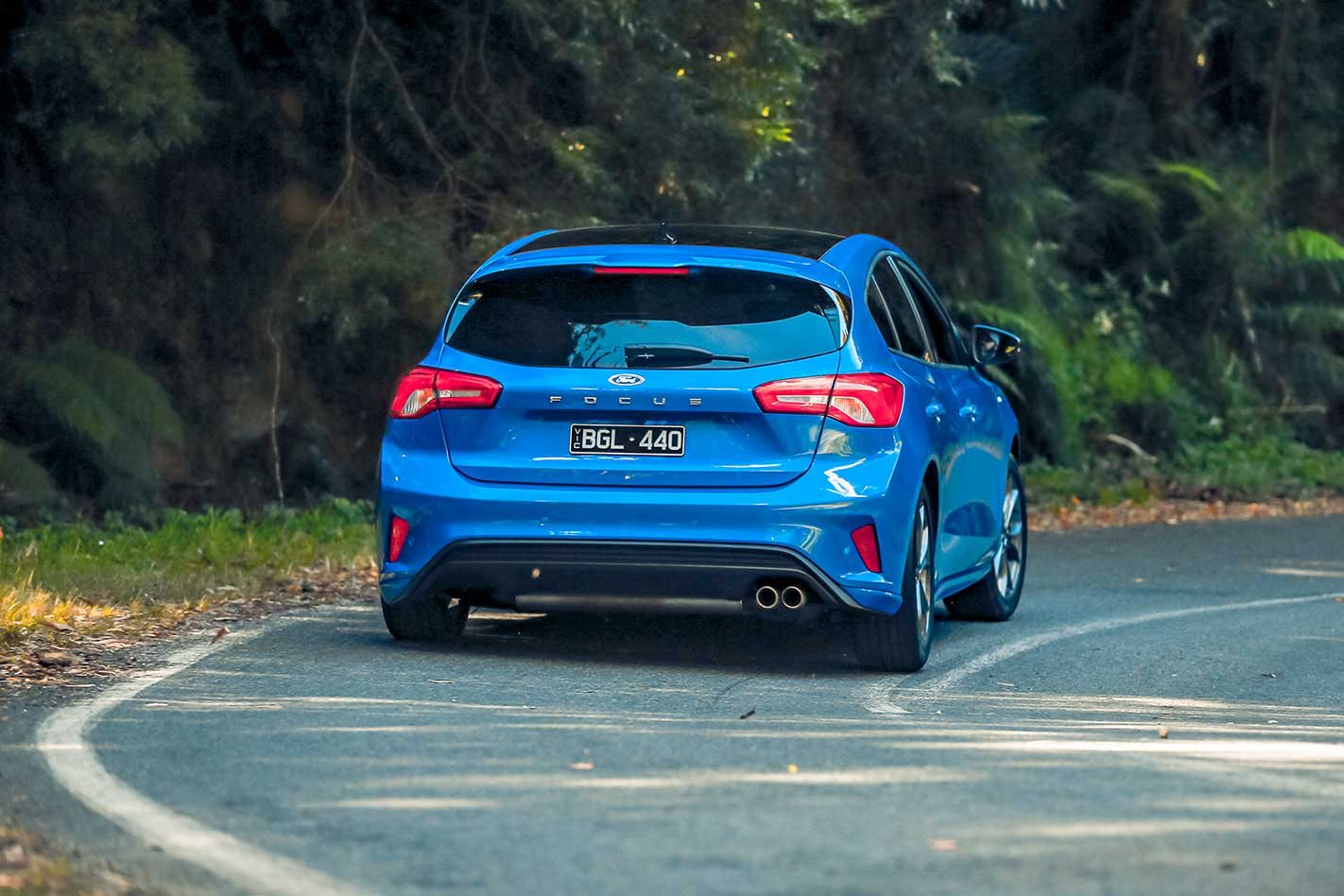 The weakest link in the powertrain is the eight-speed automatic, which, ironically for a torque-converter unit, displays behavioural traits akin to a dual-clutch gearbox. Slow-speed smoothness isn’t its forte, exacerbating the initially lax throttle response. Switching from drive into reverse gear can also be met with a delay.

On the run it is smooth and imperceptible but forget using the manual mode and steering wheel-mounted paddles when the mood takes you as it doesn’t hold gears to redline – it’s more a Sport mode than full manual control.

And the e-shifter won’t be to everyone’s liking, especially when it doesn’t really free up much more console space and it’s harder to use than a conventional shifter. Form over function, indeed.

The rotary-style dial is also supposed to be a design decision to encourage overall cohesion. But while the previous-gen Focus was lumped with a busy cabin, the fourth generation is a little stylistically nondescript. 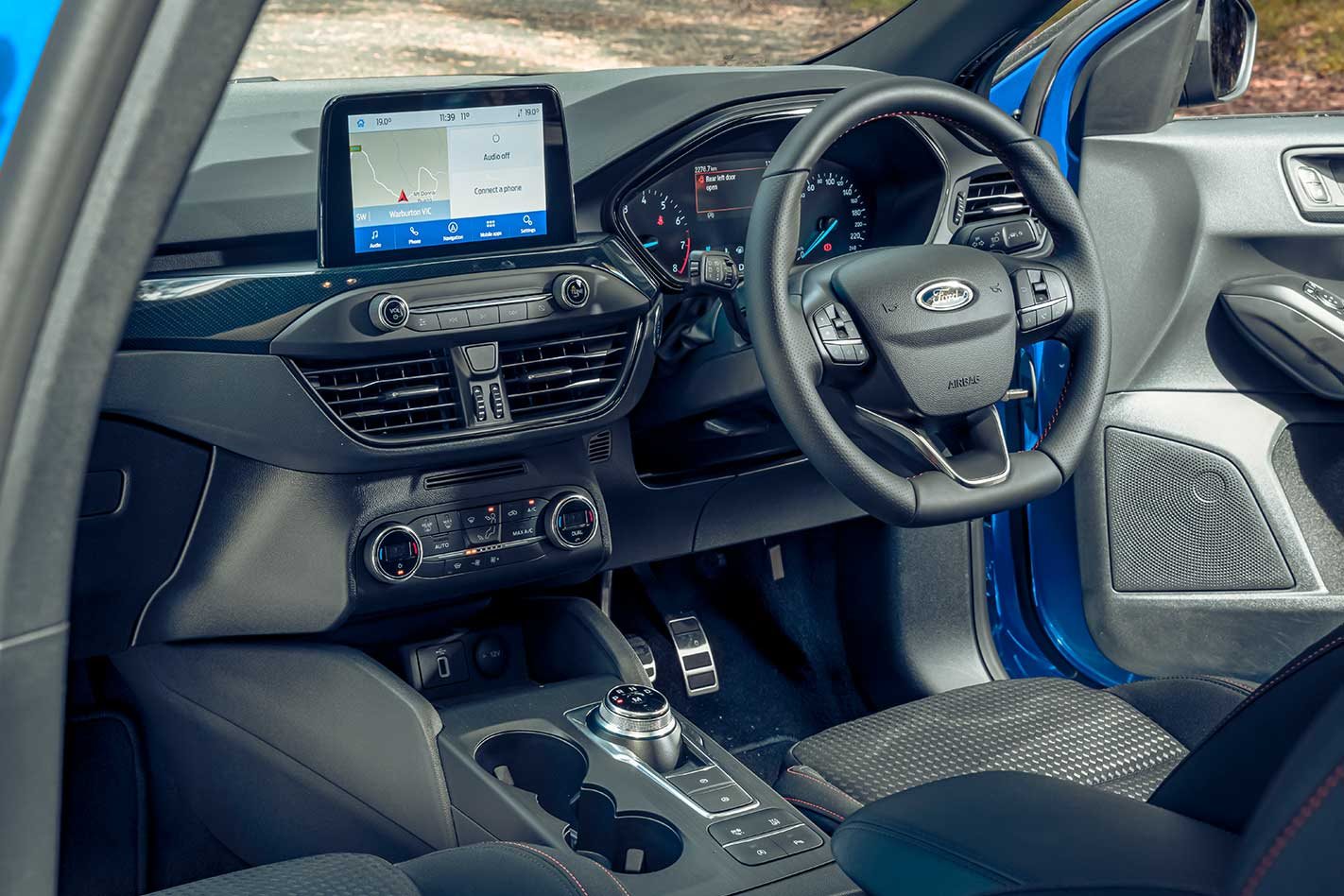 And some of the materials used mean it won’t trouble a Volkswagen Golf or Mazda 3 for premium ambience despite matching them in terms of build quality. There are a few hints to the sporting intent with ST-Line scuff plates, dark headliner and red stitching for the cloth seats and flat-bottom steering wheel.

Fiddly e-shifter aside, the ergonomics are sound with a logical layout and the sports-orientated seats are a nice addition – the driving position is also spot on behind the wheel.

Ambient lighting raises the mood at night, too, while outward vision from all angles is good. Road noise on course-chip tarmac can be heard at speed, but overall untoward exterior sounds don’t become too intrusive within the cabin. 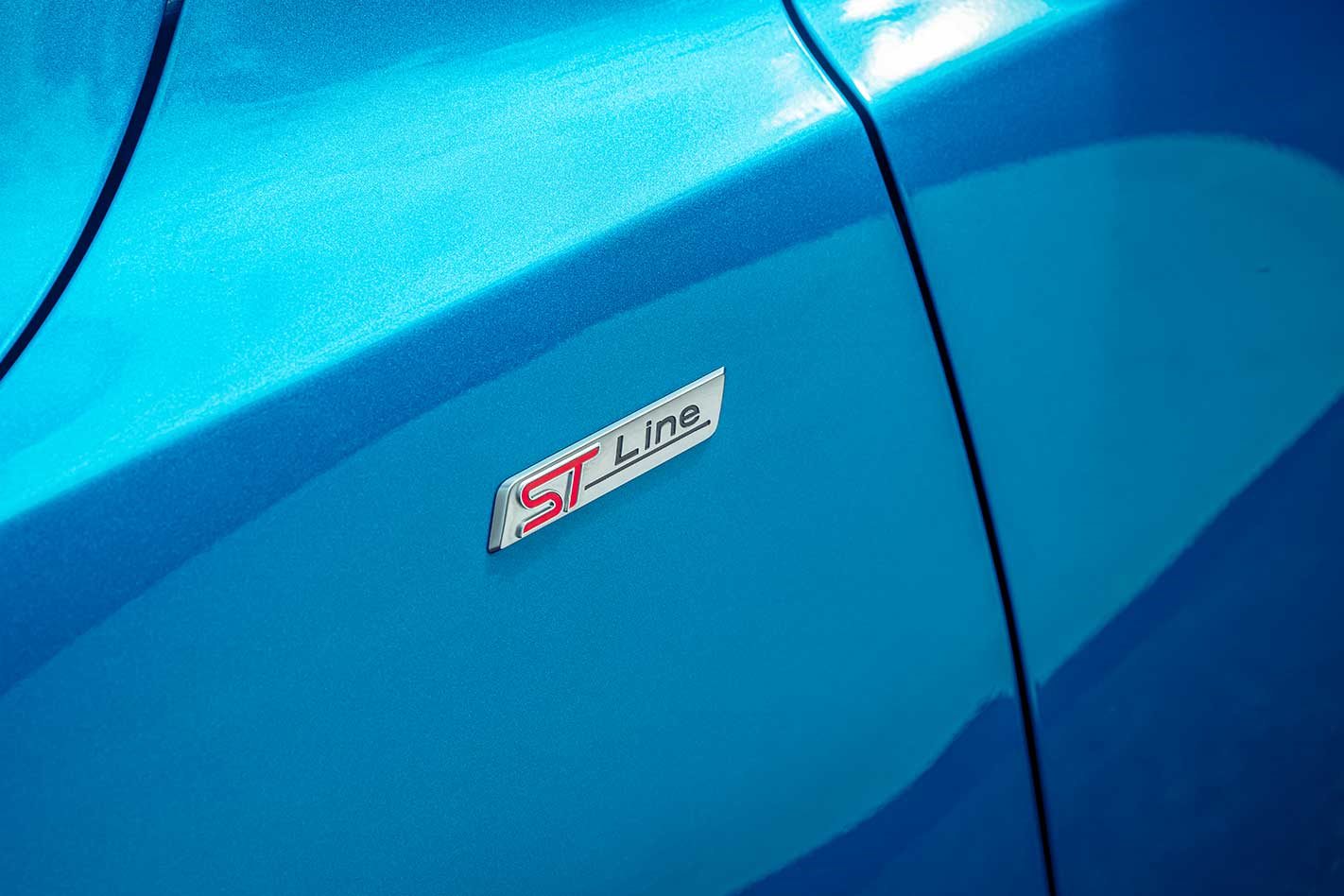 A high-mount 8.0-inch touchscreen handles the infotainment comprising Ford’s SYNC 3 system with inbuilt satellite navigation – but most will bypass it to utilise wired Apple CarPlay and Android Auto.

The instrument cluster comprises analogue dials, which flank a digital display for various functions like the trip computer and speedometer. 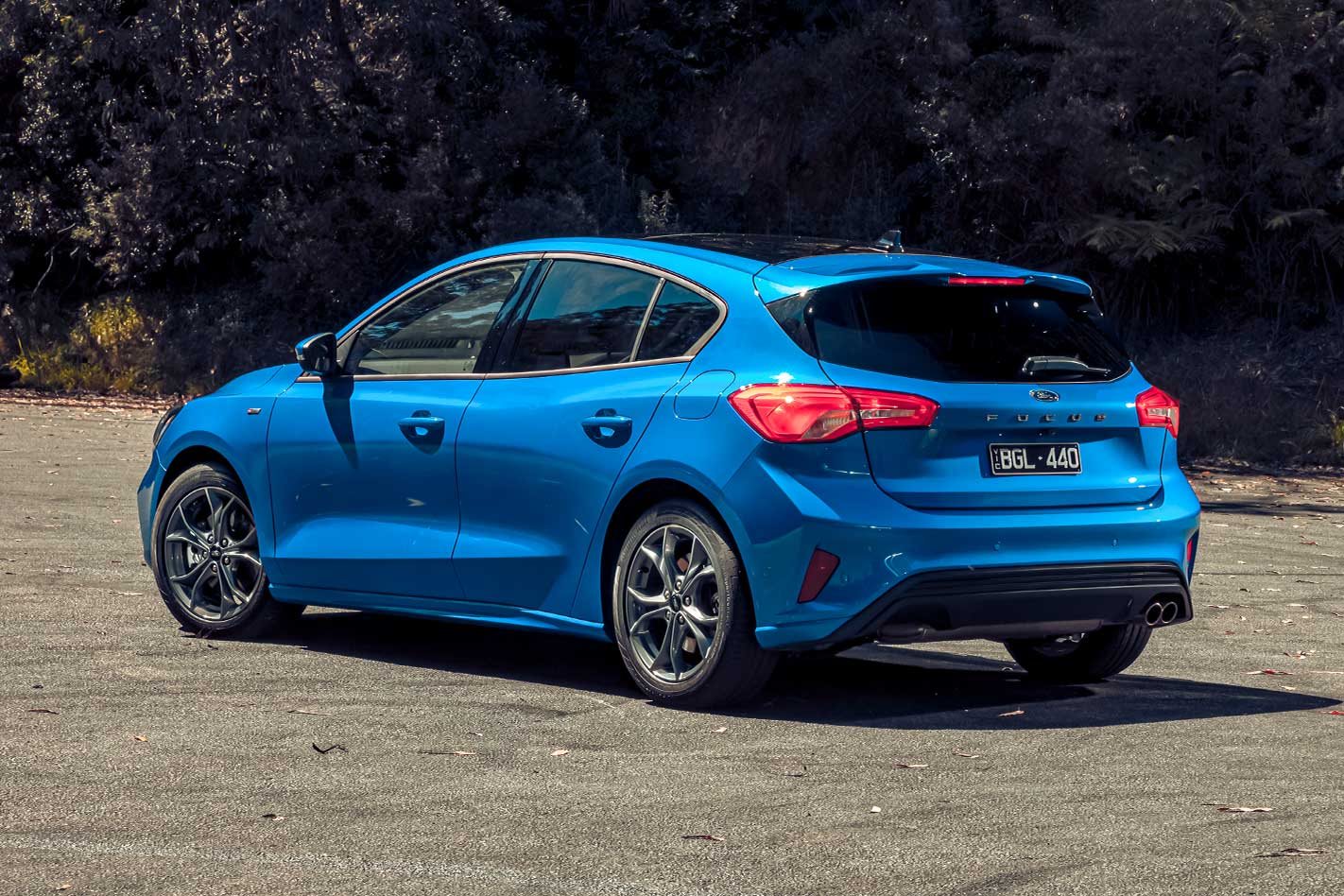 FordPassConnect uses an embedded modem to talk to your phone via an app. Once hooked up, it can be used to carry out various tasks like locate the car, lock and unlock the doors and start the engine. The latter engages the climate control, which will either warm or cool the cabin depending on the settings programmed before the car was turned off.

With a 2700mm-long wheelbase, backseat legroom is generous if not commodious. However, even with the optional panorama sunroof, headroom is impressive. It’s a shame there’s no central armrest, air vents or USB charging ports in the back, but both outboard seats gain a mesh map pocket, there is a 12v power socket and the seat backs of the front pews are covered in soft material instead of hard plastic. 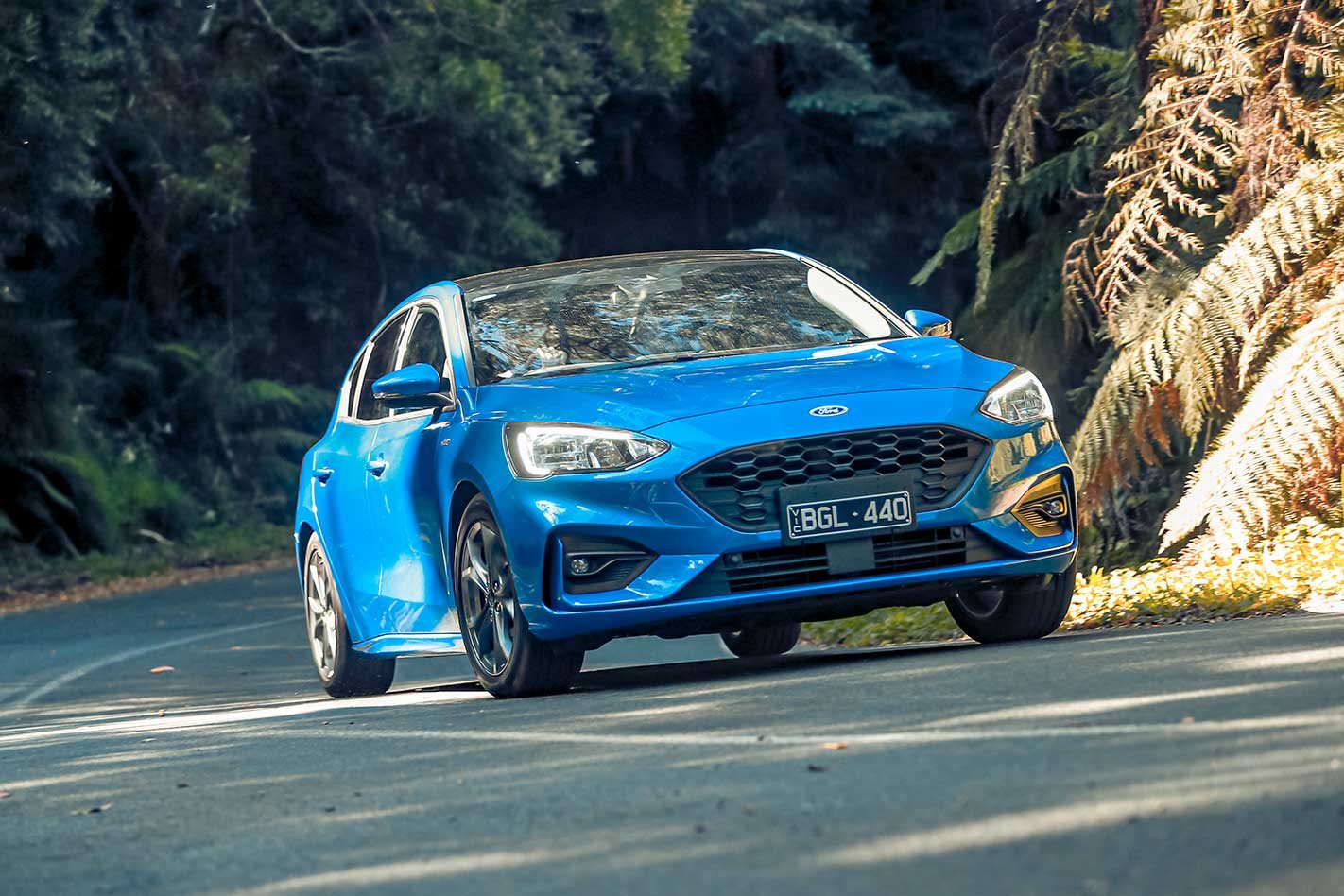 The rear seats fold in a 60:40-split, and while the boot floor is flat (hiding a space-saver spare), there’s a lip when the rear pews are stowed. However, at 373 litres, the cargo capacity is competitive for the class and is noticeably larger than that of the strong-selling Corolla (217 litres).

Capped-price servicing comes in at $299 per standard A or B scheduled service for up to four years or 60,000km (whichever comes first), with intervals deemed to be every 15,000km or 12 months. The Focus ST-Line is covered by Ford’s five-year, unlimited kilometre warranty for peace of mind.

Ultimately the ST-Line is a great package, yet there’s a caveat. And that’s the price. While the $30,990 sticker is lucrative, you need to tick the Driver Assist Package to gain the same level of safety tech found in rivals – which will set you back an additional $1250. 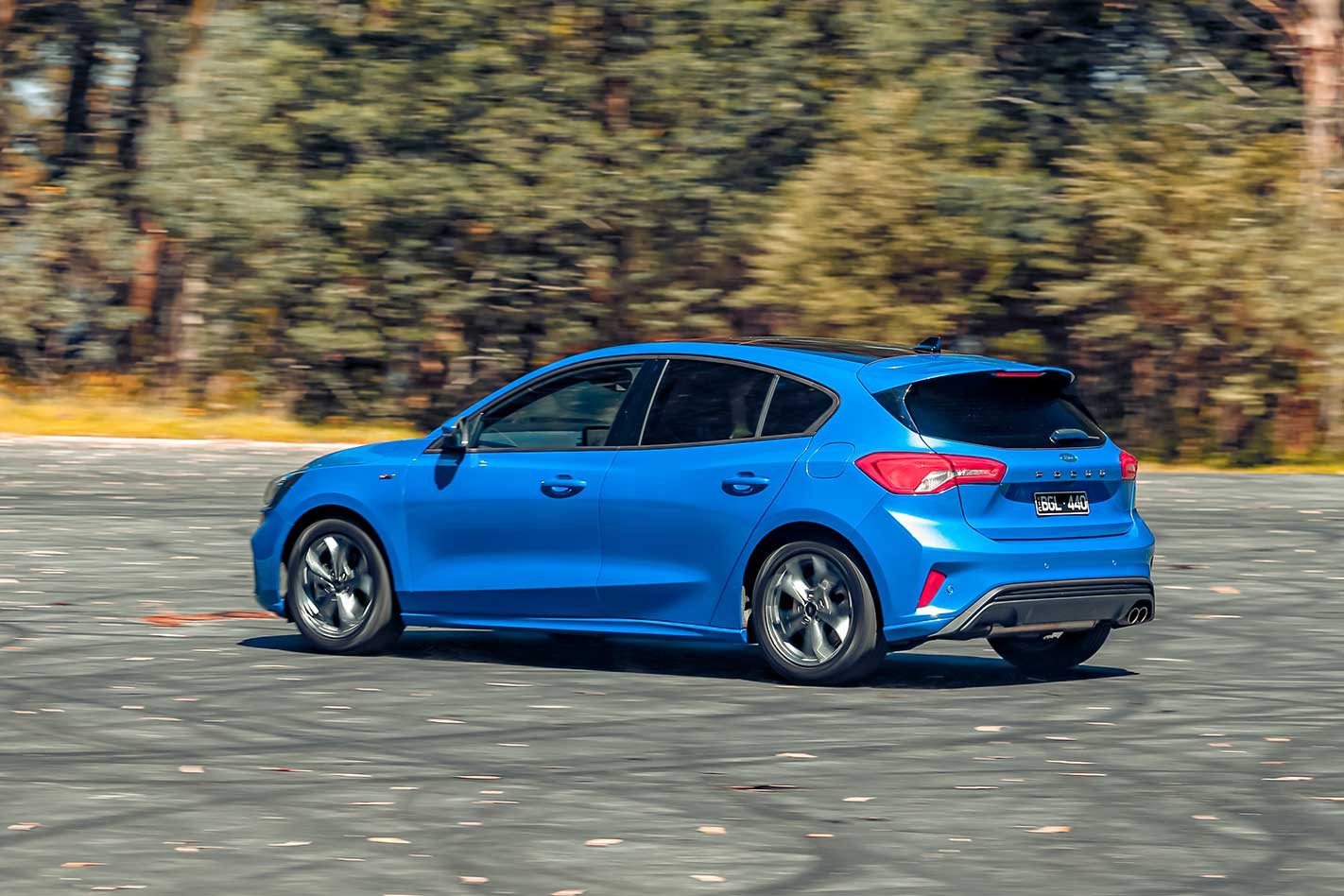 Plus, to coat your ST-Line in the hero Desert Island Blue hue (or any of the premium metallic paints) you’ll need to fork out $650 and a further $2K for the panoramic glass sunroof. That tallies to an RRP of $34,890 all in, but before on-road costs.

Yes, the Focus is starting to age given its late 2018 release and the ST-Line is missing some key standard equipment. However, in a world where run-of-the-mill hatchbacks can be boring and generic, the warmed-up ST-Line offers a charming persona that’s hard not to be enamoured by.

What’s more, it hasn’t lost the dynamic edge that made the original Focus such a landmark car. And that makes it worthy of standing out in the crowd for all the right reasons.