The small, fun to drive Mazda3 comes with an impressive package and a stylish look.

The New Mazda3 comes in a dazzling array of models. Six petrol versions alone are available in either hatch or sedan. All come with a choice of either six-speed automatic or six-speed manual transmission - the latter a refreshing option given so many car manufacturers have dumped the third pedal gearbox.

All three base options - Neo, Maxx and Touring - come with a 2.0-litre four-cylinder engine, while the higher grade SP25, SP25 GT and SP25 Astina models are blessed with the more powerful 2.5-litre. That’s 24 permutations of the same model with prices ranging from $20,490 for the entry level Neo through to $35,490 for the Mazda 3 SP25 Astina.

Mazda's ubiquitous 3 definitely offers something for everyone in the small car space.

This is a good looking hatch. Like its very big brother, the Mazda CX-9, Mazda's 3 sports a fierce front fascia and a sporty wide stance, giving the car a planted and stable appearance.

Steering via the thick, leather wrapped tiller is sharp. More leather encases the shift lever giving even the lower grade models a sporty and classy feel. 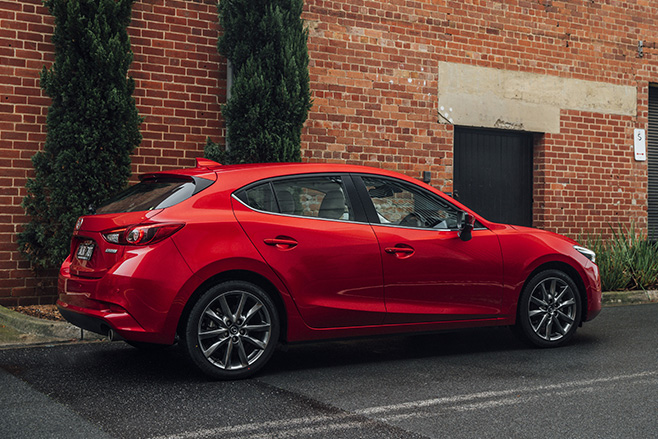 The Touring comes with an easy to use, intuitive multi-media system and a 7.0-inch touchscreen that also offers click-wheel controls.

Thanks to relatively small (and welcome) 16-inch wheels, the suspension is exceptionally smooth over the inner city’s many speed humps.

While the boot only manages 308L, it's easy to use thanks to the hatchback function and folding rear seats. This driver managed to manoeuvre a 145cm folding clothes horse into the rear without unnecessary swearing.

Claimed fuel consumption is a class-leading low 5.8L/100km. The reality, over more than 160km of stop-start city driving, was closer to 9.3L/100km.

The direct-injected 2.0-litre four-cylinder petrol engine generates just 114kW of power and only 200Nm of torque - much less “zoom-zoom” than desired. Overtaking at freeway speeds isn't easy in the smaller-engined models. 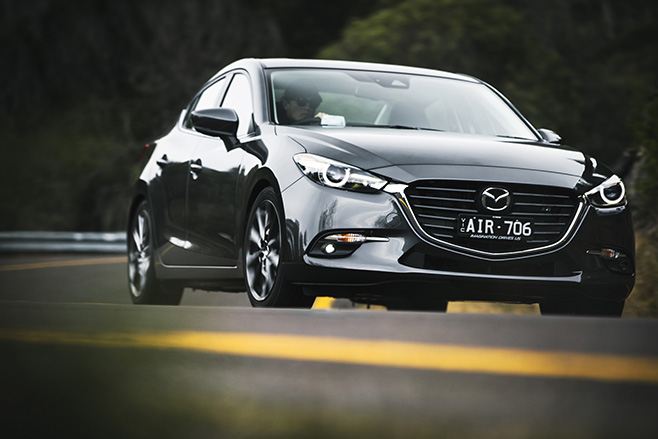 The 3's forward A-pillars are well positioned, but rearward's C-pillars create a substantial blind spot. These make both changing lanes and reverse parking a challenge. Fortunately the Touring includes safety options like Blind Spot Monitoring and Rear Cross Traffic Alert (which notifies drivers who are backing out of a garage or parking space if there are vehicles in the way).

To reduce fuel use, the Mazda3 is fitted with i-STOP (idle-stop) technology which switches off the engine when the car comes to a halt. To the uninitiated intermittent silence from under the bonnet can be unnerving.

Second pew passengers are treated a bit like an afterthought. Squeezing three adults in the back is a push. Even three kids will struggle to get comfortable. Inexplicably there are neither air vents nor adequate storage in the rear. For example there’s only one back-of-front-seat storage envelope - on the left-hand side.

The cockpit is a little noisy. What’s louder? The Touring’s engine noise or the doof-doof playing in the car next to me at the lights. Point is, you can hear both. The Mazda3 could do with some of the excellent insulation Mazda bestowed upon its CX-9.

The Hyundai i30, which was the number one selling vehicle in Australia for four consecutive months in 2016. Japanese rival the Toyota Corolla is cheaper but offers both less power and boot space. 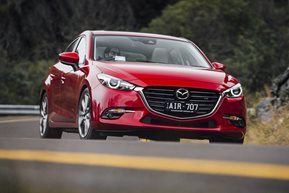