The Toyota LandCruiser is as good as it gets if you want to head Outback in a big and comfortable four-wheel drive wagon. Even if Outback travel is not on your to-do list, the 200 Series is surprisingly friendly in the city for a vehicle this big. Most versions seat at least seven.

Manoeuvring in tight city carparks. This is a big vehicle.

Having to scrape up the cash to pay for the fuel bill.

There is just one basic body, a large SUV-type wagon. Every model except one has a horizontally split tailgate and three rows of seats, and is designed for families. The exception is the GX, a commercial vehicle designed primarily for fleet use, which has a vertically split, barn-door tailgate and only two rows of seats. All models have full-time four-wheel drive with dual-range gearing. The LandCruiser is classed as an upper-large SUV, lower priced.

Toyota has two other vehicles carrying the LandCruiser badge including the smaller LandCruiser Prado SUV-type wagon and the more workmanlike LandCruiser 70 Series that comes in a range of guises including single- and double-cab ute, and troop carrier van.

What features do all LandCruiser 200s have?

The 4.5-litre V8 turbo-diesel is the only engine available in a LandCruiser 200, and uses 9.5 litres/100km (city and country combined) in the official test, though expect this to rise by about 20 percent in real-world driving.

The V8 diesel is fitted with a six-speed automatic gearbox, the only gearbox on offer.

There was a 4.6-litre petrol V8, but this accounted for a fraction of sales and was dropped from the range in August 2019.

Prices start with the commercial grade LandCruiser GX, but this model is unique not just because it seats only five and has vertically split doors at the rear. It’s the only model with vinyl floor coverings instead of carpets, and 17-inch pressed-steel wheels.

The GX is also the only model with a snorkel-style engine air intake standard. This draws air from just above the roofline on the driver’s side, and allows you to ford creeks without fear of water getting into the engine and damaging it. And you can’t get a GX with the petrol engine.

Spend more for a LandCruiser GXL and you get: 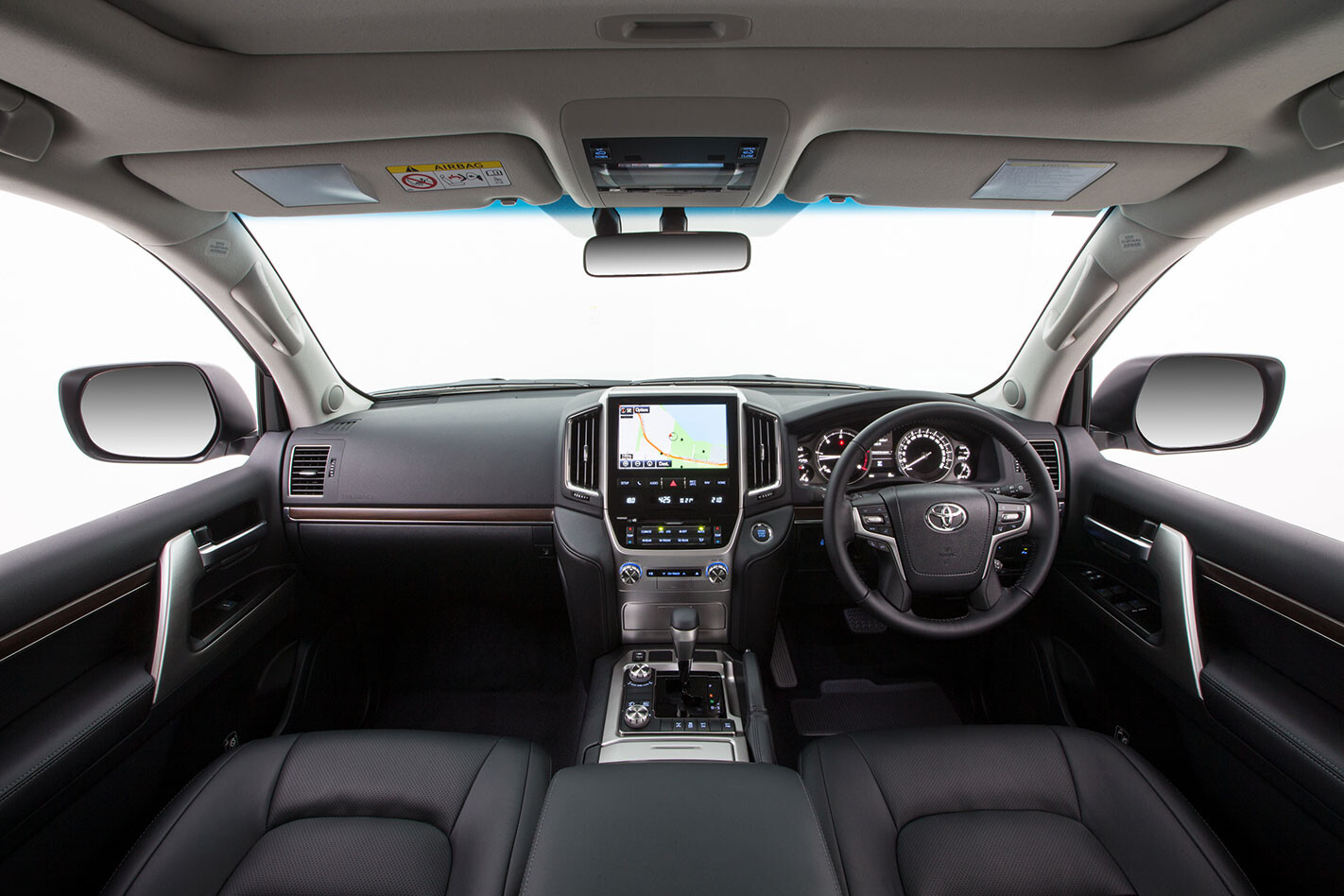 The GXL can also be fitted with Toyota’s Kinetic Dynamic Suspension System (KDSS) as an extra-cost option. This gives not only flatter on-road handing but also more off-road capability, by automatically adjusting the tension on the suspension’s anti-roll bars.

Spend more again for a Landcruiser VX and you get:

Every model except for the GX loses significant cargo space to the third-row seats.

Moving up the feature levels also brings an increasingly heavy car, which is less responsive to drive.

The more expensively equipped models also have a reduced payload – they can carry less weight in cargo and passengers. This is very relevant for trips in remote areas, where often you need to carry extra fuel, wheels and water.

The alloy wheels on most LandCruisers are less sturdy in rough terrain than the steel wheels on the GX.

If you choose a VX or Sahara, the third-row seats accommodate only two people. In other LandCruisers they accommodate three.

Multi-Terrain Select does not offer significant off-road benefits and is fussy to use. Likewise the Multi-Terrain Monitor is more gimmick than benefit, even if it can be useful at times.

Every colour except white is an extra-cost option.

How comfortable is the Toyota LandCruiser?

The Spartan look of the GX outside is mirrored inside with its vinyl floors. Otherwise it doesn’t present badly and is very user friendly, with simple controls and big dashboard buttons. And every LandCruiser has a large, roomy and comfortable cabin with excellent seating.

More costly models provide increasing luxury, even opulence. However the most costly, particularly the Sahara, host myriad switches, not all of which fall readily to the driver’s eye.

On the road the LandCruiser 200 feels like a big limousine, with a comfortable and ultra-quiet ride – even if the truck-style rear suspension layout allows bumps to affect your heading on some rough roads.

The engine offers fuss-free driving with ample power on hand at all times, and works in contented harmony with the six-speed automatic gearbox.

The GX has some wind noise produced by the snorkel.

What about safety in a LandCruiser?

All LandCruiser 200s bar the commercial-grade GX rate as Excellent for safety, with head-protecting side-curtain airbags extending past all outer passengers.

The basic GX still rates as Very Good, the key difference being the absence of a reversing camera.

The most expensive LandCruisers – the VX and Sahara – get an additional two airbags, for a total of 10. These are positioned outside the middle seat row and below the side-curtain airbags, to cushion the chests of middle-row outer passengers from side-impacts.

The LandCruiser Sahara (only) gained active cruise control and an active safety suite that draws on radar and camera based sensors. A couple of these, blind-spot monitoring and rear-cross traffic alert, were added to the VX in October 2018. 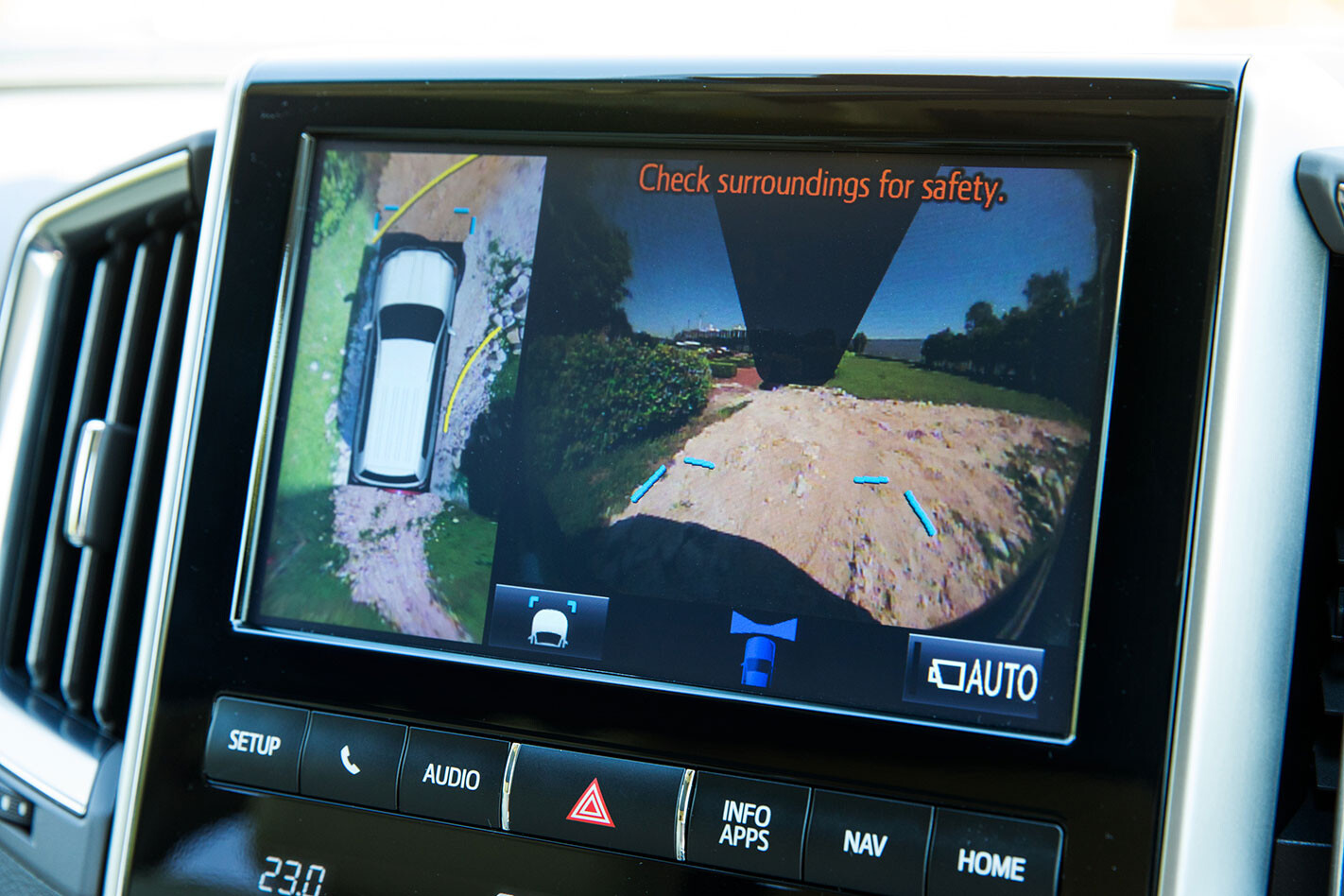 Perhaps the chief among the Saharah’s active safety features is Toyota’s Pre-Collision Safety System – which includes autonomous emergency braking that operates at city and highway speeds. If it concludes that a crash may be imminent, it triggers an audio-visual warning, pre-tensions seatbelts, and if you don’t brake hard enough adds brake pressure. If you don’t brake at all, the system will brake for you.

The Sahara also monitors lane markings, and sounds a warning if you are drifting distractedly – or perhaps sleepily – out of your lane on the highway. It also warns you, should you indicate to change lanes, if a nearby vehicle is in a blind spot on that side. And a rear cross-traffic alert warns you of approaching cars when you are backing out of a parking spot.

The Australasian New Car Assessment Program (ANCAP) has awarded the LandCruiser 200, its maximum five-star rating, most recently in October 2015.

The LandCruiser 200 isn’t a driver’s car as such, as it doesn’t like to be driven hard. It’s simply too big and heavy, and the suspension is tuned for comfort and not precision. However, the 200 is still an enjoyable car, thanks to its effortless engines, its comfort and quietness, and the fuss-free way it can tackle difficult off-road conditions, especially equipped with KDSS.

If you want an extremely capable and comfortable wagon that’s at home in the bush and the outback, the 200 is impossible to go past.

Rear seats don’t come much more roomy or comfortable than with the LandCruiser 200. The Sahara’s heated rear seats and separate air-conditioning controls for the rear of the cabin add up to a major comfort bonus.

The third-row seats, accessed by folding the backrest and then sliding forward the base of the second-row seats, are best suited for children or small, agile adults.

The LandCruiser, especially the GX with its cavernous cargo area, is great for carrying stuff. Models with third-row seats still have generous luggage space.

The full-sized spare wheel is carried under the car, so that in the event of a flat tyre, luggage does not have to be unpacked to get to the spare.

MOREBoot sizes of Australia's favourite SUVs
All models are rated to tow 3500kg – as much as any big 4WD – and make great tow vehicles. Both engines, but especially the diesel, offer plenty of power at low engine speeds, which is needed for towing.
MORELandCruiser or Patrol: Which is better for towing?

Where is the LandCruiser 200 made?

All LandCruiser 200s are made in Japan.

Not much in a car as complete. The Land Rover Discovery offers sharper on-road handling.

There are seven-seat, off-road capable SUVs available at lower prices, among them Toyota’s own Prado and Fortuner. But none matches the LandCruiser’s big V8 diesel engine, interior space and comfort, effortless towing, tough build, and off-road performance.

The Nissan Patrol is comparable for size but not for the strength of its diesel. The most recent, Y62 Patrol is available only with a big petrol V8.

Another off-road capable, seven-seat SUV you might consider is the Ford Everest, which is based on the Ford Ranger ute. However, like the Prado and Fortuner it won't haul as hard as the LandCruiser.

MORE10 Greatest 4WDs of all time

Are there plans to update the LandCruiser soon?

The 200 Series appeared in late 2007. A minor update about November 2015 brought a reshaped nose, slightly reduced fuel consumption from the diesel engine, larger touchscreens on most models, and active safety aids for the Sahara.

In August 2019 Toyota dropped the low-selling and thirstier V8 petrol engine from the range.

The LandCruiser 200 will be around until 2021 by which time it's expected to be replaced by the LandCruiser 300 that's seems set to bring more economical turbo V6 and hybrid powertrains.

The GXL fitted with the optional KDSS is comfortably the pick of the range.

However, the GX is a better starting point as a specialist remote-area touring and off-road vehicle.