WhichCar do you live with? 2018 Alfa Romeo Stelvio Diesel 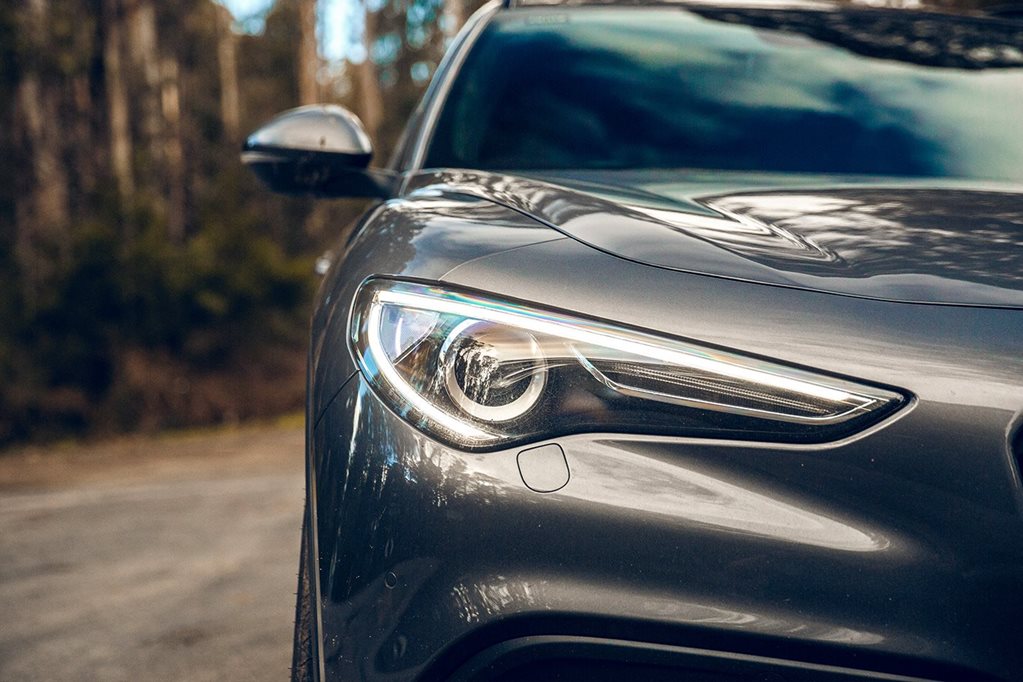 Can two weeks with the diesel Stelvio convince a non-believer that Alfa Romeo's debut SUV lives up to the hype?

An SUV designed to act as a high-riding sibling to the seductive and sporty Giulia? Can’t be done. Won’t be as enjoyable or as eye-catching. And definitely not with a diesel engine. These are all things I had sternly believed upon first learning about the Stelvio – even with the knowledge that ahead of its launch, the top-spec Quadrifoglio took out a new record for “fastest sports utility” at the beloved Nürburgring. This five-seater would be a second or third cousin, at the very best...

Well, armed with a base model diesel as my daily drive over the summer break, let’s say I was only half wrong. 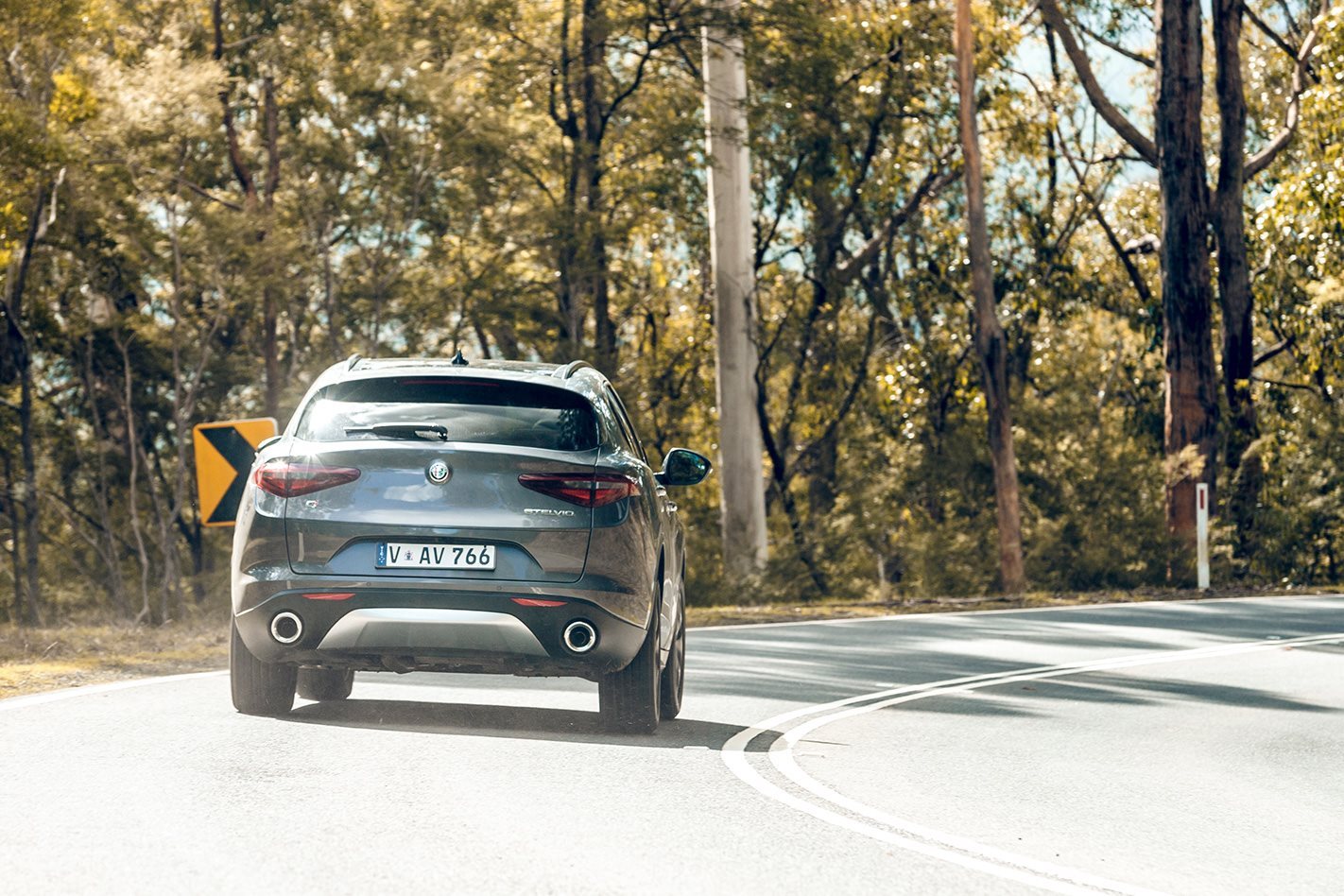 The Alfa Romeo Stelvio is the Italian brand’s first foray into the lucrative mid-sized SUV market which hit showrooms last year.  As mentioned, Alfa has based this five-seater on the Giulia - and these are elements that can be seen in the styling of the racy instrument cluster, cabin, seats optional Ferrari-like silver paddles and steering wheel-positioned press button start and of course with the drop of that beasty twin-turbo V6 Stelvio Quadrifoglio.

Alas, that’s not the variant I’m driving, but just know that it exists, and on-paper, that six-figure-tagged  Stelvio is likely to have the closest DNA to the Giulia.  My summer ride is the 2.2L, turbo diesel four-cylinder, which sits alongside the four-pot petrol Stelvio at the bottom of the range. In between this and the Quadrifoglio, there is also a mid-spec Ti.

In terms of rivalry, the Stelvio’s biggest competition is the Jaguar F-Pace, Porsche Macan and Mercedes-Benz GLC.

READ MORE: WhichCar do you live with? VW Tiguan Allspace

How much is the Alfa Romeo Stelvio Diesel?

Normally priced at $67,900, which is just above the $65,900 price tag of the petrol equivalent, this particular model is the First Edition – which offers a stack of added extras well worth the $6000 for the First Edition Pack. This pack is a sweet spot of leisure-y accents adding comforts that take this from a cheap-looking, luxury-priced SUV to something with a bit of attitude and much-needed showroom appeal. As personally, I find the standard Alfa Romeo base cabin too plastic and cheap-looking, something that would become one of those gripes that would only grow on one’s nerves over time.

Read more: The best apps for travellers, driver and those on-the-move

Aside from the stereo, another element I was particularly thankful for in this pack – especially when hammering this thing down the Hume Highway and on some dirt tracks around the outskirts of Canberra - it also comes with tricky KONI adaptive shocks, which puts miles between the handling of the standard non-adaptive dampers. 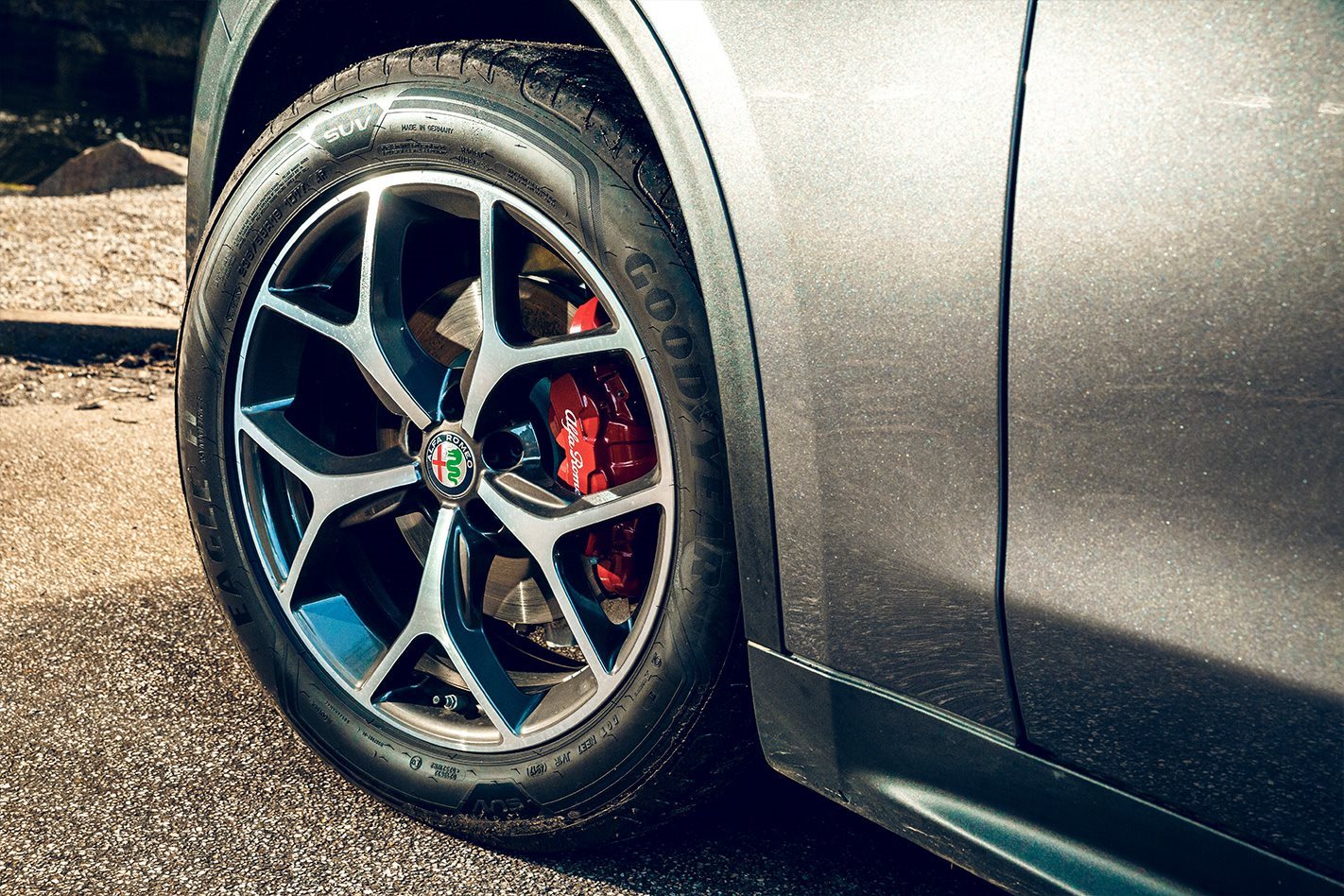 Gunning for a piece of the SUV pie usually points to one thing – wanting more women behind the Anonima Lombarda Fabbrica Automobili Snake-stamped wheel. So yes, Alfa Romeo’s intent with the Stelvio was to appeal to more women.

On the surface, the Stelvio’s interior appears quite masculine, but my main gripe of this car is the huge front A-pillar and compromised cabin vision. Because of the thickness of the pillar, combined with close, chunky side mirrors, there is a huge frontal blind spot going on here – which I found dangerous at intersections and even caused me a very close call with a tiny MX-5 on a roundabout.

Either a woman wasn’t consulted, or vision for those of small stature wasn’t even put into consideration.

I also wouldn’t call it a family SUV. Yes it has a pair of ISOFix points for the rear seats and a five-star ANCAP rating, but backseat vision gets pretty tight with that rounded-off body shape - small humans might get easily frustrated.

So who is this best made for? Well, car enthusiasts wanting an SUV with some sporty chutzpah, adventurers after an SUV that is at once stylish, sexy and not your run-of-the-mill make – I drove this Stelvio around for two weeks and didn’t once see a single other Stelvio on the road. Yes, it’s new,  but I love that this is a sort of object of desire, because, at the moment, these things seem to be few and far.

Is the Stelvio Diesel easy to live with?

This SUV is incredibly easy to live with. This is a true lifestyle car; headroom for grown adults in the back, well-bolstered seats for long drives, a sexy exterior and a take-me-anywhere attitude. From beach adventures with a carload of mates to carting my Great Dane X around town, I had no complaints from the rear seat – especially once I had pointed out the two USB port.

The boot capacity is a mild 525L (with seats up), but was more than enough for some suitcases and Christmas Presents- though, for your average family, it might prove a struggle.

Alfa Romeo’s infotainment system has certainly had an upgrade from the small Nintendo Game Boy-esque screens of past cars, but it is still super-easy to use with the centre dial – I particularly enjoyed the easy of the dial-driven in-built nav, compared with some of the other, cheaper makes on the market that use the QWERTY-style input.

The downside to Alfa’s system, which many people have pointed out on this site before, is the dinky reverse camera; which, when compared to its rivals, isn’t really of a luxury-car standard. 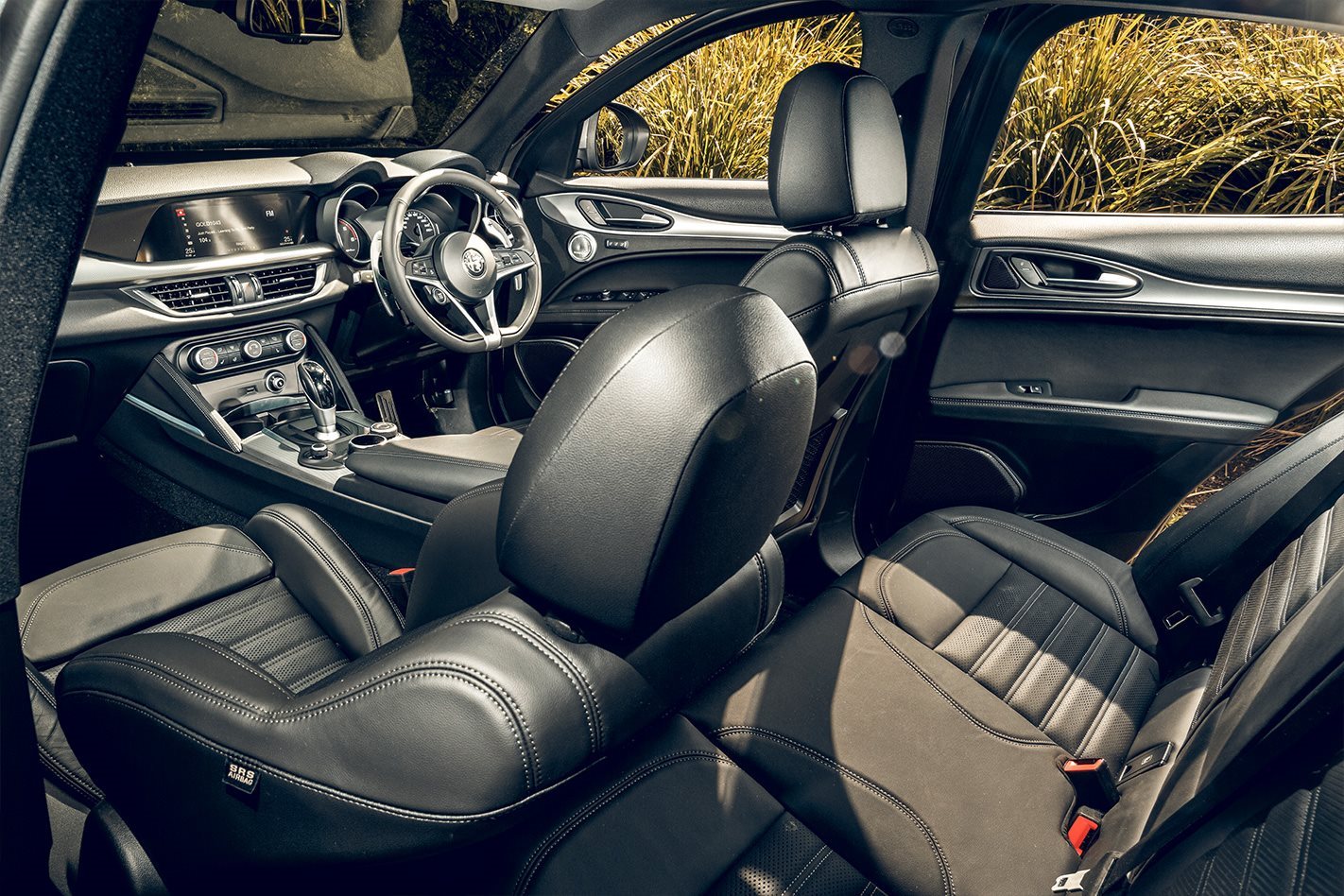 How well does the Stelvio Diesel drive?

Over two weeks, my average fuel consumption sat between 6.8L/100km (around town) and 8L/100km (on a long road trip) – keep in mind, the latter had me driving this on long stretches of highway, with some hill climbs thrown in. Alfa’s official thirst consumption rating is 4.8L/100km. I was still impressed with exactly how well it did, not to mention how quiet this diesel is. Actually, to be honest, the air conditioning’s weirdly deafening roar bothered me more than any road noise or engine noise could have.

The Stelvio is beautifully nimble, even with this donk. The silver paddles, analogue instruments and low centre of gravity give it this sexy, sports-driven sensory element, not often found in mid-sized SUVs- or at least, something that usually comes via gurgles of engine noise and right-foot plants.

That said, when driven in any other mode than Dynamic, despite its spritely 154kW/470Nm power/torque numbers, it was sluggish off the mark – devastatingly so. Let’s say I put those paddles and that eight-speed-gearbox to work with many a necessary downshift – but once you’re up there and in Dynamic, this thing is intuitive and sharp.

Just a day into my loan, I was flinging this 1660kg-ish thing around twisty turns, happily shocked to discover that it was nimble way beyond what it should be, quieter beyond what it should be and interestingly, snapping necks on the street more than I ever expected it to. I do think the latter comes down to its current esoteric status and bold, curvaceous shape.

We are overwhelmed with choice when it comes to uninspiring SUVs that are seemingly made to appeal to every... single... family’s desire. What Alfa has done here is make something that doesn’t punish the motoring enthusiast for needing/wanting/succumbing to the benefits that an AWD, mid-sized SUV provides.

While I have major gripes with some of the design cues, its non-performance drive modes and the fact it may not be the best family car around, it's almost a lock for for singles or couples wanting something nimble, sexy and dynamic that can tackle fun roads, carry a Great Dane in the back and get you from Sydney to Canberra on a single tank of fuel.

I’m actually, and somewhat shockingly, convinced that Alfa Romeo has actually achieved what it says it could with the Stelvio. And, to be honest, I kind of love its arrogance...