This article was first published in 2015.

I used to think of SUVs as the preserve of a demographic I did not fit into. I turned my nose up at the soccer mums, ladies of leisure, and nervous drivers who decided to combat their lack of confidence with a big, hulking vehicle and plough through their fears.

I like a lot of cars, but to my mind back then the term SUV only encompassed jacked up tanks with no performance credibility and bottom of the ladder eco ratings. I looked at them as symbols of status; a way to spend a lot of money and show other motorists how little you care about driving enjoyment, not to mention the environment.

Boy, how things change. Slowly the Australian love affair with SUVs blossomed. Demand started to soar and the market swelled with SUVs of all shapes and sizes. Dealers couldn’t keep up with demand for the most popular models and companies with no previous interest in high riding wagons started to develop their own.

With SUVs from the tiny to the tremendous now making their way onto the road en masse, I had to wonder whether there was something to this. So I called up Nissan and asked to borrow an X-Trail for an upcoming road trip.

The journey would take me and my wife from Melbourne to Sydney and back again. We had a lot of gear to take with us. A couple of Sydney friends had asked me to transport stuff to them, including one mate who wanted six pairs of wheels and tyres brought up for his race car. Sure, I said. 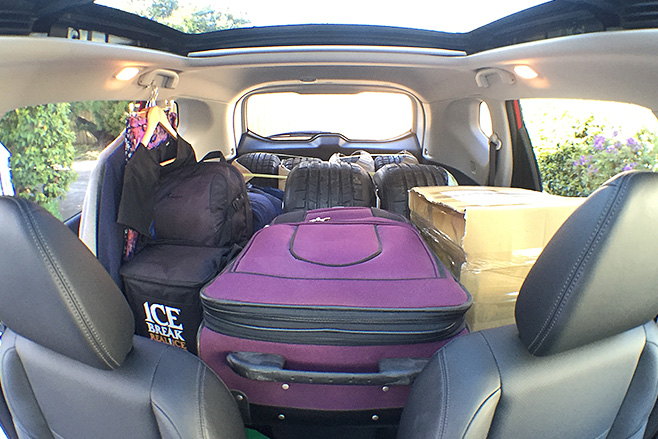 Having said that, the first thing I noticed is how much stuff you can cram inside it. I like to treat packing for a road trip as a personal challenge; a bit of real life Tetris. Six wheels and tyres, a couple of big suitcases (my wife thinks ‘travelling light’ is an astronomical term), birthday presents for family members, a few bags of food and other random accoutrements.

The X-Trail’s boot area is huge at almost 2,000 litres with the rear seats folded down, so it swallowed our substantial cargo without protest. But it’s an SUV; it should be able to at least do that, right?

Then we hit the highway. Sitting on the Hume for ten hours has its ups and downs. It’s not an exciting drive by any stretch of the imagination, but it can be cathartic. If you’re in something uncomfortable, or something that needs fuel every 20 minutes it can border on agonising.

Our X-Trail had a 2.5-litre petrol engine with CVT auto ‘box. Nissan claims fuel economy of 8.3L/100km but you never know what you’ll actually get. I expected the X-Trail to thunder through fuel unapologetically. But you know what? Nissan’s claim was pretty much bang on the mark. We actually used a little less than that, which isn’t bad at all. 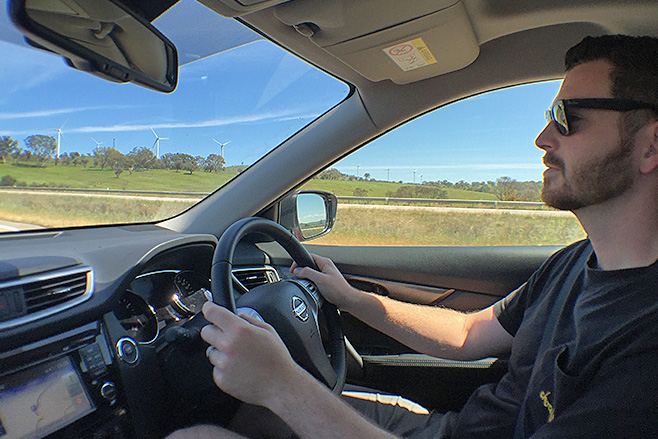 Sitting up higher and looking out the X-Trail’s big glass apertures with an easy-going ride made it feel like we were soaking up the kilometres with little effort. It felt far less fatiguing than usual and the trip seemed shorter. The X-Trail was starting to really make sense from a long haul driving perspective.

Read next: WhichCar do you live with? Nissan X-Trail

Before you know it, we’re pulling up in the driveway of my wife’s childhood home. My father-in-law wanders out to the car and says "that looks expensive!" and I guess it does, even though it isn’t really. You can get one for less than thirty grand with styling that defies its price point, evidently.

A day or two later my wife and I are on a morning jaunt to the old folks’ home. We’re picking up her 95-year-old grandmother and taking her out for a cup of tea and some lemon meringue pie. How lovely. There was concern she wouldn’t like the X-Trail, but she’s an open-minded lass. The high hip point was, in fact, perfect for her. Getting in to and out of the front seat was a piece of cake.

The rest of our time in Sydney provided a few more moments for the X-Trail to earn my respect. Parking it on a gravel hill at an event was all too easy. No wincing or grimacing while driving over course dips and humps, just point it up the hill and go. Giving four mates a lift home from a catch-up dinner in the city? No sweat. It wasn’t even that hard to find a spot for it on a crowded inner-east street.

Okay, I get it. This is probably the most flexible car I have ever taken on a road trip. It’s a Swiss army knife of a vehicle. It may lack the dynamic qualities of a sporty sedan or hatchback, but I can’t ignore the practicalities of this type of car any longer. My qualm about fuel usage in the current generation of SUVs was also misguided.

To all of you out there who figured this out a while ago, I apologise. It seems those soccer mums may share a thing or two with hipsters. They were into SUVs before they were cool. Just don’t tell them they were right all this time.