There are some important differences, of course. The Czech brand’s sedan is actually a liftback, and both it and the wagon version are built on a platform that’s front-drive or all-wheel drive, not rear-drive. And the Skoda’s engine line-up is exclusively four-cylinder and includes a diesel engine. 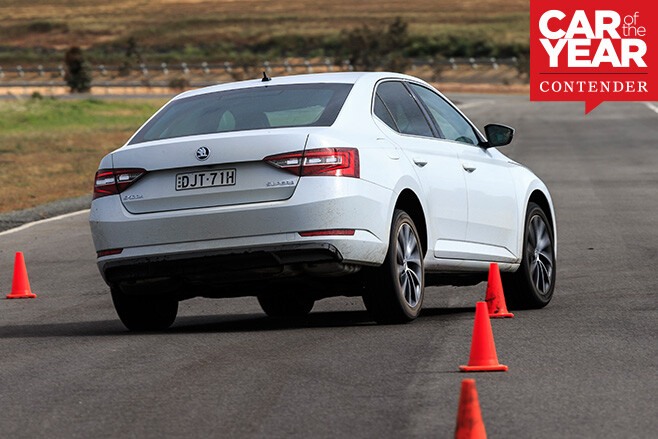 Performance isn’t a problem. The least expensive front-drive Superb costs $39,990 and packs a 162kW turbocharged 2.0-litre beneath its bonnet. It’s a $4000 step up from the 162TSI to the front-drive 140TDI, with its 140kW turbocharged 2.0-litre diesel. Topping the range is the $50,990 206TSI, featuring a 206kW turbo 2.0-litre petrol-burner and AWD. Throughout the line-up the wagon adds just $1700. All the engines are teamed with a six-speed dual-clutch transmission.

The power and torque of the front-drive Superbs, especially the 162TSI, can sometimes prove too much. Judges’ notebooks contain mentions of uncouth axle-tramp when accelerating from rest, and some even suggested the 162TSI would be a better car with less engine.

Once rolling, the most affordable Superb feels feisty. The gravelly but efficient 140TDI is almost as eager, but it’s the 206TSI that is easily the most impressive drive. Its all-wheel-drive tames the axle tramp and elevates the handling to another plane, especially on dirt, where Skoda’s ESC and ABS expertise was evident. Some judges thought the 206 TSI the dynamic equal of much more costly cars from VW Group stablemate Audi. Superb uses the same flexible MQB architecture that underpins a Volkswagen Golf VII, but stretched in every dimension. It’s a hugely roomy car inside, with massive cargo capacity.

Thanks to MQB, the Superb comes equipped standard with an up-to-date suite of sensor-based advanced safety and driver-aid systems, including active cruise control, plus good smartphone connectivity. ANCAP rates the Skoda a five-star car for crash safety, too.

But the car also includes plenty of much simpler but still surprising practical features. Best of these are the compact folding umbrellas stowed out of sight inside the front door trims. The brand’s slogan is ‘Simply Clever’, and the Czechs really do strive to live up to it. While well made, the interior is the place it’s most obvious how Skoda makes its cars more affordable. The materials aren’t as high-grade as those used in a VW, and the overall effect is sturdy functionality rather than everyman luxury. There are also some flaws to be found inside the Superb. Its front seats are seriously short of shoulder support. They don’t hold occupants securely in place at even moderate cornering speeds.

Dynamically, the Skoda should be better. The brand used to consistently engineer its cars for a sweeter-than-average blend of ride comfort and handling. The roads of the Czech Republic are often as awful as Australia’s, so cars that worked for Skoda at home were fine here. But the new Superb has a too-firm ride and the stiffness doesn’t appreciably enhance handling. Adaptive dampers do improve things, but they’re part of a $3400-$4700 Tech Pack option bundle.

Still, most judges would endorse the sentiment expressed in the notebook of Alex Inwood. “Don’t buy an SUV, buy this instead.”