If you’ve been to a motor show lately, you’ll have seen a concept car. These days, we tend to look at them and think: Oh, that’s nice. But I bet it’ll never be built.

This feature was originally published in MOTOR’s January 2012 issue

And you’d (mostly) be right. And even if the concept in question does make it to production, chances are it won’t look anything like it did on the show stand. 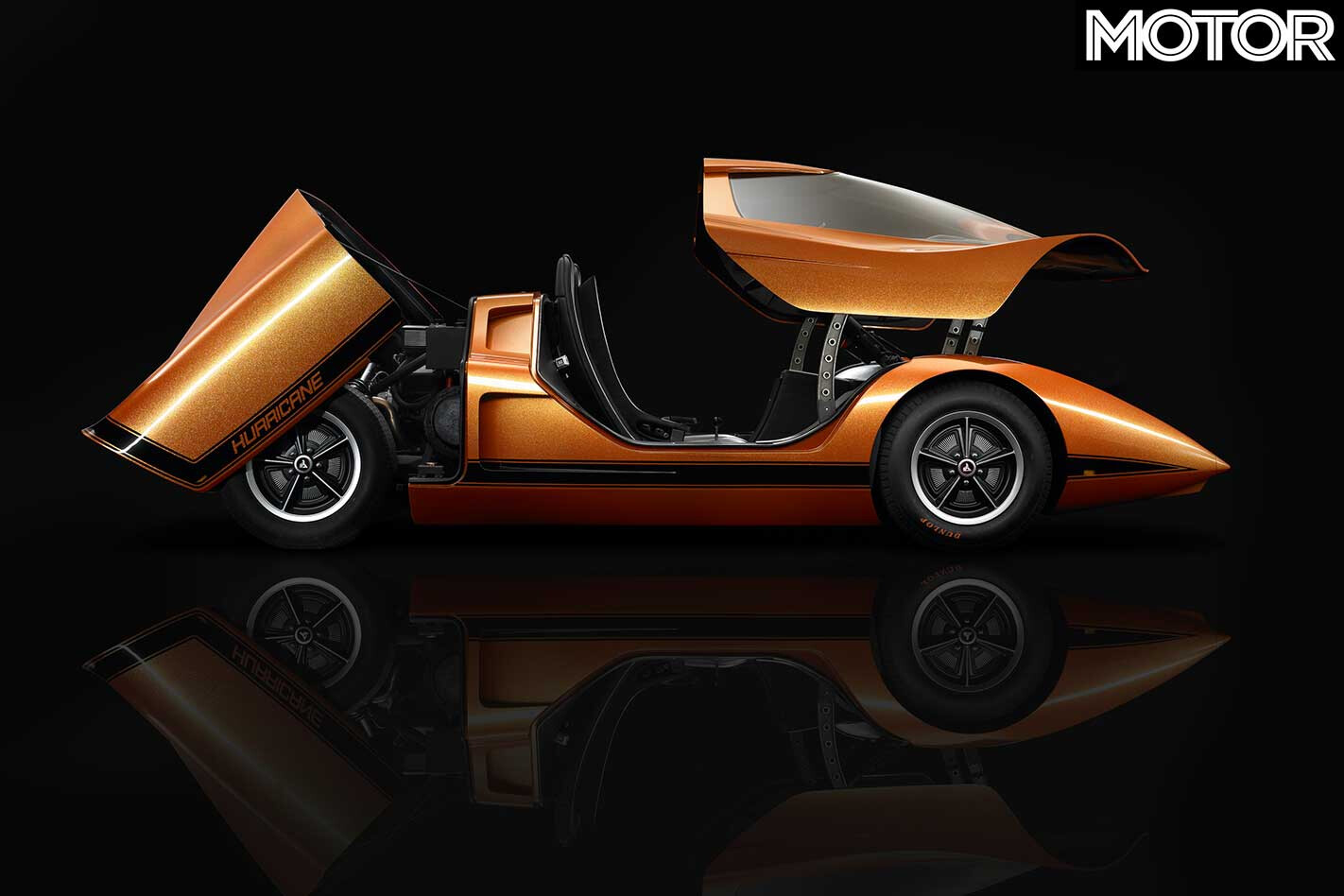 In a way, the Holden Hurricane you see here is another example of how it all works. See, the Hurricane never made it to production in the first place, let alone in a watered-down form.  But that’s the only thing the Hurricane shares with modern show-stoppers, because back in 1969 when it hit the front page, the Hurricane was more than a glimpse at how clever Holden could be, it was a dead-set window to the future.

Okay, in some respects it turned out to be a future that didn’t eventuate, but back then, we didn’t know as much as we did today and, as a result, concept cars – even wild ones like this - were firmly in the realm of the possible.

And he’s spot on. See, in an industry without a deep knowledge of what was technically possible, what consumers would really pay for and without too much of a worry about the environment, motoring’s horizons were a long way off in '69. And the Holden Hurricane was not only proof of that, it was taken very seriously indeed.

And without wishing to paint the good people of 60s Australia as simpletons, the black and white world of 1969 was a very different place. For instance, back when the Hurricane broke cover, the Apollo 11 mission was still weeks away from landing Neil Armstrong and his buddies on the moon.

Holden as a car-maker was just 21 years old (an EH Holden was still a five-year-old usdie) and the Hurricane was the world’s first peek at the locally-designed V8 engine. Your average Holden still didn’t come with carpets and had to be unlocked with the key, one door at a time. Hell, even the famous Melways Melbourne street directory was in just its third edition.

And then along comes the Hurricane with on-board navigation. The nice people at Melways must have had a cow.

But there was more…much more. The Hurricane didn’t have doors, it had a canopy that rose on hydraulic struts. It had disc brakes at each end and they were even oil cooled.  And at a point in history when the Lamborghini Miura was re-writing the supercar blueprint with its mid-engine and transaxle gearbox, the Hurricane featured exactly the same layout.

There was air-conditioning (which it needed because there were no opening windows) and the whole thing smelled of Dan Dare and Buck Rogers (ask your grandad). Even Mike Simcoe admits it was a 'spaceship’.

But that’s selling it a little short because for the stuff like the Perspex canopy that didn’t get up, some vital elements really did point the way for future Holdens. Take the on-board navigation, for instance.

At a time when the only satellites whizzing around the planet were The Moon or covert military jobbies hoisted up there by the superpowers at the height of the cold war, the Hurricane obviously couldn’t tap into those.

So, instead, it used a system based on magnets which flashed directions to the driver via a screen on the dashboard. Sound like a familiar interface? Apparently, the military still uses the Pathfinder system, as it became known, in some form.

And what about the Hurricane’s inertia reel seat-belts at a point in automotive history when ye olde lap-sash units were just becoming standard kit. In the front only.

And Australia was leading the world in this stuff. Because the Hurricane had no rear window, Holden pre-empted the SUV market by a good few decades by installing a reversing camera. Okay, it was actually a closed-circuit TV set-up, but it did the same job.

The engine was a prototype version of the good old 253 cubic-inch (4.2 litre) V8. With a pair of valves per cylinder and all cast-iron construction it was middle-of-the-road tech for the time, but in Hurricane spec it made a healthy 300 horsepower compared with about 150 horsepower (on a good day) when it finally reached production that same year and found its way into the engine bays of HT Kingswoods and (mainly) Premiers.

The transaxle was more exotic but rather than simply opt for a buy-in like a Porsche five-speed unit, Holden actually made from scratch a transaxle based on the standard four-speed manual fitted optionally to its production cars. Nobody I’ve talked to can remember who did this, but rest assured it’d be one hell of a job and the blokes/blokettes involved deserve big respect.

The oil-cooled disc brakes were another in-house design and even the alloy wheels were cast within the family to a design specific to the Hurricane.

Funny thing is, while we now expect everything from concept show cars to race cars and even flash road cars to be transported in fully enclosed, dust-proof big-rigs, the Hurricane was hauled around on nothing more exotic than an open trailer towed by whatever the experimental department had lying around at the time.

And you can forget high-tech laser-lit show stands and unfeasibly skinny girls in lycra pyjamas, the Hurricane was set up for display at not just big city car shows, but also regional events and dozens of agricultural shows where it often featured in the pig-judging shed.

In fact, it was in just such `an old cow shed’ that a much younger Mike Simcoe recalls seeing the Hurricane for the first time at the Royal Melbourne Show of 1969.

MOREMike Simcoe, from Melbourne to Motown

Of course, like anything else that relies on its gee-whiz factor to earn its keep, the Hurricane eventually drifted out of Holden’s corporate consciousness and was shelved in a warehouse somewhere. It eventually found its way into a private collection on the NSW-Victorian border where it then sat for many years, covered in dust tucked up in a dark corner somewhere.

But eventually, somebody recognised the significance of the RD001 (its internal code-name) and it was dragged back to Melbourne in 2006. That was when a full-scale restoration by a team of true believers within Holden’s experimental department was started and the Hurricane was returned to its former unquestioned glory.

Some parts were missing and had to be remade and some of the well-meaning but less-than-perfect previous restoration work by a group of apprentices many years ago had to be undone before the project could proceed.

Even the original paint colour – that acid-trip metallic orange – was but a memory, but luckily, somebody from the company that mixed the paint back in 1969 recalled (or rediscovered) the formula and was able to brew up a new batch.

So anyway, there we were a few weeks ago when the rebuilt Hurricane was unveiled to a breathless public and hundreds of Holden employees who’d been given ten minutes off to come and watch the old girl be officially recommissioned.

We heard it fire up outside and then watched as it rolled into Holden’s head office main building. The canopy took an age to open and all the while, that sweet little V8 was idling away with a distinct cammy lope that probably sounded as good 40-plus years ago as it did that day.

I’m not one for applauding cars when they’re unveiled at motor shows and what-not, but I got ‘em out and banged ‘em together like a rube in a cow shed for the Hurricane.

Now I’m after Holden for a drive in the thing. I’m hopeful, too; probably about as hopeful it’ll happen as Holden is determined that it won’t.

But a man can dream can’t he? The fact that the Hurricane was ever built at suggests that, yes, he bloody well can. And bloody well ought to. 1 - Still the One
A one-off, you’ll never be next to another one at the lights. Plus it holds a super significant place in Holden history.

1 - Museum piece
The car’s cultural significance also means it’s almost too valuable to drive. It should be in a museum.

2 - Anonymity
It’s so rare that if you did drive one, no one would know what you’re in. That may be a plus for some people.

3 - Costs?
Repair costs? Getting the Hurricane insured or repaired should the worst happen to it would cost an absolute motza.

Okay, so the Hurricane was the first ever Holden concept car, but it sure as eggs wasn’t the last.

Other notables include the Torana GTR-based GTR-X which wasn’t as dramatically styled as the Hurricane but was probably a lot closer to a production reality. It used the LC GTR’s hot 186-cube inline six and four-speed box. I nearly got to drive it once, too, until some berk reporter from a TV station was given first go (aint that the way of things) and torched the clutch. Goose.

Then there was the Torana concept we saw in Sydney a few years back and who could forget the one that didn’t get away, the latter-day Monaro concept of the late 1990s that was so passionately received that Holden was virtually honour-bound to build the bugger.

Most recently, the motor show-stopper from Holden has been the Efijy, that mad, 40s/50s-inspired creation that recalls the lines of the second-ever production Holden, the FJ. And don’t tell me that it’s not the real deal because its body was made not from steel but from fibreglass…because so was the Hurricane’s.