IT IS WIDELY regarded that if you want to maintain a decent resale value for your car then an absolute must-avoid exterior colour is pink, while for interiors, white is known to be one of the worst colours to keep looking fresh – one uncapped pen or new pair of jeans and it is all over.

So it is almost comical that Holden committed both automotive faux pas in just one car for its 2004 Torana TT36 concept. Look beneath the polarising pink paint and hugely impractical upholstery and Holden might have been on to something that was less Malibu Stacey and more, well… Malibu.

At the time of its inception, the then Holden design director Mike Simcoe saw a mid-sized high-performance sedan-shaped gap in the line-up and set the wheels in motion to create a car to fill it. After Simcoe moved on to a new GM design role, the project reins were handed to Denney Mooney and the Torana TT36 became a reality. The brief was to design a high-performance rear-drive sedan that seated four adults in comfort with the exterior dimensions of a BMW 3 Series but the cabin space of a 5 Series.

As a starting point for the Torana TT36, none of the company’s VE Commodore Zeta (platform for the gorgeous Coupe 60 concept), Cadillac CTS Sigma and Pontiac Solstice Kappa platforms were found to be suitable, and in an almost unprecedented move, the team set about designing a completely new platform for the car. For its power-plant, Holden started with an Alloytech 3.6 V6 which explains the 36 element of its name, while a pair of Warner K04 turbos account for the TT part. The result? 280kW and 480Nm.

You might jokingly liken the interior to a Stormtrooper with its vast expanses of white, broken up by voids of black (and the odd splash of pink) but the design team actually admitted to being inspired by the Star Wars henchmen. 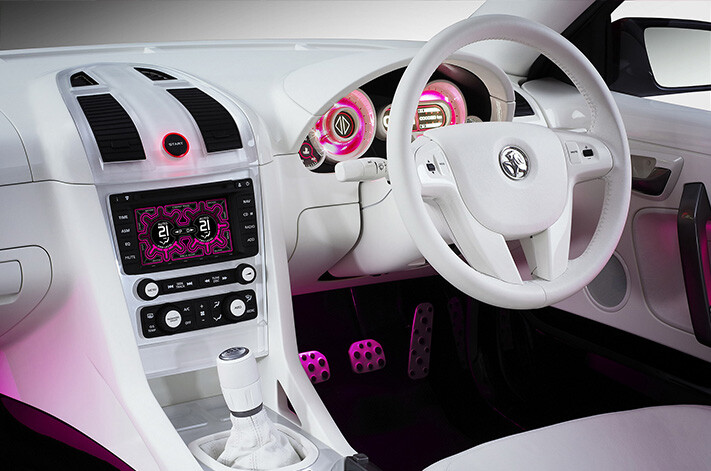 Like many of the prophetic concepts we have visited in this series, the Torana TT36 previewed a number of features that would one day make it to production, even if it would never be as a complete vehicle.

A turbocharged V6 would later power the Holden/Opel Insignia, the second row entertainment screens in the front-row headrests are now a common option in many high end cars, as is coloured mood lighting, albeit in a choice of colours – not just the Torana’s hot pink. A little bit of Star Wars was also woven into the instrument cluster and central digital entertainment display, with graphics and operation that was so far ahead of its time, we are still waiting (and hoping) for something as retro and individual.

Had the Torana been given the green light, it would have spawned an entire family of models and variants with the capacity to accommodate everything from a four-cylinder petrol, all the way up to a Commodore-toe-stepping V8.

Instead of a soporific and now forgotten Holden Malibu, the segment could still be alive and kicking with a potent rear-drive sedan with gorgeous looks if only the Torana TT36 had been pushed through to production.