Imitation is the greatest form of flattery, but in this case is imitation a big pile of disappointment?

I’d forgotten just how good the WRX STi is. First and foremost is the power thing. Oh yes. Not only in numbers but nature.

This feature was originally published in MOTOR’s February 2005 issue

Slot it into sixth and you can leave it there right over the Blue Mountains, floating from Homebush to Hartley. Paddle about, instead, and it’ll cut-and-thrust across the westbound ridgelines with the best of them. 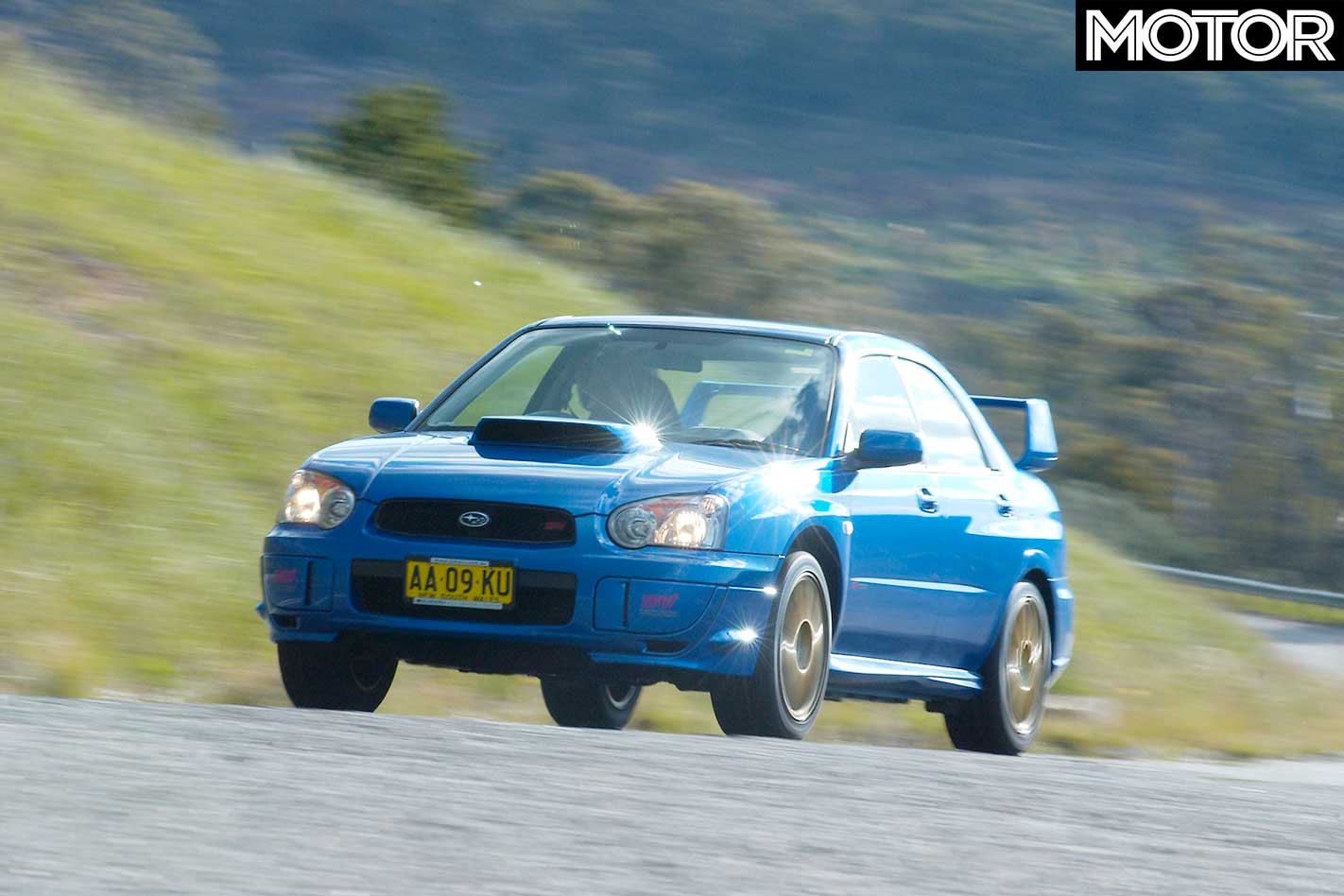 But stir its lovely, light, short-throw shifter around with sufficient zeal to keep the 195kW turbocharged boxer spinning above 4000rpm and it’s Game Over: the thing explodes like a hand-held bunger and carves like a four-door superbike.

Then there’s the steering; whip-quick, well-weighted and incorruptibly connected to semi-slick grippers that respond right now. And how did I forget about those brakes? Surely the lines are stainless braid; there’s just no other way they can feel so direct. Or the boy-racer detailing, like the Water Feature to make the intercooler cooler. Okay, the ride’s still choppy and the tyre noise is horrible but let’s be serious...

MOTOR Legends: The greatest Impreza ever

Its only shortfall is aesthetic: it’s a guppy-eyed and gormless little bugger and why anyone would take inspiration from its appearance is a complete mystery. But not to Kia’s young Australian sales manager, Justin Hirano, who whipped up the ‘Kia Rio Sport-Pac’ as a dealer-fit option for anyone drawn to Rex’s beauty but unmoved by its other virtues. As bloody if. 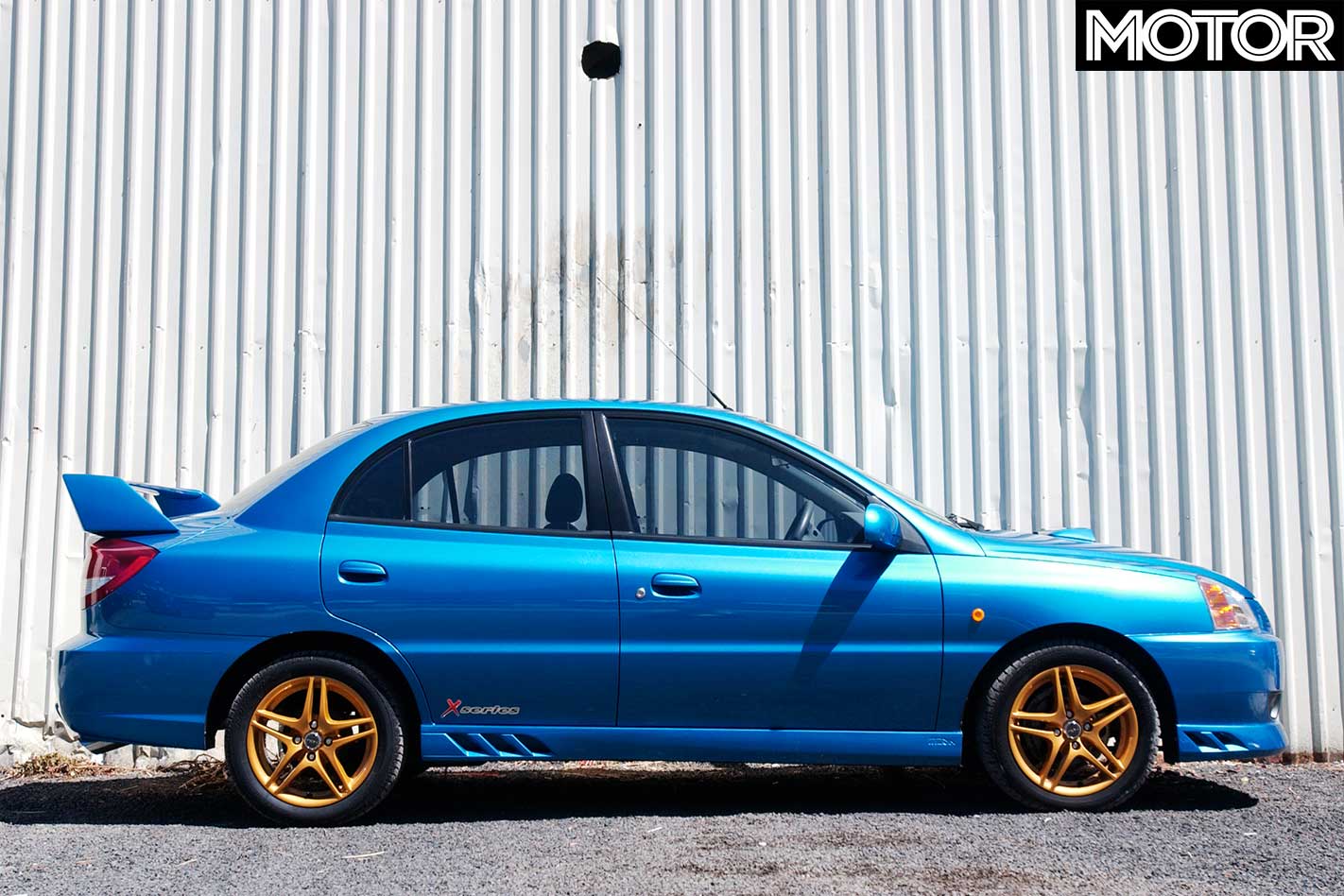 The thing is patently a deceit for the young ’n spotty, whippersnappers like Garry Morris, whose name we gain from the dealer who sold him one. And whom, armed with the Real Thing by way of illustration, I am most keen to enlighten.

Hence the journey inland where, in the carpark of the appointed eatery, we find the Bizarro World Suba-clone parked. And, placing the STi alongside it, the initial resemblance is eerie. The standard Kia ‘Rally Blue’ is a ringer for the Rex’s signature hue and the high wing, bonnet scoop and gold alloys all, for an instant, resonate. But the differences quickly surface.

In pictures: 30 years of STi

The Subaru, with its swollen arches and monstrous brakes, looks like Clark Kent on a bad-disguise day. The Kia, by contrast, is just in drag – the slots and scoops are dummies and its wheels have a two-inch shortfall and one nut less. Which figures. Because underneath all the rice-rocket cues is a Kia Rio, the Morris of our age, which, other than a little lowering, is unmodified in any way. 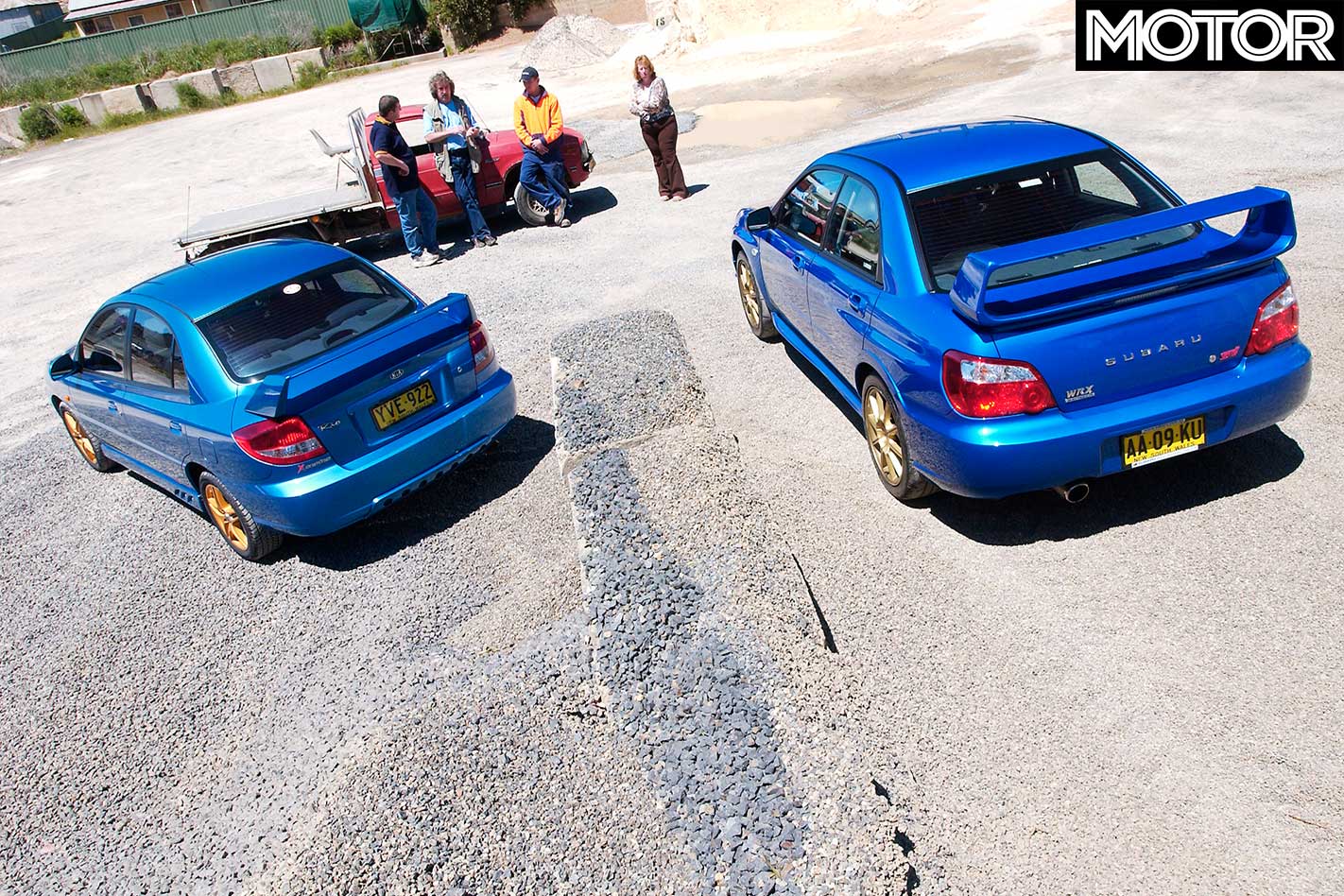 This primes the pump for a piss-take of tsunamic proportions until I meet its owner. Garry is 47. Garry is a fitter at a mid-west gold mine. Garry says “We’d thought about buying a Subaru” and then, glowing with a canny buyer’s pride, continues “but we saw this in the showroom and I thought ‘why would you wanna pay more?’” and I am, for the moment, silenced. 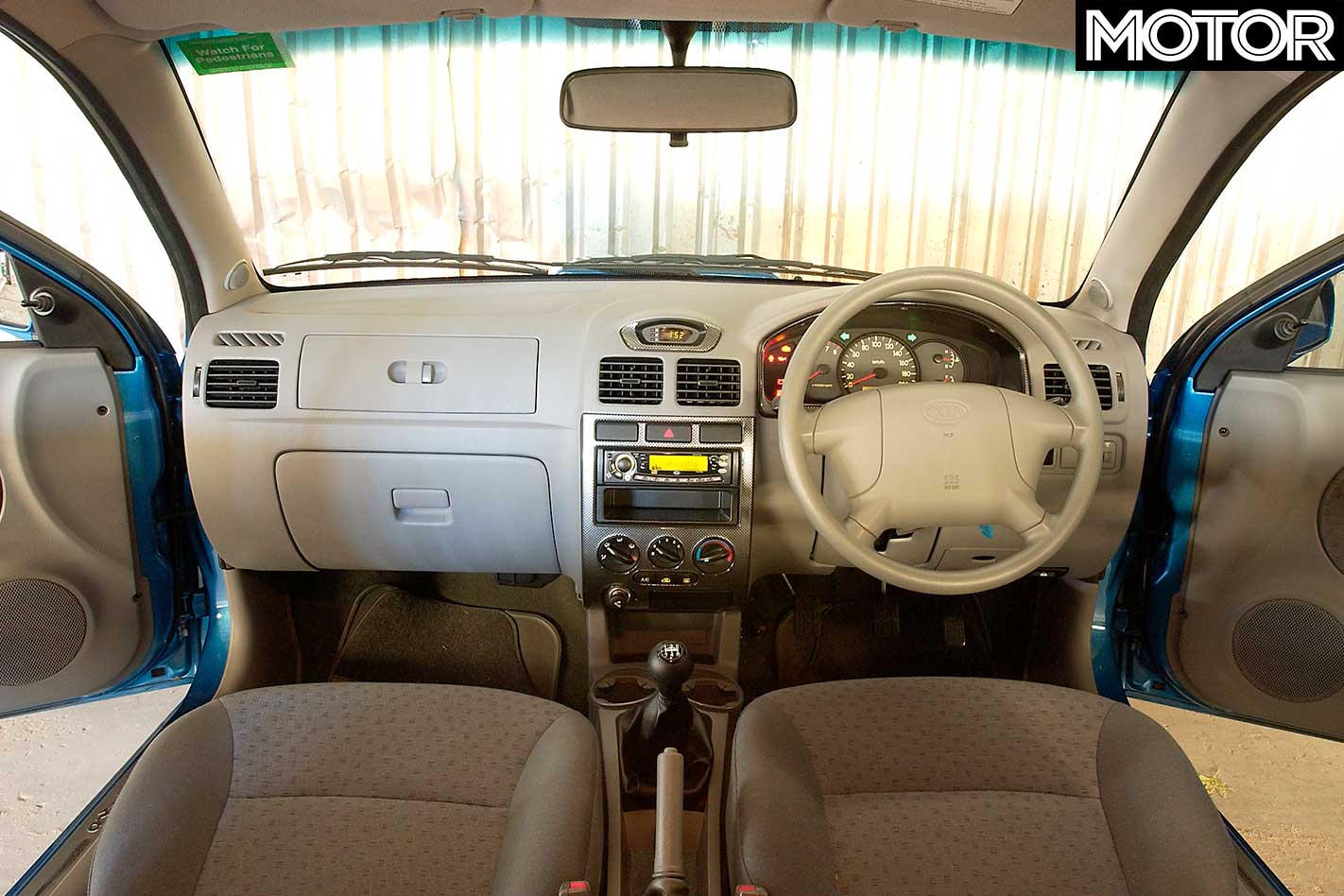 An unpleasantly fit man. Particularly solid. Best keep the eyebrows in the normal position when such things are said. Ditto when his friend, Janette, relates it storming Mount Victoria like a rally-car.

After all, they’ve added a sports muffler to make up for any dynamic deficit, so you never know. And neither, in great depth, does Garry: “I only drive it every now and then. We keep it as the Good Car.”
It’s hard-work country out here. Full of big blokes. We’ve got all day. Let someone else tell him...

So we seek out the strong and, in a stoneyard where we stop for photography, the young manager announces himself a big fan of Rexs. This’ll be good. But after his inspection of the pair the best we get is a slow “Well I’ll be buggered” as the truth dawns. He didn’t know? Nope.

Thought both were Subarus… with the Kia being the later model. It’s certainly the looker, he tells Garry of his pride and joy. Throw in the $18,400 on-the-road ask and it’s back-slappin’ time. 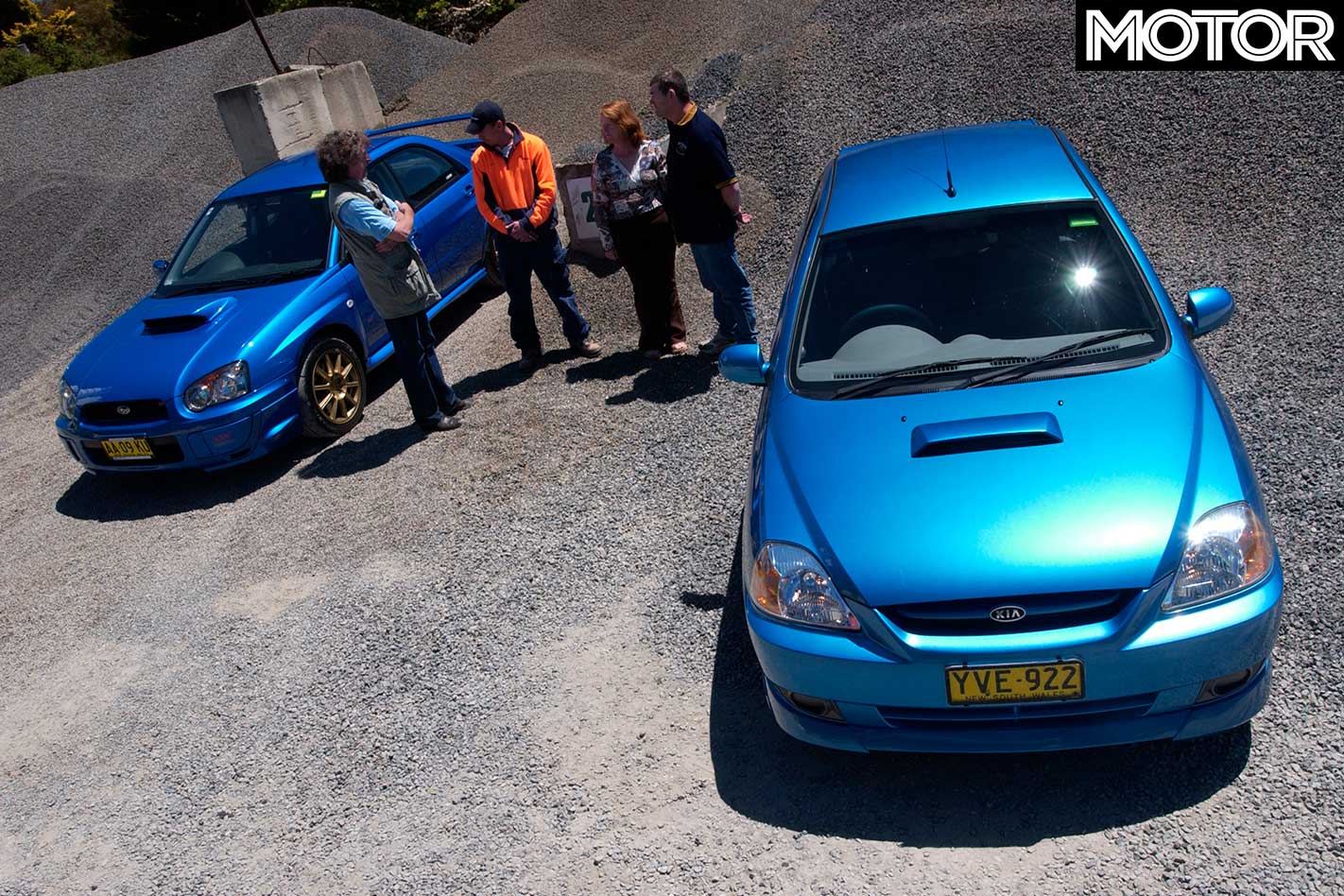 Photographer Wielecki’s eye leads us next to the corrugated rawness of the local bus company, which suits me just fine. The men here must know machinery well and will, doubtless, treat shortcomings harshly.

The first driver, Bob, views the contenders, and is charmed by the Kia’s perky exhaust note. Despite the Korean’s obvious sporting potential, however, Garry assures him that it’s given “not a moment’s trouble”, which rates really well with bus-drivers. Certainly more so than the STi’s maddening security keypad and cop-calling scoop. Kia gets the vote.

The next driver, another Bob as luck would have it, is even more pragmatic, and enquires as to fuel economy, mechanical complexity and insurance costs before deciding the Kia’s clear advantage in these matters outweighs any “unusable performance” advantage the Subaru may offer. 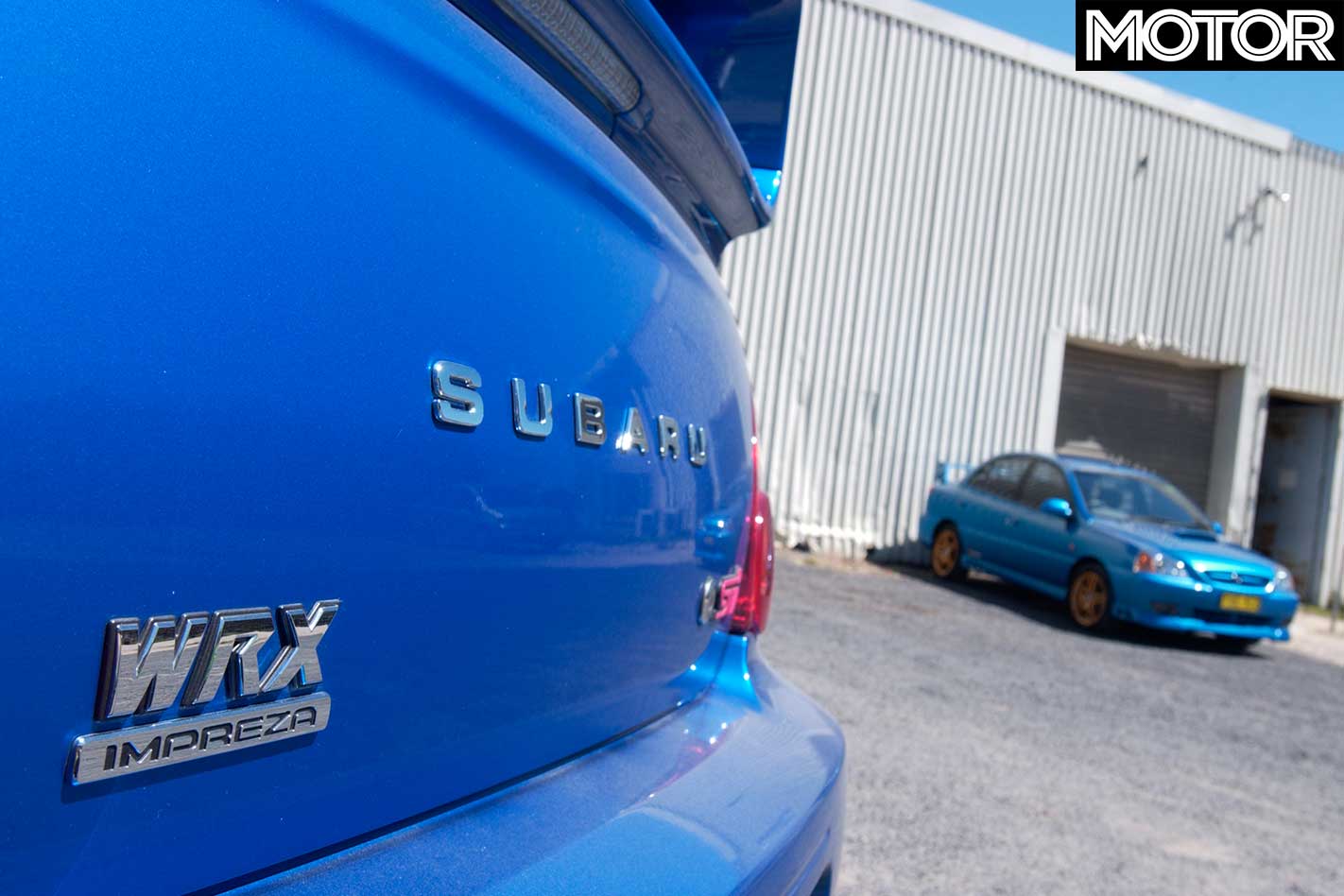 Only one bus-man, Phil, seems attracted, albeit modestly, to the WRX: “I’ll give you two-bob for that,” he offers, but having met both I’m not tempted. Let the record show that an apprentice casts another vote for the Subaru but as it’s “because you can’t beat German engineering” that one goes on the Informal pile.

Only one court of appeal remains. The Young, three of whom Wielecki lures into a Lithgow alley with an ease that mortifies. Carl, Mitch and James are introduced to the contenders, which promotes immediate excitement, and Garry, which doesn’t. The shape of Garry’s nose suggests both an interesting history and the inadvisability of enquiry. It certainly promotes a greater degree of interest in the Kia than might normally burden these strangers to moderation. 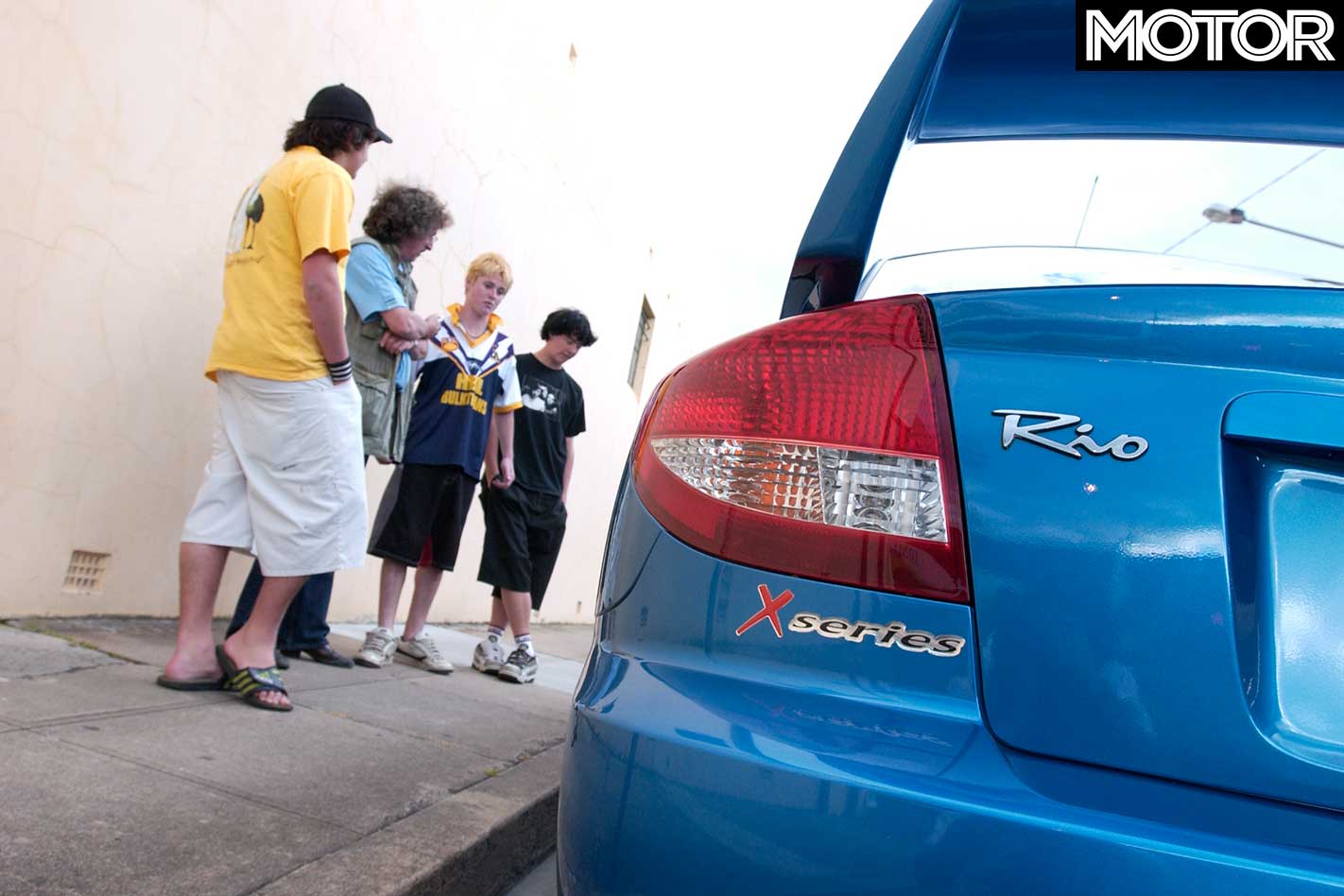 They are not discouraged by its unblown 1500cc 71kW engine and are much impressed by the 3:1 price advantage. But their eyes are darting. And lingering elsewhere. On a Subaru that, I am informed, is only one set of “huge-arsed chromes” short of perfection.

So when I finally ask the question the answer is honest:
“I’d take the WRX.”
“Even despite the price?”
“BUY? Oh, the Kia”

There are some things learnt only by experience, and in that fervent hope I suggest to Garry that we briefly exchange cars. Taking this as a request for the Kia, the Big Fella obliges without hesitation. 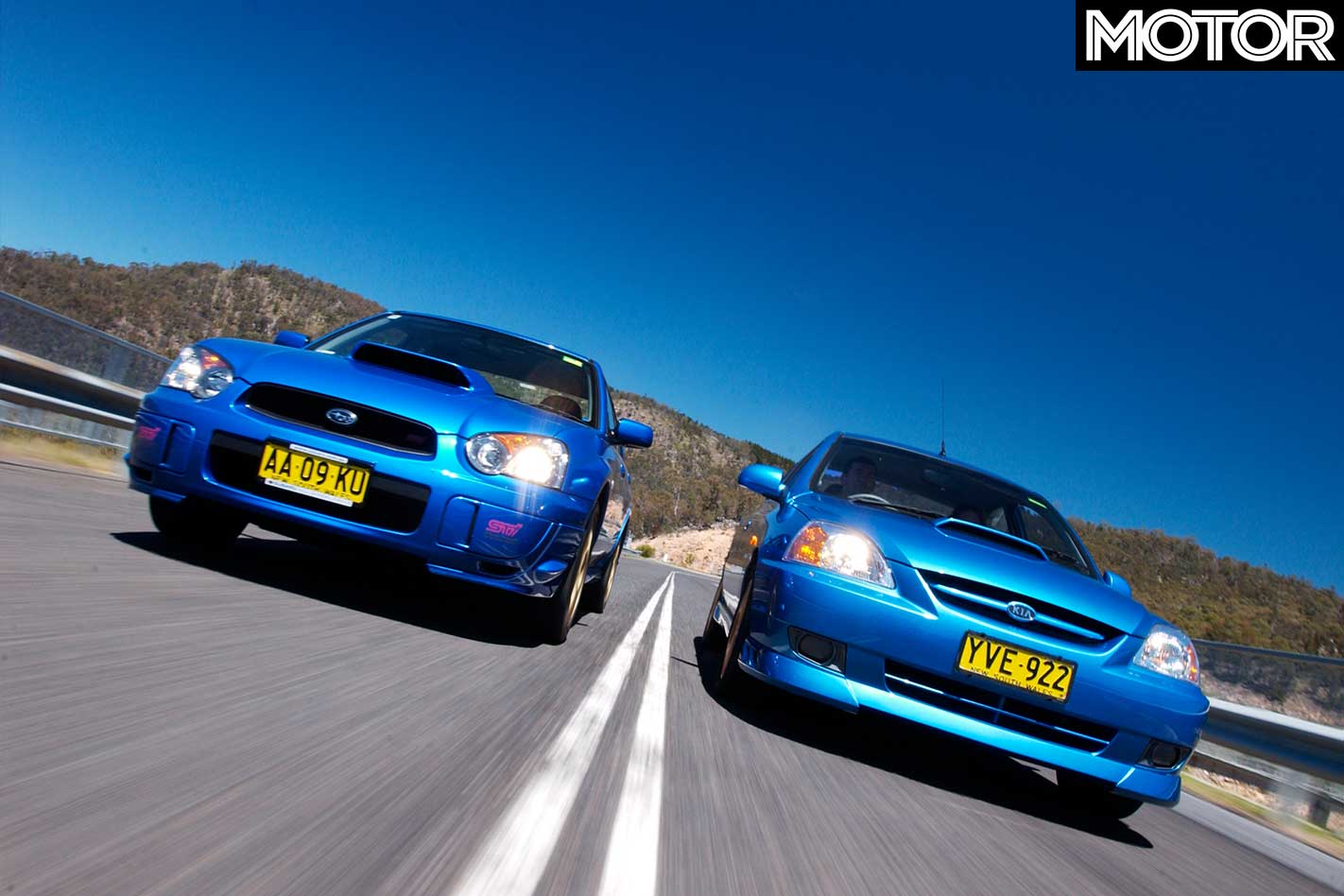 So, I go through the motions and find it, as expected, acceptable in most things and outstanding in none. Okay, the exhaust is fun and the motor works if you wind it up, but the difference in 0-100km/h times (11.3 vs 5.4 secs) is the same as the gap in chassis response. However, nothing else under $20,000 commands similar attention and, in that and all other regards, not one owner, fully aware of what they’re buying, will have cause for complaint.

More past blasts on classic MOTOR

Garry, conversely, climbs into the STi, applies his customary amount of throttle and instantly disappears. He comes back some time later with a very firm grip on the wheel and a noticeable case of big-eye.
“That… ah… That’s frightening,” he says quietly. 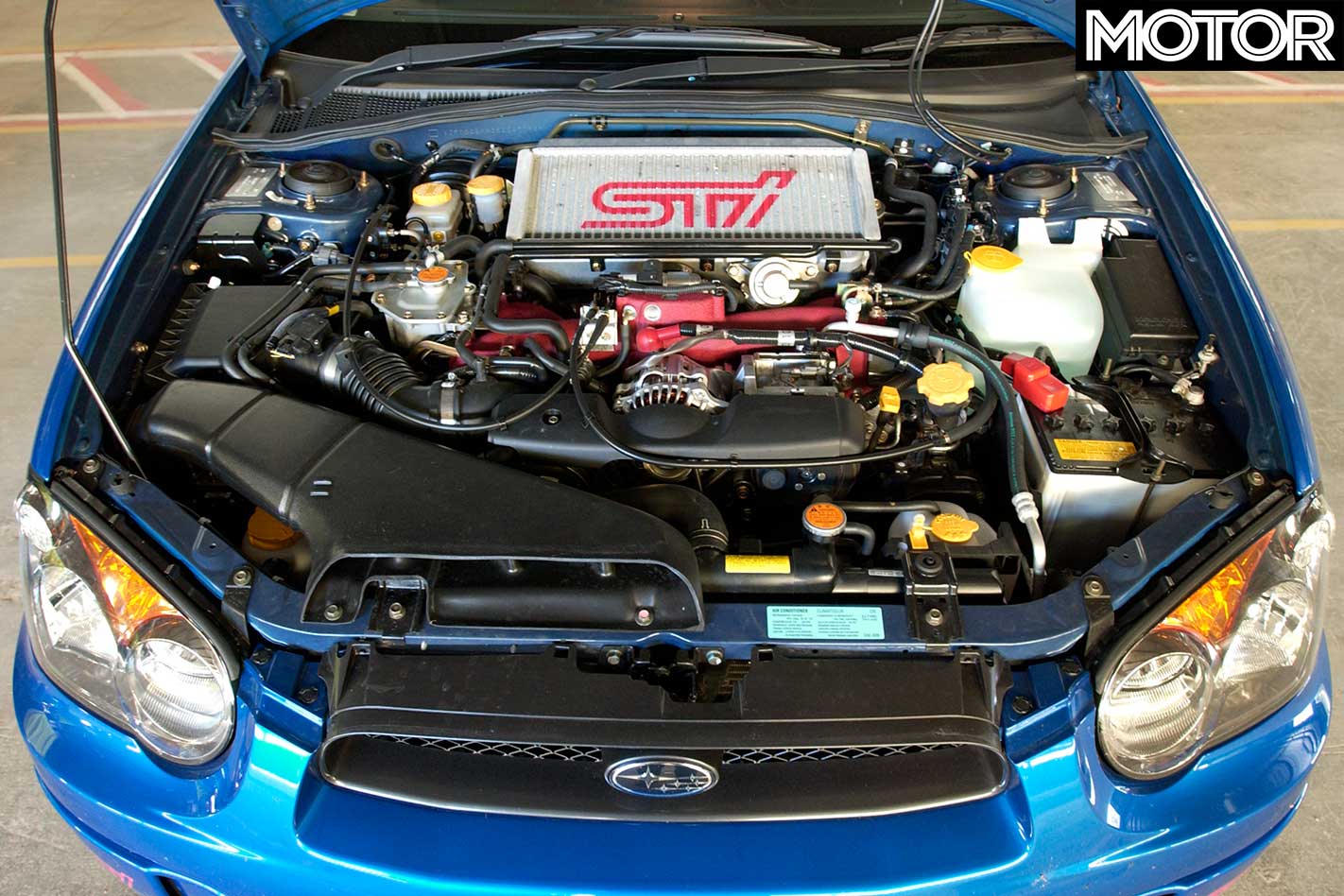 Belting homeward up Mount Victoria, tasting driving at its sweetest, I contemplate, between volcanic bursts of thrust, that so few souls seem to understand, GET OUT OF THE WAY, or cherish the STi. Or give it the respect it deserves.

Not one person has been offended by the Kia’s cheek and several have thought it admirable. I’m disappointed. And so, I fear, will be the Editorial Gods who sent me here for blood. And Kia’s Mr Hirano has ensured that a small number of unobservant ram-raiders are going to be very disappointed indeed. But not Garry. He’s happy. Because, journo-ravings aside, he knows there’s not much wrong with his Rio.

And that even if there is, no-one’s going to tell him. 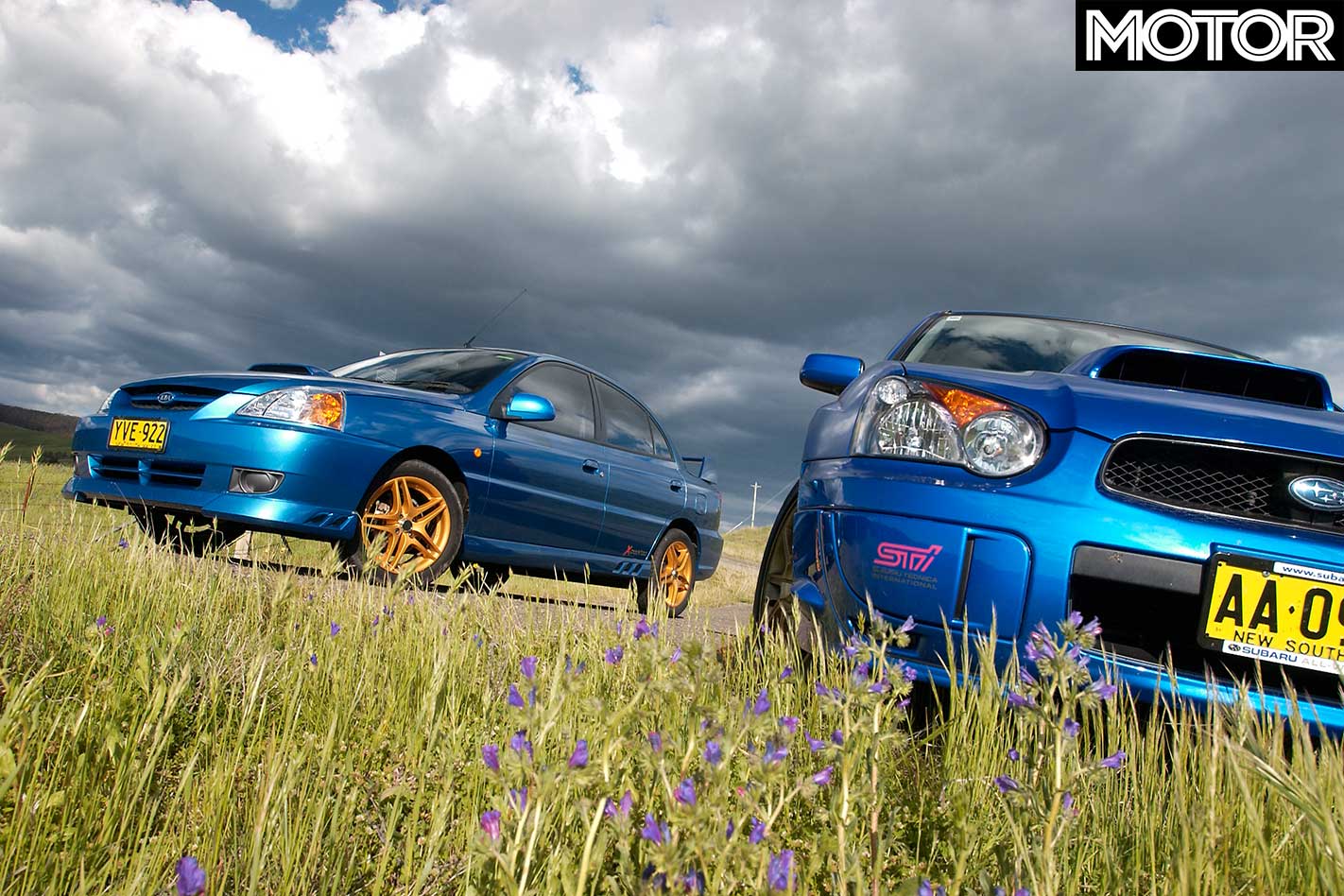 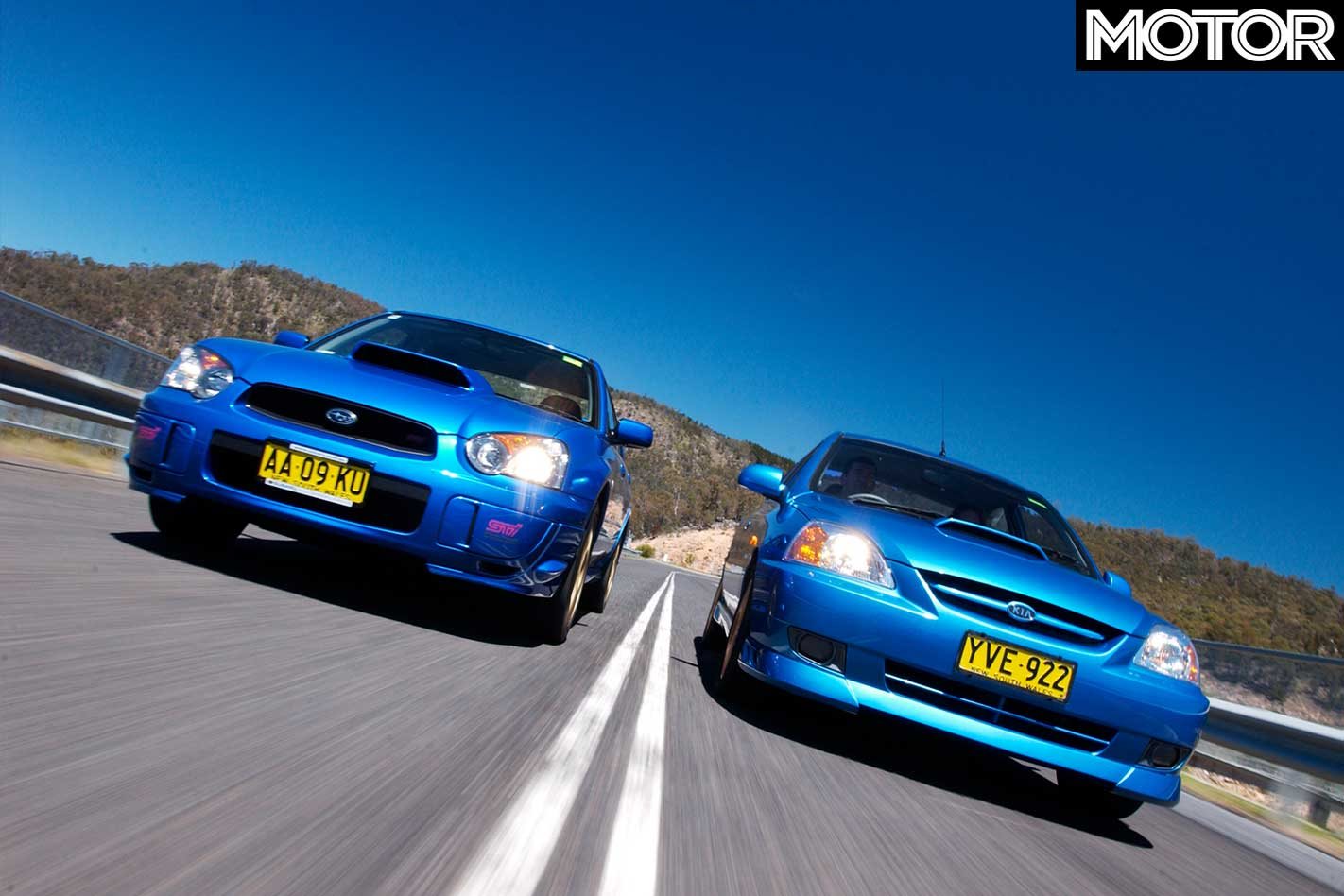 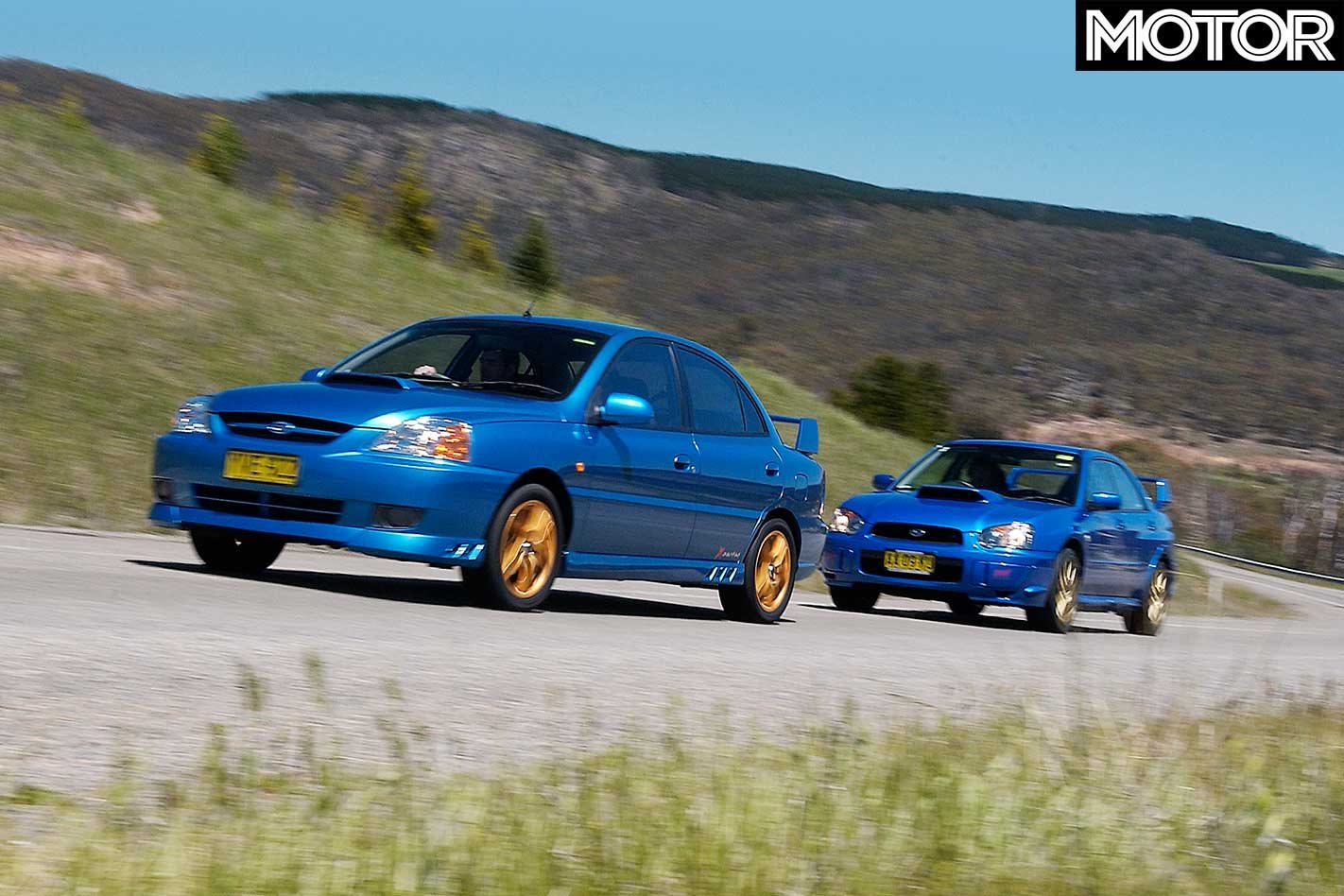 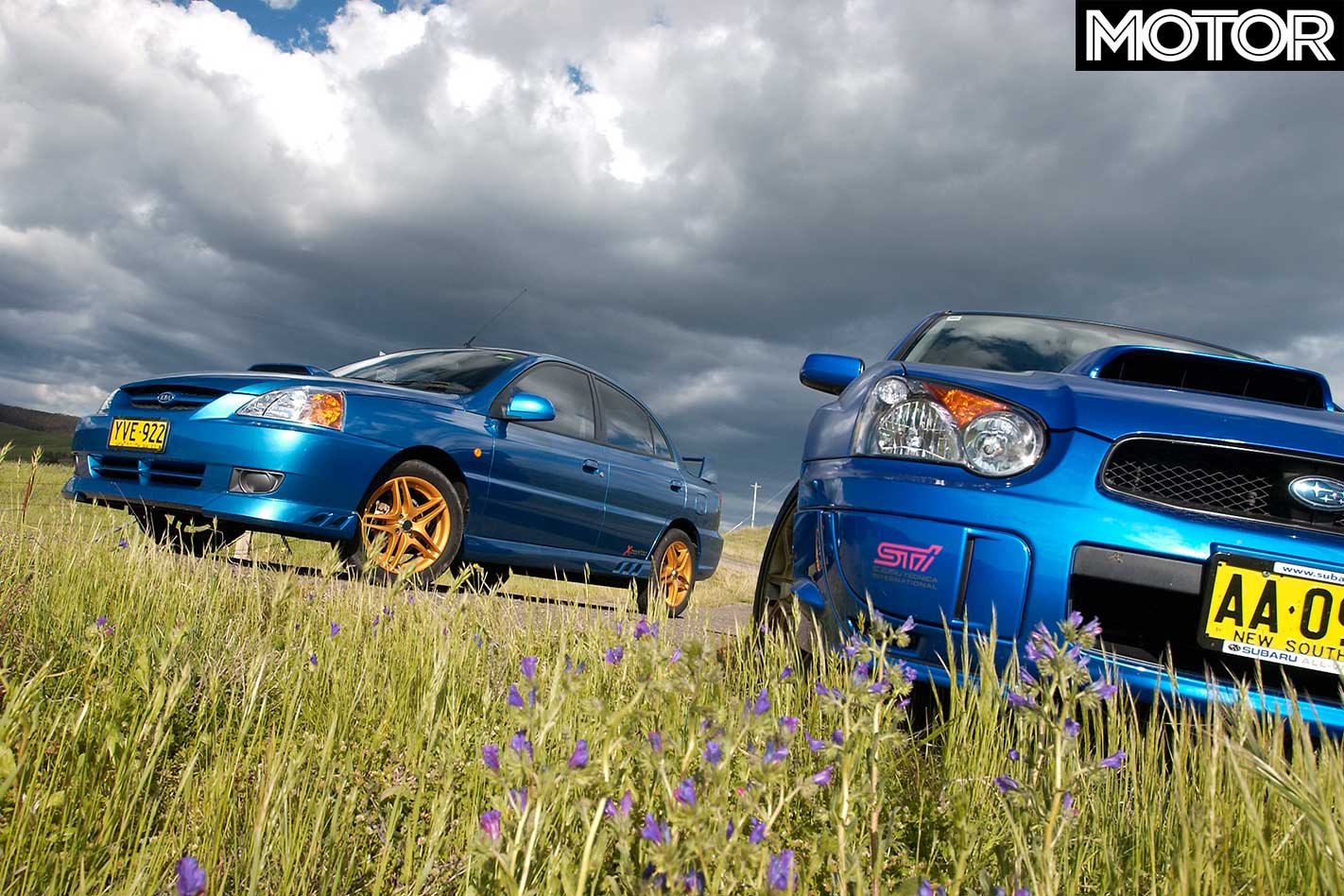 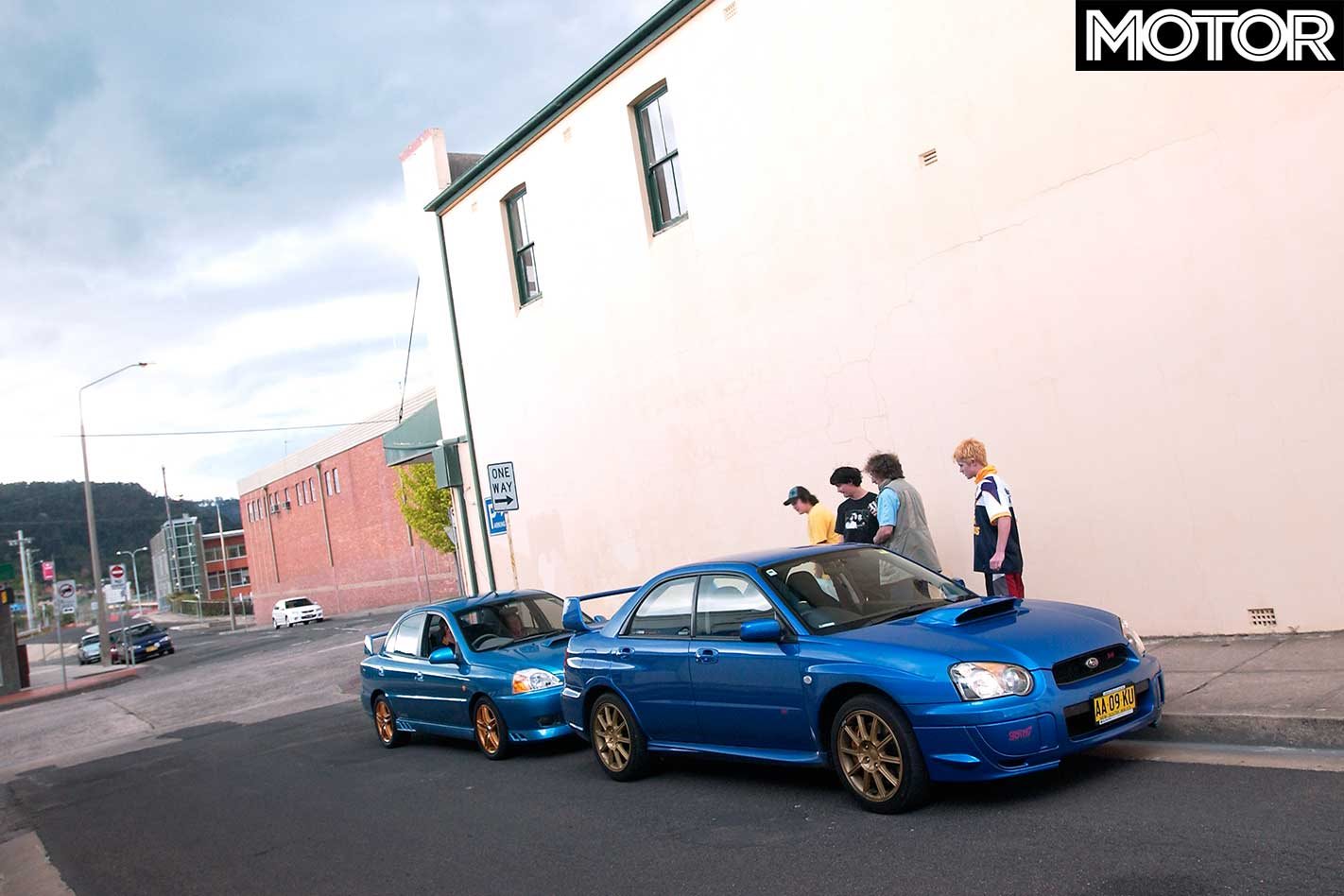 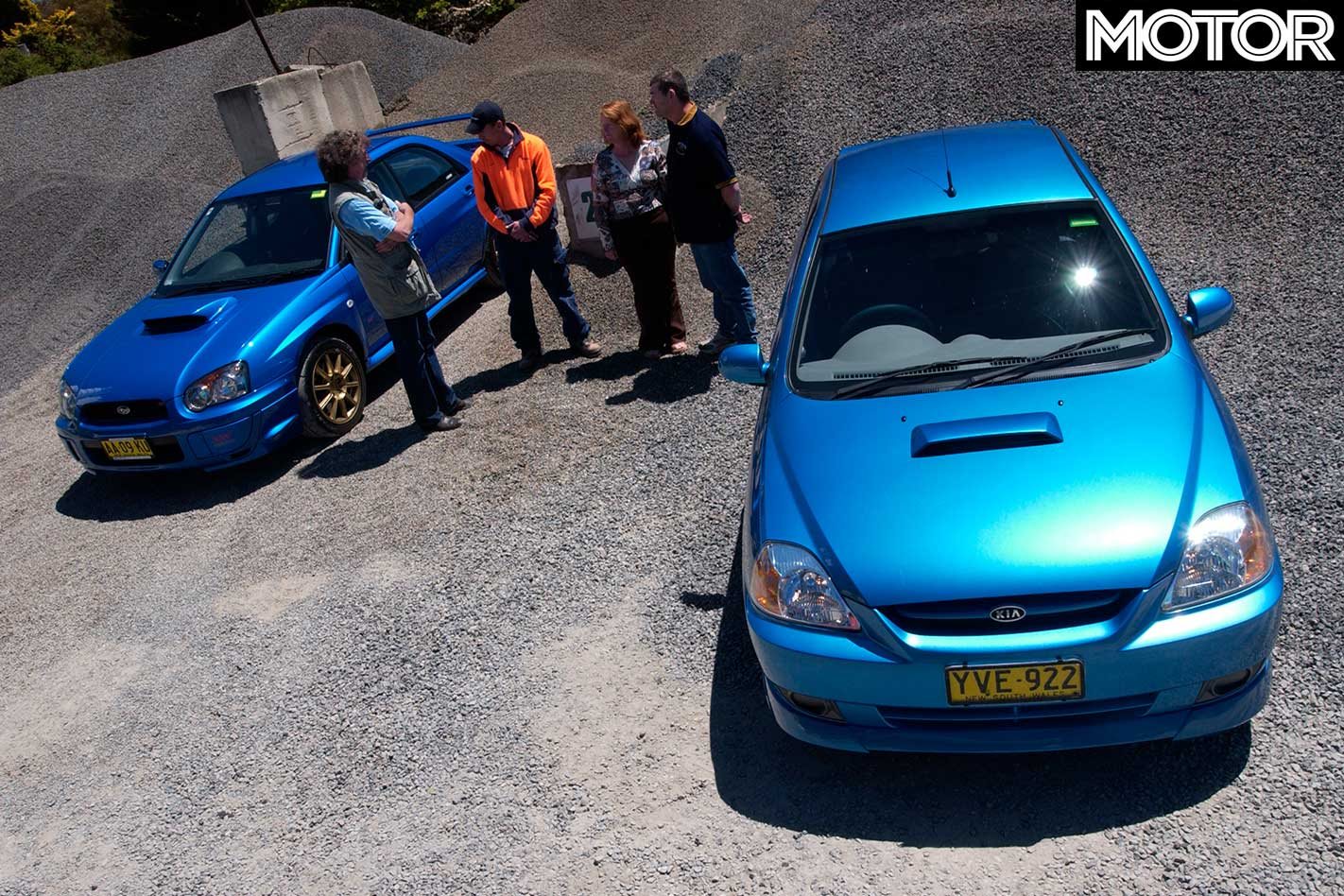 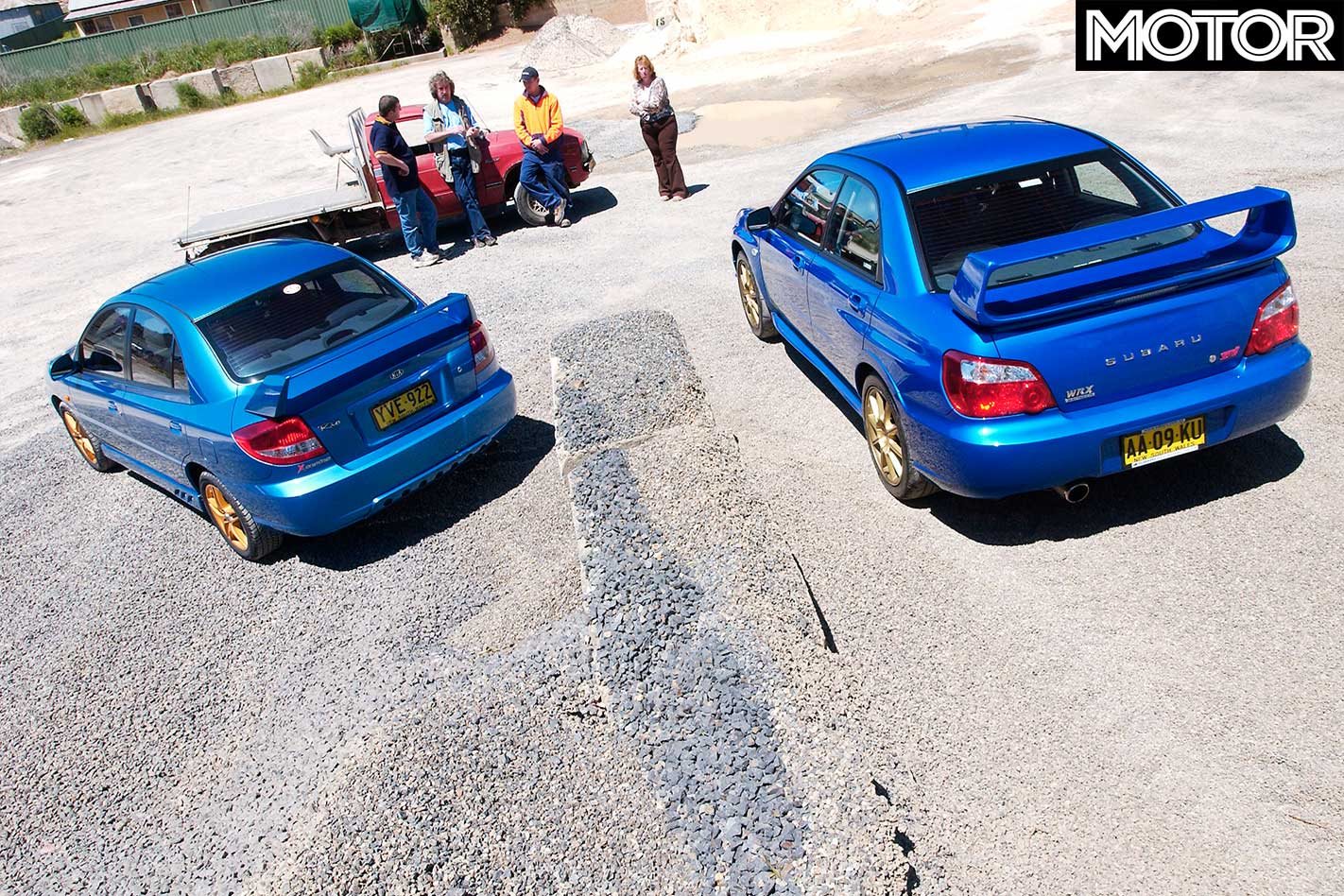 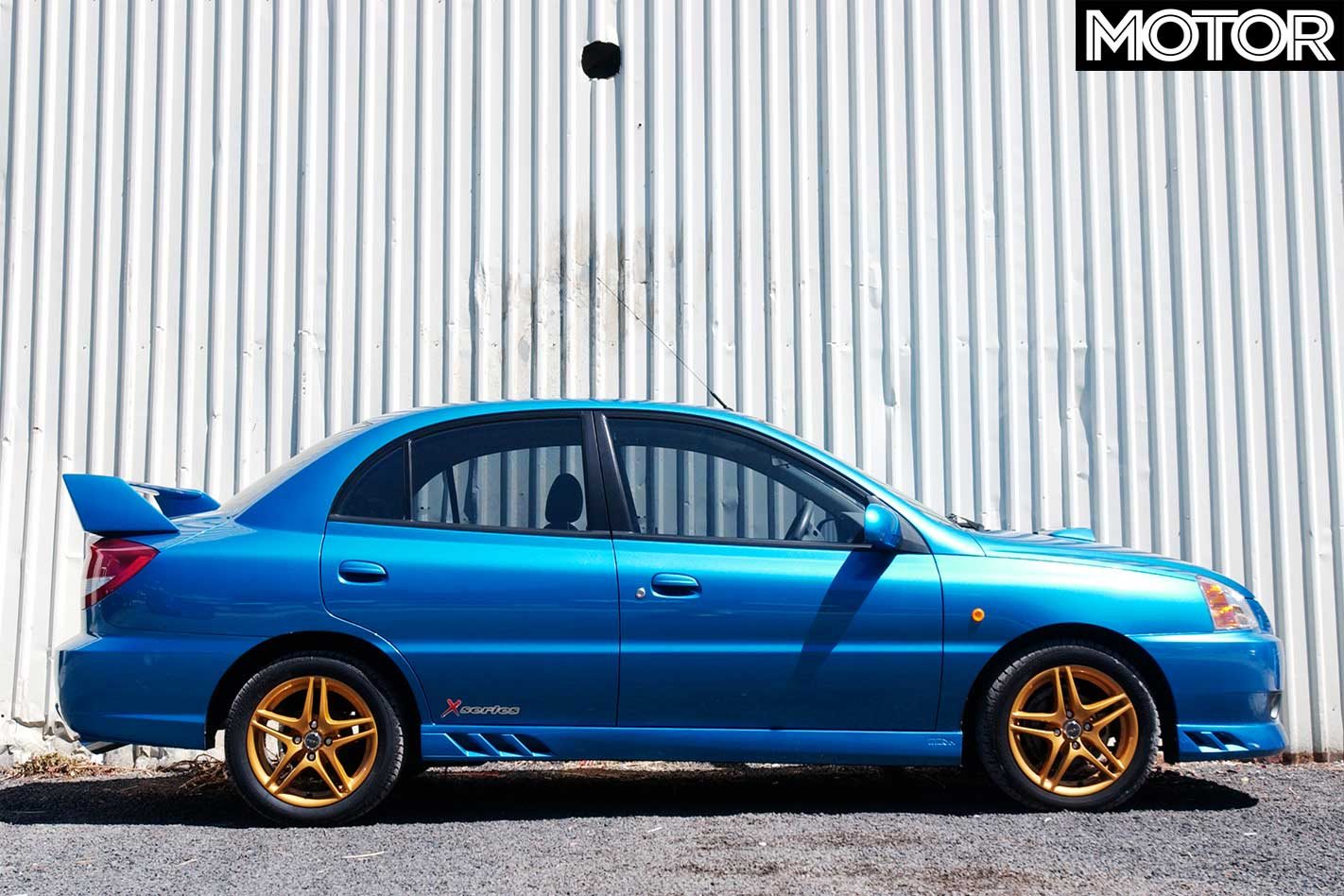 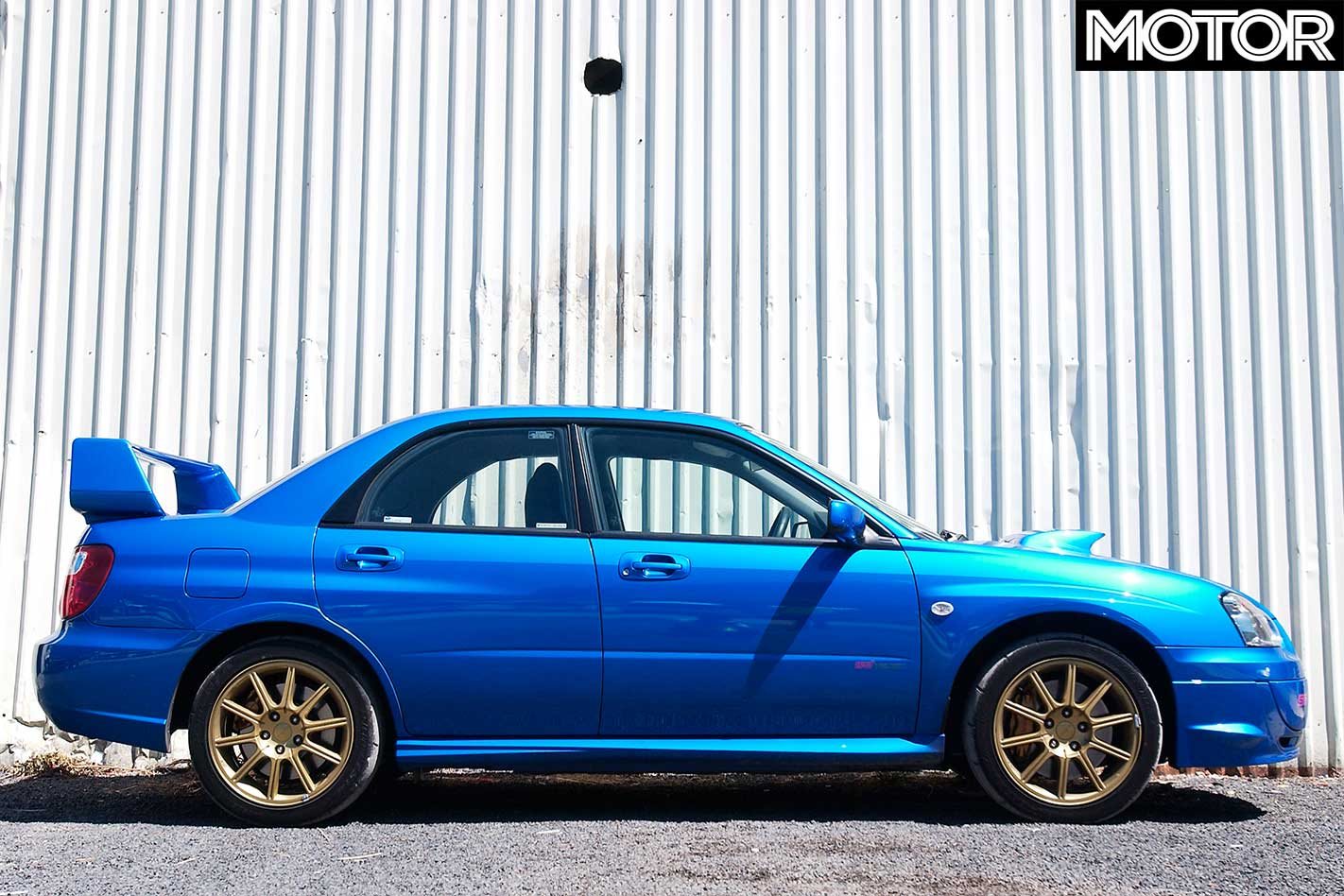 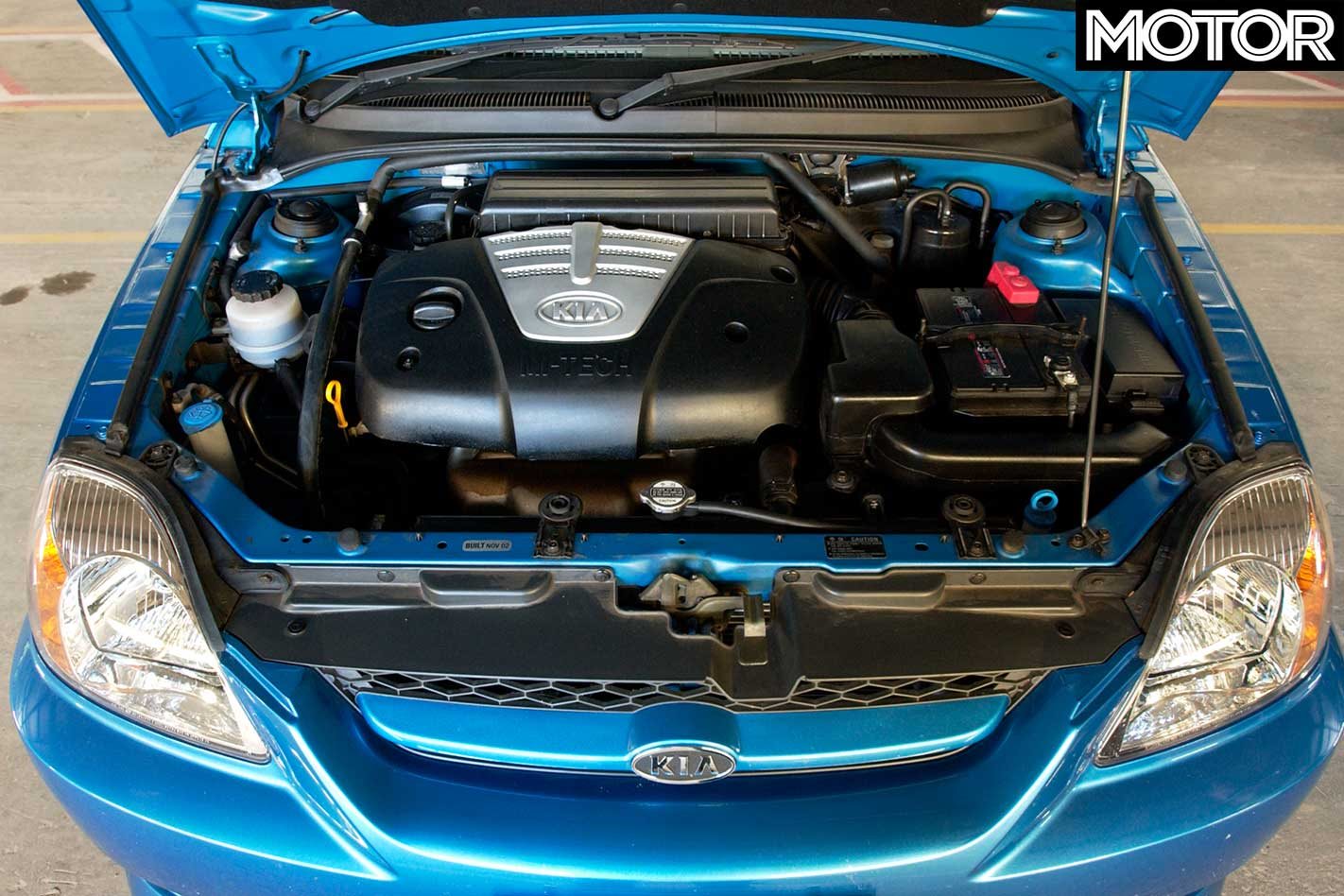 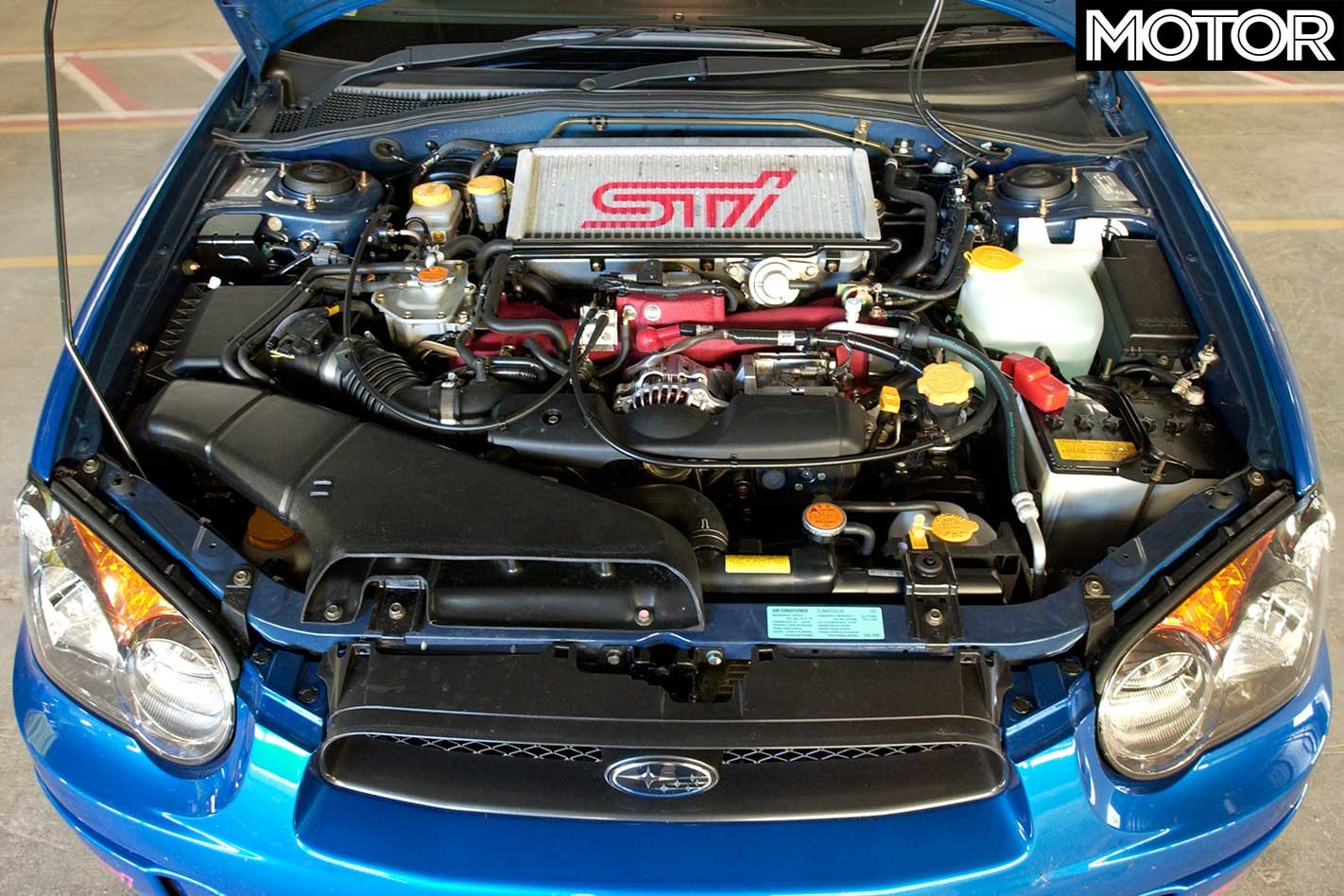 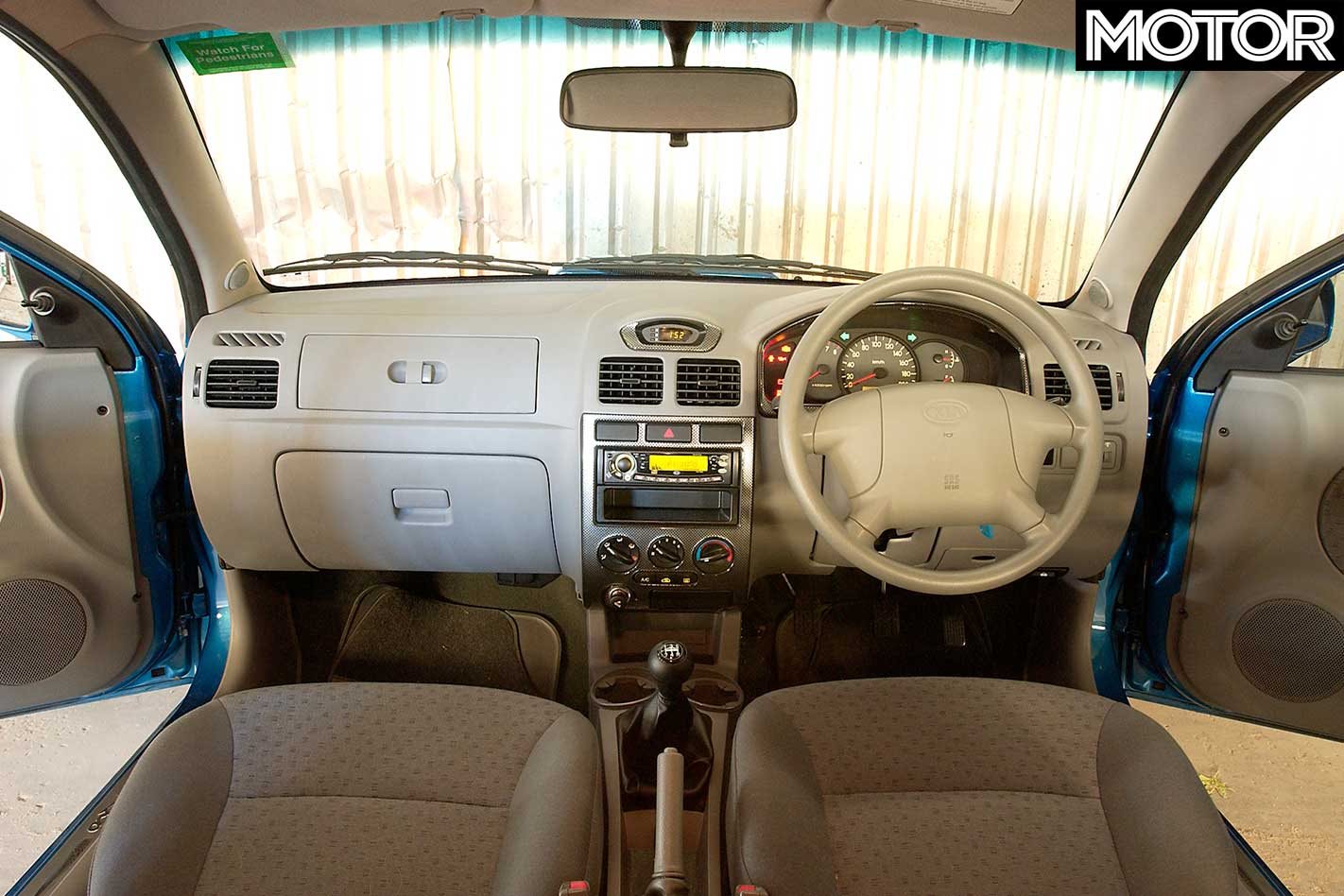 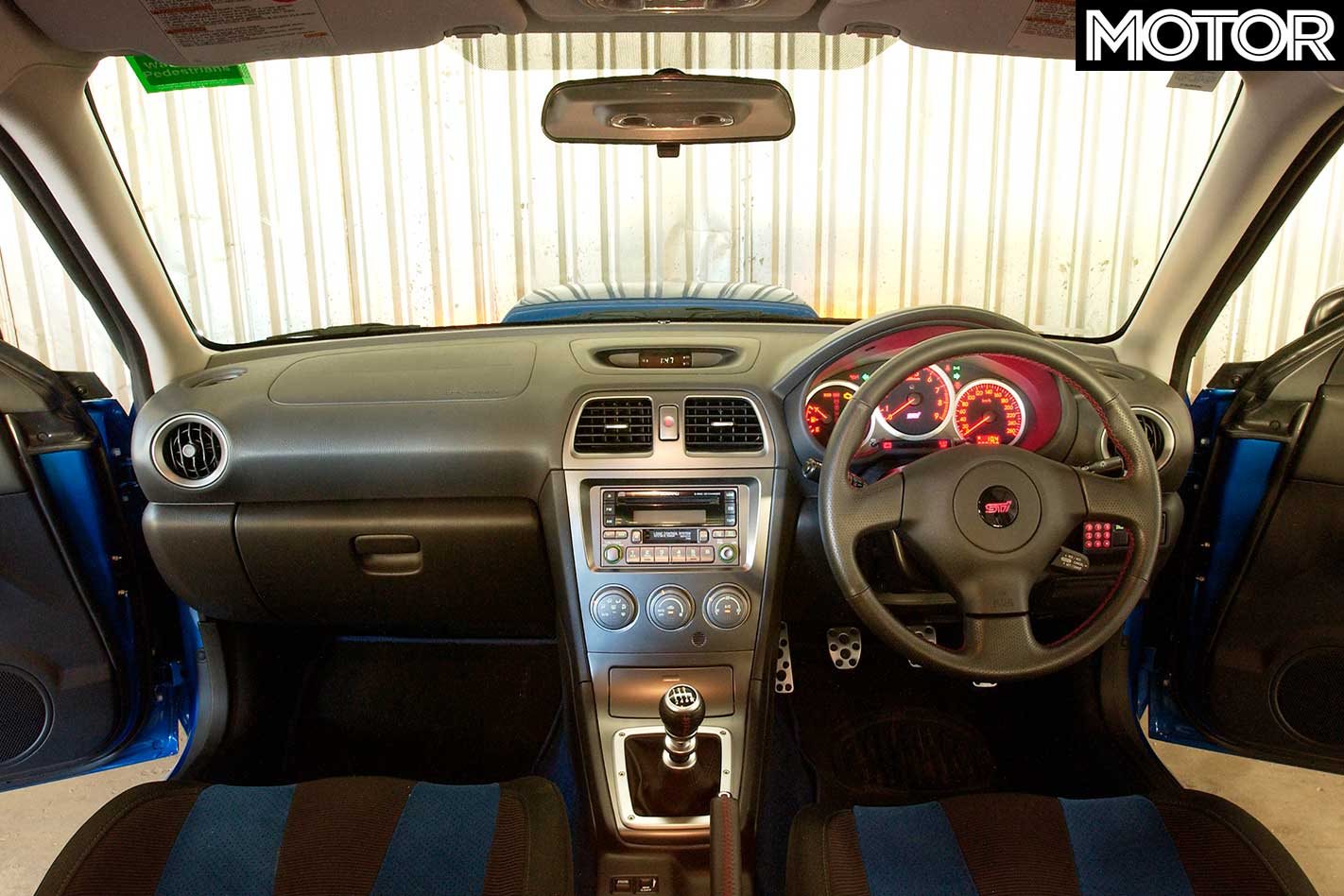 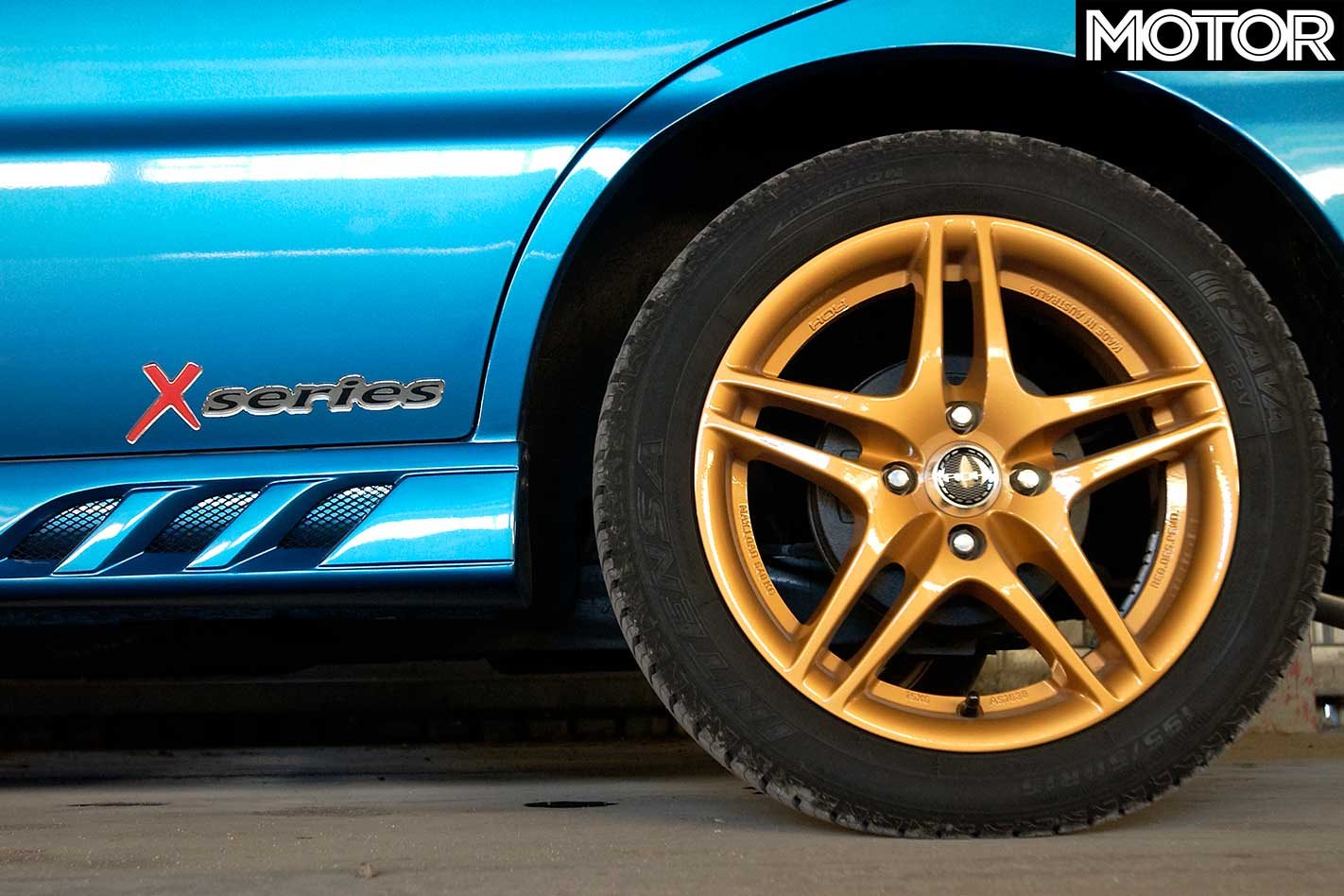 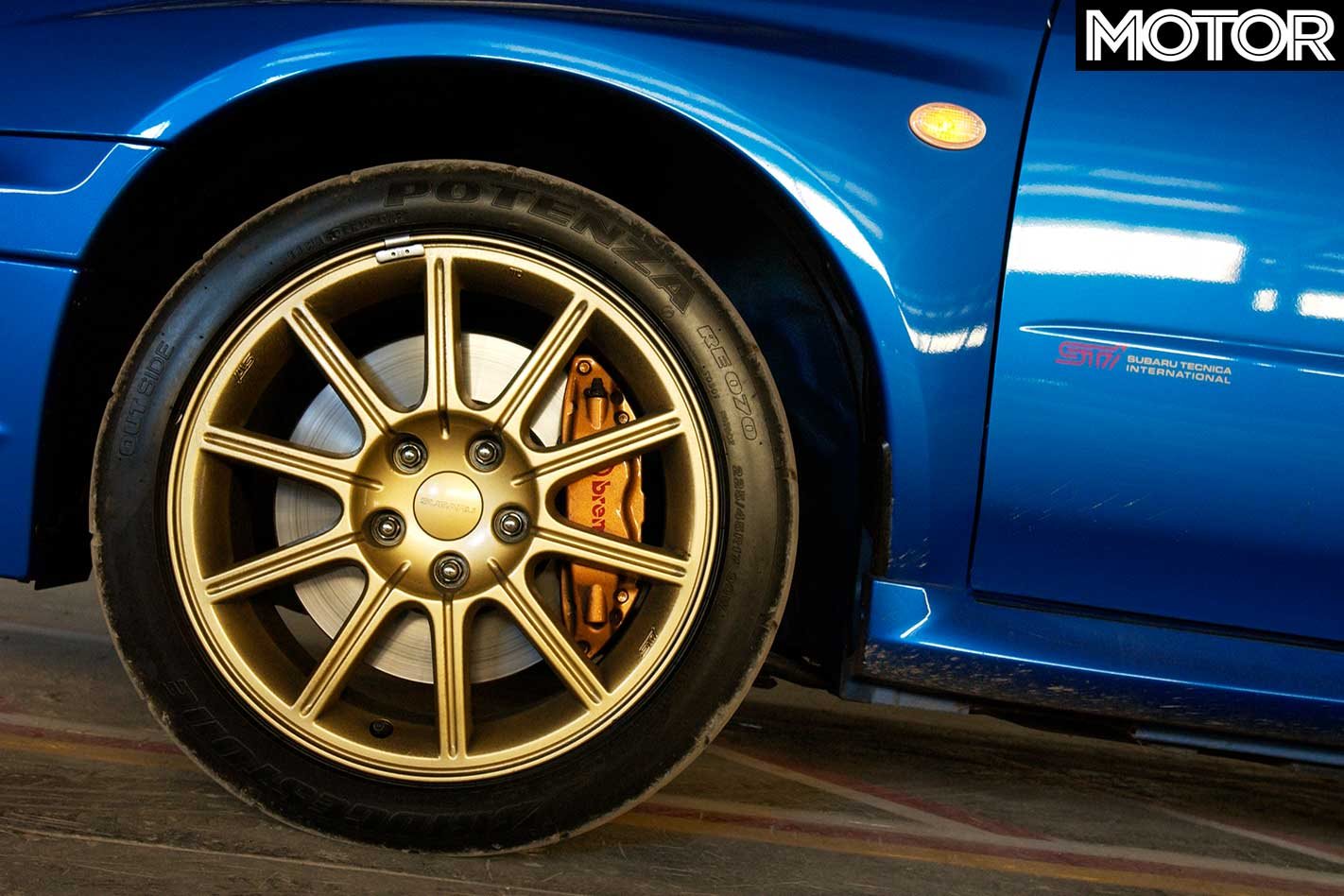