Built to satisfy new world rally championship rules, the 1999 subaru STI 22B is the greatest impreza road car ever

Built to satisfy new world rally championship rules, the 1999 subaru STI 22B is the greatest impreza road car ever.

Ten years after its debut, this car remains the finest Impreza ever. It may as well be a road-going world rally car as it’s your best chance to feel like the legendary Colin McRae on a winding road. The STi 22B is the King of Subarus, the deity of the iconic WRX, the GT HO for the PlayStation generation.

This Super Sube was first shown at the Tokyo Motor Show back in 1997 as the ‘WRCar-STi’ and was a direct result of Subaru’s World Rally Championship campaign, giving it enormous street-cred right off the bat. 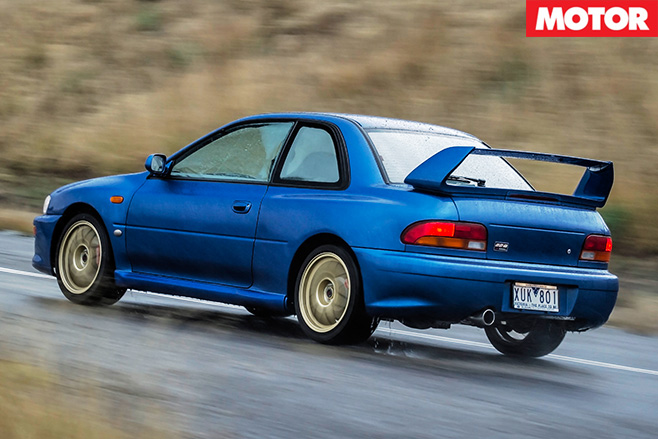 It was the response to a raft of changes to the WRC regs for the 1999 season, after the FIA thought that rally cars had become more like Le Mans-style racers rather than showroom-based vehicles that could be used – as Subaru did so well – for brand building.

So when the governing body decided that vehicles must be showroom-based (saving manufacturers an estimated $30 million each in development costs), the 22B was born. Developed by Subaru Tecnica International – Subaru’s performance tuning arm – all 400 ‘WRC Blue’ numbered versions sold out almost instantly in Japan (reports state anywhere from 24 to 48 hours).

An additional 25 (un-numbered) were produced for export, of which five were nabbed by Subaru Australia for local consumption in 1999. 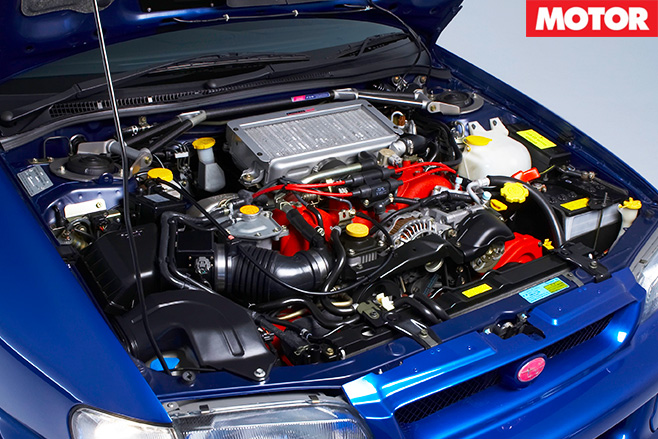 So what’s so good about the 22B? Based on the two-door shell of the limited-run STi Version V, but with heavily flared guards, the 22B ran a hand-assembled version of the WRX’s turbo flat-four with capacity upped from 1994 to 2212cc.

A closed-deck block housed a set of forged pistons fed by stronger, sodium-filled valves, with metal gaskets and molybdenum-coated internals used throughout, and the top-mount intercooler was given a water-sprayer.

Despite the changes, the 22B made the same ‘206kW’ and near-enough the same torque as the ’99 STi Coupe (360 plays 353Nm), but the key to the 22B’s superiority was that its torque peaked 800rpm earlier, thanks in-part to a more sophisticated engine management system. 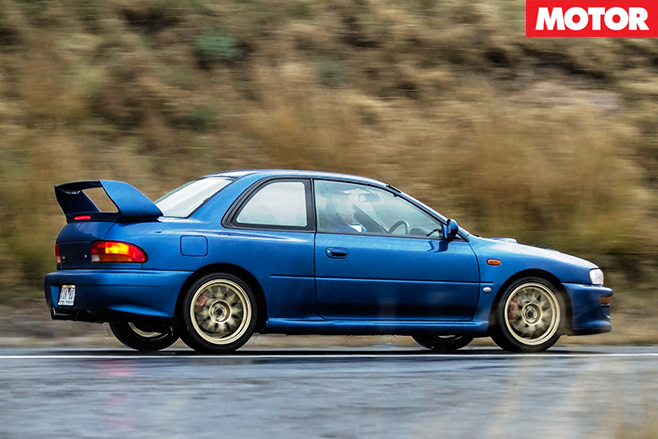 At the time of the 22B’s Japanese release in June ’98, HSV was building a 230kW GTS that weighed 1740kg, while Porsche’s 911 Carrera made 221kW. Mitsubishi’s Evolution V Lancer was the only vehicle in the 22B’s league, but it wasn’t officially sold here.

Further upgrades included wider front and rear tracks, with pumped guards adding 80mm to the Impreza’s width. Unique 17-inch BBS alloys were an inch bigger than the regular STi’s, and the 22B was also 15mm longer, thanks to its two-way adjustable rear wing. It sat 15mm lower on Eibach springs and Bilstein shocks, and aluminium suspension components helped it shed 25kg from the STi’s 1295kg.

That all meant the 22B could devour any local V8 and a swag of imported metal in a point-to-point shootout. Indeed, the intensity of the Super Sube’s experience saw words such as “violent” penned by local motoring press. While the chassis’ of various WRX/STis and Evo Lancers already displayed supreme grip levels, the 22B stretched the envelope even further. 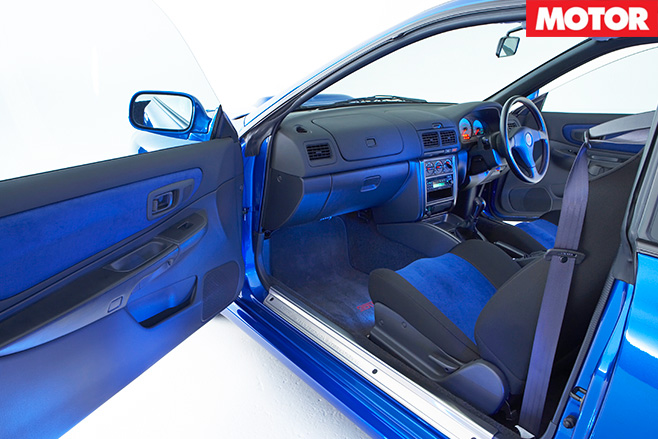 The Driver Controlled Centre Differential (DCCD), also seen in the STi, meant that the amount of torque delivered to the front and rear axles could be altered from inside the cabin. Playing with the split usually induced understeer, but the device was needed for the WRC car, so it had to be fitted. Leave the thing alone and pitch the 22B into a corner and it simply stuck. Like Araldite.

HSV’s top-of-the-range GTS 300 – which was produced a year later, mind you – took 3.1 seconds. Combine this sort of punch with the 22B’s great chassis balance, crisp steering (it had a quicker rack) and prodigious grip, and you ended up with a supercar stormer. Sure, it couldn’t touch Porsche’s 993 911 Turbo in a straight line, but it could challenge any atmo 996. 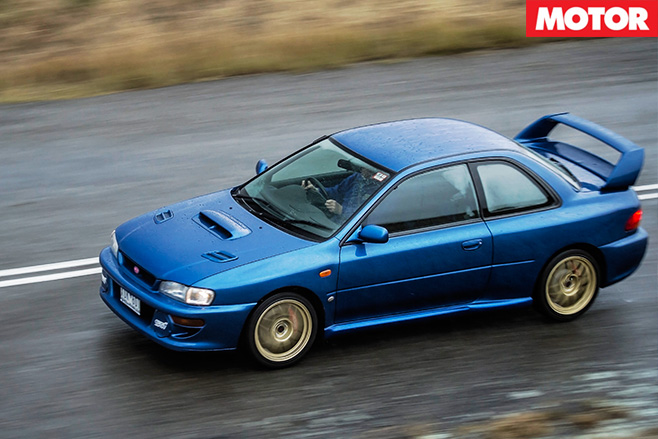 And that’s what the 22B was built for. This is not a car that’s about carrying kids or fuel economy: it’s a pure, unadulterated cornering machine with the precision and ruthlessness of a laser-guided missile.

It’s about achieving a result regardless of how. In doing so, Subaru brushed aside rationalism and set a sticker price of $132,000 – $7000 of which, Subaru Australia claimed, went towards ADR approval.

That made the 22B more than twice the price of the STi (which we dubbed “The bargain of the century” in February ’99) and placed it firmly in BMW M3 territory. But the 22B was never meant to be driven by every second architect – this is a sole-purpose destroyer. 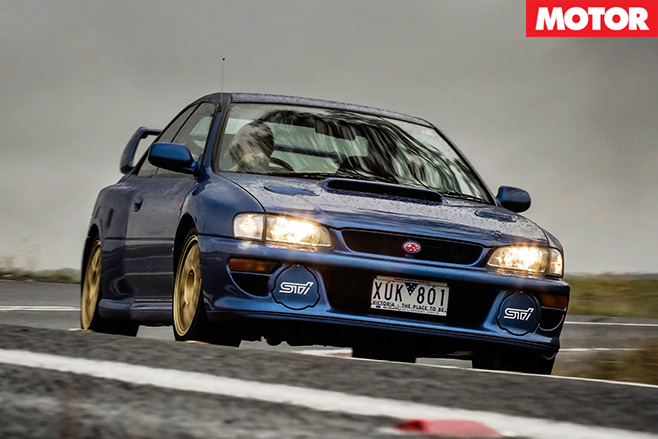 As such, it has no ABS, no CD player, nor any fog lamps behind those STI covers. It’s not as comfy as its half-price sibling, either, with a harsher ride and noiser Pirellis. But that’s totally missing the point.

Put simply, the 22B remains the ultimate Subaru. With such a limited number produced, it is the rarest of a supreme breed of the most-iconic WRX. It pushed budget, marketing and rationality aside the way an enthusiast builds his or her dream car regardless of cost, delivering uncompromised cornering ability and power delivery.

Its devastating point-to-point capability rightfully made supercar owners envious. Sure, the 22B doesn’t have a 911’s classic lines, nor decades of heritage. It doesn’t have the pull of a Ferrari, or the velvet-glove appeal of an M3. But can it devour its pricier rivals on a mountain pass? You bet. Above all, it was the result of – and is now homage to – Subaru’s glory days of world rallying.