Cameron McConville is on the phone and he isn’t mincing his words. “This car will scare the shit out of you,” he warns.

This feature was first published in MOTOR's June 2006 issue.

“I’ve just given it a shakedown and it’s probably in the top three most powerful road cars I’ve ever driven. Whatever you do, don’t nail the throttle in first gear with the traction control off. Actually, don’t jab it in second or third either for that matter, because it has so much power you could spin, even in a straight line.”

Nothing inspires confidence more than a V8 Supercar star telling me that the car I’m about to pick up actually intimidated him on the open road. Thanks for that mate!

When McConville, relishing my discomfort, cheekily adds that this psychotic PWR Performance Products breathed on ClubSport R8DT has more power up to 6000rpm than his racecar, my apprehension only increases. It’s also a customer’s car, not a press hack. Respect, I think, is called for here, that and a healthy dose of self-preservation. The figures are mind-boggling: 399kW at the rear wheels! That’s 470kW and 727Nm at the flywheel; all accurate, DIN-corrected figures according to PWR engine guru Carl Gibson. The stock LS2 makes 297kW and 530Nm.

This R8 is PWRPP’s first customer LS2 V8 and it’s in Stage 2 supercharged spec, meaning it gets a hotter cam and different pulley gearing that overdrives the supercharger to 85 percent of its maximum revs, about 17,000 at 6400 engine rpm. In this same R8, the Stage 1 kit made a paltry 318 rear-wheel kilowatts, which obviously wasn’t quite enough for power hungry owner David Stubbs. In the showroom, right next to where the Super Cheap Auto V8 Supercars are built, I do a lap of the car with PWR team manager Johnny Panozzo and that offers no insight at all into the power that lurks; it just looks like stock HSV. But pop the bonnet and you cop an eyeful of serious engine, made even more race looking by the fact that all the cheesy plastic engine covers have been ditched. All you can see is the shiny blower, raw head covers with their black coil packs, heat exchanger (PWR speak for intercooler) and bigger airbox. It also cops PWR headers and a 2.75-inch system back to the intermediate HSV setup.

The engine starts crisply, almost like a 2.0-litre, it’s as if there is little flywheel effect but that can’t be right. The gentlest squeeze of the throttle wakes the supercharger and it whines menacingly. Yet the engine idles smoothly, no rockin’ and shakin’, and the exhaust note is disappointingly (but legally) subdued. PWRPP installed a Japanese Exedy twin-plate racing clutch to handle the extra torque and it is heavy with not a lot of feel and a long take-up. Trying to balance its narrow friction point against an engine that wants to shoot for the moon is tricky but I manage to pull away without stalling, a minor triumph it seems. It’s 20 kays to my home and the sun’s out, but mindful of McConville’s advice, I take it easy, even starting in second gear with traction on while I get used to the aggressive clutch. It’s easy to bunny hop down the road like a learner driver if you don’t get the revs right and slip the clutch smoothly. Not that I did anything like that, of course. Eventually I can’t help myself and start to give the R8 the odd careful kick in the guts and the result is punishing power that seems without end. As the revs build the ’charger lets out a demonic scream like a Stuka dive-bomber in full plummet. I don’t get anywhere near the redline because I keep running out of road and balls. 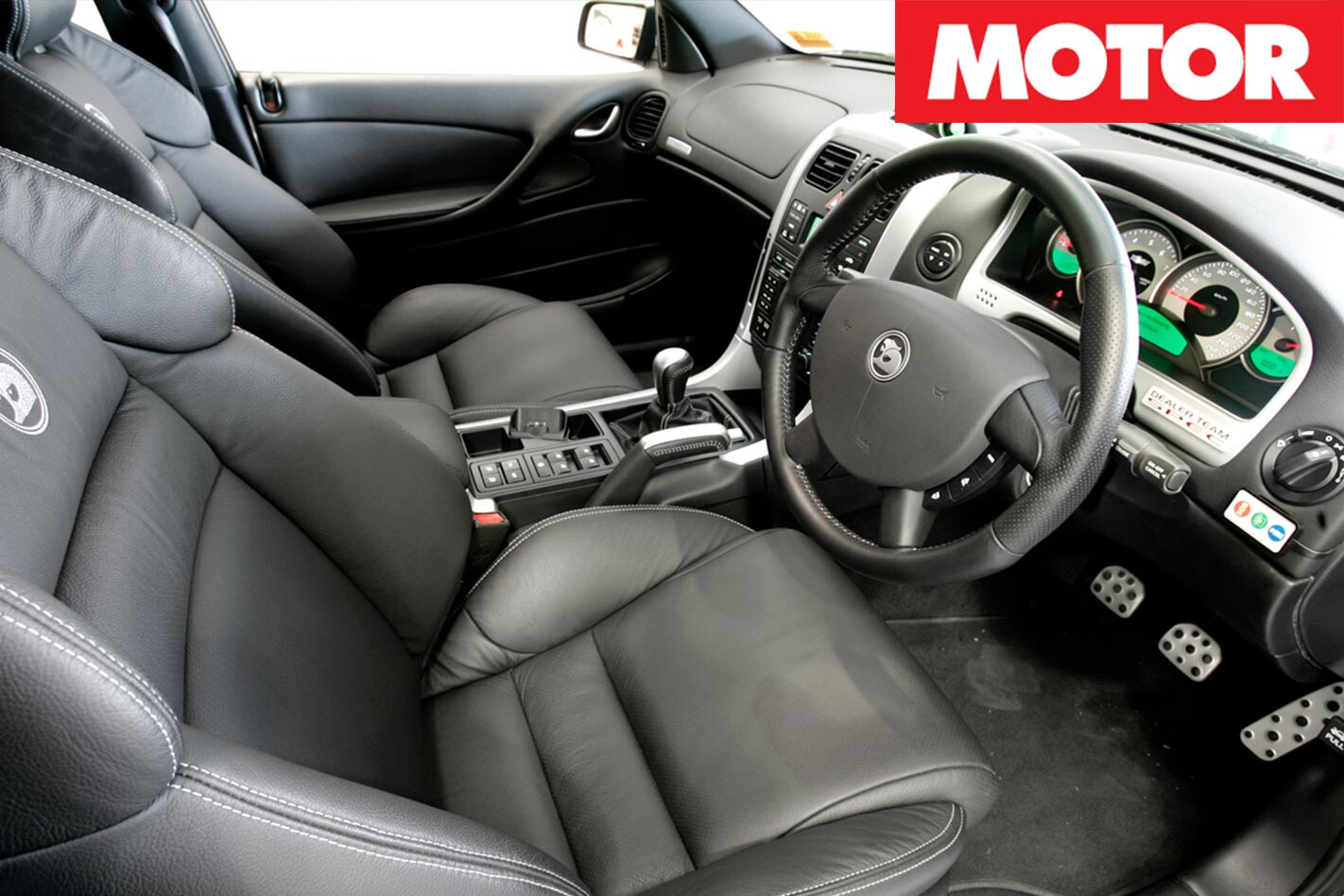 But loping along at the speed limit the car is as docile as a Honda Civic; the engine mapping is spot on for normal driving. But this car is destined for some abnormal driving the next day, courtesy of McConville.

Strangely, McConville lets me drive out to Calder Park and if there’s one thing I’ve learnt, it’s never try to impress a racing driver – they are all bad passengers – so we weave nondescriptly through the unsuspecting freeway traffic.

The owner, a Sydney engineer and businessman, is flying in for two hours just to go for a ride with Cam and drive his car for the first time since its power upgrade. I called him the night before and warned him that Cam would be doing some fairly lairish driving and his reaction was, “I don’t care what you do, cane it!” Stubbsy is our kind of car owner. The R8 has a nice new set of sticky Yokohama AVS tyres but not for long. Using Calder’s short circuit we send Cam out for a practice drift, but he doesn’t need one and immediately blazes by at a ridiculous angle, fully cocked over with the right front almost off the ground and leaving a smoke trail that would make drag racer Victor Bray jealous. The car has so much torque that he did it in third gear and probably could have done it in fourth. The noise is incredible, like a heavy metal choir, with the screaming supercharger the soprano, the tortured tyres handling the alto range and the roaring exhaust the bottom end. Stubbs is over the moon; it’s a good investment.

Cam is used to big power but even he is impressed.

“There’s only one way to describe this engine, it’s awesome,” he marvels. “It felt like it accelerated as hard as my V8 Supercar. First and second gears are just ridiculous, it’s very hard to slide the car in the low gears, but it’s quite controllable in third once you start to slide.” We planned to clock Cam over three flat out laps of Calder to see how close the R8 could get to V8 Supercar times but a long brake pedal put paid to that. The first time McConville went for the stoppers at the end of Calder’s long downhill straight at 220km/h he didn’t think it was going to pull up and went up the escape road to be safe – with Stubbs on board. The HSV AP Racing brakes needed bleeding and would benefit from a top up with competition fluid and with the car’s new power max, and Stubbs planning to do track days, Cam also recommended an even bigger PWR race brake package. But even with bigger brakes and race rubber, this car will need to be treated with respect on the track, Cam says, adding he thought the R8 could get within three or four seconds of his racecar at Calder.

“This car will spin the tyres up on any surface in first and second and you have to feed the power on in third even on the racetrack. And you’d never take traction control off in the wet; that would be lethal. If anything, it teaches you to be smooth; you don’t need to jab at the throttle that will just upset it.” And you don’t want to get this car angry at the wrong time, believe me.

Mindful of the sleepy stoppers, I do a handful of laps of the short circuit. With traction control disabled, I only nailed it in a straight line, heeding Cam’s advice to feed the power on. Damn it’s fast. Even waddling onto the straight like an old woman, the R8 was hitting 180km/h 400 metres later. Absolute power corrupts and after driving this car I felt like a bent politician, waiting for my next surreptitious installment of grunt. Perhaps the last word should go to Stubbs, who had the time of his life riding shotgun with Cam and watching him blur past him in a blue haze before finally experiencing his beefed up baby behind the wheel.

“I’ve had a Porsche GT3 but my roots were in V8s and I’m extremely happy.”

*This particular PWR Clubsport has been recently listed on TradeUniqueCars for $45,000 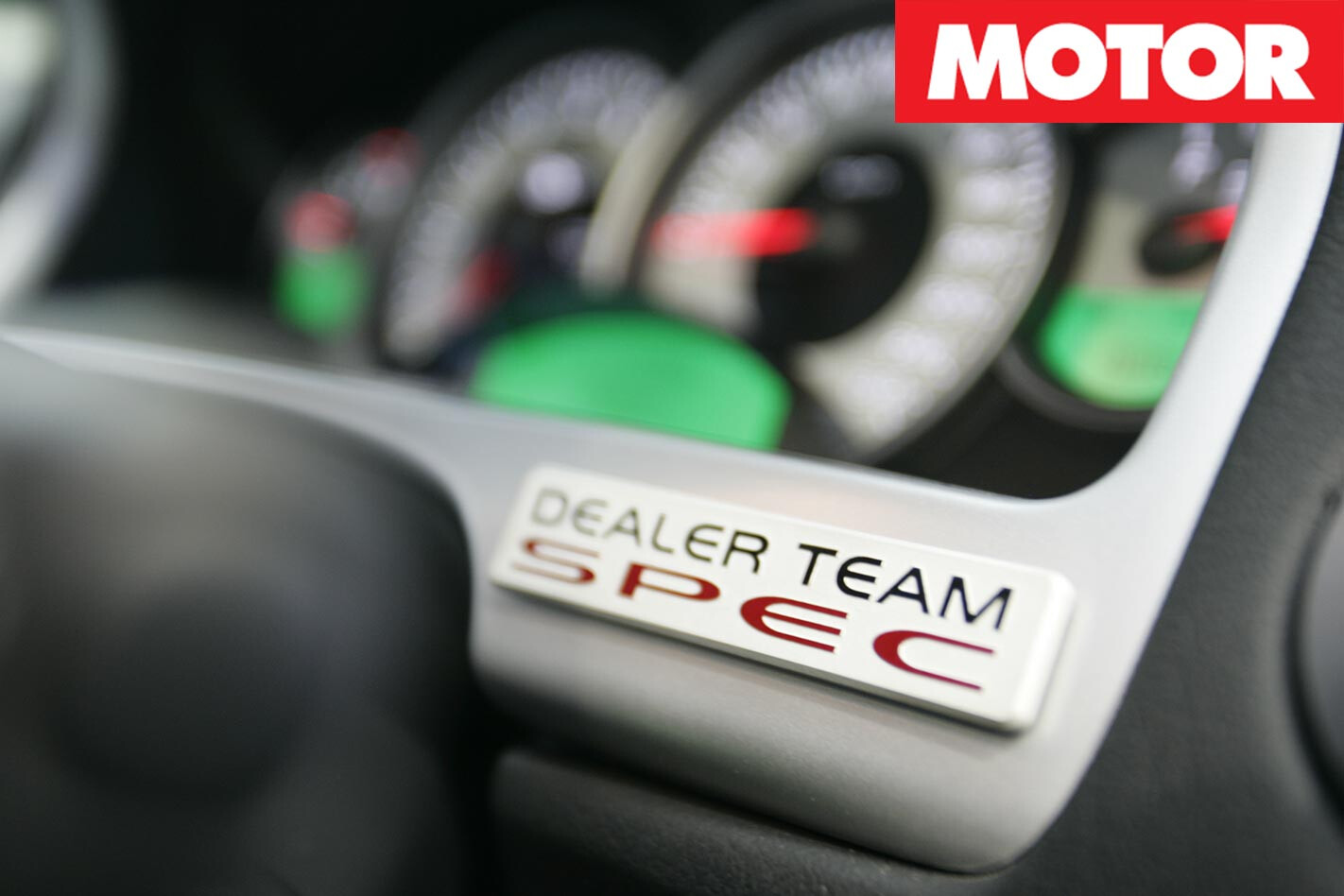 What Lies Under the Hood? 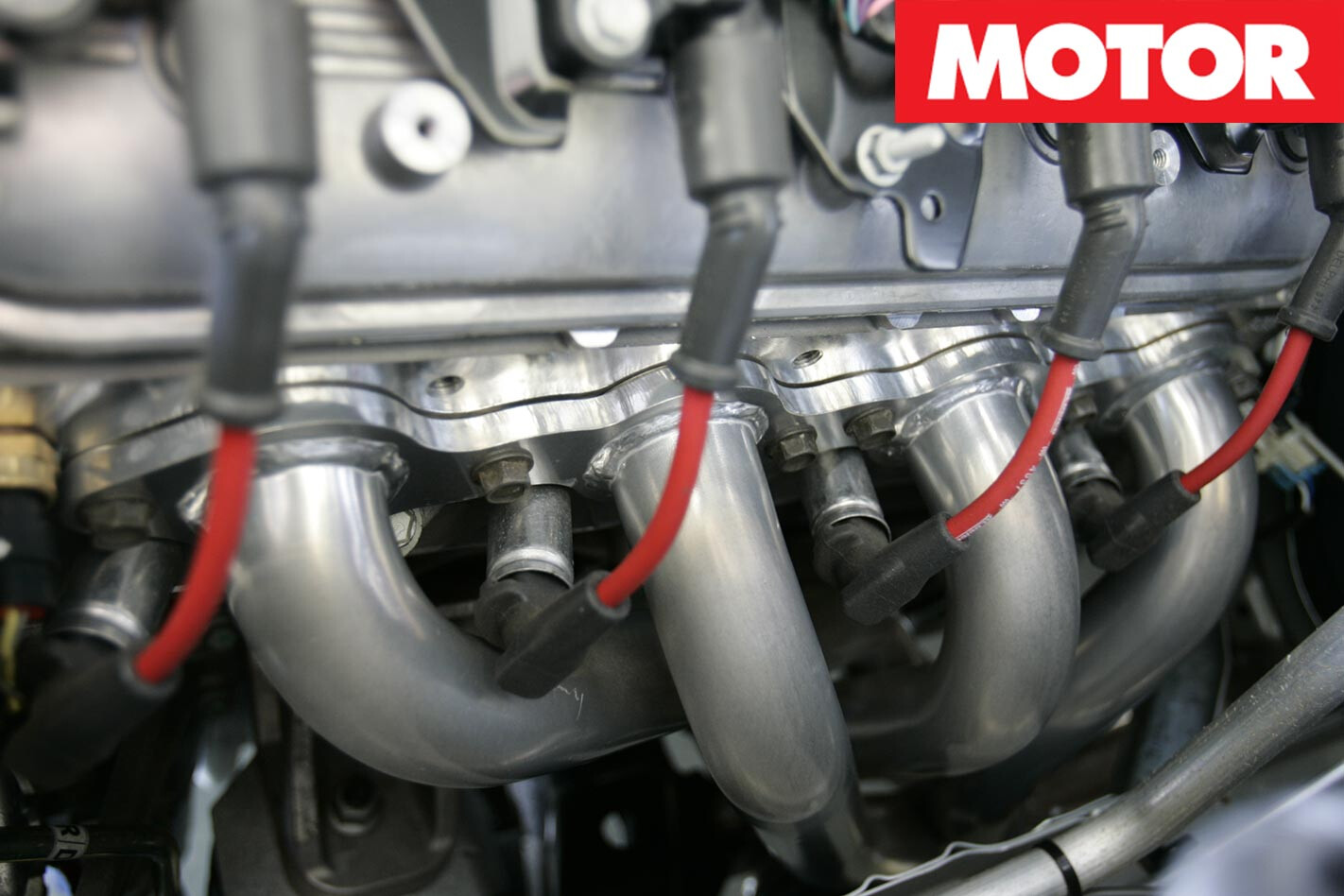 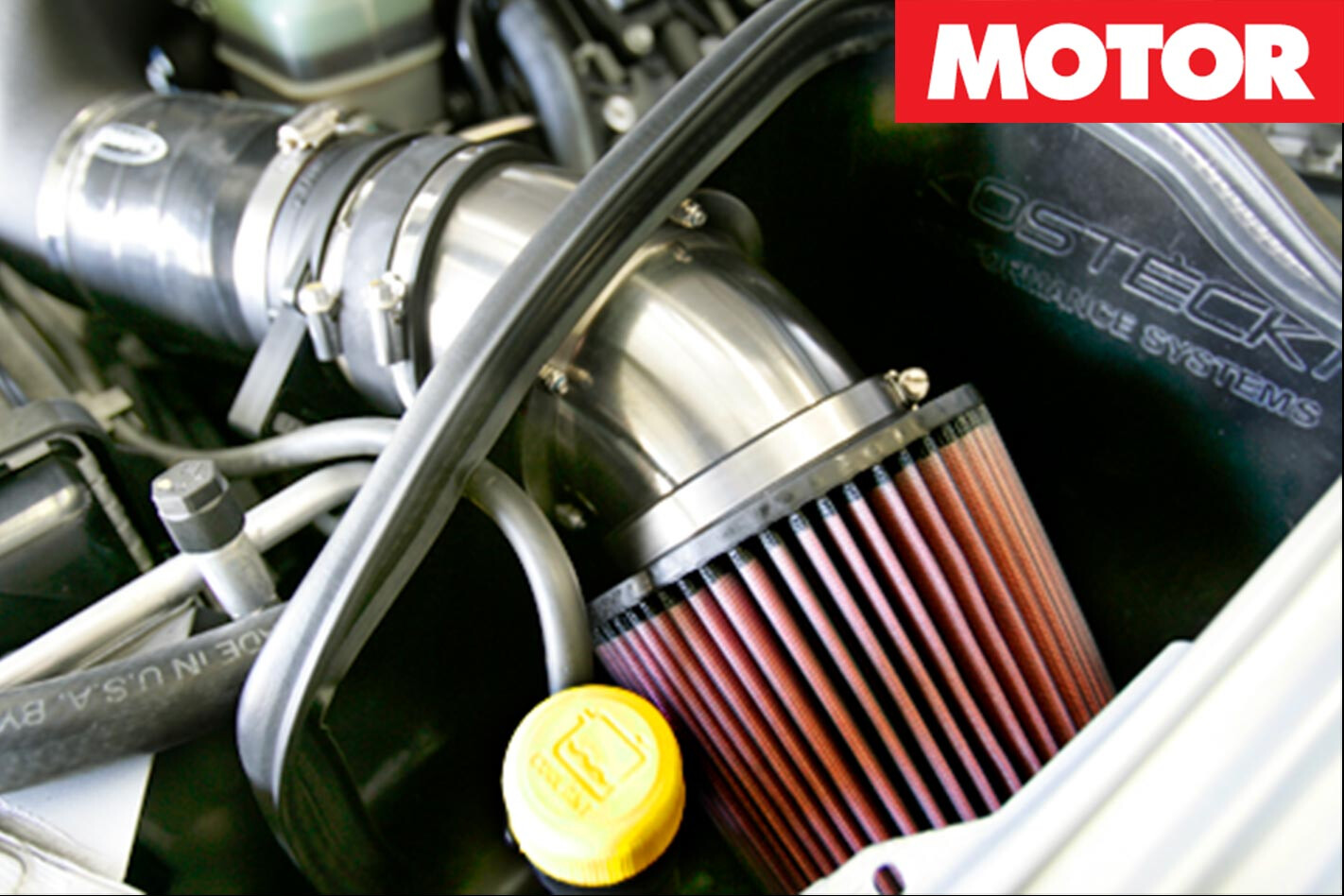 Cold Air Intake
That supercharger is fed directly from a K&N air filter and a custom airbox. The throttle body remains the standard 90mm LS2 unit. The man behind the PWR monster is Carl Gibson, from the famous Victorian racing family (his father was Hot Gibson and his brother Bevan was tragically killed at Bathurst in 1969). Carl raced a Repco-Brabham sportscar at 16 before graduating to Formula 3. He moved to the UK and spent 10 years in Formula One, firstly as a mechanic but eventually engineering Mika Salo at Arrows. He returned to Oz and spent seven years with HSV where he built the 7.0-litre V8 for the still born HRT 427.