Formula 1’s summer break is here, meaning the Singapore night race is close! Here’s what you may not know about the GP under lights

Here’s what you may not know about the GP under lights; the one that’s as eagerly anticipated by fans as it is by one Aussie in particular…

But for that to happen, a dedicated crew of over 4,000 worked around the clock for 22 weeks to set-up the temporary facilities featuring 2608 concrete barriers, nine grandstands and numerous hospitality facilities, nine entertainment stages and 1600 lighting projectors throughout the 799,000sqm Circuit Park.

“Everything must be ready for the 250,000 spectators coming through the gates and the global TV audience of hundreds of millions,” says Australian Jonathan Giesecke, Senior Project Manager at Faithful+Gould, Official Engineering Project Manager for the Formula 1 Singapore Grand Prix. 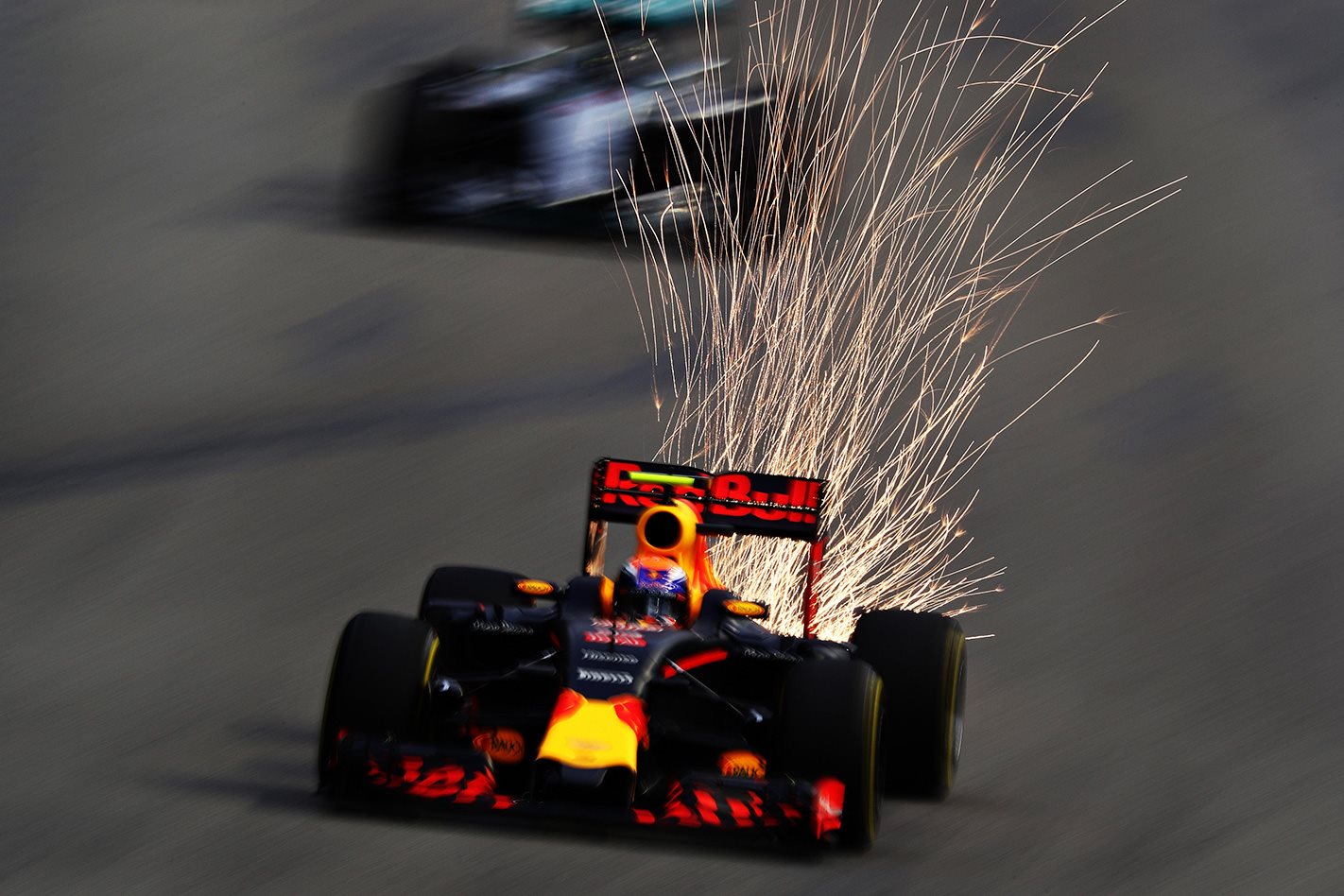 For 308km of F1 on Sunday, and which usually hits the maximum two-hour time limit. Of course, discovering the best places to watch the cars thread the barriers is all part of the experience, especially with the action so close in Singapore.

A slew of new ticketing offerings were introduced for this year, such as single day tickets for selected grandstands and the Premier Walkabout ticket category to allow fans to customise their experience over the weekend. This is in addition to a new junior ticket for all Zone 1 grandstands, Super Pit ticket category as well as three new Combination packages, which provides flexibility to explore all of the different parts of the Circuit Park over the weekend.

“There’s also a new Empress Grandstand which will offer spectacular views of the cars slowing down between Turns 11 and 12 of the Marina Bay Street Circuit before they cross the historical Anderson Bridge,” says Michael Roche, Executive Director, Singapore GP. 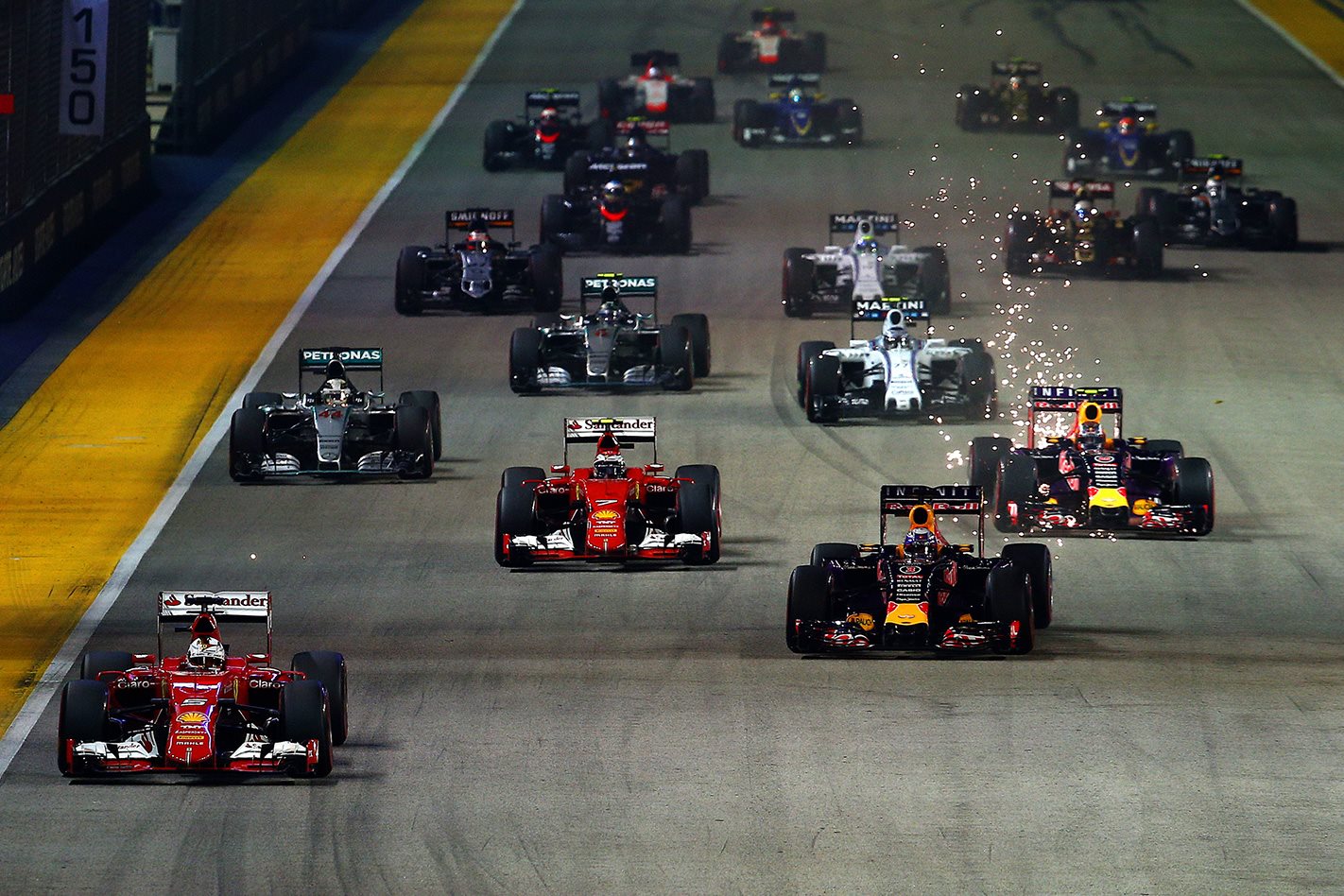 That’s the amount of lighting projectors needed to create one of the greatest spectacles in world sport. The bespoke, state-of-the-art system from Italian lighting specialists DZ Engineering has not only delivered optimal visibility for night racing conditions since 2008, but also wowed fans all over the world as the track is lit up against the city backdrop.

The lighting projectors are strategically positioned around the track, ensuring that the drivers can attack the racing line with minimal glare and reflections from a wet surface or spray from other cars.

Setting up the system is not the work of a moment with the 1600 light projectors requiring 108.4km of power cables, and 240 steel pylons. But, to reduce timeframes the power cables are housed within aluminium trusses – similar to light fittings at concerts – safely and securely well-above ground level. 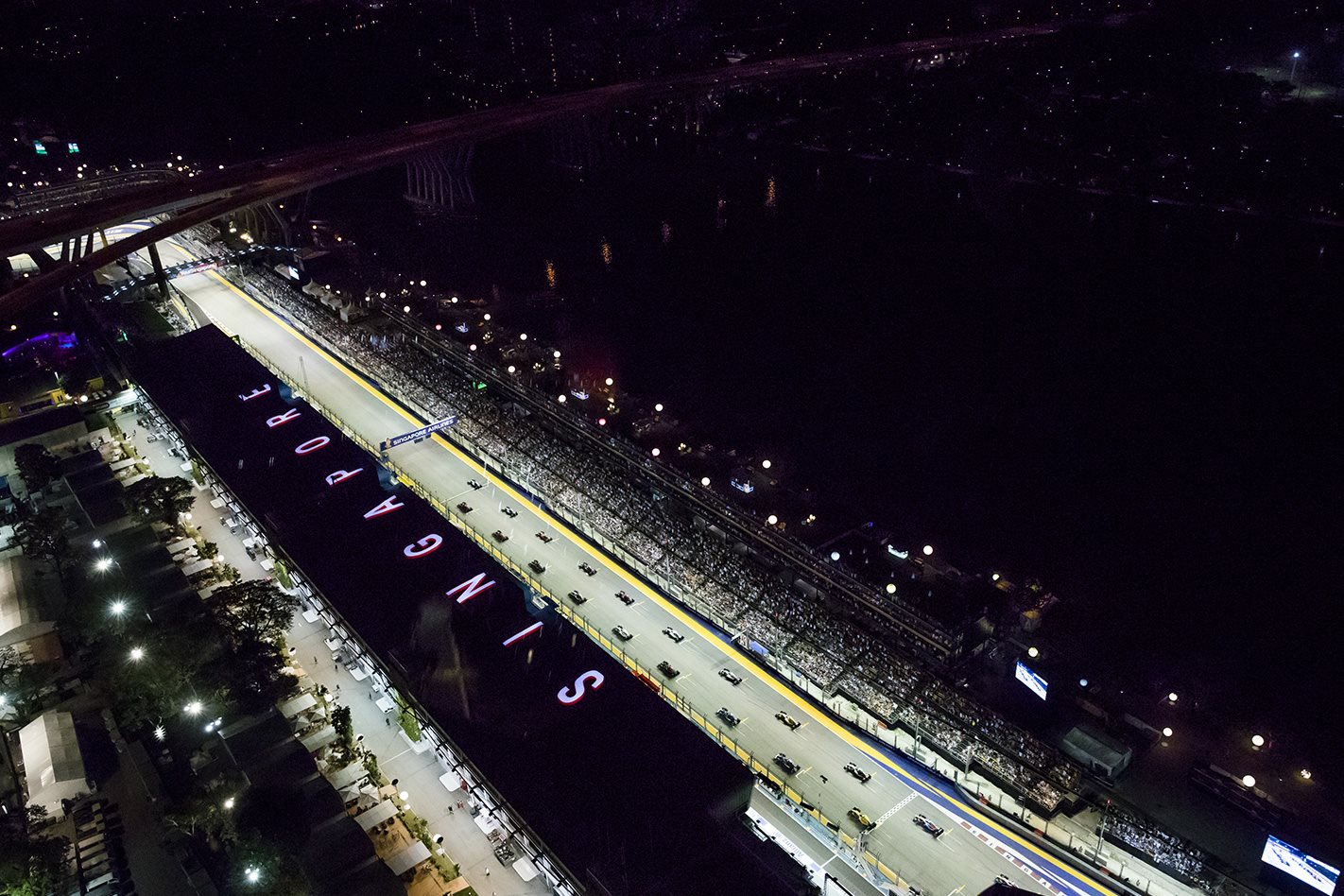 The number of plates of incredible edibles served in the Formula 1 Paddock Club throughout the event, by celebrity chef Jean-Georges Vongerichten, whose new restaurant The Dempsey Cookhouse & Bar will be one of the highlights of Singapore’s famed Formula 1 Paddock Club, which takes hospitality to new levels every year.

The Formula 1 Paddock Club is where royalty, captains of industry and rock stars rub shoulders in a super-exclusive enclave, designed to not only put them at the heart of the sport, but immerse them in luxury. It is, absolutely, the finest way to enjoy the pinnacle of international motorsport.

Other hospitality options include the new industrial-themed Apex Lounge located opposite the podium, the luxurious Sky Suites, directly across from the F1 team garages, Club Suites and the Green Room on the main pit straight, and the Turn 3 Premier Grandstand for a fantastic view of the opening corners (1-3) and the action that happens there lap-after-lap. 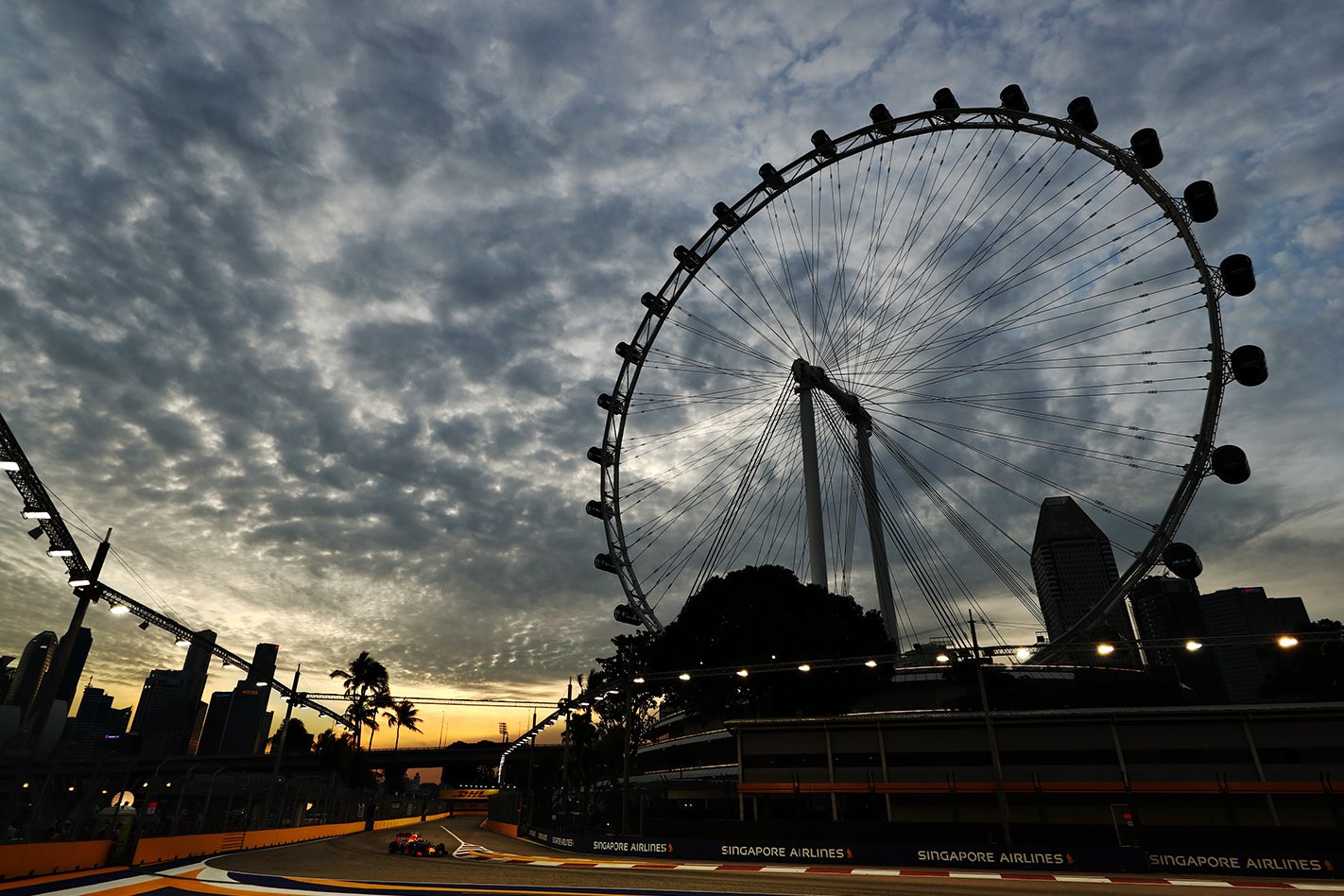 That’s the sheer weight (in tonnes) of Formula 1 cargo, which is flown into the city-state on seven jumbo jets. This precious cargo from the teams, weighing the equivalent of 280 African elephants, includes the all-important cars. Shortly after which the teams’ advanced parties arrive to set up the garages.

However, all of the teams stay on European time to ensure they’re razor-sharp for the night racing – with drivers, mechanics and engineers going to bed in the early hours of the morning and getting up around lunchtime to start their days.

“The flights actually work out in our favour in that respect, because we arrive in the evening, the guys get there and can have a big night if they like for their first night in Singapore and they don’t actually have to go to bed until 6 or 7 o’clock in the morning,” says Red Bull Racing team manager Jonathan Wheatley. 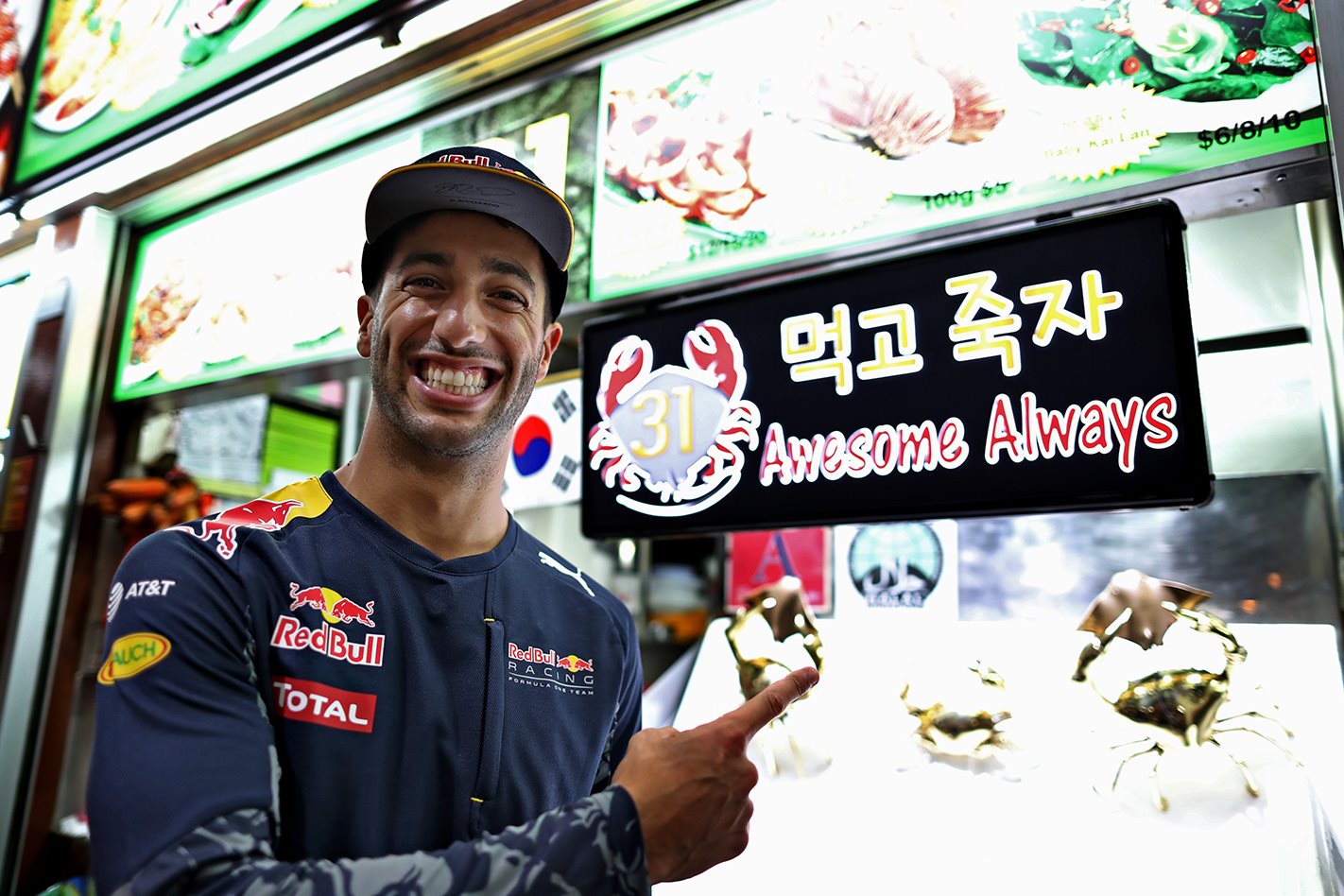 Naturally, organising a bigger and better entertainment line-up each year is a challenge.

“We have a mountain of work to do once any artist is confirmed – as it’s not just the one act. We try to balance our entertainment offerings between the younger music acts and the evergreen acts to cater to fans of all age groups,” says Michael Roche, Executive Director, Singapore GP. 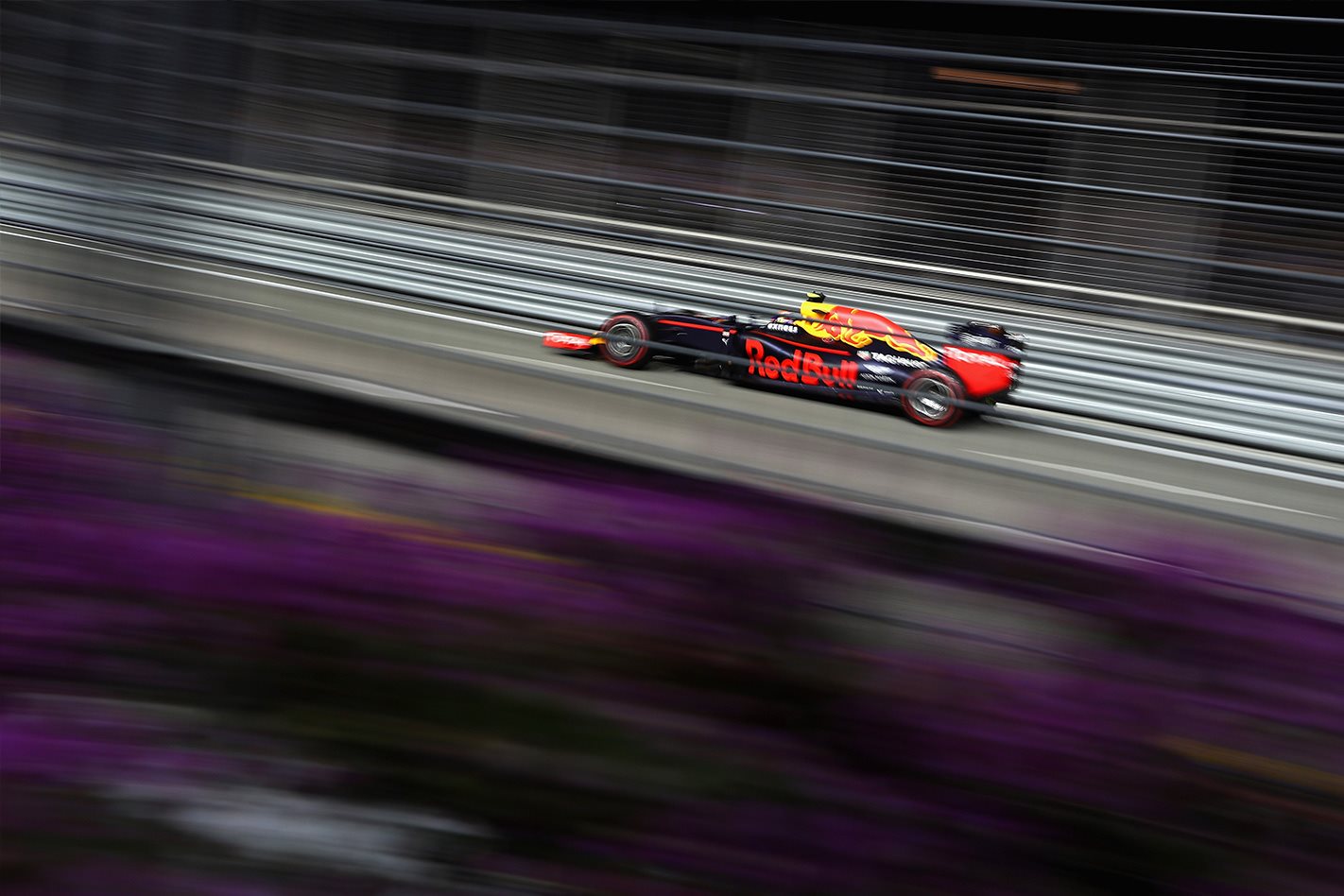 This is the amount of fluid lost by drivers during the Formula 1 Singapore Grand Prix, in which they’re under maximum physical stress, the cockpit temperatures soaring to 55 degrees at racing speeds.

To ensure the drivers retain concentration over the race distance, and keep cool under pressure – they put the hard yards in pre-event, with more heat training once on the ground. And it pays off.

“The last few years I’ve put emphasis on Singapore with my training, and I think the results have shown. I’ve been on the podium three years in a row there,” says Red Bull Racing’s Daniel Ricciardo, who knows the faster, more furious F1 cars this year will provide an even bigger test. 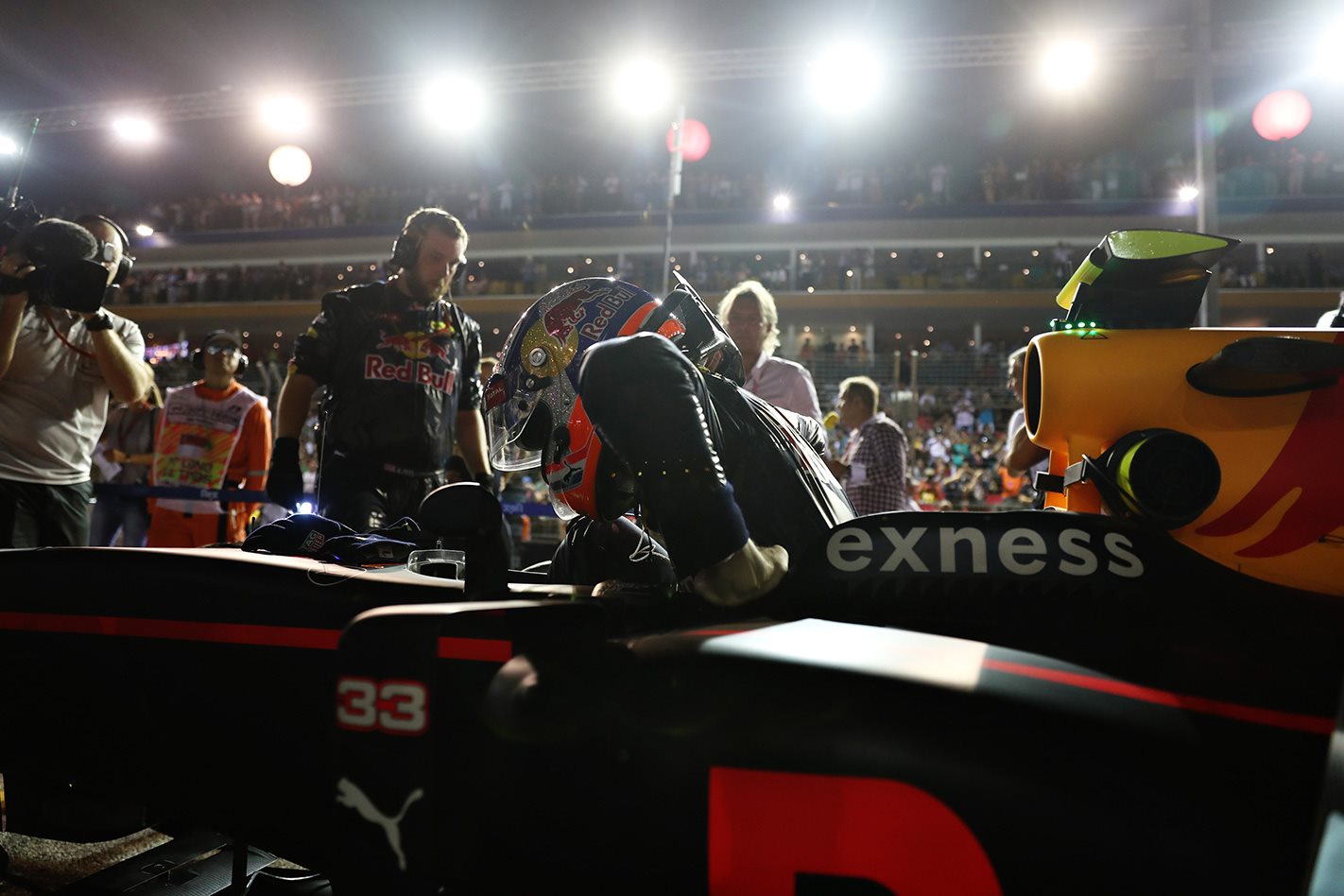 This is the number of accredited media who head to Marina Bay every year to cover the event across broadcast, print and digital. The 23-turn street circuit generally makes for great racing, and normally at a crucial point in the World Championship – with this year’s edition set to be a white-hot battle between Mercedes’ Lewis Hamilton and Ferrari’s Sebastian Vettel.

The FIA International Media Centre is where it all happens, above the F1 team garages, with journalists and photographers working long into the night to get the latest news from the paddock to the eyes of the world. The sport normally stays on European time to ensure perfect concentration at night, so it’s a mid-afternoon start going through to early morning.

“We have received great reviews amongst the international press, with many regarding Singapore as a must-visit destination on the Formula 1 calendar. This is certainly a feather in our cap,” says Mr Colin Syn, Deputy Chairman of Singapore GP. 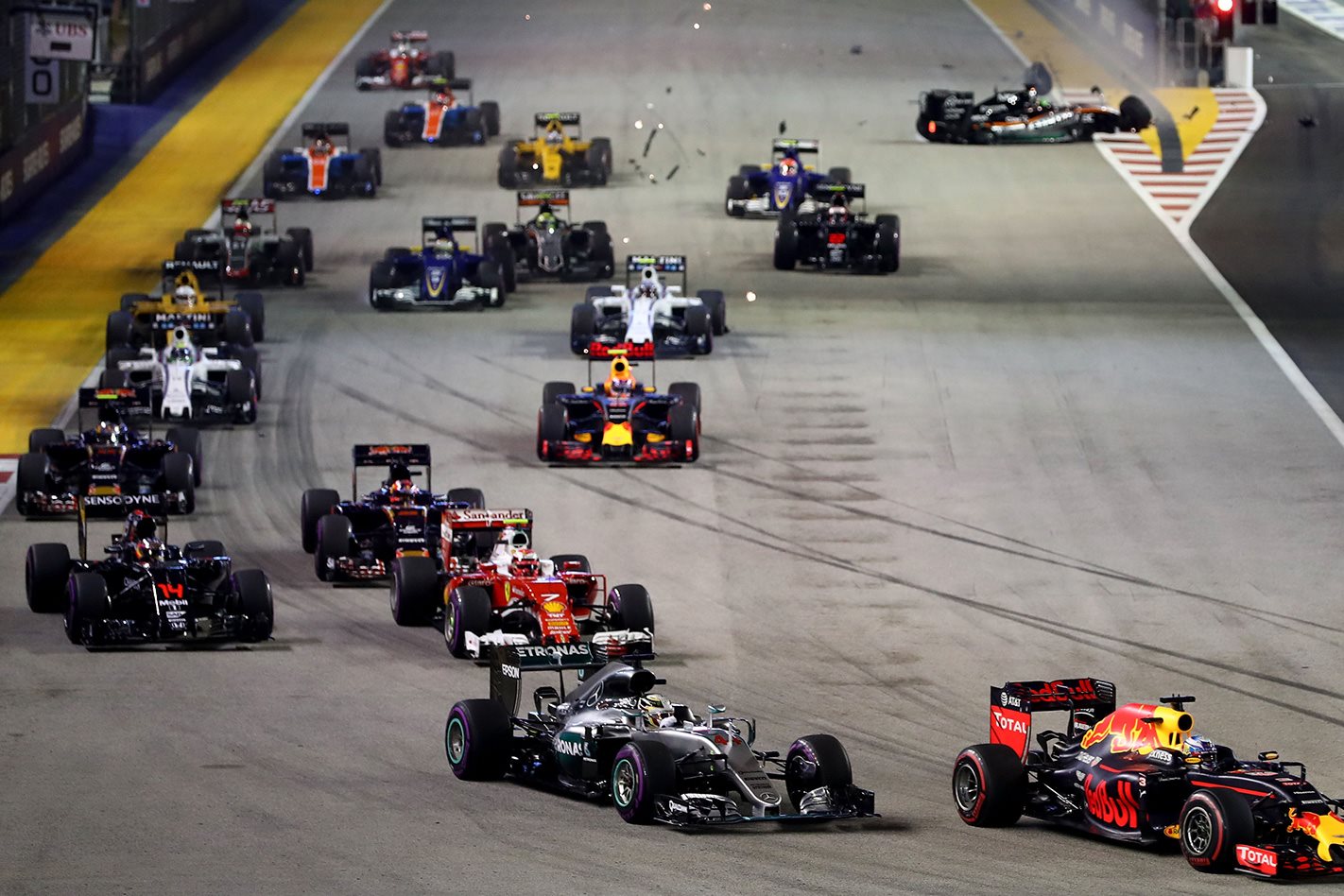 That’s the average number of spectators heading to Marina Bay Street Circuit every year, spreading out across the 799,000sqm Circuit Park – equivalent to approximately 80 soccer fields. Hugely popular, a ticket to the Formula 1 Singapore Grand Prix not only offers fans a night of fantastic racing and international artists.

For the family, there’s so much to see and do. On track the action never stops – with F1 and fantastic support categories in Ferrari Challenge Asia Pacific, and Porsche Carrera Cup Asia.

Off-track, kids young and old can join fun interactive activities like the Pit Stop Challenge, where you can challenge yourself against the Singapore GP off track pit crew by changing a tyre. You can even get behind the wheel of a race simulator, for a few laps of the Marina Bay Street Circuit. 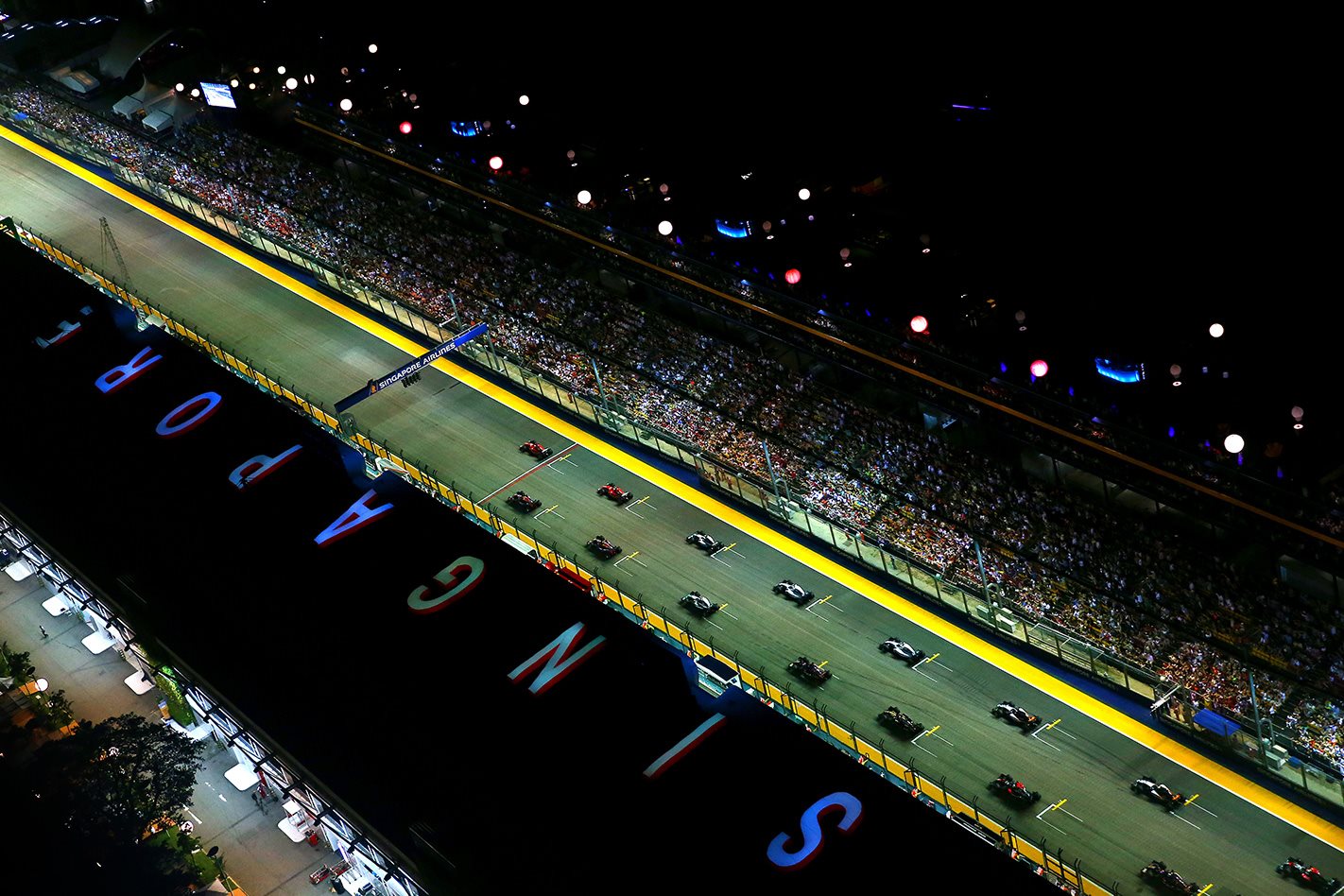 This is the exact duration of the now-traditional post-race fireworks display. It’s a performance that has to be timed to perfection, triggered as the winner crosses the line to take the chequered flag. Check out the podium celebration after that –before heading on to the Padang stage for the Calvin Harris concert.

But as the race weekend begins, the Formula 1 Singapore Grand Prix organisers are planning the pack-down, and dismantling of the circuit – for its return to city streets with minimal disruption to traffic and businesses.

“Nothing is left to chance with over 25,000 crew members working around the Circuit Park,” says Michael Roche, Executive Director, Singapore GP. “To ensure a smooth delivery of the event, all activities are planned down to the finest detail, and every department relies on a minute-by-minute guide.” 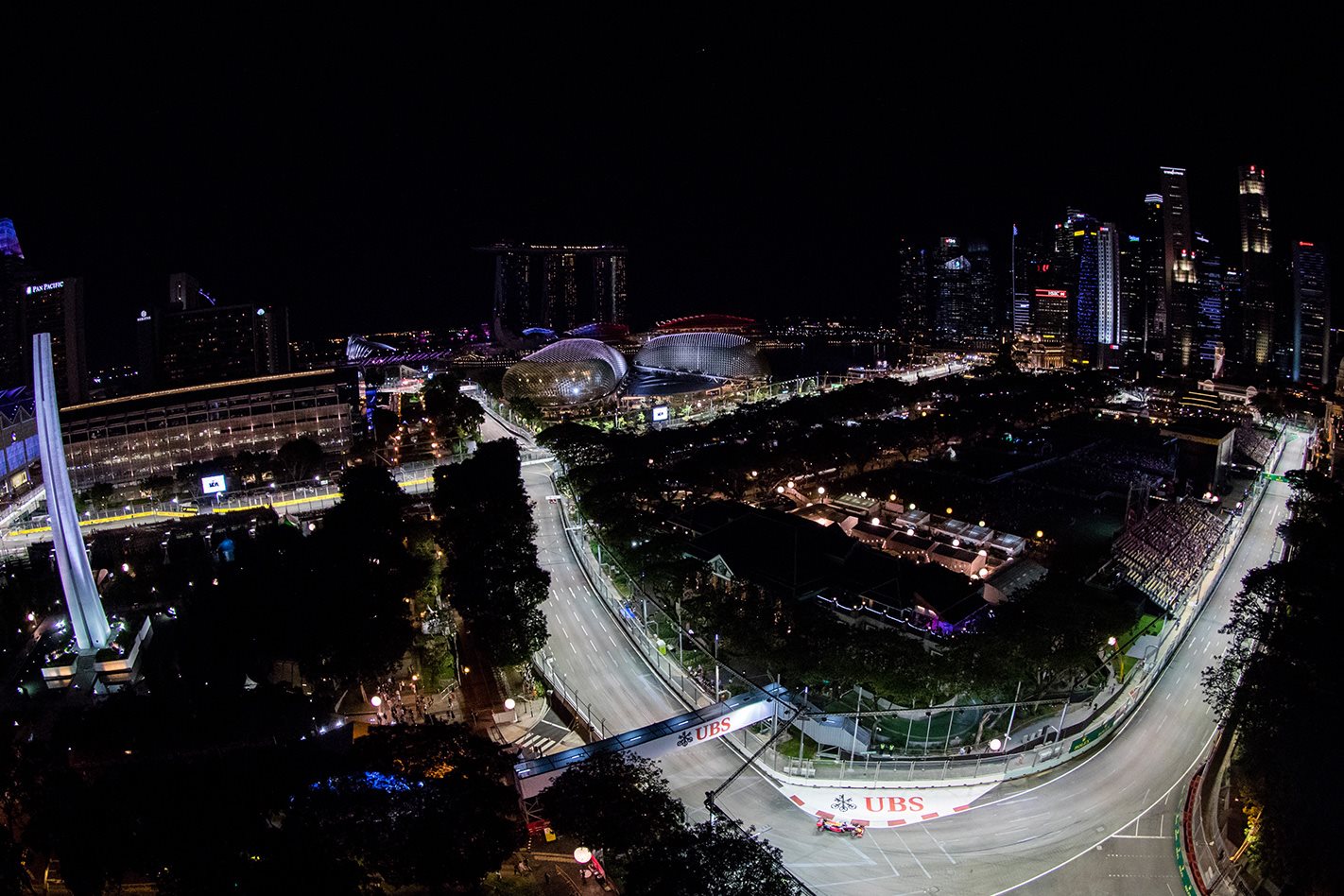 The 2017 FORMULA 1 SINGAPORE AIRLINES SINGAPORE GRAND PRIX will be held from September 15-17, with more information at singaporegp.sg