HSV’s versions of the new VS are sweeter than ever

With their 215 kW 5.7 litre V8s, HSV's VR Commodore-based GTS and Senator 215i models are without doubt the best high performance production cars ever made here.

They're fast; nothing past or present beats the genuine, laser-measured 246 km/h we've seen from a GTS with the mighty V8 spinning close to its 5500 rpm redline in the fifth of its six gears as it bellowed round the top lane of Holden's Lang Lang Proving Ground speed bowl.

And it's quick, too. Like 6.3 seconds from standstill to 100 km/h. If the bitumen is grippy enough to cope with enough of the car's 475 Newton monsters, that is. But sheer speed and surging acceleration aren't all the HSV is good at. Equipped with nice big brakes and excellent tyres on 17 inch wheels, it's as accomplished through the corners as it is on the dragstrip. 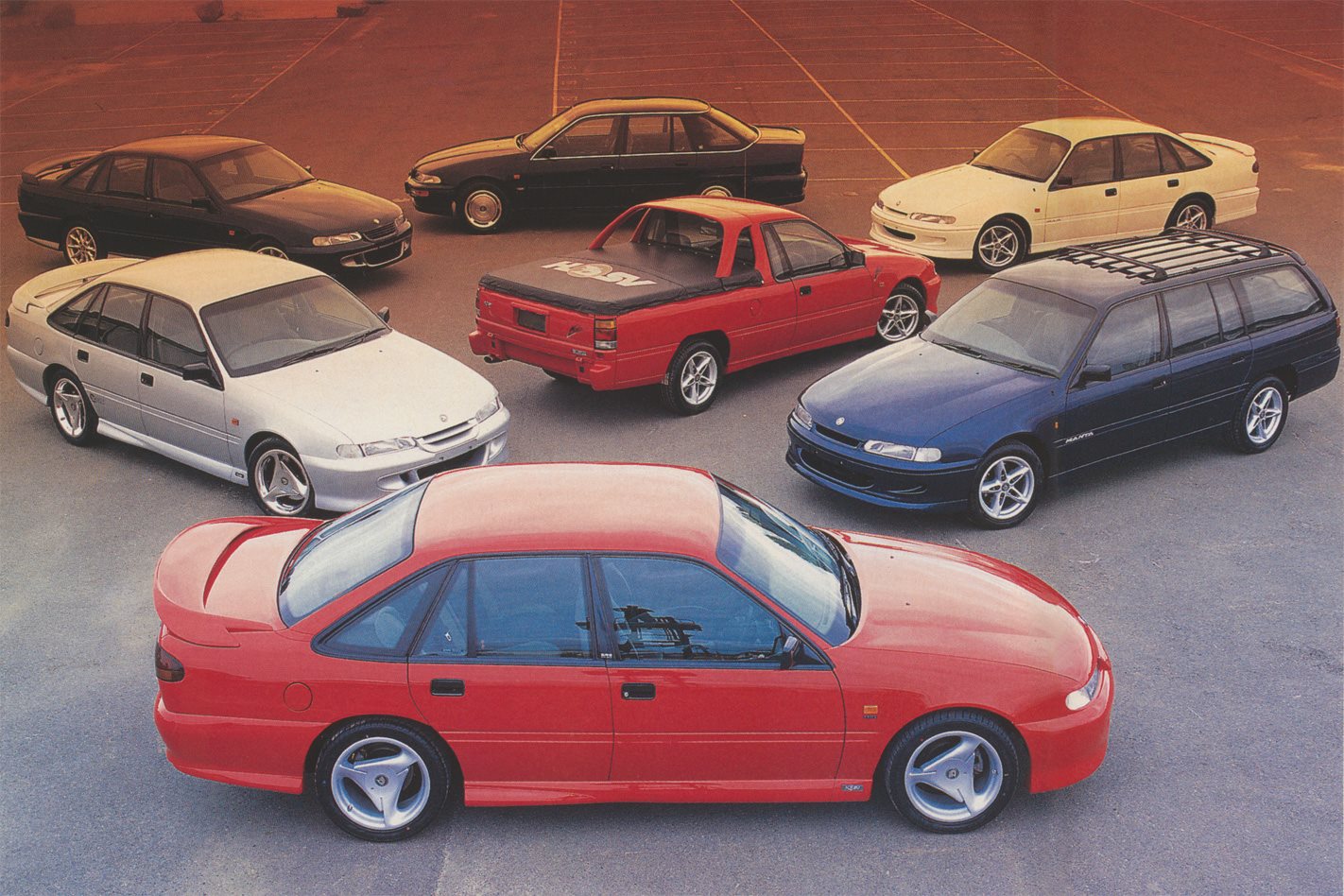 But when you've created cars like the GTS and Senator 215i, what next? Well, after the broad brush stroke of the 215i, HSV decided the fine detail might benefit from some touching up.

Including, of course, the 185 kW 5.0 litre models which are the company's biggest sellers. So HSV's VS-based line-up is a story of incremental improvement and minor modification. 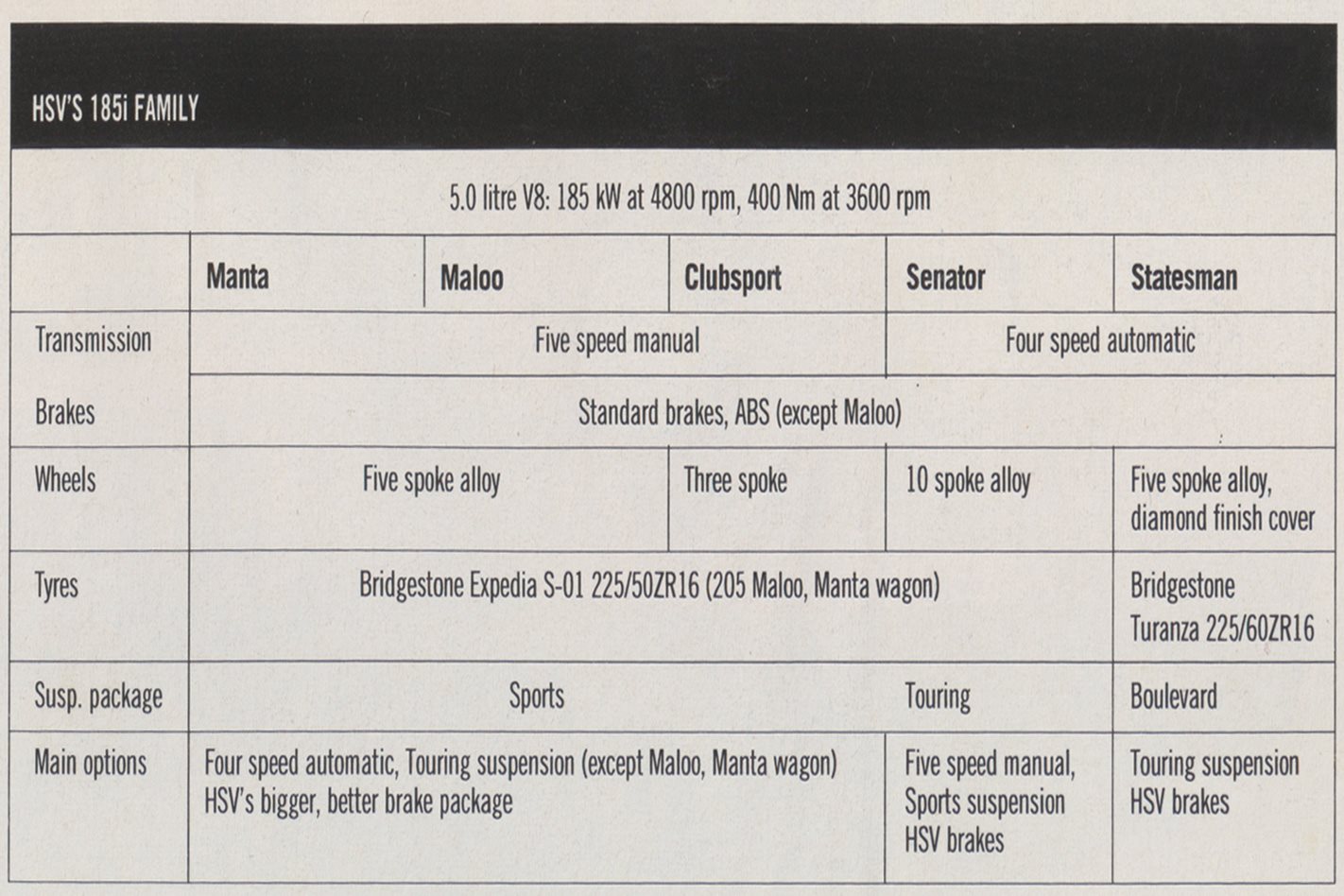 But first, and perhaps most important, is the addition of a new model which slides into the range beneath Clubsport. Once upon a time the Clubsport was priced about $5000 more than Holden's SS V8. With the passage of time and HSV's determination to better distinguish its cars from Holden's performance products, that difference has doubled.

Manta, as it's named, mates HSV's bread and butter 185 engine with a standard five speed manual or optional four speed auto in both sedan and wagon bodies. Minus the usual HSV exterior additions and equipped with new 16 inch five spoke alloy wheels, Manta will be priced at about $5000 more than Holden's SS V8 and a similar amount less than HSV's Clubsport.

None of the essential HSV drivetrain hardware is changed for VS. As the company's director of operations, John Mclnemey, runs rapid-fire through the list: "Engine (185i), no change. The 5.7 litre, no change. Multipoint fuel injection is not revised in any serious way. In terms of engine and transmission control, no change. Transmissions are the same. Limited-slip cliff the same. Hydratrak, the same. "

In fact, so fur as engines and ancilliaries are concerned, there's only one new component worthy of mention. The 185 engined VS models get a new exhaust system, one which reduces decibels. 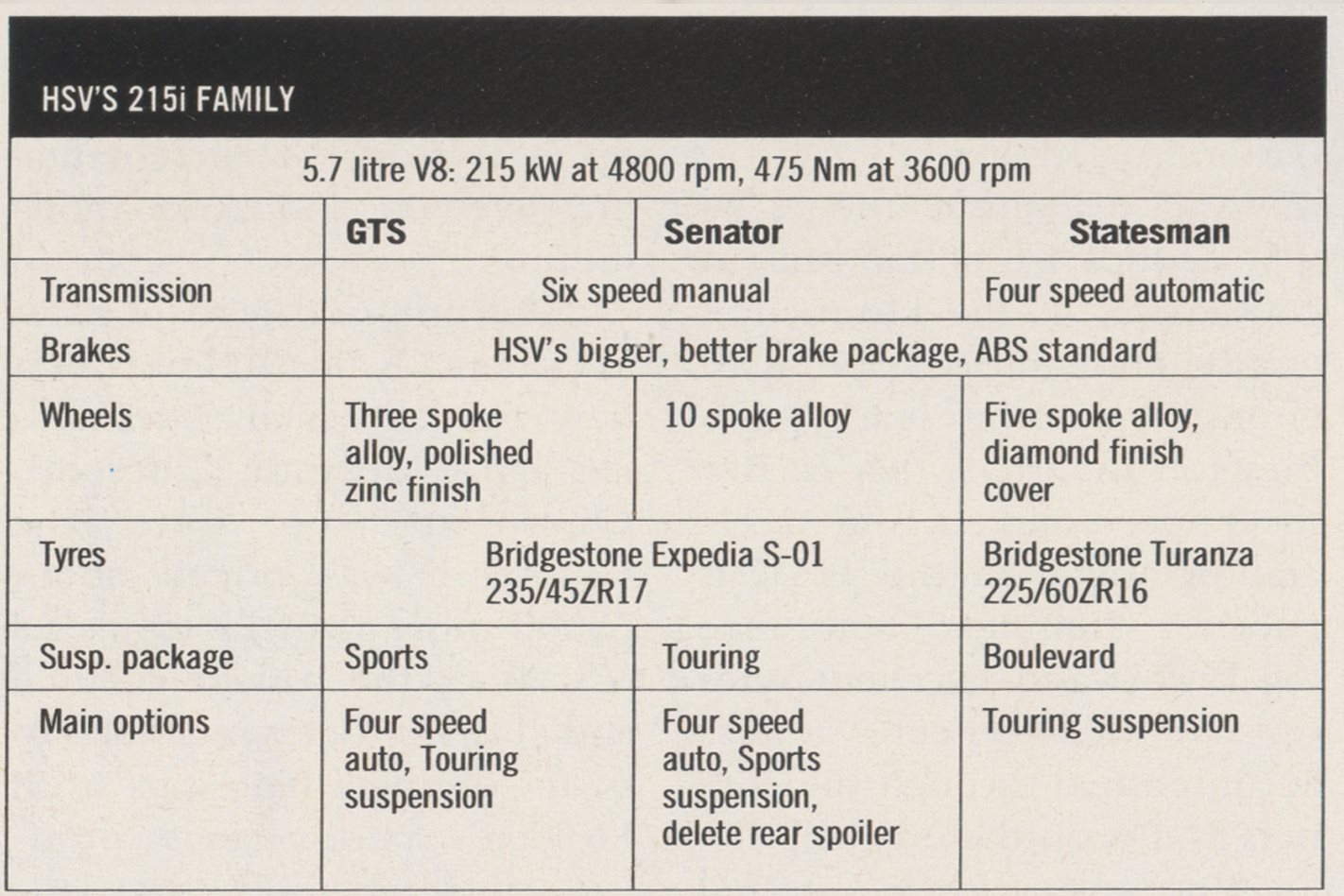 The newer exhaust of the 5.7litre was left alone. "On the low restriction thingo with the twin converters ... there's no change," he says. "It's just straight carryover."

There are, however, important changes to HSV' s suspensions. Partly because McInerney has been promoted from the position of engineering manager.

"I'm getting more and more remote, if you like, from the day-to-day engineering of the product," he adds, "and I've always had a bit of a bias towards soft springs and large diameter sway bars. There's a counter argument against this.

"Remember that – you know, just as a snapshot of the philosophy- stiffness is a fourth power function of the bar diameter. So you go up a millimetre and you think, 'what's that'? Well, it's an awful lot.

"Left to my own devices I wouldn't have done this, but the guys have gone this way and I can't argue with it."

Certainly there's a small but noticeable improvement in ride quality in both Sport and Touring equipped cars. And there doesn't seem, on the basis of a brief sampling of various engineering development cars, to be any impact on immediacy of steering response – which contributes so much to the handling personality of the HSV cars - or any gross increase in body roll.

And a brand new Boulevard suspension set-up has been developed for the slow-moving HSV Statesman models. While it's not so firm as the Touring calibration of the short wheelbase cars, it's still a well controlled and precise handling package. The Touring suspension fitted to previous HSV Satesman-based models remains an option.

The choice of Sport and Touring set-ups, where they aren't standard, is also offered on all the other HSV models. So it's possible to specify a Touring suspension GTS or a Sports suspension Senator. The only exceptions are the live rear axle vehicles, Manta wagon and Maloo ute, which come in Sports specification.

McInerney also promises improved tyre life from the excellent but expensive 235/45ZR17 tyres fitted on Clubsport, GTS and Senator. The '95 version of the tyre has been especially developed for HSV by Bridgestone. As well, HSV has fixed the front suspension geometry problems which contributed to rapid front tyre wear in the past.

The Bridgestones are mounted on two new wheels, both designed by Ian Callum, the man responsible for HSV's VR body kit. There's a dramatic three spoker, flat silver finished for Clubsport and mirror polished zinc for the GTS. Senator gets a classically good looking 10 spoker.

Manta also misses out on the new 250 km/h speedometer which is peculiar to HSV's cars. "Originally we were going to do it on the 215 cars only," says McInerney, "and then we thought: 'No, hang it, we'll put it across everything'. It's quite an expensive thing to swap instruments." Presumably less expensive is fitting the new, quieter carpet assembly developed for the VS Calais in the Senator. 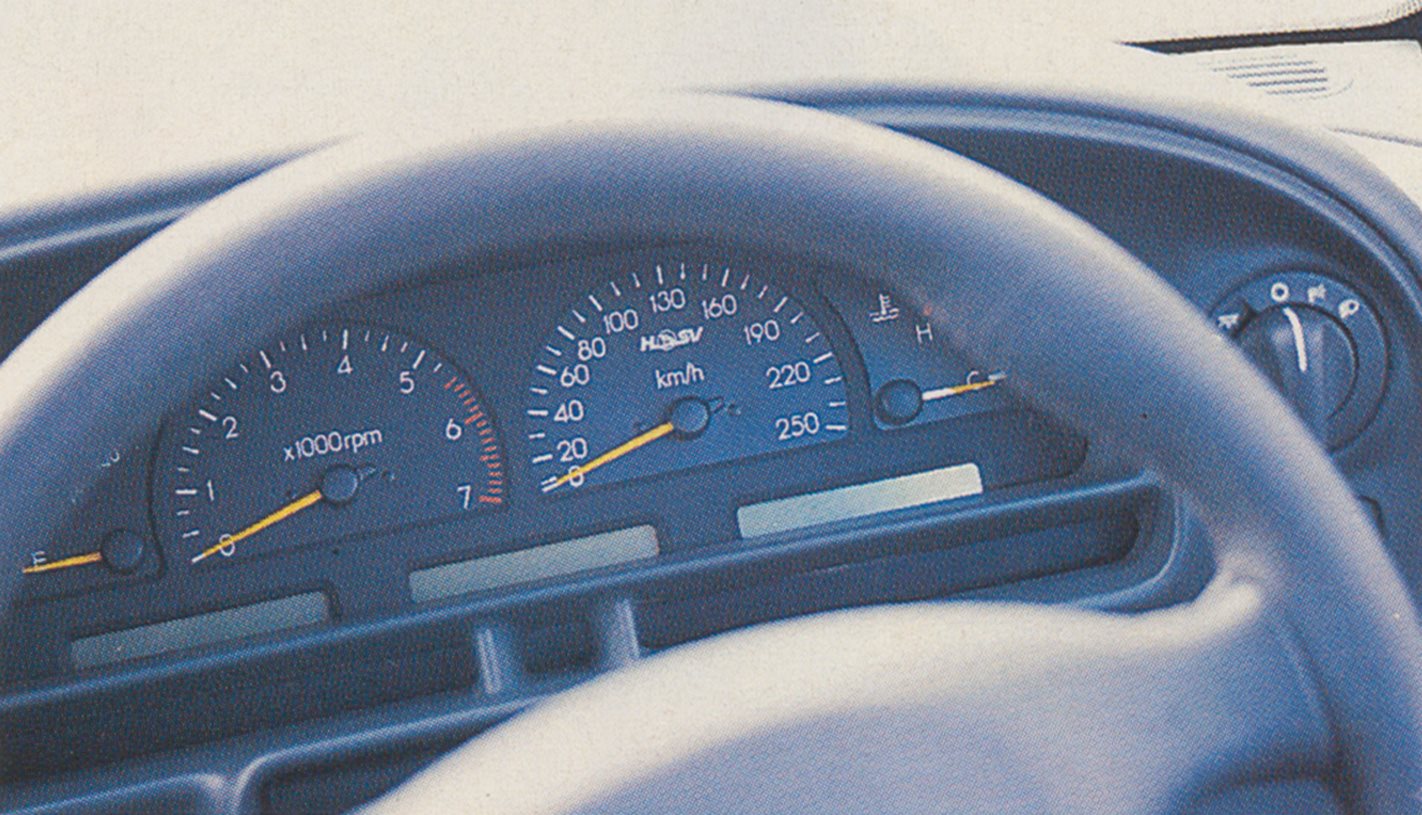 Other measures are aimed at satisfying customer requests, like luggage straps in the cargo area of everything except, obviously, Maloo, and better sounding dual horns. There's even a smarter, cheaper way to supply replacements for the numbered dash badges which are a critical part of each HSV car's identity.

Finally, a fire extinguisher is included in every model, though not in response to owners' feedback. McInerney is at pains to point out HSV's cars aren't particularly prone to catching fire.

Maybe it's simply subtle reinforcement of the idea that HSV's products are hot... 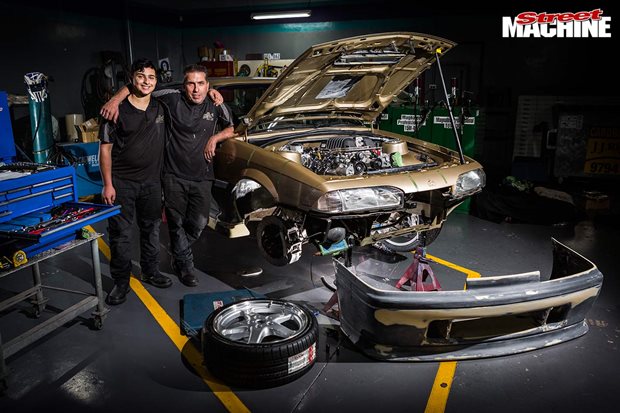 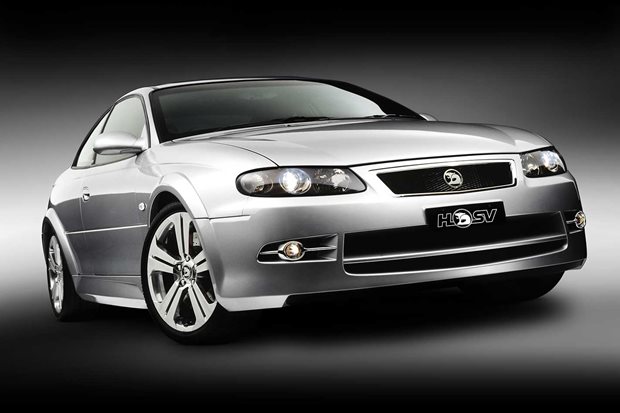 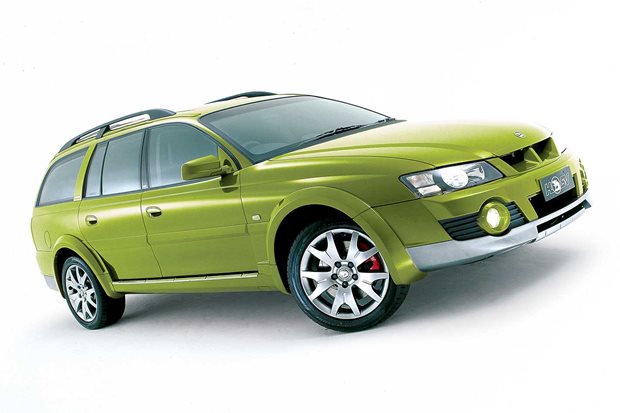 An oddball Aussie V8 way ahead of its time