No more guessing games: this is the VT in the metal. We’ve driven every model and delved under the skin of the most important Holden in 50 years.

Make no mistake - the VT Commodore is the most significant new Holden since the original 48/215.

Like that first Holden, the VT - product of the biggest design, engineering and development program undertaken by Holden in 20 years- is more than just a car. It's an affirmation of Aussie skill, ingenuity and determination; a convincing rebuff to the nay-sayers who claim you can't build a world-class car in this country.

Yes, it's that good. Commodore and Falcon have always offered outstanding value in terms of package size and performance. VT retains those proven core values, but adds an impressive dose of refinement, quality and safety innovation. 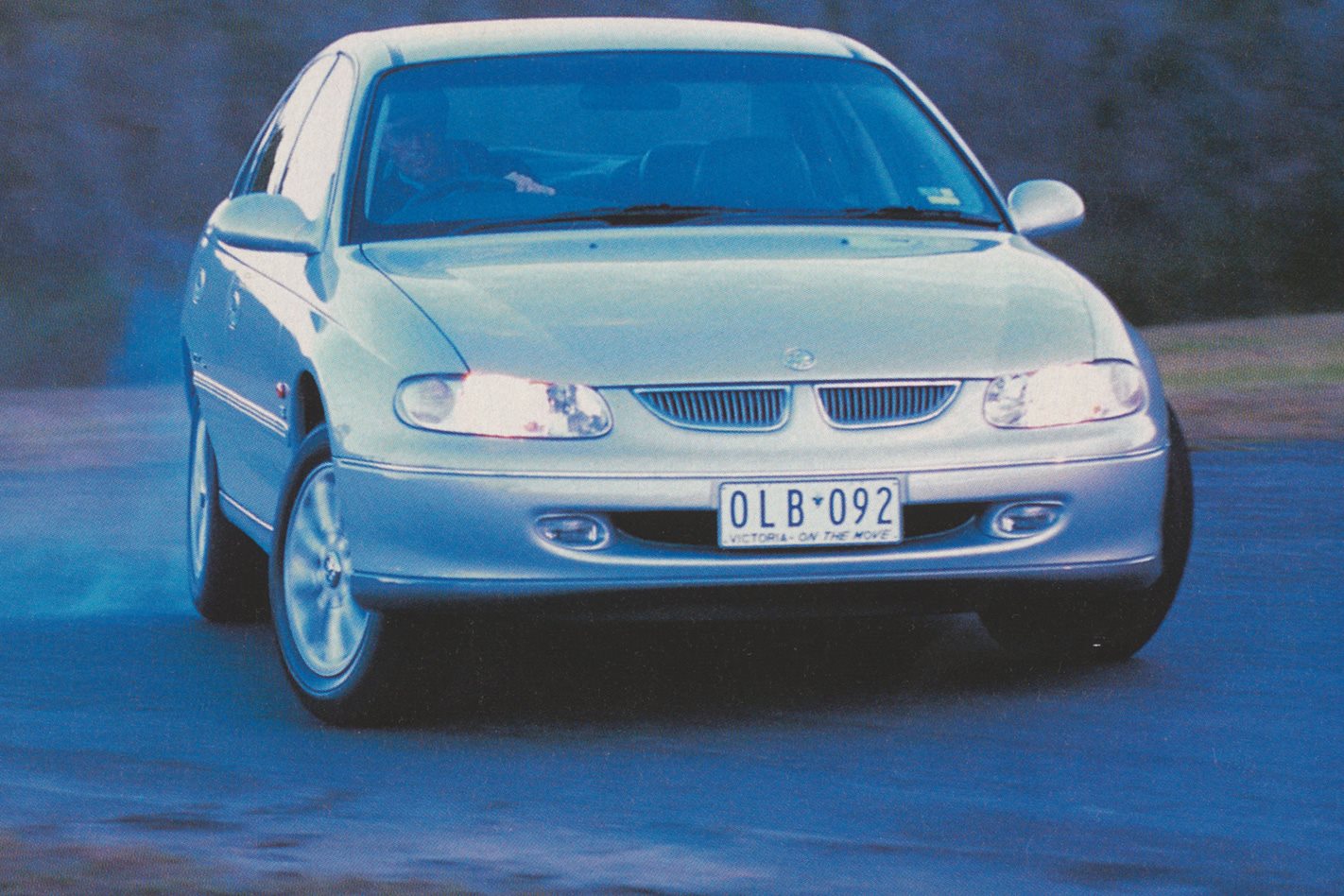 The net result is a car which now has few peers for the price anywhere in the world. And here in Australia, features such as standard IRS, driver's airbag, standard power seat height adjust and trip computer will worry Ford, Toyota and Mitsubishi.

But it's not perfect. That new body has increased the VT's mass by 166-195kg over the VS and taken the edge off performance while increasing thirst. And while GM engineers have worked wonders with the 3.8-litre Ecotec V6, it will never be as smooth as the latest generation alloy-block powerplants from Japan and Germany. Even so, VT Commodore is deeply impressive.

Impressive. Classy. Refined. They're the words which kept popping up during our preview drive at Holden's Lang Lang proving ground. Unchanged from the VS Commodore apart from new exhaust manifolds and the latest Bosch EV 6 fuel injectors, the 147kW Ecotec V6 fires abruptly on the turn of the key - which now takes noticeably less time to swap codes with the immobiliser in the engine computer- then settles down to its trademark grumbly idle. The new pistol-grip auto shifter is a touch notchy, but the four-speed auto slips as seamlessly as ever. 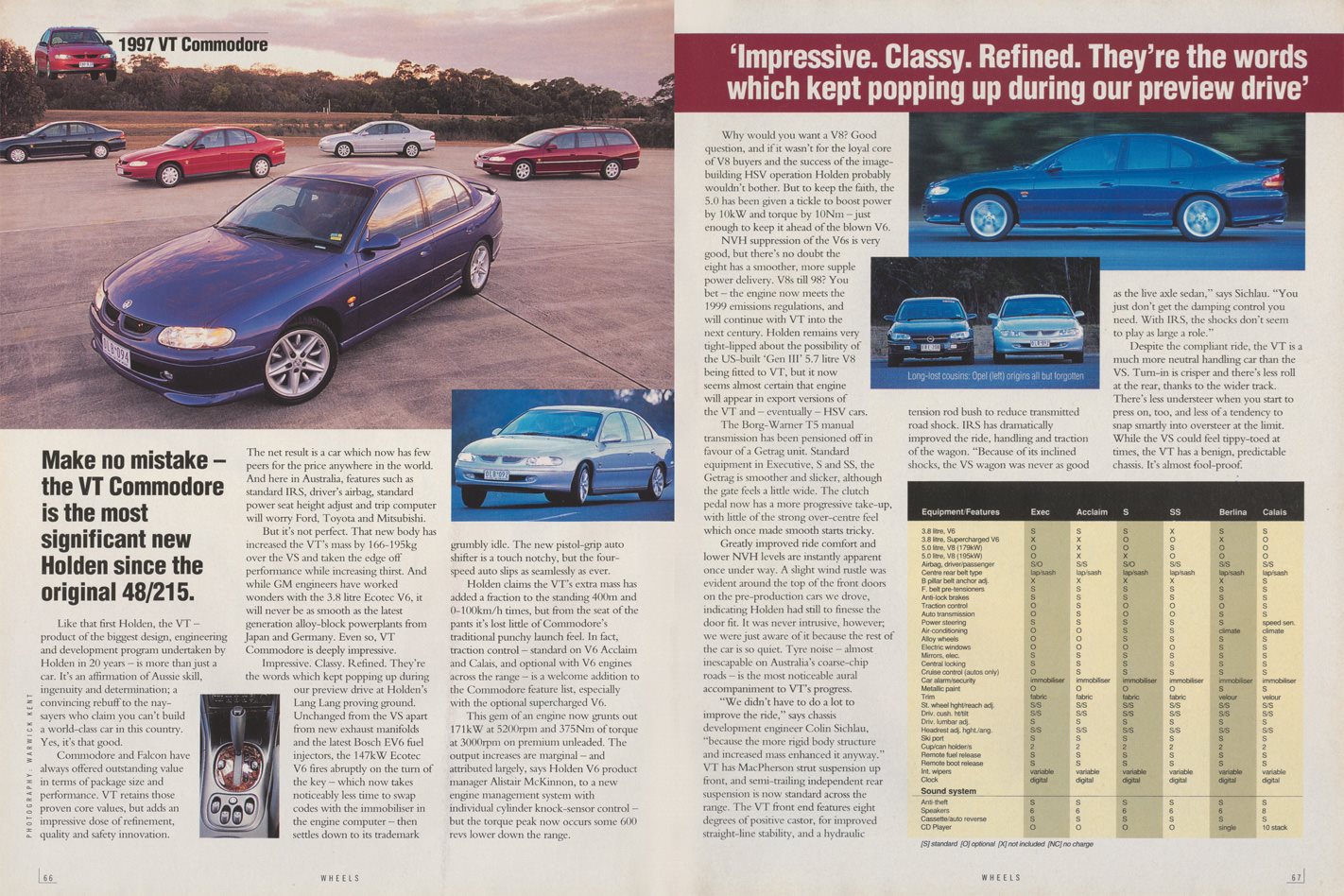 Holden claims the VT's extra mass has added a fraction to the standing 400m and 0-100km/h times, but from the seat of the pants it's lost little of Commodore's traditional punchy launch feel. In fact, traction control - standard on V6 Acclaim and Calais, and optional with V6 engines across the range - is a welcome addition to the Commodore feature list, especially with the optional supercharged V6.

This gem of an engine now grunts out 171kW at 5200tpm and 375Nm of torque at 3000tpm on premium unleaded. The output increases are marginal - and attributed largely, says Holden V6 product manager Alistair McKinnon, to a new engine management system with individual cylinder knock-sensor control - but the torque peak now occurs some 600 revs lower down the range.

Why would you want a V8? Good question, and if it wasn't for the loyal core of V8 buyers and the success of the image-building HSV operation Holden probably wouldn't bother. But to keep the faith, the 5.0 has been given a tickle to boost power by 10kW and torque by 10Nm - just enough to keep it ahead of the blown V6. 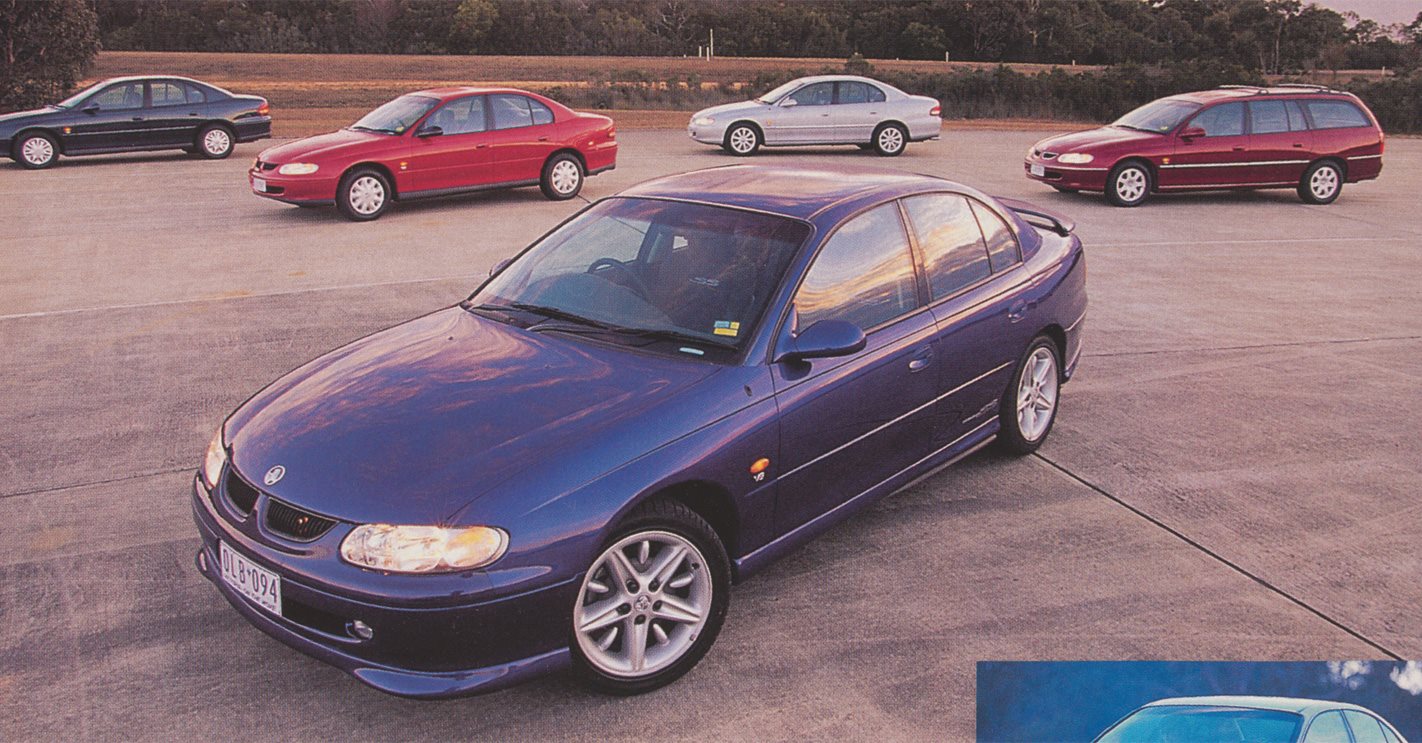 NVH suppression of the V6s is very good, but there's no doubt the eight has a smoother, moresupple power delivery. V8s till ’98? You bet  - the engine now meets the 1999 emissions regulations, and will continue with VT into the next century. Holden remains very tight-lipped about the possibility of the US-built 'Gen III' 5.7-litre V8 being fitted to VT, but it now seems almost certain that engine will appear in export versions of the VT and - eventually - HSV cars.

The Borg-Warner TS manual transmission has been pensioned off in favour of a Getrag unit. Standard equipment in Executive, S and SS, the Getrag is smoother and slicker, although the gate feels a little wide. The clutch pedal now has a more progressive take-up, with little of the strong over-centre feel which once made smooth starts tricky.

Greatly improved ride comfort and lower NVH levels are instantly apparent once under way. A slight wind rustle was evident around the top of the front doors on the pre-production cars we drove, indicating Holden had still to finesse the door fit. It was never intrusive, however; we were just aware of it because the rest of the car is so quiet. Tyre noise – almost inescapable on Australia's coarse-chip roads - is the most noticeable aural accompaniment to VT's progress.

"We didn't have to do a lot to improve the ride," says chassis development engineer Colin Sichlau, "because the more rigid body structure and increased mass enhanced it anyway."

VT has MacPherson strut suspension up front, and semi-trailing independent rear suspension is now standard across the range. The VT front end features eight degrees of positive castor, for improved straight-line stability, and a hydraulic tension rod bush to reduce transmitted road shock. IRS has dramatically improved the ride, handling and traction of the wagon. "Because of its inclined shocks, the VS wagon was never as good as the live axle sedan," says Sichlau. "You just don't get the damping control you need. With IRS, the shocks don't seem to play as large a role."

Despite the compliant ride, the VT is a much more neutral handling car than the VS. Turn-in is crisper and there's less roll at the rear, thanks to the wider track. There's less understeer when you start to press on, too, and less of a tendency to snap smartly into oversteer at the limit. 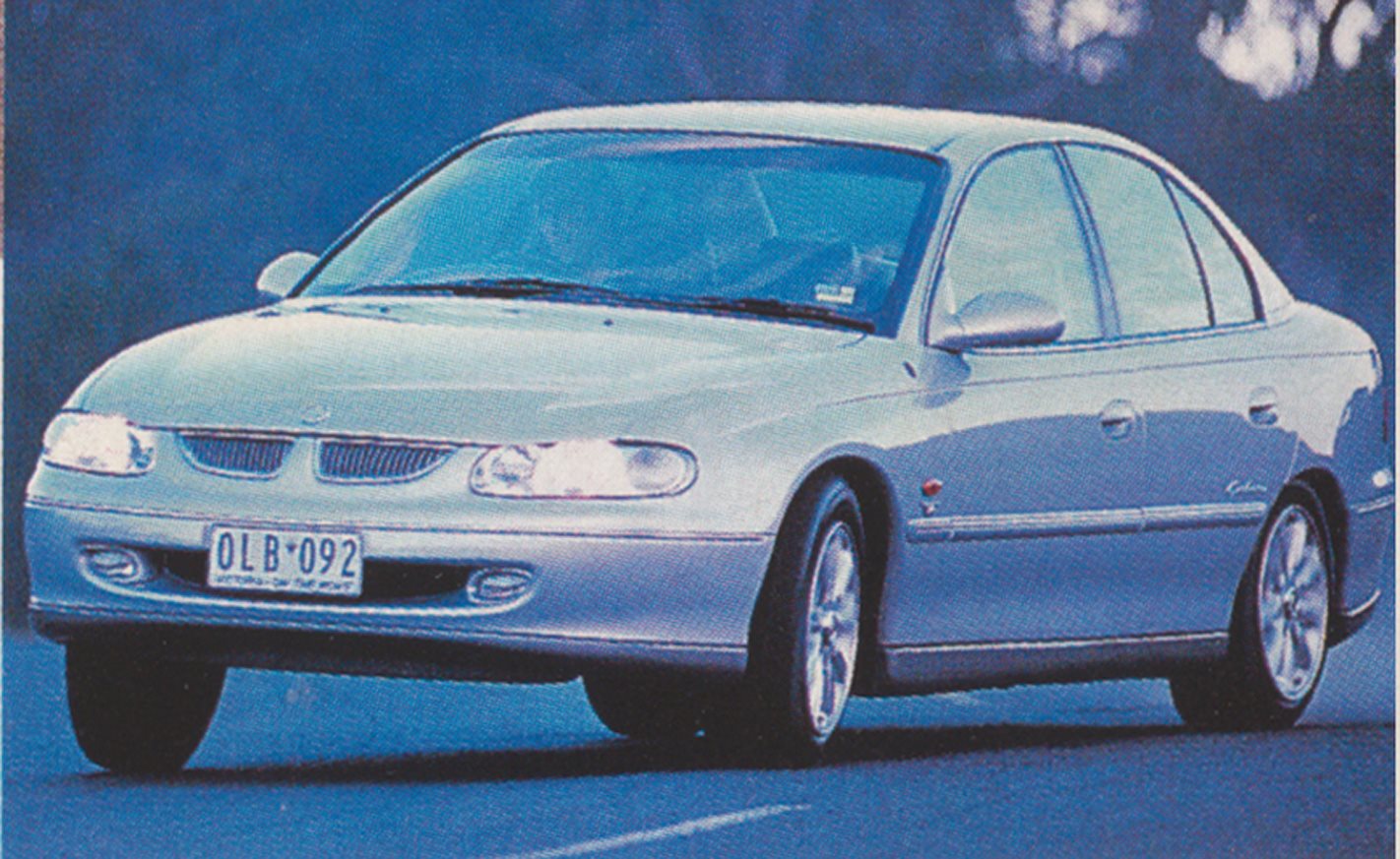 While the VS could feel tippy-toed at times, the VT has a benign, predictable chassis. It's almost fool-proof.

Most cars run a 26mm stabiliser bar at the front. V6s get a 15mm rear bar; V8s and the supercharged S 16mm, while the V8 SS goes to 17mm. The exceptions are V8s with standard tyres  and the FE2 suspension, which get a 25mm front bar to bring some balance back into the chassis. 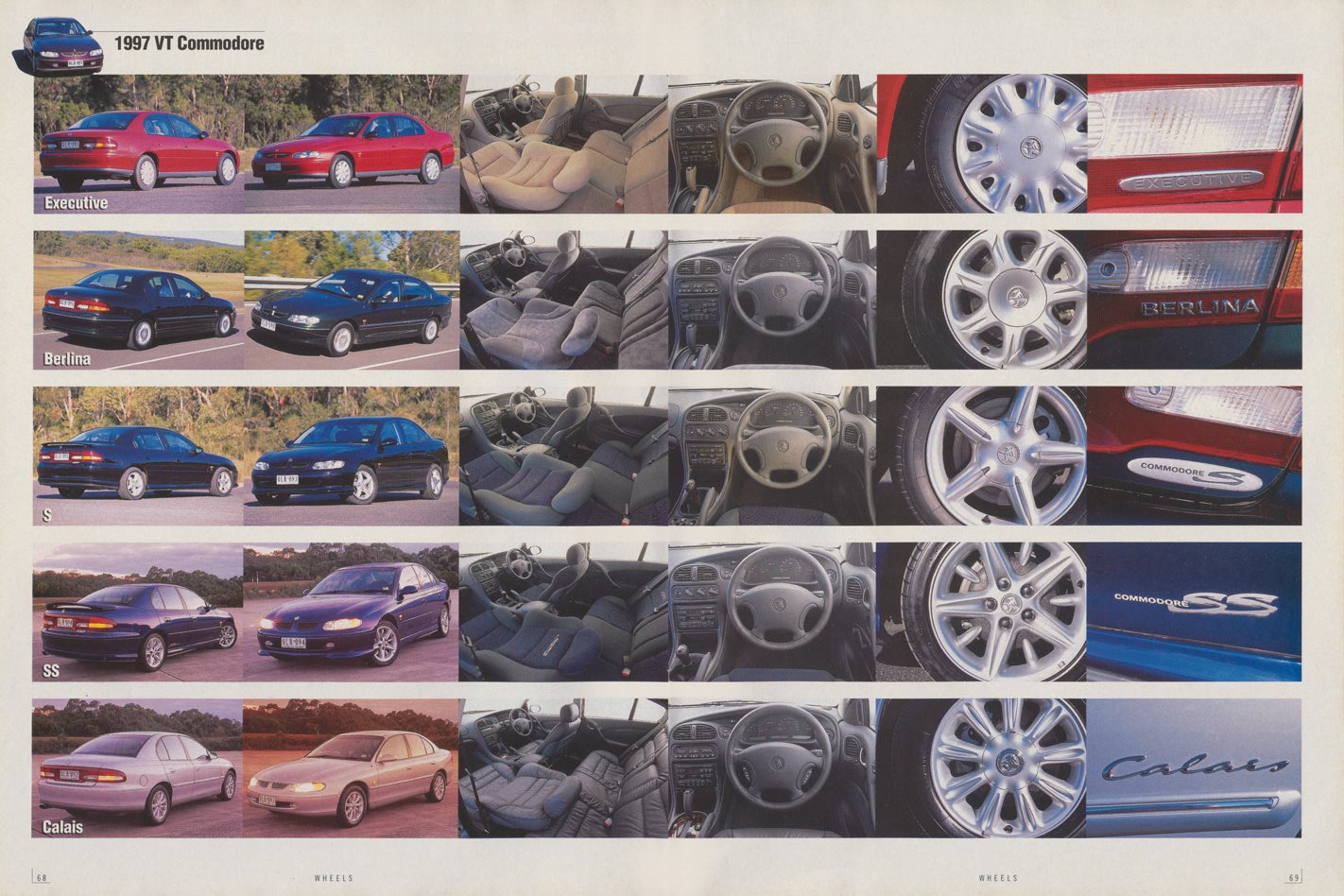 The SS underscores the fundamental integrity of the VT chassis. Despite 15 percent stiffer springs, firmer dampers and very low-profile rubber, it remains remarkably composed on rough surfaces. Balance is very good, and the steering has a fluid, linear response to wheel inputs.

The only real negative in the VT's dynamics is the Calais' speed-sensitive Variotronic steering. Beside the other cars' standard power-assisted Bishop variable ratio rack and pinion system, it feels wooden and lifeless at the straight ahead, and far less linear off-centre. Our preproduction Calais had an incorrect calibration in the system which made the steering very heavy at speed. Holden insists customers, particularly women, want fingertip steering at parking speeds. 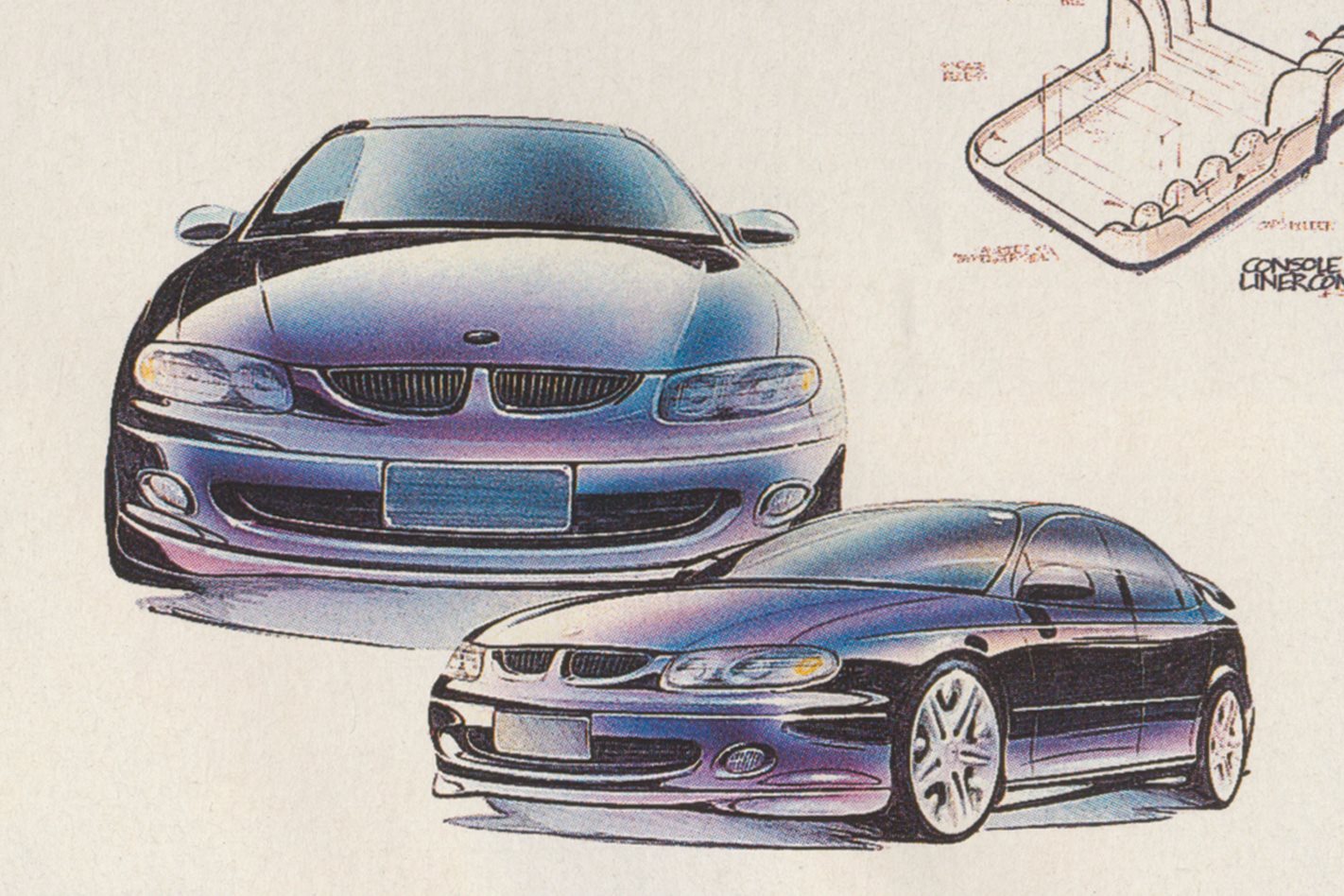 In the metal, the VT has real presence. It's a nicely detailed, beautifully sculpted form - just check the subtle ridges in the bootlid when you see one on the street. The resemblance to Opel's Omega is just that - a resemblance. As explained elsewhere VT does not share a single panel with its German cousin. The design is so tightly integrated that TWR's Ian Callum, whose design credits include the Aston Martin DB7, has struggled to make the HSV versions look as cohesive.

Badgework has been kept to a minimum and model differentiation is achieved through major items such as wheel trims. Even the Executive gets body-coloured bumpers and doorhandles, while the Acclaim gets body-coloured mirrors and a black body-side moulding. The Calais glitters with just the right amount of jewellery: chrome around the grille and side windows, and in a strip in the body-side moulding and bumpers. Of the eight new colours in the 11-colour palette, only one solid is available: white.

The SS is going to give HSV a headache. Hunkered down on 17in rims, it comes in only three colours -white, Raven (black mica with blue highlights) and Botanica, a brilliant cobalt.

Inside, the front passengers now sit 22mm further apart, and there's 24mm more fore-aft front seat travel. There's also more leg, hip and shoulder room. The interior - all new apart from carryover stalks (the only VS pieces in the car apart from the drivetrains) - is in the de rigueur late '90s soft-form style. It's elegant and well executed, however, even on the base Executive, and easily the most integrated interior yet on a Commodore. 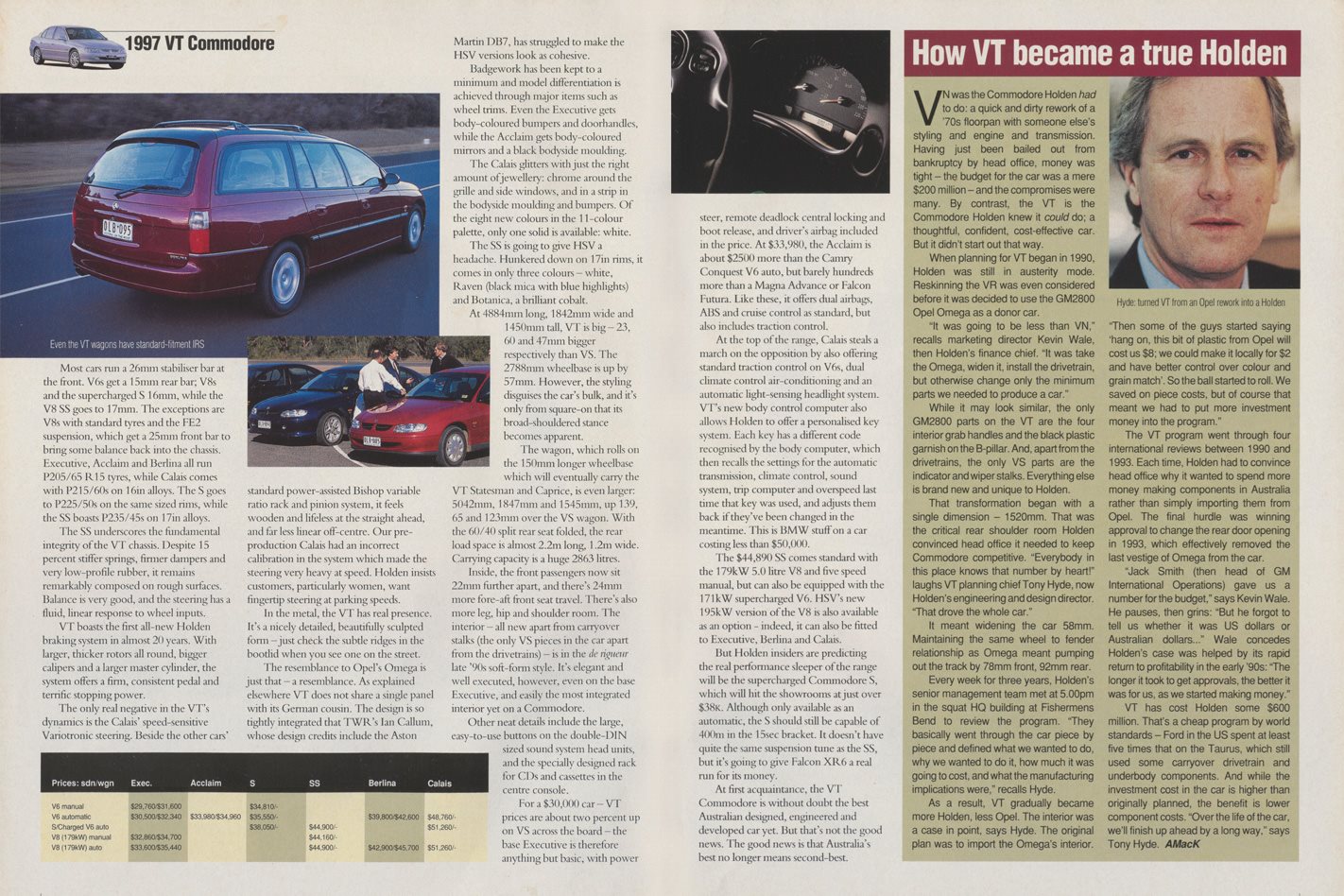 Other neat details include the large, easy-to-use buttons on the double-DIN sized sound system head units, and the specially designed rack for CDs and cassettes in the centre console.

For a $30,000 car - VT prices are about two percent up on VS across the board – the base Executive is therefore anything but basic, with power steer, remote deadlock central locking and boot release, and driver's airbag included in the price. At $33,980, the Acclaim is about $2500 more than the Camry Conquest V6 auto, but barely hundreds more than a Magna Advance or Falcon Futura. Like these, it offers dual airbags, ABS and cruise control as standard, but also includes traction control.

At the top of the range, Calais steals a march on the opposition by also offering standard traction control on V6s, dual climate control air-conditioning and an automatic light-sensing headlight system. 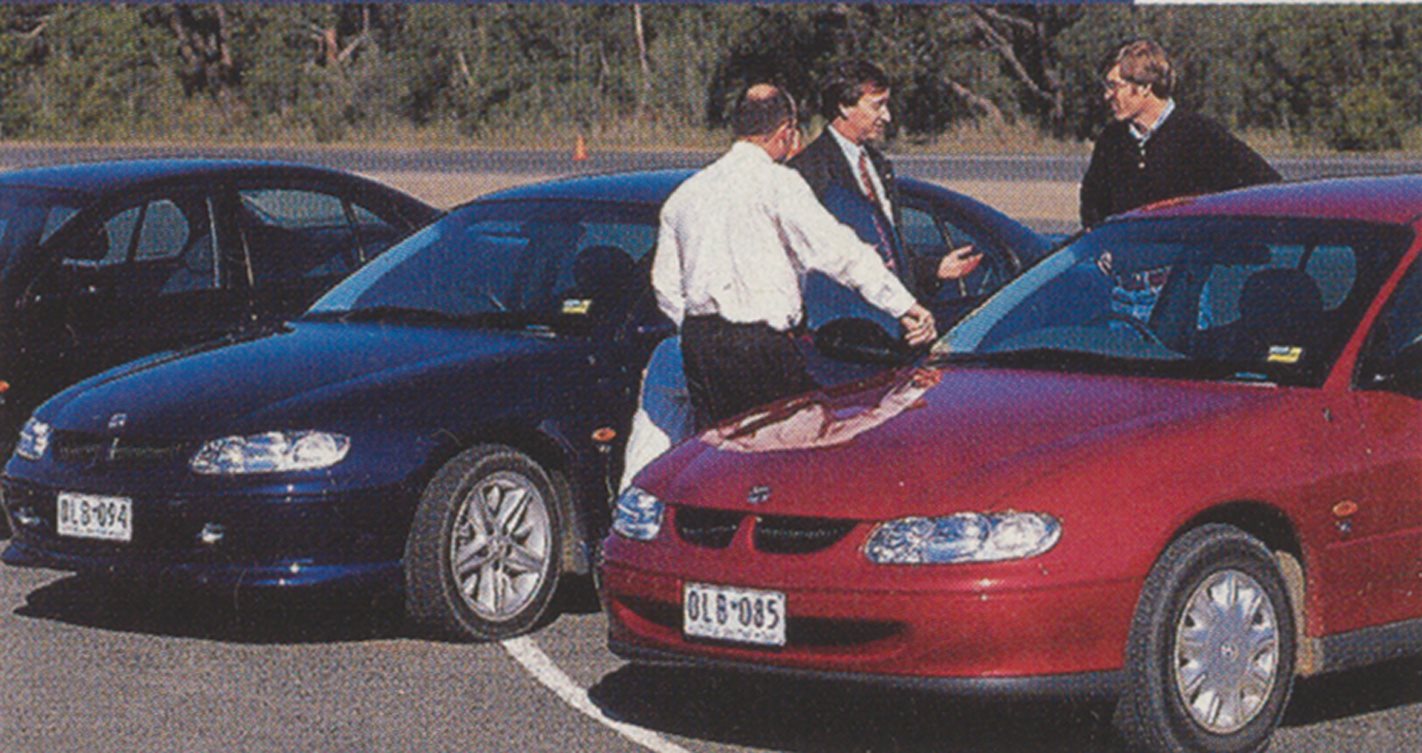 VT's new body control computer also allows Holden to offer a personalised key system. Each key has a different code recognised by the body computer, which then recalls the settings for the automatic transmission, climate control, sound system, trip computer and overspeed last time that key was used, and adjusts them back if they've been changed in the meantime. This is BMW stuff on a car costing less than $50,000.

The $44,890 SS comes standard with the 179k W 5.0 litre V8 and five speed manual, but can also be equipped with the 171kW supercharged V6. HSV's new 195kW version of the V8 is also available as  an option - indeed, it can also be fitted to Executive, Berlina and Calais. 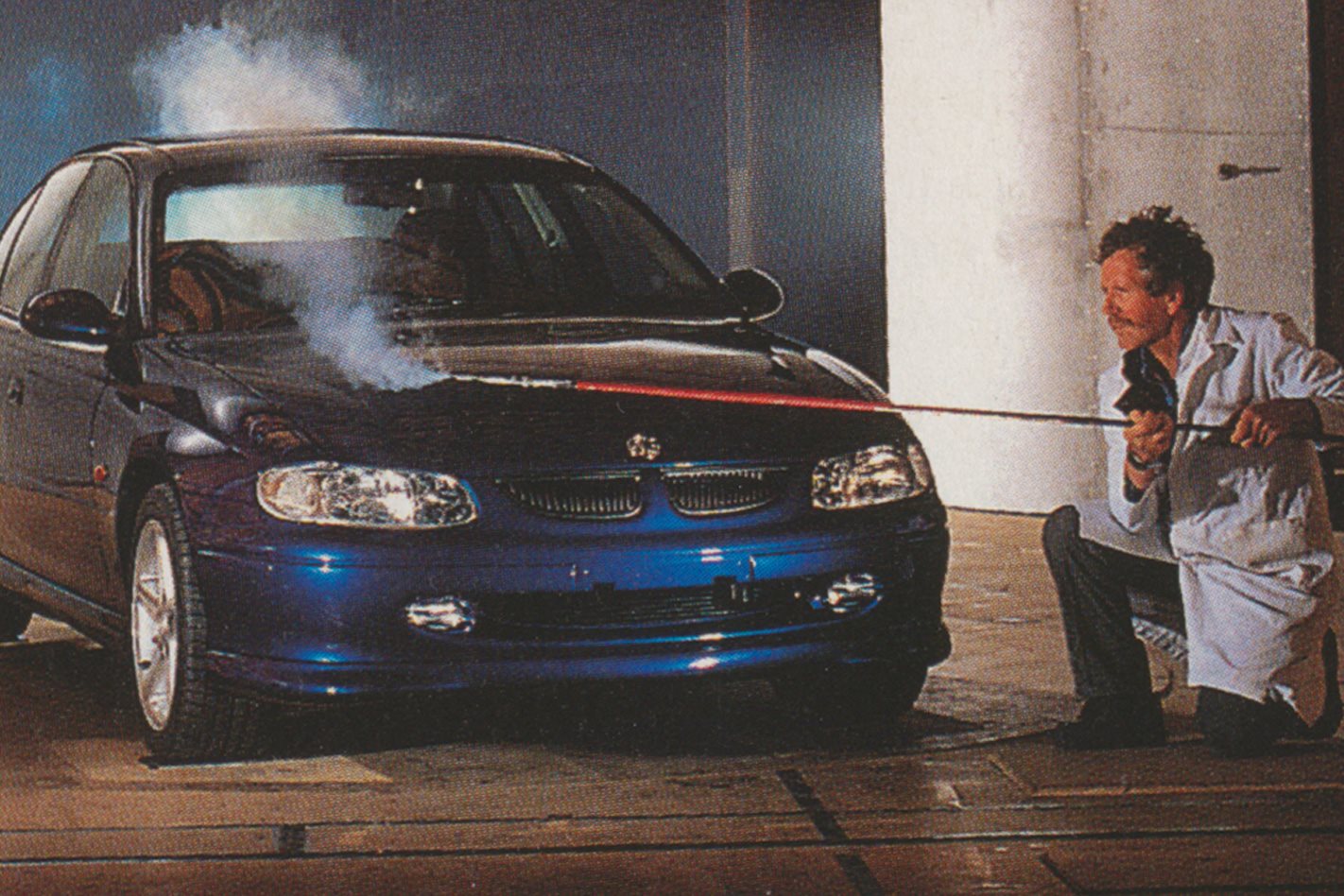 But Holden insiders are predicting the real performance sleeper of the range will be the supercharged Commodore S, which will hit the showrooms at just over $38K. Although only available as an automatic, the S should still be capable of 400m in the 15sec bracket. It doesn't have quite the same suspension tune as the SS, but it's going to give Falcon XR6 a real run for its money.

At first acquaintance, the VT Commodore is without doubt the best Australian designed, engineered and developed car yet. But that's not the good news. The good news is that Australia's best no longer means second-best.