It's a beast with a brain - combining high-tech engineering and old-fashioned attention to detail.

Godzilla's back! And it's meaner than ever. Fully 18 months after the launch of the all-new Skyline range in Japan, cash-strapped Nissan has finally unveiled the successor to one of the world's finest sports coupes.

The good news is that Godzilla II is quicker than ever – Nissan insiders claim standing 400m times in  the mid-13 second bracket and say the new car has lapped Nurburgring 21 seconds faster than the old one. The bad news is that Nissan is still dithering over whether to export its Porsche crushing supercar.

Its tortuous evolution hints at the turmoil within Nissan, which is still reeling from the collapse in sales and profits following the bursting of Japan's bubble economy.

And its dimensions - longer, wider, taller and heavier than the old car - are not clever in a business where, increasingly, smart car companies are finding less is more. 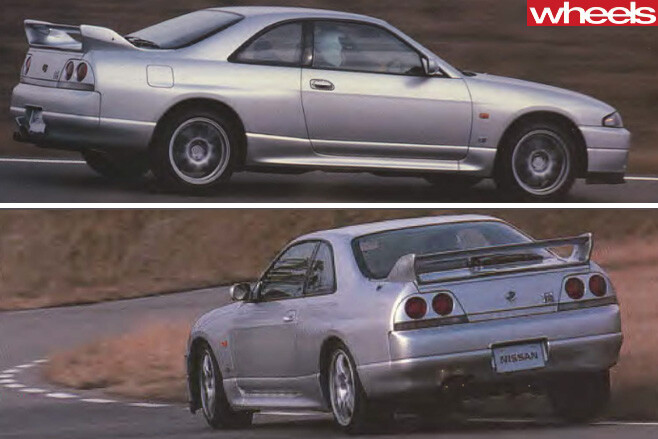 The reason is not sloppiness on the part of the GT-R engineering team, but cost – instead of having a unique platform, the Skyline range is now built on the same underpinnings as the larger, heavier, more luxurious Laurel (a Cressida competitor in Japan) to save money. That's why the new GT -R is 130 mm longer overall and rolls on a 105 mm longer wheelbase.

Nissan previewed the new GT –R alongside the rest of the Skyline range at the 1993 Tokyo Show. Every panel is brand new, though Godzilla II's styling is clearly evolutionary rather than evolutionary.

The muscular bulges over the wheelarches and dual afterburner tail-lights are familiar Skyline call signs. Since Tokyo, Nissan has also rejigged the front grille and bumper assembly, and added a race-style four way adjustable rear wing.

Nissan claims the wing, the deep front spoiler and the subtle side skirts help the new GT-R achieve a Cd of 0.35, compared with the brick-like 0.40 of the old car. Not that you could tell the difference hot lapping the Ginza ...

To boost body rigidity, Nissan has added braces front and rear to tie the suspension strut towers together, a stiffening panel behind the rear seats, crossbars in a thicker floorpan, larger cross section centre pillars and stronger sills. The extra steel accounts in part for the GT -R's 1530 kg kerb weight - up 100 kg on the old car - but Nissan has tried to make amends by stamping the bonnet and front guards in aluminium. The saving? 12 kg. 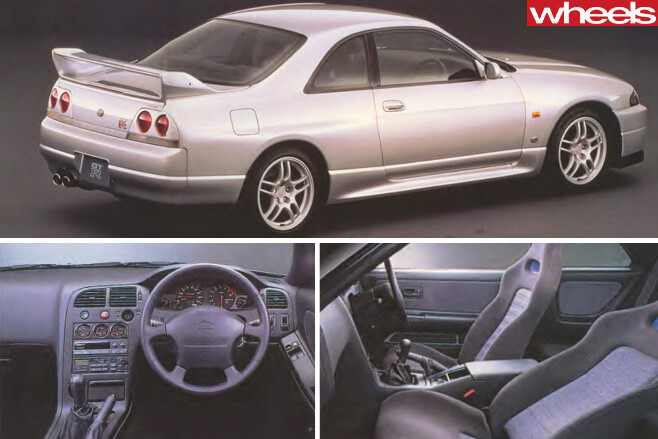 All new though eerily familiar, Godzilla II's interior has a new dash, new instrument binnacle - with fake carbon fibre around the dials - and a new airbag steering wheel. But the presentation of the centre console, with its three auxiliary gauges - boost, oil temperature and torque split - and sound system pack, looks almost identical to that of the old car. You can have it in any colour you want - as long as it's dark grey.

If you want a real deja view, however, just lift the bonnet. The mighty 2.6 litre twin turbo RB26DETT in-line six looks like it has been lifted straight out of the old car - which is basically what happened.

There's a new oil filler cap, and a beautifully crafted race-style adjustable brace anchoring the front strut towers. But otherwise the engine bay is identical, right down to the graphics on the cam cover and plenum chamber.

Nissan claims the engine delivers the same power- 206 kW at 6800 rpm - as in the old car, but is unlikely to advertise an increase for fear of violating the Japanese industry's agreement to limit production car outputs to 221 kW.

The factory says the new car's extra performance comes from a three per cent increase in torque to 367 Nm at 4400 rpm, new lightweight ceramic turbochargers which enable the engine to spin more rapidly to the redline - and a trick new computerised four-wheel drive system which boosts traction.

The system is a development of the existing ATESSA E-TS electronically variable torque split transmission, which varies the amount of torque fed to the front wheels from zero to 50 per cent, depending on data from sensors monitoring vehicle speed and lateral force. In simple terms, the car is set up as a rear-wheel drive, with torque being progressively fed to the front wheels as the rears break traction.

In the old car the system produced prodigious grunt out of corners with little of the understeer normally associated with four-wheel drive.

Former HRT driver Win Percy described it this way after a session with the car at Eastern Creek: "The initial turn-in is good, but until you've got the confidence it feels as though it's going to understeer quite badly.

At the same time, a sensor feeds the yaw rate back to the computer controlling the system for comparison with pre-programmed target values. The computer then adjusts the rear wheel steer angle. Nissan claims the system enhances stability on rough roads and at high speed.

Other upgrades to chassis hardware include the adoption of Brembo brakes all round and detail improvements to the multi-link suspension. The upper link of the front suspension is now a two arm fabrication for increased camber stiffness. Rear suspension travel has been increased to improve tyre contact with the road. 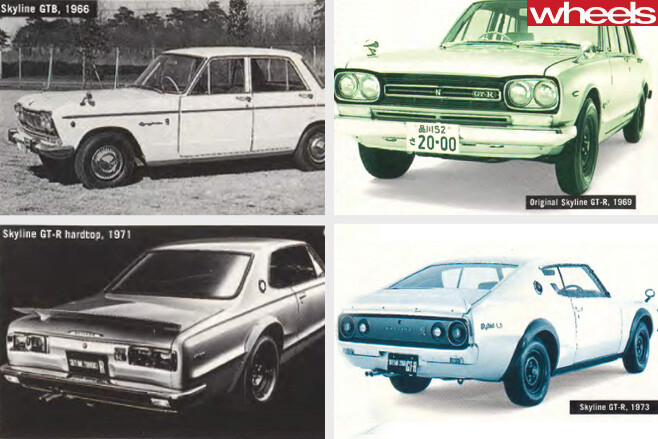 Key to this system is a computer controlled limited-slip diff which combines with the four-wheel drive and steering electronics to ensure optimum traction under all conditions. V spec cars also get stiffer spring and damper rates for even better on-the-limit handling.

Such high technology chassis engineering combined with good old-fashioned attention to detail - Nissan even moved the battery to the boot to improve weight distribution - rather than a big increase in horsepower gives the new Nissan Skyline GT-R the edge over its illustrious predecessor.

Nissan quotes a standing 400m time of 13.5 seconds- running two up, with a full tank of fuel, at an ambient of25 degrees C. That's a full 0.4 sec quicker than the factory quoted time for the old car - and 0.2 secs under the time Wheels Correvit time in 1990. The queue starts here ...

PRINCE MOTORS LAUNCHED the original Skyline in 1956 as a 1.5 litre four door featuring a de Dion rear axle, quite an unusual feature for a mid-'50s Japanese car wrapped in an unadventurous body. lt evolved into the big Nissan Gloria. Though part of Nissan today, Prince Motors started out as a spin-off of Nakajima Aircraft - another, larger offshoot became Fuji Heavy Industries. maker of Subaru. The second Skyline, in 1964, introduced an alternator, 54 kW ohc four cylinder engine and optional front disc brakes to the Japanese mass market- and was the basis for the GT-R's real ancestor, the original Skyline GT. Under the auspices of Skyline program manager S. Sakurai, the car was chopped off at the cowl, 200 mm grafted in for a longer engine bay and a 2.0 litre Gloria ohc six slipped in.

Sakurai swapped the Gloria's single carby for a set of triple Webers, which boosted output to a then astonishing 95 kW, and voila! - Japan's first performance sedan, which was shipped to Australia in small but significant numbers.

Prince, by then owned by Nissan, went ahead with the third generation Skyline (again under Sakurai-san). The debut Skyline GT-R carried Japan's first four valve twin cam, a 2.0 litre six reputed to develop at least 25 kW more than the 'official' 125 kW rating. The GT-R was launched as a four door, but in 1970 a short wheelbase two door hardtop was supplying the basis for the hottest (and most successful) of Japan's touring cars. In 1973 Sakurai and company popped a third generation GT-R (based on the 240K two door hardtop), the last of the line for some time.

The now legendary 1990 Godzilla was the handiwork of a team headed by program manager K. Watanabe. The latest bowed under S. ltoh and seems to work as well as the original - so, we assume, does the development group.

Niche and Nasty: 'Just Do It'

Australla was the only market in the world outside Japan where the previous GT-R was sold with full compliance and warranty. But that's no guarantee we'll get the new model, according to Nissan insiders. Nissan Japan steadfastly refuses to develop the GT-R for export, despite performance and handling which put it among major league supercars. This curiously myopic attitude robs Nissan of the potential to use the GT-R as a niche image builder, the way BMW uses the glorious M3 coupe. The previous GT -A arrived in Australia because then Nissan Australia chief Ivan Deveson brought in a limited number of road cars to support the company's on-track activities with Fred Gibson's works-backed GT-R race team. Marketing guys liked the idea; finance guys, who'd been told the program might just break even, hated it. In the end, says former Nissan chief engineer Don Dunoon, it came down to Deveson simply saying "do it”.

Dunoon went to Japan, figured the GT-R could be adapted to meet ADRs, and persuaded the Japanese to agree. "Their attitude was very strange,'' he recalls. ''They gave me some cars, but basically said 'we don't want to know'."

Dunoon's small team embarked on a six month ADR program. The budget was a modest $250,000. The first thing they did was disconnect the 180 km/h speed limiter. Running the GT-R flat out for sustained periods revealed shortcomings: the diff, gearbox and transfer case oil temperatures all soared. A special transmission oil cooler was one of 250 changes the Australians made to meet ADR and durability targets.

Other changes included side intrusion bars, new muffler and windscreen, changes to the instrument panel, and a complete rejig of the rear lights.

Dunoon also wanted 17 inch wheels and bigger brakes - both features of Godzilla II. Head office engineers had components on the shelf but the marketing department said no. "lt's the one area where we could really have made the car better." he says.

Nissan Japan was also persuaded to batch build all 100 GT-Rs destined for Australian in one hit, complete with the Australian spec windscreen and muffler. Each GT-R then required a further 50 hours of work at Nissan's Clayton plant before being released to dealers to fit intrusion bars and tail-lights, among other tasks.

With Nissan Australia now merely an importer, ADR compliance work would have to be done in Japan. This would push the GT-R's pricetag to $190,000 by the time it reached Australia, almost 75 per cent more than the old car.

The price wouldn't scare off Kevin Jarrett, pictured, who has logged 25,000 km in his two-year-old GT-R. lt has been utterly reliable in both daily driving and hot laps of Oran Park. Having owned Porsches and Ferraris, he reckons there's no better high-performance buy. "I don’t know what I'd replace it with, apart from the new GT-R."