FORMER Wheels editor Bill Tuckey used a number of clever ways of making readers think the magazine had more resources – and reach –  than the smell of an oily rag allowed.

First published in the May 1968 issue of Wheels magazine, Australia's most experienced and most trusted car magazine since 1953.

Rather than send staffer Tom Floyd to Gilltrap's Auto Museum on the Gold Coast, Tuckey asked him to pen a series of letters between journalist and editor to write a story on a landmark that Wheels never officially visited.

Read former Wheels editor Peter Robinson’s tale about how this story came to be written.

I wasn't too excited about this assignment when you first suggested it - besides, I somehow got stuck with that lunch bill and missed seeing the mini-skirt parade down George Street. Maybe the mood was wrong. Anyway, I take it all back.

Gilltrap's Auto Museum is the best thing since bottled beer.

I left Sydney the afternoon I last saw you. I followed the coast road right through Casino, then stopped off at Tweed Heads for one of those pineapple bombshell things (you know the one you shake up with one part vodka - bill enclosed) and won a race down into Coolangatta with a tattered old Ford Falcon with Victorian plates.

Well, tomorrow I'll find where Gilltrap keeps his old cars, and drop you a line then. 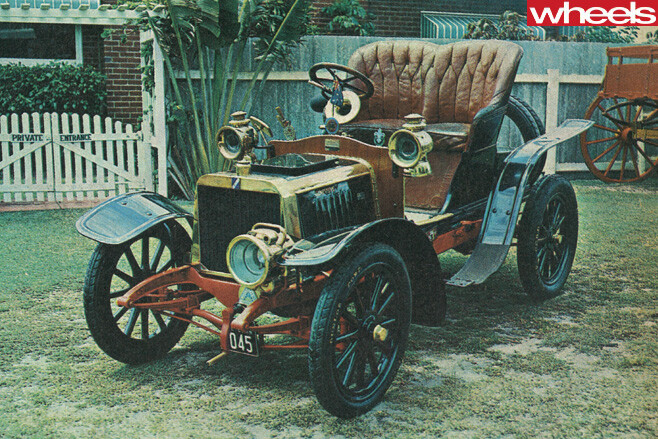 Sorry, I cannot permit payment of expense cheques outside routine costs of your assignment.

The pineapple bombshell bills are returned herewith since the weather bureau verified Tweed Heads was experiencing cool weather and you needn't have stopped, and we doubt the other bombshells were really in line with the assignment.

Please shorten your letters; that is, if you must write at all, for we are too busy at the office to bother with them. Follow through with your assignment and hand in your story upon returning.

I found Gilltrap's place today. Of course, I had the usual trouble as there really aren't that many signs pointing in his direction, so I went to a local coolie-bar (they just happened to sell pineapple bombshells) and finally found where I had to buy my ticket (receipt enclosed).

The museum is on a corner of the highway at Kirra, near a pedestrian crossing where all these beaut brown birds walk all day.

There's a big sign over the top and the windows are full of old gear like policemen's helmets and brass snuff boxes.

There's a big lobby lined with souvenirs and what looks like a helluva reference library. I have to go back and help an old lady over the pedestrian crossing, but you said to keep letters short anyway; so I'll write tomorrow.

Your instructions were to check with Miss Robyn Gilltrap for admission. Please do not send any more correspondence COD.

Please get on with assignment. Need story in our office by Wednesday next.

This is a gas fab pad. Seems it was all started by George Gilltrap, who was born in Ireland and died in March, 1966. He migrated to New Zealand and worked as a bullocky, then a tractor- demonstrator, and kept buying pre-1914 cars. After the war, you know, the second one, you grimy old veteran, you. He started a contracting and war surplus business.

He opened a small museum in Rotorua in 1954 but got a bit annoyed (who wouldn't?) about the lack of future in New Zealand and moved with 24 cars to Kirra in 1959. They opened an extension last December to bring the floor space up to 10,200 sq ft and they put through about 100,000 people a year.

How about that? At 50-cents a head for adults? Who said they don't make it like they used to?

OK? Robyn and I are just going out to lunch to talk business, so will drop another note tomorrow.

We trust that Miss Gilltrap took you to lunch. We cannot imagine why you are spending so much time at Gilltrap's, but suggest you find less expensive quarters. Please stop putting sketchy details in your letters and make up a complete story. Hurry with the assignment, as deadline is approaching. 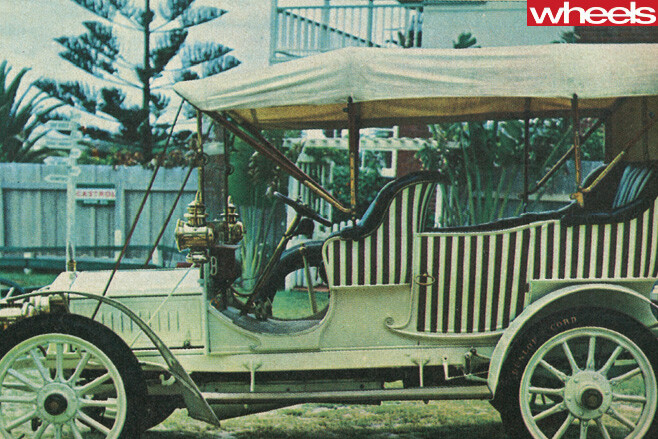 This place would snap your brain. I just can't wait to get down to writing the story. Gilltrap's is all Dunlop Cord tyres and twinkly brass and bulb horns and pin striping… they've got cars from 1899 right up to a first Holden and a 1955 Ferrari Super Squalo - you remember, the one Arthur Grimths had in Queensland and then Des Kelly bought it to race at Lowood. Ol' Des got killed on the speedway not long back, but he sold the big Fazzazz to Gilltrap's.

That car really turned me on, until Robyn dragged me away to show me the last thing George Gilltrap ever bought.

It's a teeny bopper of a 1925 baby Caterpillar tractor they found in Tully. Man, you feel you could pack it in your briefcase.

Then there's tractors from 1900, 1910 and all that, including something called a 1916 Rumley Oil Pull, and three locomotives and 11 motor bikes from 1901 to 1929 and a dangerous-looking plane they tell me was the first Flying Doctor gizmo. Great stuff!

But listen, the best of all; you know in Harrah's and Montague's how you all gotta stand around and look and whistle and say gee whiz looky at that and that's the whole bit? Well here, buddy, they run the bombs around and give rides and what else! They do! Robyn Cherie said it's probably the only museum in the world that does this and that this was always her father's idea because he liked people to see and feel the link between animal power and engine power.

They put all the speckies up in a small grandstand and then start up things like the 1908 Vulcan which they've just finished restoring. It's done in chocolate stripes over cream, and Robyn Sweetie says that you could order this (it's called Roi de Belge, but I'll leave all these details for the story) to match your Edwardian blazer. Hot deal! This could be bigger than Boney and Claude, those Mafia pair.

Then this guy stops bloop-blooping around in the cars and digs out these crazy bikes. There's an 1870 Boneshaker - you wouldn't believe this! It's solid iron right through and on the smooth concrete floor it gives the guy a hernia every third session. Then he gets out on an 1875 Penny-Farthing and then an 1886 Humber Tandem Tricycle in which the lady sits out front between two huge spider-thin wheels and the gent pedals along in back perched above her. They must have had good morals in those days, for that bike's a dead loss for lover's lane if ever I saw one.

Anyway, I'll start writing all this stuff tomorrow, because I have to continue my research tonight at the High Bonnet restaurant; the owner, Gordon Bedson (a really good wine buff, incidentally) is a distinguished aeronautical and mechanical engineer who also makes a mean baron of beef. Enclosed please find receipts for $40 expenses including lunch for Gilltrap's publicity officer.

Find non-refundable expense receipts for $40.00 herewith. Stop spending our money! And we must ask again that you not send letters unstamped. Another reminder that deadline for the issue is nearing and that next Wednesday is final production day.

Try and find out how many old cars are in the Gilltrap museum and let me know. Try and add more detail to your letters; the place sounds intriguing.

This story gets bigger every time. I'll start writing it tomorrow. Did you know that at the museum they have a full souvenir kit of the veteran rally that never was? Honestly, these old car guys keep all the good secrets. Apparently they planned a big deal International rally for Ireland in 1966 and at the last moment had to call it off because of one of those shipping strikes the Pommies are always having because Till Death Do Us Part changes time slots or something. Anyway, Mrs Gilltrap (she's now managing director of the show) brought back souvenir programs, ashtrays, passes, vouchers - all the gear to go visit a raliy that was never held.

And get this - in this new extension they have a fifty-fifty Ford Model T. No really! Half of it's restored; the other half is just as they found it- rust, chicken droppings, springs poking through horsehair and all. It's weirdsville!

Robyn says that the old side will just get older. Appears they only restore about four cars a year, and Gold Coast blokes do the trim and paint work for them. One of them is an old stager who still remembers how to do button upholstery, but they find it hard to get good pin-striping. Down the road apiece is a storage shed with about 20 cars in bits and pieces, plus bins of spares.

Just- met Terry: He's Miss Gilltrap's brother. Big fella. Nice man. He seems to know most of what's going on in the museum. He showed me a 1912 Panhard-Levassor that they're going to restore in time for the 1968 International Rally. Hope there's no shipping strike for that one. The 1970 Rally, incidentally, is scheduled for Australia. Terry says they found the 1908 Vulpan and the 1901 steam Locomobile together with the Panhard in one heap a few hundred yards away. The Loco was apparently built under Stanley patents, with a 926cc engine.

Oh, how many cars? Do you mean complete or in bits? I'll have to count them all. Let's say 150. Why do you want to know?

Anyway, it took me more than three hours to see the building; can I have a day's extension on deadline?

Enclosed a bill for $51.86 for dry-cleaning incurred while climbing up on a 1913 Dennis fire engine.

You didn't mean that fired bit. You're just working too hard. Now look; I don't know what you're after. I had a look in their library of 1000 books and magazines (Miss Robyn says Australian motoring history fascinates her and she's busy cataloguing and indexing all the references she can find) but I didn't do any good. Just to be sure I took another hour's walk through the museum. Up on the walls they have radiator grilles from everywhere - a 1922

Just in case not, I've extended my research. Down one hall, just near the old Cobb and Co coach from Cunnamulla, there are some display cases. In there, in the middle of some real hoary old spark plugs and trembler coils, I found a Wright' Cyclone aircraft engine piston with a 6in. bore and weighing 5lb 12oz, a 1913 Rayfield updraught carburettor and a 1935 Spartan Adjustable Chime Bugle Horn.