IT Happened One Night (1934), Night of the Hunter (1955), Gallipoli (1981)… these and many more movies co-starred a Model T. For this film-loving car nut, the sight of Ford’s go-anywhere jalopy represents two worlds colliding.

Read part two of Wheels Bucket List in the May issue, on sale now.

Nicknamed Tin Lizzie, it wasn’t the first car, or even the first Ford. But Henry Ford’s radical mass-production techniques made the automobile affordable, changing the world as new roads and then towns opened up before it. Some historians reckon the very fabric of society was altered forever.

Like old Henry himself, the Model T was a flawed genius that demanded things were done a particular way, and so it’s infamously difficult to drive. I couldn’t wait to try one for myself.

Climbing through skinny doors and perched up higher than in any SUV, I’m instantly aware that the T is closer to a horse-drawn carriage than a modern car, except for the steering and seating arrangements. Although the three pedals and two wheel-mounted levers suggest conventionality, clearly we’re not in Kansas anymore, Toto.

Fully pressed, the left pedal engages first gear, but only after the handbrake lever beside the driver is pushed forward beforehand. The wheel’s left-hand lever actuates the throttle, and the right one is spark control, which crucially needs ‘retarding’ to keep the engine from firing suddenly and breaking the crank-handle operator’s arm while starting it! The right pedal is what passes for a brake, while the middle pedal operates reverse.

Confusing? The T demands total concentration, precision, muscle and the ability to read road conditions. It takes years to master. By today’s standards, acceleration is grindingly slow, responses are crude, and the noises and smells are headache-inducing. But, even though the concrete-heavy steering is alarmingly nervous and body roll excessive at speed, the Ford’s comically skinny tyres somehow grip. That owner Geof had it drifting was awe-inspiring and terrifying! Top speed is under 75km/h.

Incredibly, the Ford is smoothest gliding over paddocks rather than bitumen, something Geof was keen to try again and again. Then the penny dropped. There were virtually no sealed roads as we know them back in the early part of the 20th Century. The T had to cope with everything the land threw at it. This car is actually happiest traversing furrowed land, soaking up bumps and smoothing out rough and ragged tracks in a way that even today seems incredibly effortless.

With just two people on board, the Tin Lizzie’s ride is certainly bouncy, but the Ford is in its element with another three or even four passengers, plus luggage. Or, as was the case after the Wall Street collapse of October 1929, piles of furniture and other people’s belongings as entire families fled poverty for a better life elsewhere.

This was the right car at the right place at the right time. Before the Model T, you’d need a horse and carriage or take a boat or steam train.

Yes, it is unfathomably difficult to drive (especially on gravel or in extreme weather), but after hours of driving it around the track, the T becomes an addictive experience. No wonder people fell in love with this car. The sheer exertion demanded from it is rewarded with personal transportation.

The paradox of the Model T is that Henry resisted updating his masterpiece while the world he helped change kept moving forward, ensuring his masterpiece’s eventual obsolescence.
Like the old films I love watching again and again, I yearn to drive another T. There are, after all, nine official bodystyles to choose from. But in all honesty I was never more relieved than to travel back to the future just two days later in a Tesla Model S.

GEOF Baulch’s great-grandfather purchased this 1924 Touring three-door six-seater convertible from Wade Motors of Hamilton in western Victoria for £500 (about $38,000 in today’s money).

It had only travelled 16,000km before being waylaid for a 1932 Ford Model B prior to World War II. Geof’s father rescued the complete though rusty T from a shed in 1968, but it remained unrestored due to his declining health.

“It just makes people happy, no matter where you are,” he said, adding that many older Aussies rejoice at seeing the T, many having ridden in them as children.

Though this Tourer’s chassis was imported from Canada, Melbourne Body Works most likely built it a year before Ford finally commenced Australian production in Geelong in 1925. 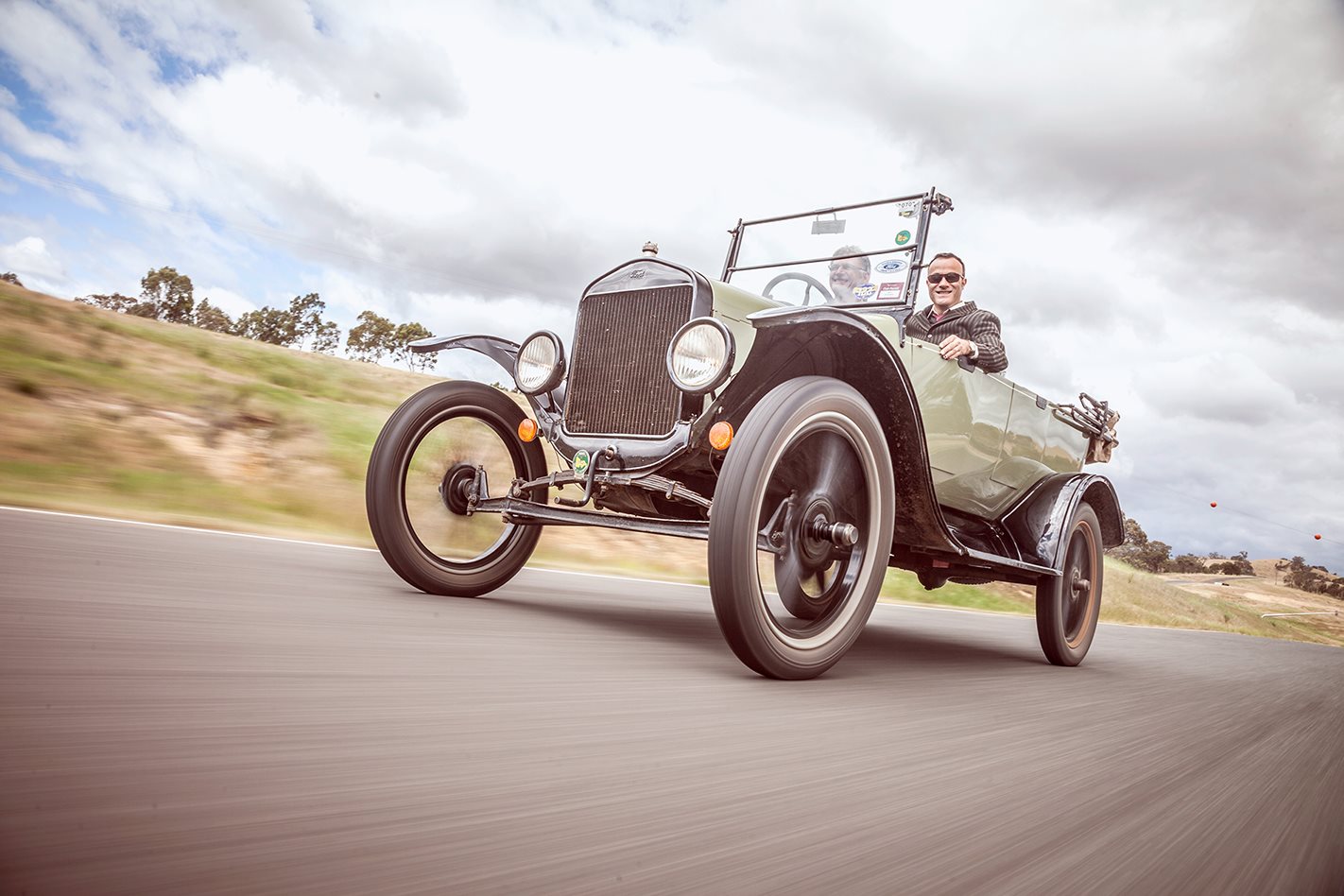 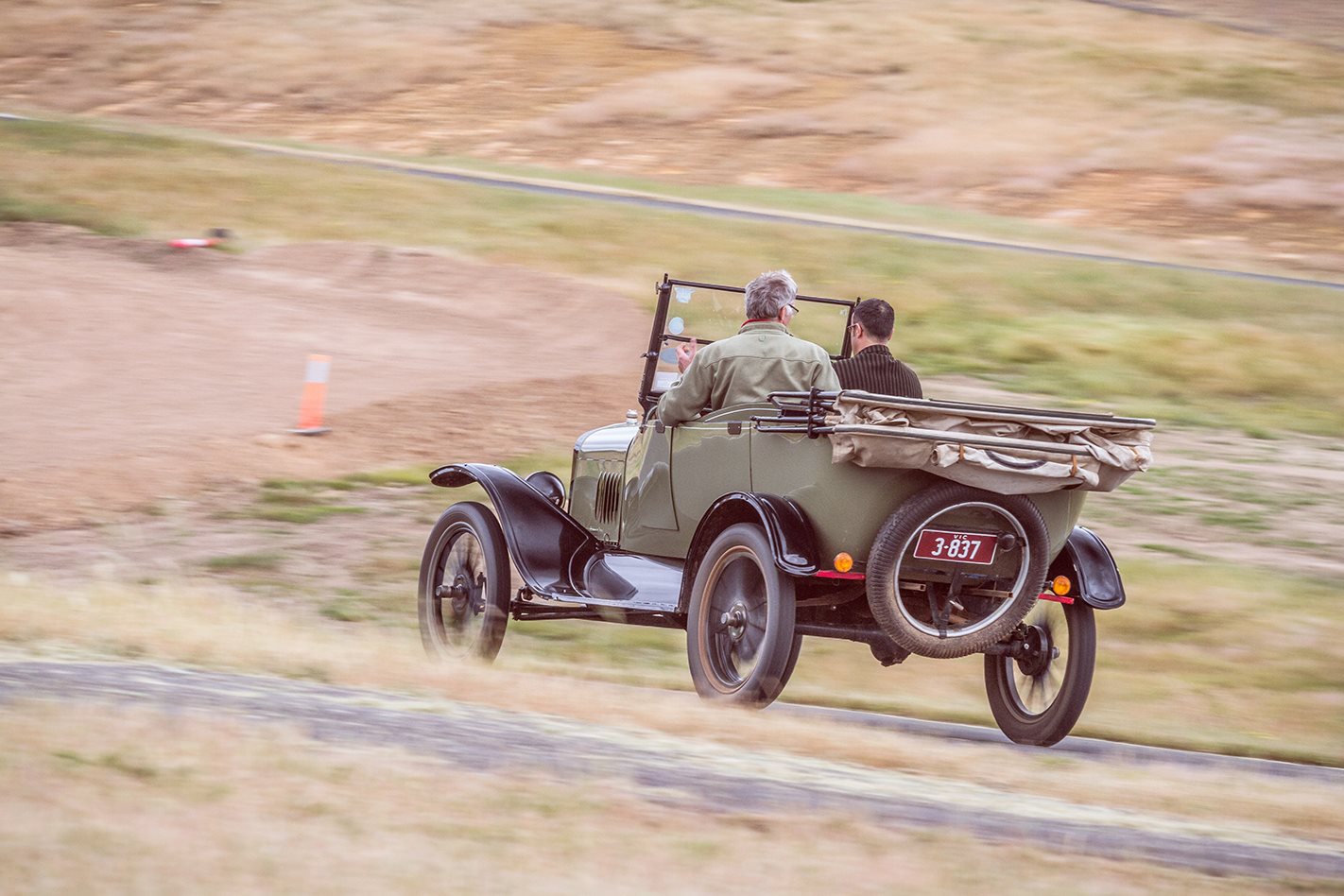 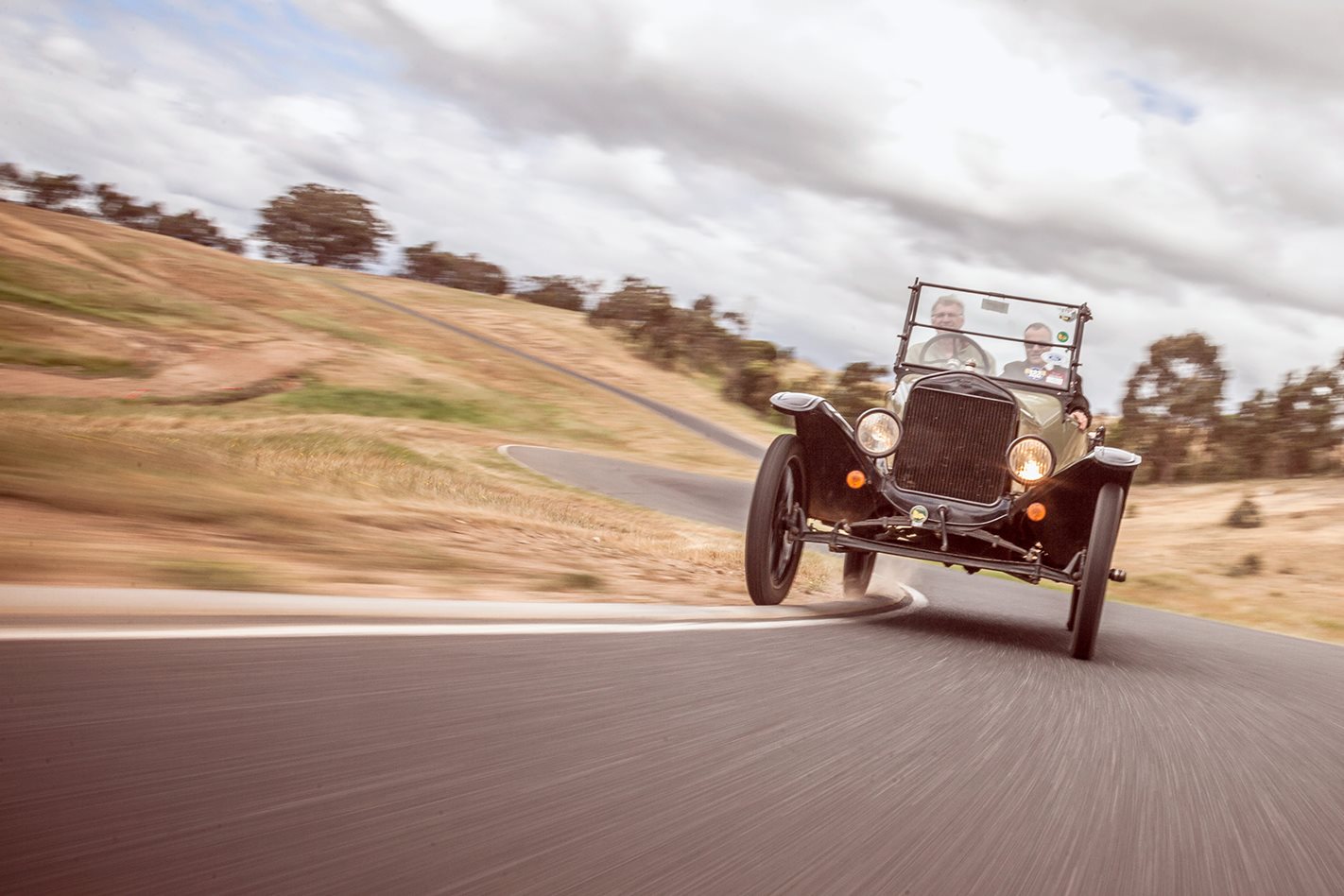 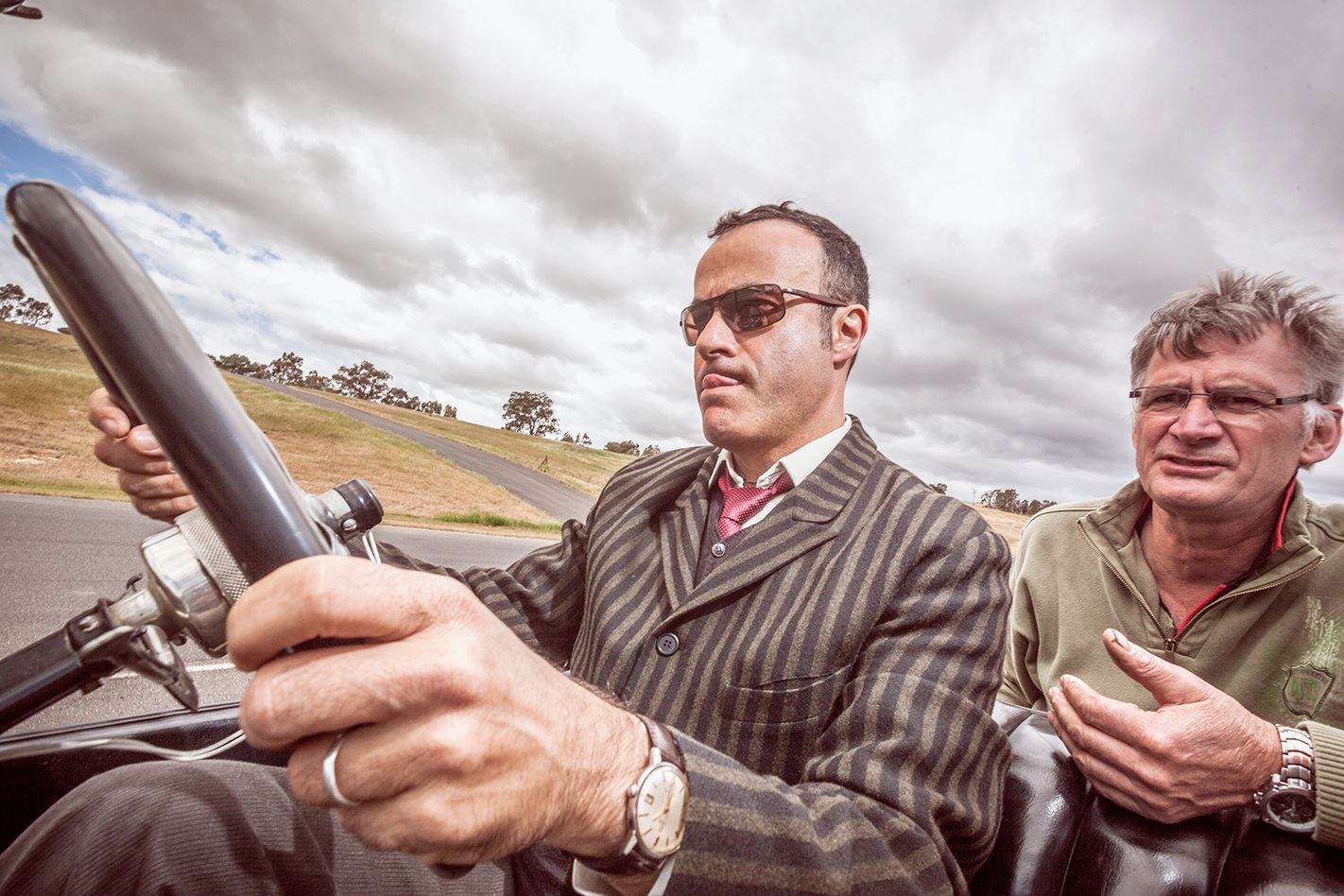 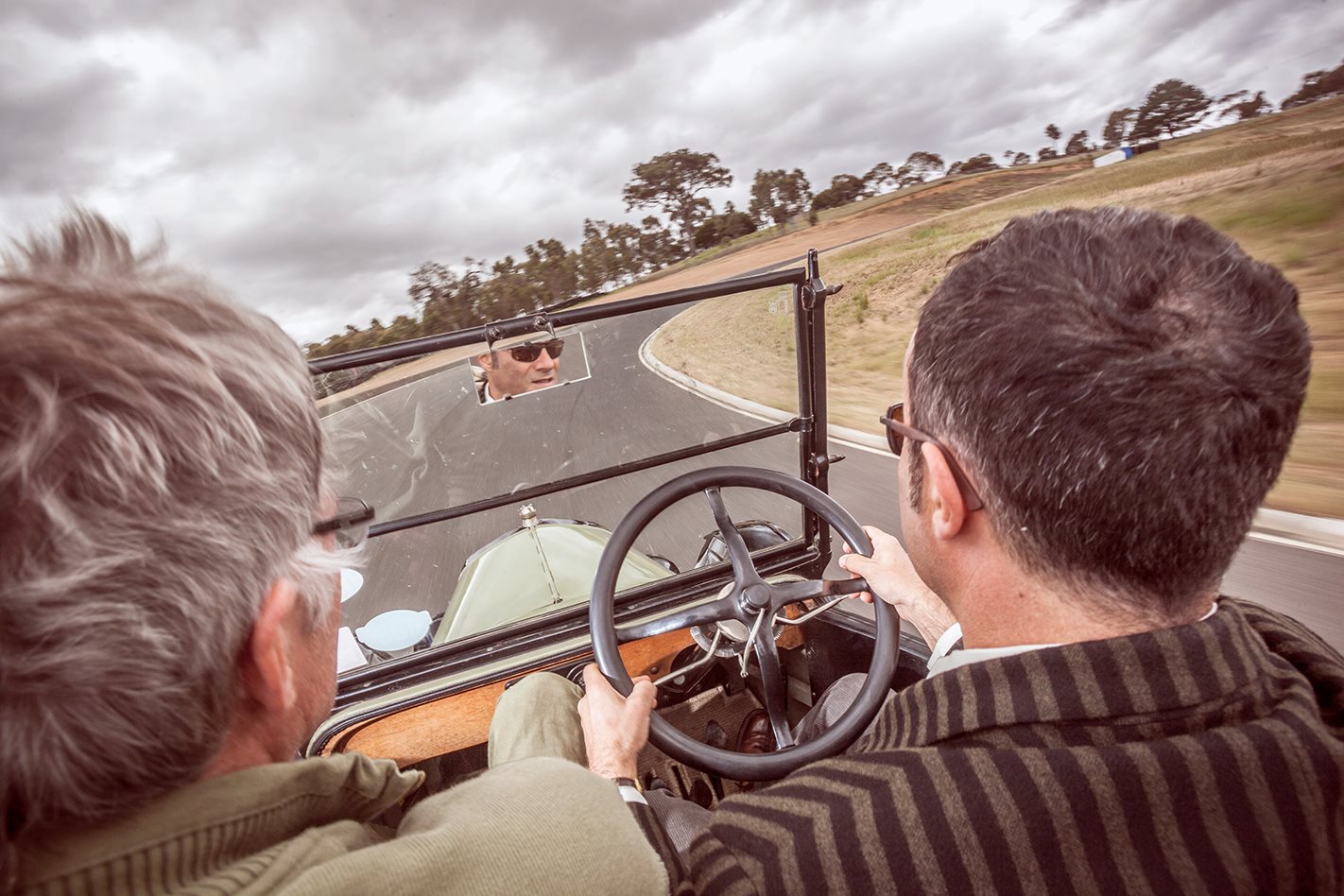 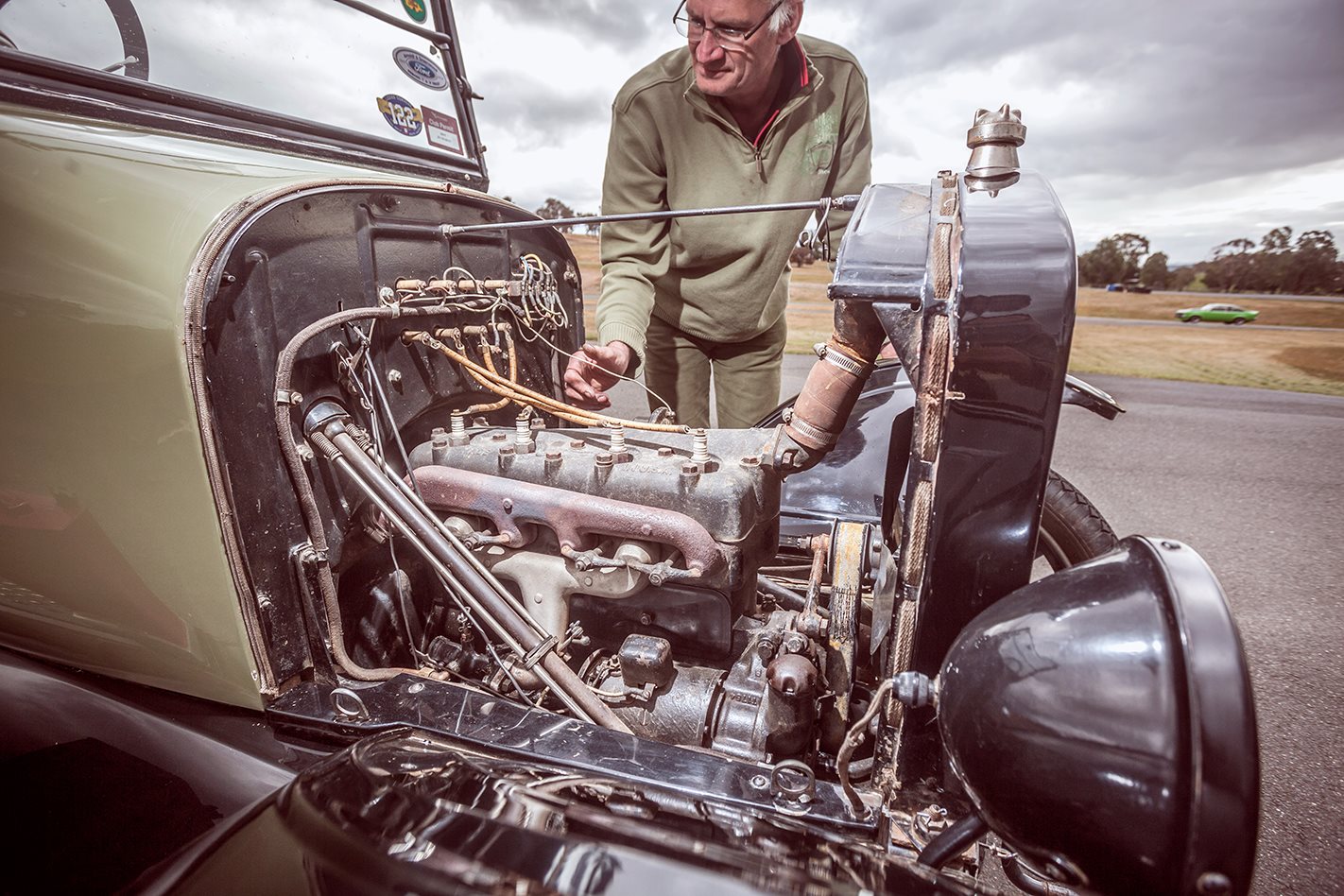