There's a little race car in every Honda.

First published in the January 1999 issue of Wheels Magazine, Australia’s most experienced and most trusted car magazine since 1953.

But while its 1.5-litre RA272 may have been the most innovative grand prix car of the post-war era, and Honda engines may have powered an impressive number of grand prix and CART championship-winning cars, its sports car history book is mighty slim.

Unless you care to slip to the supercar ranks for the mid-engine NSX, or warp the definition of sports car to include the Del Sol and Beat, that's been about it for Honda sports cars. Until now. Thirty-two years after the launch of the S500, Honda played its sports-car hand again at the 1995 Tokyo show, unveiling its five-cylinder front mid-engine SSM (Sports car Study Model) concept vehicle. Across the aisle from the SSM was the Argento Vivo, which featured the styling of Pininfarina, Honda's long-time styling consultant- on the same basic sports car chassis. It was an open secret then that one of these two – probably the SSM - was the basis for an upcoming production car.

The S2000 says a great deal about Honda after a half-century - great engineering and an amazing engine wrapped up in average styling. The production version of the sports car is quite similar to the 1995 SSM, its nose thankfully bobbed a bit. Seen from a rear three-quarter, it's a pleasant enough design with nice details, such as the rear central stoplight, which doubles as the trailing edge spoiler.

The view along the side of the slight wedge shape is also okay, but its plainness lacks the passion of the flanks of the Porsche Boxster, BMW Z3, Mercedes-Benz SLK, or Audi TT. While the headlights and the flaring over the front wheels are rather nice, the front is dominated by a huge, yawning air intake. Boring. What's missing is the excitement and tickle-your-heart design of the Boxster, SLK, or TT. The first three make statements about their maker's past, while the latter beautifully establishes such a position today. The front of the Honda only seems to say, "Here's exactly how many square inches of intake we needed to cool the engine". Even the BMW Z3 is at least damned interesting to look at.

Bland as the styling may be, it is the only thing about the S2000 that disappoints. Not unexpectedly, the Honda's size slots it right in with the competition. The S2000 shares a 2400mm wheelbase with Mercedes-Benz' SLK, Porsche's Boxster taping 15mm longer, and BMW's Z3 another 30mm longer. At 4115mm, the Honda's overall length is 115 more than the Mercedes, 90 beyond the BMW, and 205 less than the Porsche. The Honda's 1750mm width is within 30mm of the others, while its 1285mm height puts it no more than 15mm away. Not surprisingly, the S2000 weighs less than the others at 1250kg versus the Mercedes' 1375, the BMW's 1290 and the Porsche's 1280. Except for width, the S2000 is also within 10mm of the basic dimensions of the Audi TT. At the top of the S2000's 'best features' list is the engine. Honda has given the sports car a front mid-engine layout and a 50:50 weight distribution, something it could do in part because of a tiny jewel of an engine.

Nestled back against the firewall, its nose just aft of the front axle's shock towers, is a new Honda 2.0-litre twin-cam four that produces an impressive 89kW/litre. Comparing it with the three major European sports cars, the Boxster's 2.5-litre flat-six has 60.4kW/litre, the BMW twin-cam 2.8 produces 49.7kW/litre, and the supercharged 2.3-litre Mercedes four makes 60.1kW/litre. The Honda's torque measures 204Nm, the Porsche's is 245Nm, the BMW's 275Nm, and the Mercedes' 271Nm. Starting with an aluminium engine block shorter than a Civic's four, Honda engineers designed a lightweight engine that has a reworked aluminium VTEC head with twin chain-driven camshafts, their dual-cam profile system applied to both the intake and exhaust sides. With other features like direct ignition coils, straight-port intakes for the electronic fuel injection and metal catalysts, they have engineered a powerful engine that not only has a 9000rpm redline, but one that loves to rev to the limit - in fact it seems to hate to stop.

Honda's Myoshi test track has a little wooded section where you can slide out of a right bander and nail the throttle right up to the following 180° turn. In the Boxster and Z3, with their lower-redline engines, you must quickly shift up and then back down a gear or float for a bit in 3rd between turns. Not with the S2000's 2.0, which loves to have you keep your foot in it and take the four right up to nine grand before braking. What fun, and the engine runs so cleanly it has earned a Low Emissions Vehicle rating in the US and meets the EU2000 standards. But you had better enjoy the revving, because you need to use it to get that power. The Honda four develops its peak horsepower and torque roughly 2500-3000rpm higher than do the BMW, Mercedes, and Porsche engines, so you'll be shifting and working at it more than in the others. Honda makes that easy with a new six-speed manual transmission which features low inertia in the flywheel and gears. Shifts are short and direct throws via rods. Like the Mazda MX-5, the shifting movements remind you of a Formula Ford and, when you're using that horsepower, you can quickly get to the next gear without losing revs.

Aft of the gearbox is a torque sensing limited-slip differential. The Honda's 'high X-bone' frame features a rather tall centre tunnel that also contains the driveshaft, parallel sections fore and aft and strong outrigger sills. Both suspensions have upper and lower A-arms made so compact Honda refers to them as 'in-wheel'. Brakes are vented discs front, with solids in back - with ABS, naturally. The tyres measure 205/55VR16 fore and 225/50VR16 aft, a size combination it shares with the Boxster and SLK.

The compact steering system uses an electric power-assist. Underlining the 'driver's car' aspect of the S2000 is an interior that gives the passenger nothing but a window lift switch and stereo controls - the latter hidden behind the flip-up panel at the front of the centre console. If, of course, the passenger isn't enjoying the ride, there's always the centre emergency brake to yank on. The driver has it all, with the controls, including supplementary buttons for the sound system, neatly placed and easy to manage on little panels at each side of the steering wheel, on stalks or as steering wheel mounted buttons. This is a nicely laid-out design that reminds you of early- or late-day solo drives down your favourite road.

One nice little touch is how you turn on the car with the key but fire it up by pushing a big red 'engine start' button on the left panel. The seats are attractive, comfortable, and won't toss your backside (or your cookies) around even at speed on a racetrack. There are two large storage bins between the seatbacks. The top is kept simple and quick. The header latches are manual and of the same smooth over-centre type used on the Mazda MX-5, so the driver can reach up and over to operate them. Unlike the MX-5, however, Honda uses a motor to raise or lower the ragtop, needing a mere six seconds. The advantage is that while you can lower the MX5's top by dropping it back over your shoulder, you could also dislocate that same joint trying to reach back and raise it in a hurry - something that won't happen with the Honda. When it's down, the top can be covered by a semi-soft tonneau cover.

It would be good to be able to describe just how the Honda works when driven hard, but that is not possible at this stage. At the Wheels' test drive, Honda provided what they said were the only three finished prototypes in the world, one of which a journalist had the misfortune to soon put in the bushes. Then there were two, which handled rather differently. One understeered relentlessly, the other snapped into oversteer. While the latter would be ideal for those who still bemoan the taming of Porsche's 911, it was really a bit much for the average driver on normal roads.

All this left us a bit in the dark. We can only hope production versions are better sorted. They'll have to be. We do know the car's electric-assist steering is delightfully smooth and direct, and the brakes will repeatedly bring you down from speed with no apparent fade or fussiness. 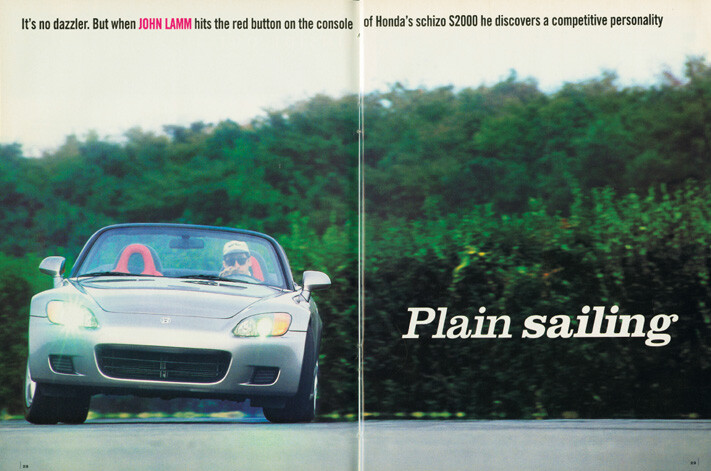 Honda had a Boxster and Z3 on hand for comparison driving. After the S2000, the Porsche felt almost soft and too well tamed when driven mildly, though it comes into its own as the speed rises. The BMW Z3 seemed slightly and not badly vintage, particularly with the space you turn off on-centre before its renowned steering comes into play.

Compared with this pair, the Honda seemed almost tense - not nervous but certainly more up on its toes than the other two. Just as delightful as the S2000's mighty engine is the car's price. In the US the S2000 will be around US$30,000-32,000, slotting it in with the base Z3 and the front-drive 134kW Audi TT coupe, and some US$10- 12,000 less than the base Boxster or SLK. Australians can expect to pay about $60,000 - about five grand less than the Z3 1.9 and seven grand more than the boring MGF. Quite a package for the price.