Mercedes' SL gets a facelift just in time for summer, but it's the entry-level car that gets the biggest changes

Mercedes' SL gets a facelift just in time for summer, but it's the entry-level car that gets the biggest changes.

WHAT IS IT
The SL400 is the new entry-level SL, Mercedes’ uber hardtop convertible that harps back to the legendary 300SL of 1955. Replacing the SL350, the 400 brings with it not only a new name but a new, more potent, more frugal V6 engine. It weighs less than the 350, is faster and uses less fuel. It doesn’t have any visual changes, so is part of an update rather than mid-life facelift.

WHY WE'RE TESTING IT
The SL400 is a whopping $83K cheaper than the V8-powered SL500, so it needs a convincing engine to be considered a player against the cheaper BMW 640i turbo six and the twin-turbo V8-powered 650i Convertible, which is only $18,800 more than the Benz six. Then there are sweet droptop sixes from the likes of Porsche to contend with, and for similar money Jaguar’s ageing XK V8 Convertible.

THE WHEELS VERDICT
The SL400’s name may not make sense, but the new V6 gives it a stronger set of legs – and they’re more flexible and efficient, too.

THE WHEELS REVIEW
STEP aside, SL350; there’s a new kid in town. Meet the Mercedes-Benz SL400, the new entry-level model for the oldest badge in Benz’s current line-up.

Regardless of the mysterious name, the SL400 will be the biggest seller, making up about half of all SLs sold here, so it’s crucial for Mercedes as an image builder and, at $229K, a cash cow. The smaller turbo engine is yet another example of downsizing to meet ever tightening CO2 emission laws in Europe and Stateside.

Behind the wheel, the SL400 is an event. Slip into the well-bolstered leather seats and you’re presented with a three-spoke wheel and low driving position. Visibility is good: there’s a large centre mirror, and you can almost see the curvature of the earth over that long, wide bonnet…

The cabin, which is unchanged, is well-crafted, with a short SL-embossed gear selector, and even with that metal roof on there’s a clever glass roof for an airy, light feel.

With the roof down – with a pathetic cut-out speed of 15km/h for opening and closing, it may as well be done at a standstill – the SL becomes a hoot to drive, its bassy idle swelling into strong Baritone howl. The note isn’t progressive; it gets louder, but doesn’t have so much depth. Nevertheless, it’s a sweet tune and not overbearing, punctuated with the occasional pop and subtle burble on throttle lift.

The new powerplant is super flexible. In Sport mode, the throttle loses the long travel of the Eco setting, reacting sharply and quickly. It’s a little lethargic in Eco, too, but Sport does exactly what it’s supposed to and the SL accelerates hard, feeling lithe and not anywhere near its 1655kg.

Rolling response is good, too, but not in the league of its V8 counterparts, while the seven-speed auto’s changes – which can be done via the wheel mounted paddles – are super smooth.

Balance is also superb. The seats hold you firmly as the SL400 rolls with its suspension on Comfort, but once at full lean it grips and goes.

The steering is responsive, but doesn’t tell you quite enough about precisely where the wide front 18-inch wheels are, and while roadholding is good, a little wet weather has the SL’s tail twitching out of corners; with it off, lairy powerslides are a breeze.

The word for the SL400 is smooth. It describes its looks, supple ride (even with the suspension in its firmest setting) and the silky V6. So smooth must be what 400 means. 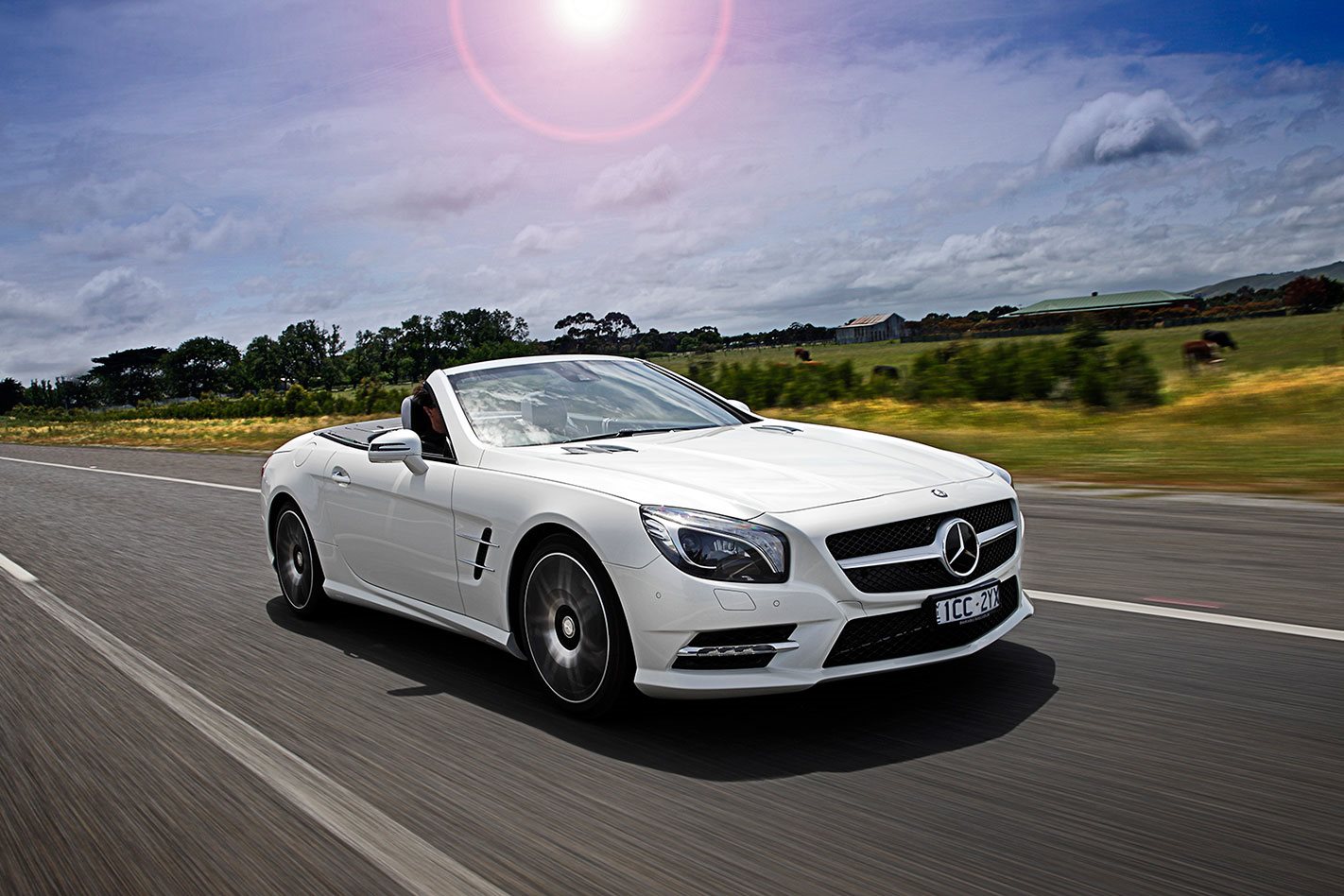 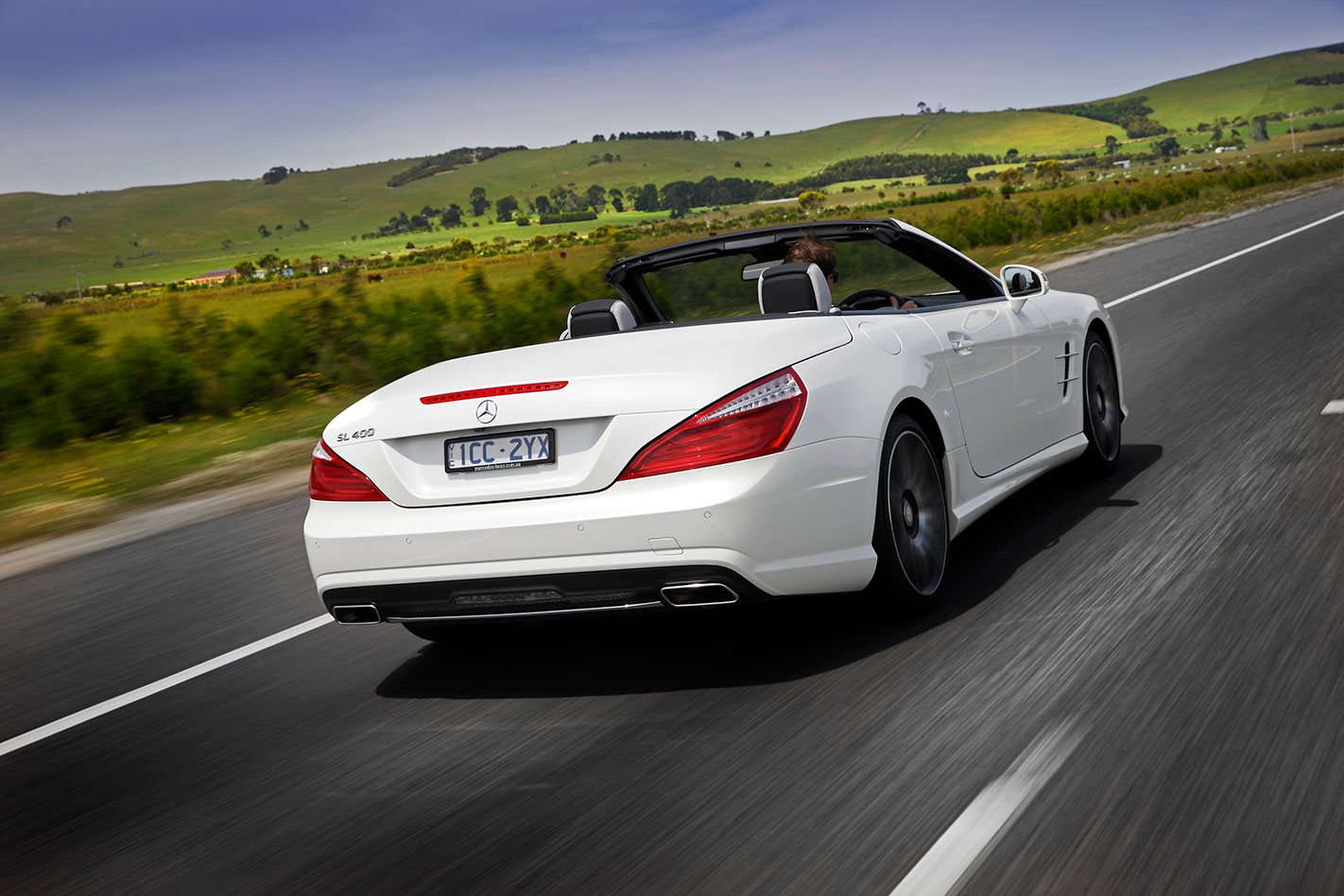 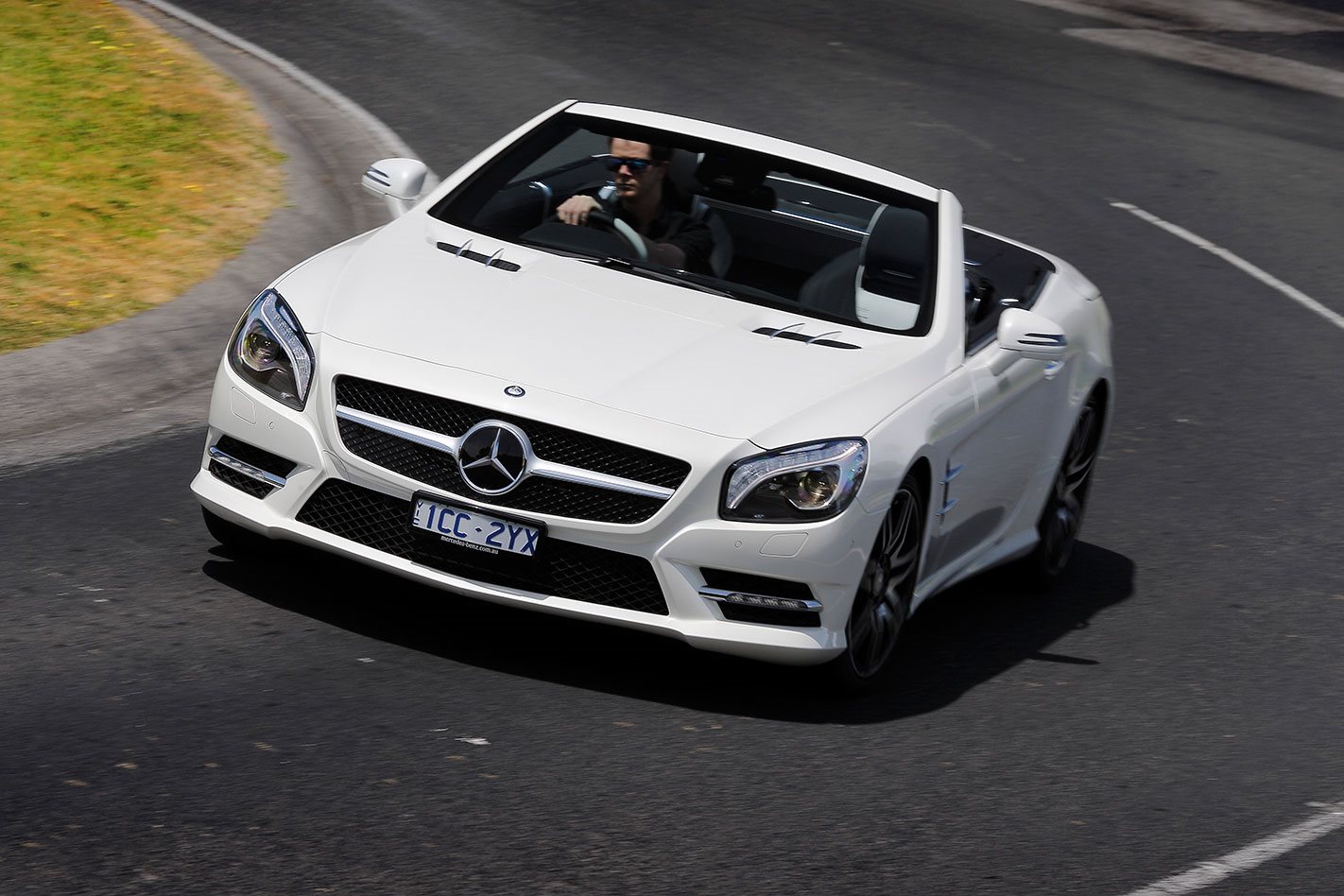 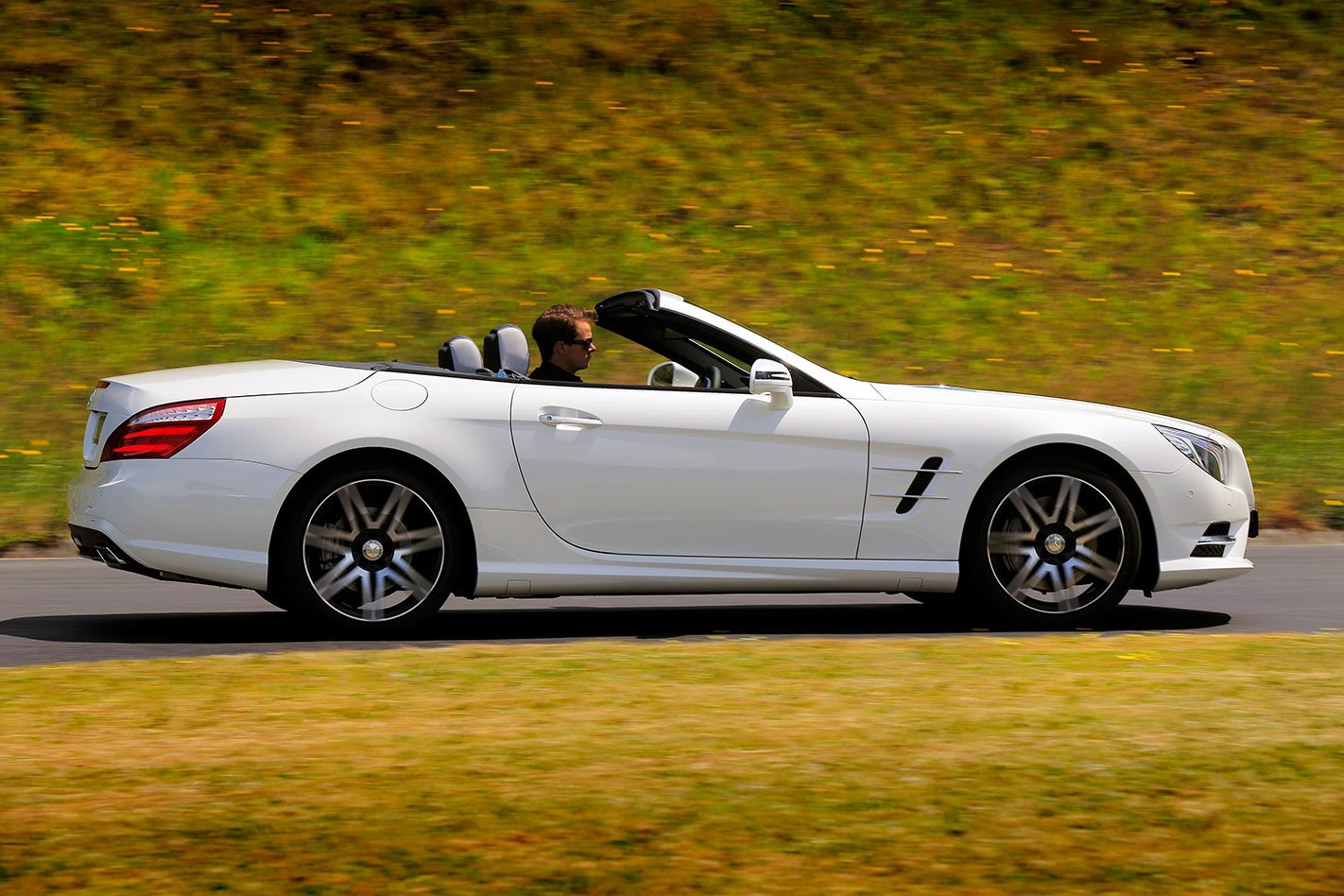 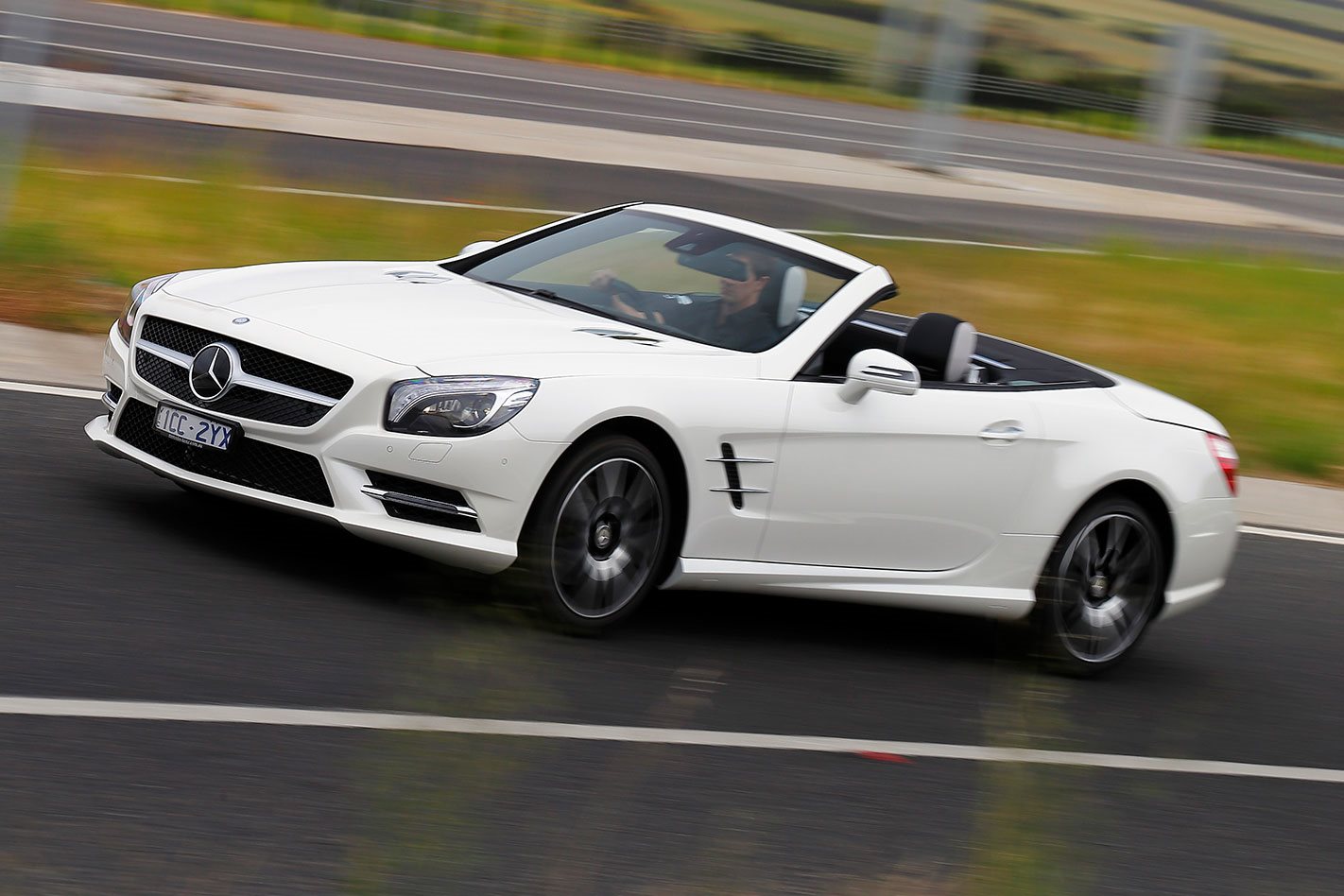 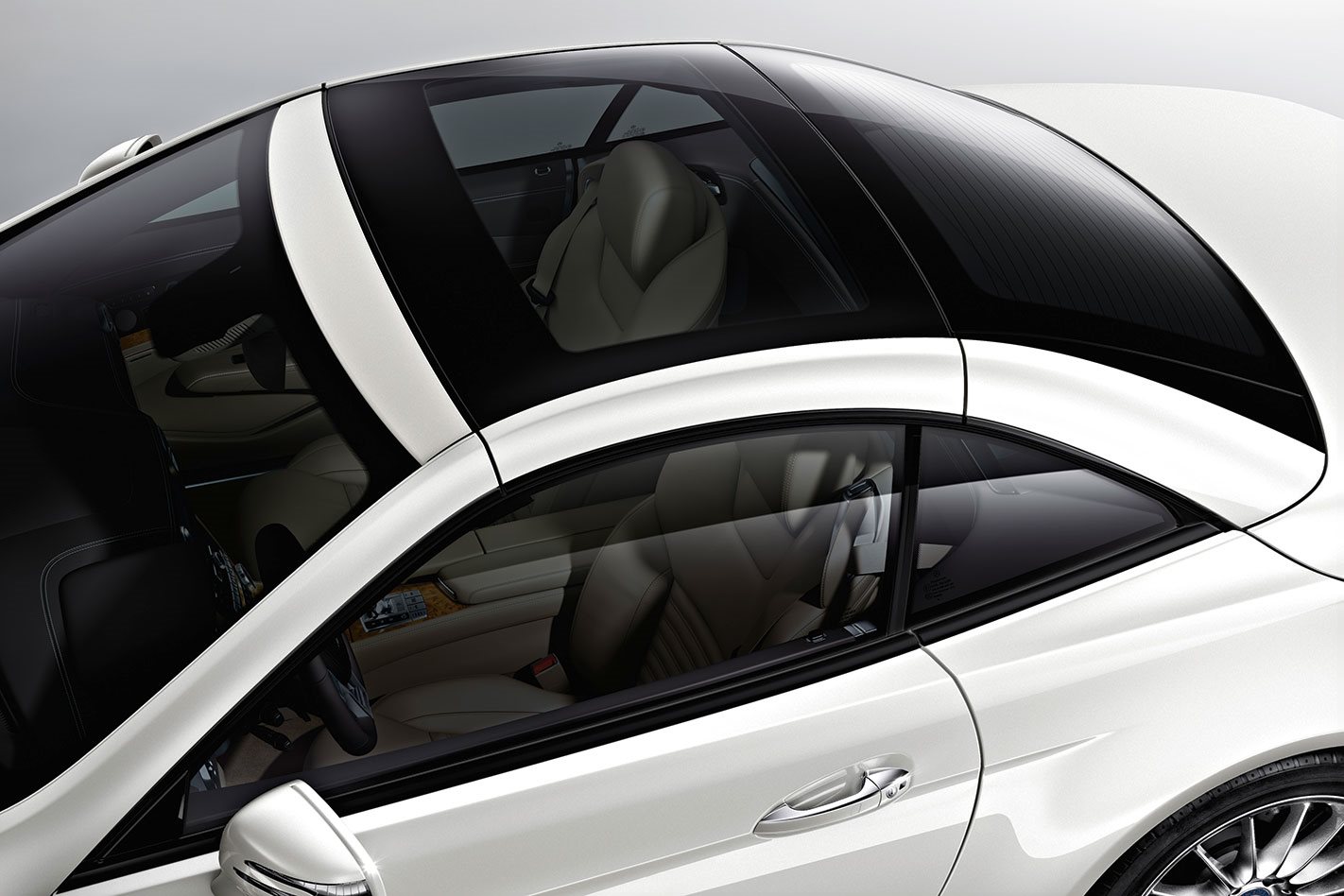