If you’ve answered Will Davison or Jonathon Webb, most recent winners of the Bathurst 1000, you’re talking about a piece of Johnny-come-lately tinware. The real Peter Brock Trophy dates back more than 40 years, and marks a similarly sizeable achievement in its field of motorsport.

It’s just that the motorsport is a lot smaller.

The Peter Brock Trophy is one of the golden gongs in Australian 1:24-scale slot car racing. The annual, stand-alone race, held in recent years at King Willy’s Raceway in Melbourne, has been fought over since 1974. In the first year, Brock personally presented the trophy at Melbourne’s Quikslot track.

The list of winners reads like a who’s who of the Open Group 7 category, in which the aero-bodied ‘wing cars’ reach actual speeds of 180km/h. Among the most successful is four-time winner and former full-time professional slot car racer Wayne Bramble.

“My father had told me stories about how Peter Brock used to come to the race and hand out the trophy,” Cody says. “The first time I went to Melbourne for the race, when I was 16, I could not do one lap on the track without crashing. Ever since then I was determined to win the trophy. I went every year, won a couple of the lower classes, but it took me 10 years to win Group 7, the Peter Brock Trophy race.” 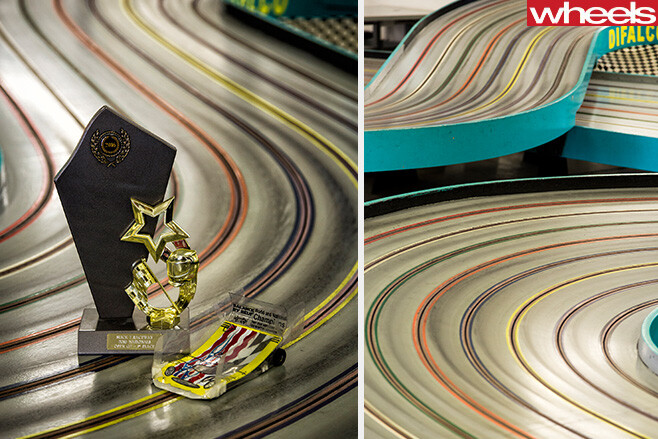 The Trophy – lately refurbished by Mobile Raceways – was decided in June over a weekend of qualifying, quarter-finals and semis, leading to the final: five-minutes on each of eight lanes, with four-minute service breaks between races.

“It’s a 155-foot [47.25m] track and the cars are doing two-second laps [averaging 85km/h],” Cody explains. “You’re lifting off the throttle four times a lap. It’s hard to win on that track because there’s always a lot of accidents, you’re constantly on the lookout for a pile-up or cars on your lane.”

Cody sure has the genes for it. “My dad started racing when he was nine. He’s 61 now. He’s raced all kinds of classes, he was the number one in wing cars here in the early 1980s, so he moved to the US to pit himself against the best in the world.”

Wayne ended up being a sponsored, professional slot car driver, travelling the US and the world for Camen Products. Twice national Group 7 champion (most recently in 2011), Wayne is also the only Australian driver to have won a World Championship (1989). “He was a pro driver from 1985 till about 2002, lived in the US for 30 years,” Cody says. “He was making real good coin, too.”

Cody, by day a truck driver for The Smith Family charity, got the slot car bug when he was eight, living in Michigan. “It was just a local race for 1:24 sedans – flexi-cars, as they’re called – and I ended up coming second. Been doing it ever since.

“Once my father backed off from his racing, that’s when I learned more about putting chassis together, building motors, airbrushing bodies, all that stuff. I enjoy all that more than the racing, really. But all the tracks we race on now, set-up isn’t as much a factor. It’s turning into a horsepower hobby.”