What does it take to extract every last bit of performance from the world’s ultimate race car? Nico Rosberg explains the art of F1 driving on the limit.

What does it take to extract every last bit of performance from the world’s ultimate race car? Nico Rosberg explains the art of F1 driving on the limit.

First published in the April 2013 issue of Wheels magazine, Australia’s most experienced and most trusted car magazine since 1953.

Some people talk about athletes exuding a presence, an aura, when they walk into a room. I’ve never bought that, but Nico Rosberg does have a fat-free, lean tautness that’s the physical hallmark of his trade as he enters the lobby of the Mercedes AMG F1 plant in Brackley, Northamptonshire, where we begin our chat before being ushered towards a waiting Mercedes-Benz S-Class.

It’s today’s interview location, taking us to the Mercedes engine facility in Brixworth, where Rosberg is needed for a TV feature. It’s 50 kilometres away. Far enough, I’m hoping, for him to tell me what it takes to make a Formula 1 car go as quickly as possible. To explain to me the techniques needed to get the best out of it. Not that you or I could do it, you understand – but in the way that a surgeon might explain the procedure he has just accomplished, I’m hoping to comprehend the theory. 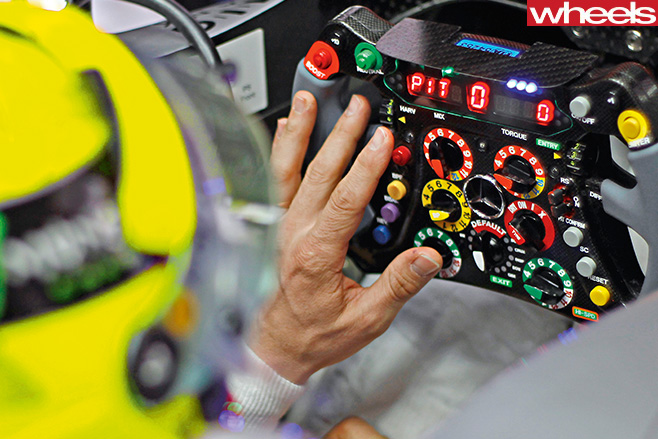 So, Nico, can you disseminate the skills you’ve learnt in a 17-year karting and single-seater career into less than an hour, please? I’m not sure he thinks he can, but he’s prepared to have a go.

I start by asking what the driving environment is like and what he can see from his F1 car’s cockpit. “You can see the top of the tyres,” he says. “You can see maybe 20 metres ahead, and nothing before that. But you don’t notice that because you’re travelling so fast.”

The HANS device doesn’t restrict your head movement at all, he says. “You can turn your head as much as you want to.

But there is quite a big blind spot because you can’t see a car until very late.”

The pedals are the same size, the brake unassisted and the throttle relatively heavy. The seating position is tight, narrow and leant backwards. The steering is direct and fast. “There’s 180 degrees [of lock] one way and the other way, more or less,” Rosberg says. “But you never use that, other than in Monaco. Usually, you’re using a little bit – up to 90 degrees both sides.” 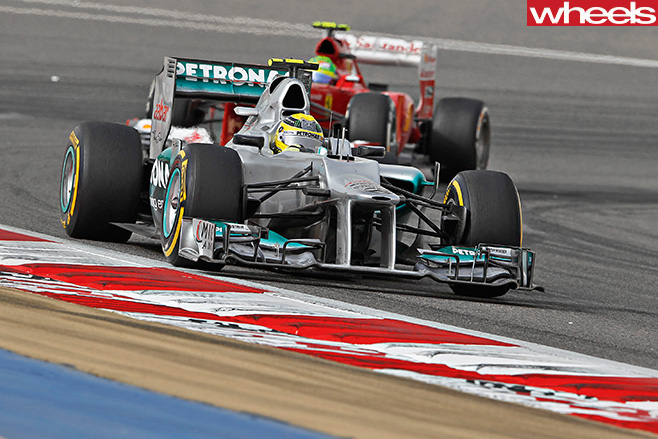 And the weight? “You can set it up as you want – you need to keep some heaviness to keep some feel to it, but it’s quite light in general. You need feedback through the steering wheel, because it’s very sensitive to when you’re locking up and turning. There’s more feel [than in a good road car] – loads more.”

So what about these corners, then? They’re the only things that separate one driver from another, aren’t they? A braking point, Rosberg says, is “literally a specific point. It can be markings on the road, bumps, the 100-metre boards, all sorts of things like that.” Unhelpfully, however, depending on fuel load and tyre wear, this point “changes all the time”. And particularly so given the sensitivity of last season’s tyres. Rosberg says that even at very high speeds it’s possible to lock the wheels under braking, which surprises me.

Nevertheless, he suggests that it’s best to hit the unassisted left pedal “very hard”. And while there’s a big weight transfer in an F1 car, unlike a road car, “It’s not in pitch movement, just in straight-ahead movement. You have to push against the steering wheel hard, otherwise you fall [down] into the seat.” 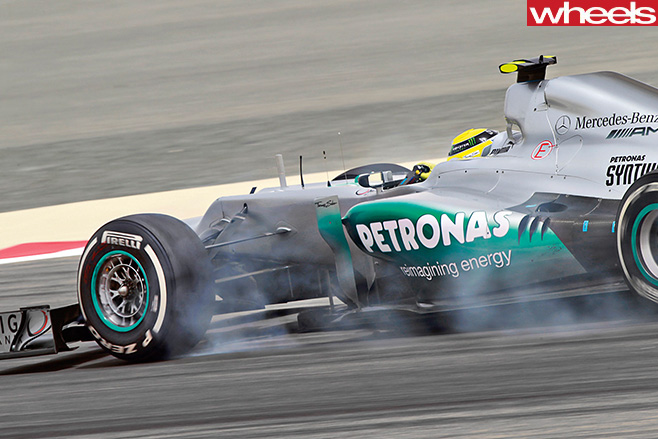 Braking, Rosberg explains, is where the big difference between race cars and road cars lies. “In the first part of braking, you hit it as hard as you can. There’s so much grip because there’s so much downforce.

But then, as you’re slowing down, the grip of the car is reducing at the same time. So you have to ease off the brakes to get maximum deceleration.”

Do F1 drivers trail the brakes into the corner, gradually easing them off even as they turn? “Yeah, a lot. All the way to the point where you go on to the throttle, you’re holding [the brakes] in,” Rosberg says.

But it’s those tyres again. “If you steer and brake, it’s a longitudinal deceleration and a lateral acceleration. It can easily overload the front tyres,” Rosberg says.

All being well, you’re on the way to the apex. “We accelerate at the apex, but you have to be very careful feeding in the throttle,” says Rosberg. “As soon as you feel the rear going, you have to wait again.” 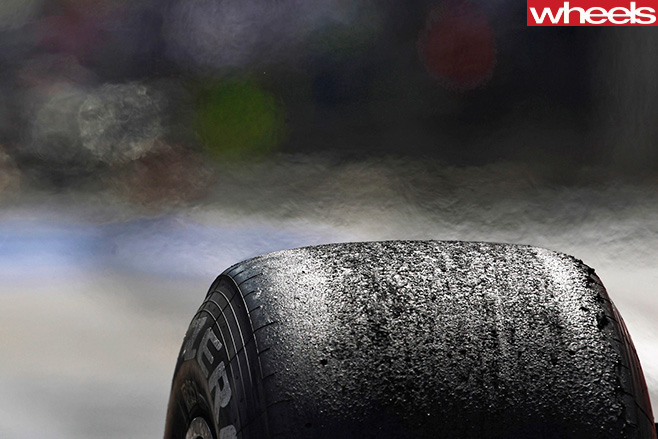 Is any lateral slip at all advantageous? “Yeah, yeah, of course,” he says. “You just need to find the right balance. There comes a point where you lose too much, so it’s finding the right amount.”

I wonder if that means a neutral steer point, where the steering wheel is straight and the car is effectively slipping across the track. It’s what I’ve been told is fast. “That is the fastest way to drive,” says Rosberg. “It’s like the rally guys: always driving on the rear. Because with understeer, you have to wait and wait and wait and wait until the car drives around the corner. Whereas with oversteer … it’s just the fastest way.”

And on top of that theory, “You always have little secrets everywhere, definitely,” says Rosberg. “And it’s very small things. Often one driver is finding it here, and the other is finding it there, and you look at the others and take bits and pieces and try it yourself. There’s many, many small pieces happening all the time.” 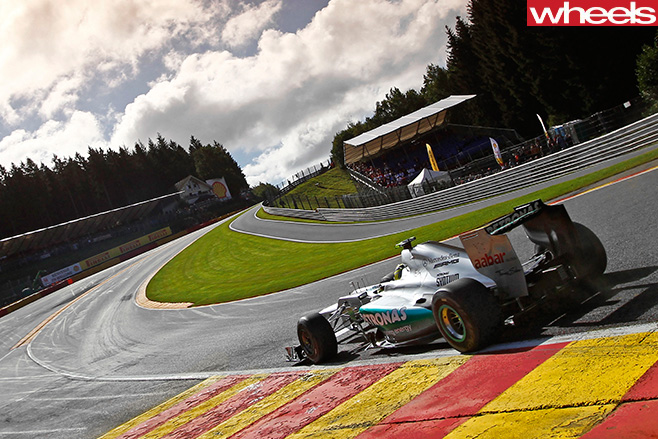 Which all sounds fine. If, that is, you’re driving to your preferred style, and drive as fast as you can. But, curiously, for drivers who will mostly have spent their careers taking part in races that last 20 minutes, perhaps half an hour or so, in F1 they’re usually not driving flat out.

The tyres are “very sensitive”, says Rosberg, particularly in their softest form. It added an intriguing unpredictability to lasts season’s racing. “You really have to drive so carefully; don’t put any aggressive steering inputs into it because you lose time straight away. That’s a very recent thing. It didn’t used to be like that. You used to be able to just push and drive fast.”

Which, I think, deals with the theory about as well as we’re going to during a conversation across the seats in an S-Class. So one more thing: it must be incredible fun. “Oh, yeah, for sure. It’s amazing!” says Rosberg. “Especially the qualifying lap, when you can go for all the limits. Because nowadays you can’t do the push, flat out [all the time], so it’s different.

“But for qualifying you can go flat out. And as Mario Andretti said, if it all feels under control, you’re not going fast enough.” 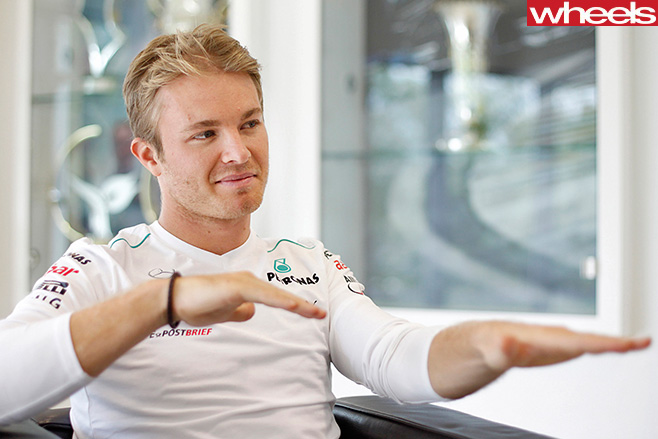 “We accelerate at the apex all the time,” says Nico. “You have to be careful feeding the throttle. And as soon as you feel the rear going, you have to wait again.”

Modern F1 tyres are very sensitive. “You have to drive so carefully,” says Nico. “Don’t put any aggressive steering inputs into it.”

“To be fast takes me quite a while,” admits Nico. “Right up until qualifying, because you’re adapting all the time, to a new car, to new lines, and you’re analysing how you can do better. It’s a process that continues.”

Under braking there’s a big forward weight transfer. “You have to push the steering wheel very hard,” says Nico. “Otherwise you fall down into the seat.”

Rosberg says the braking points for his F1 Mercedes change all the time. “It’s like every lap in this racing car is different. No two laps are the same.”

Engines spin right up to 18,000rpm. There’s no rev counter, only shift lights, and a bewildering array of additional switchgear.

The new tyres wear quickly. Nico says it makes driving “like long-distance racing, where you have to take it easy and make no mistakes. It’s very, very difficult to get that right.”

There’s no clutch pedal, just a lever on the steering wheel. Travel is only about 10mm and, says Nico, “there’s no feel”. No wonder Webber struggles.

It’s no easier to follow other cars closely than it used to be in F1. However, Nico believes that “much bigger speed differentials” between cars have made it look that way.

Tyre degradation means that drivers can only push really hard in qualifying. The race is all about managing wear.