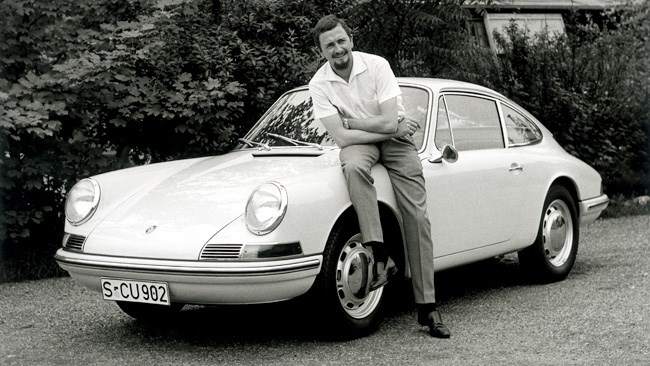 With the automotive world mourning the loss of Ferdinand Alexander ‘Butzi’ Porsche who passed away over the Easter weekend aged 76, we thought we’d nominate our ten favourite 911s from the last 49 years.

With the automotive world mourning the loss of Ferdinand Alexander ‘Butzi’ Porsche who passed away over the Easter weekend aged 76, we thought we’d nominate our ten favourite 911s from the last 49 years.

I admit a personal bias in that I have had the great pleasure of driving every car on the list. Notables that failed to make this cut, but could easily be justified for inclusion by others, include, but are not limited to, the 1974 RS 3.0, the 993 GT2, 996 GT2 and Turbo S, 997 GTS, Speedster and Sport Classic. As it stands, the list is made up of three 901 series cars, two G-Models, one 964, two 993s and two 997s. Not a single 996 makes the cuts, nor have I included anything from the recently released 991 range. I remain impressed by the 991 Carrera and Carrera S but suspect that the great 991s are yet to come. Perhaps there’ll be a Butzi special edition.

In an attempt to lessen the arguments, the list is not presented in order of importance but is a simple chronology of great 911s. Discuss.

Chevrolet beat Porsche’s 911 to market by three years with its rear-engined, flat-six powered Corvair, and when GM added a turbocharger in 1962, it was 13 years ahead of the 911 Turbo (and only the second turbocharged production car after the Oldsmobile Jetfire Turbo). Like the early 911s, the Corvair suffered wild lift-off oversteer and became the poster child of Ralph Nader’s book Unsafe at Any Speed. The Corvair was dead by 1969 under a cloud of lawsuits. But while Porsche could have easily killed off the 911 for similar reason, instead, its engineers, including Butzi Porsche, tamed the 911 and started it on a path that has delivered some of the greatest cars ever built. With just 97kW from its 1991cc flat-six, the 1963 2.0 is hardly the most desirable 911 on paper. But as Butzi’s baby and as the first in a lineage that has spawned some of the most desirable cars it would be churlish not to include the delicate little 2.0.

Michael Delaney (played by Steve McQueen) might not have much to say at the beginning of Le Mans (there’s no dialogue for 30 minutes), but his 911 S plays a starring role. The car in the film was McQueen’s own, shipped from California to France for the filming, but was sold only a few years later because McQueen already owned another 911 S. It sold again in 2011 for $1.375 million, making it the most expensive 911 ever sold at auction. Aside from very rare cars like the 911 R and ST, the 911 S was the first model to show the performance potential of this new sports car. The 2.2-litre engine (later 2.4) produced up to 142kW in some markets, a huge 48 per cent increase over the 2.0. When Porsche launched the new 991 to the international press in Santa Barbara in November last year, a Viper green 911 S sat on display outside the hotel. It’s owner? Jerry Seinfeld.

Not the first RS (that’d be the 550 RS), nor Porsche’s first use of the Carrera name (it appeared on the 356), but the first 911 to use either suffix. And while we’re dispelling myths, the car’s name is often wrongly shortened to 73 RS. But the majority of the 1508 2.7 RS Carreras were built in 1972, not 1973. All of which is quickly forgotten when you fire up that raspy 156kW, 2.7-litre flat-six. Today’s Turbo models will hit 100km/h in half the 6.0-seconds required by the 2.7 RS, but even now, this first 911 RS feels fast. The immediacy of the throttle response helps, as do the tiny dimensions, genuine lightweight and rorty soundtrack. But like most 911s, the 2.7 isn’t really about numbers. It’s about feel and every control surface, even the clutch pedal, tingles with feedback. The steering is heavy but manageable and drenched in information about road surface, steering angle and front end grip. The legendary status bestowed upon the 2.7 RS is well deserved.

Unveiled at the 1973 Paris motor show as the first oil crisis was biting, many Porsche executives didn’t see a bright future for a more expensive, high-performance 911. Little did they know the Turbo would become a staple of the 911 range and one of the most profitable cars in the company’s history. The original 3.0-litre 930 offered big-time turbo-lag, something made more obvious by the very long gearing of the four-speed manual. But when the boost arrived, there was no doubting the claimed 191kW output.

The silver 1973 show car was actually closer in look to the 2.8 RSR and the engine was nothing more than a wooden mock-up. The car was later purchased by Australian Porsche importer Alan Hamilton, who had the factory convert it to RSR-spec.

Many Porsche fans claim that the marque never made a G-Model RS, forgetting the ultra-limited edition RS SC of 1984 – even Porsche’s own press release for the 1990 964 RS (below) suggested there had not been an RS model since the 3.0 RS from 1974. Most of the 20 RS SC 911s built were used in rallying and very few made it onto the road. Instead, Porsche built the Clubsport as a kind of make-good. Launched in September 1987, just 340 Carrera Clubsports were built (only 53 of which were right-hand drive). Known as option code M637, the Clubsport featured a blueprinted 3.2-litre engine with 160kW and at 1179kg was 50kg lighter than a standard Carrera. On the launch of the 991 in the US, journalists were invited to drive previous generation 911s brought over from the museum in Stuttgart. The line-up included a 964 C4, 993 C2, 997.1 C2S and, according to the PR boss, “one very special G-model”. It was the 1986 prototype for the Clubsport! I spent a fantastic hour in the striped velour driver’s seat, running the engine through to 6000rpm, flicking through the five-speed gearbox and leaning on the very high grip levels. One of the coolest cars I’ve driven.

The 964 is the forgotten 911. Built as a cheap refresh of the G-model before the 993 would close out the air-cooled chapter, the 964 is the shortest-lived of all 911 generations, built across just 4.5 years from 1988-1992. It was also on the market during a time of turbulent financial times and particular hardship at Porsche. But even among falling sales and financial distress, Porsche found the money to start the Carrera Cup and build a road car based off these race cars. With 190kW, the 964 RS produced just 10hp more than the Carrera 2, however, at 1230kg the RS was more than 10 per cent lighter than the C2. In a formula that is still used in today’s GT and RS models, the weight saving came courtesy of the removal of much of the luxury equipment and the use of lighter side glass and an alloy bonnet. On-paper performance wasn’t dramatically altered; the RS would accelerate to 100km/h in 5.4 seconds (0.3 seconds ahead of the C2) and top speed remained 255km/h. But the 40mm lower and stiffer suspension, along with the fitment of Turbo brakes, transformed the character and handling of the car. Then, as now, the RS felt as close to a race car as was legally possible. Very much an underrated classic Porsche.

After the understated and pebble-smooth 964 RS, there’s no missing the jutting and strutting 993 RS SC. Very much a racer for the road, the 993 dominated many national sports car championships with minimal mods from the showroom floor – something to consider if you’re looking to buy. The 3746cc engine made 221kW and at 1270kg, the RS SC was a neat 100kg under a Carrera 2 and 230kg under the all-wheel drive Turbo. As the centrally-mounted tacho closed in on 6000rpm (peak power arrived at 6500) the big boxer developed a hard-edge metallic snarl that became addictive.

Where’s the GT2, that widow maker with its wild wheel arches? Good question and I wouldn’t argue if you replaced something on this list with the air-cooled GT2. But not the 993 Turbo S. It is the last and the most of the air-cooled 911s. The twin turbo 3.6-litre flat-six in 993 Turbo S produced 336kW, matching the output of the 959 supercar from a decade earlier (though the 959 did it with a 2847cc twin turbo). Like the 959, the 993 Turbo ran a sophisticated introduced all-wheel drive system that matched go with grip, producing 100km/h in 4.2 seconds (about 0.2 slower than the 49kg lighter 959). Porsche claimed a 298km/h top speed but several magazines independently tested the 993 Turbo S to beyond 300km/h, making it the first 911 model and only the second Porsche road car after the 959 to hit 300km/h.

An odd choice? Not when Walter Rohrl tells you on the international launch of the 997.2 Turbo that it reminds him of the 959 supercar; a factory-modified version of which he has owned since new. Like the 959, which debuted water-cooling (for the cylinder heads, though the crankcase remained air-cooled), torque vectoring and tyre pressure monitoring for Porsche, the 997.2 Turbo (and Turbo S) is a technical tour de force. Yet like the 959, it remains a comfortable GT car and a genuine daily driver. On the launch in Portugal, journalists drove from the hotel to the Estoril Grand Prix circuit via fast and twisty back roads. By the time we arrived the temperature was already 35 degrees. We then pounded around the track for four hours by which time temps had reached 40 degrees. Then as a final torture test, we repeatedly performance tested the Turbos from 00-200km/h; hitting 100km/h in 2.9 seconds on the way. Not a single car overheated, dropped into limp home mode or suffered from brake fade. All journos drove back to the hotel in supreme, air-conditioned comfort. Then the cars did it all again for the next 11 days. Big respect.

Arguably the greatest naturally aspirated 911 ever built and the last Porsche to run a Hans Merger-designed flat-six, the RS 4.0 is, for many, the pinnacle of 911 development. For me, it is simple the greatest car I’ve driven in a back catalogue that includes the Porsche Carrera GT, Lexus LFA, every Ferrari, Lamborghini and Aston launched in the last decade and countless other great cars. The RS 4.0 takes the already sublime 3.8 RS and builds on it with more down force, lighter weight and the rose-jointed suspension from the GT2 RS. Oh, and an extra 200cc. That might not sound like much, but it transforms the already fast and powerful 3.8 into a genuine weapon, one with monster torque throughout the rev range and a searing top end rush beyond 8000rpm. On a quiet autobahn I smoothly and rapidly accelerated from 40-310km/h, without taking the six-speed manual gearbox out of top gear. It’s a legendary engine and legendary 911. 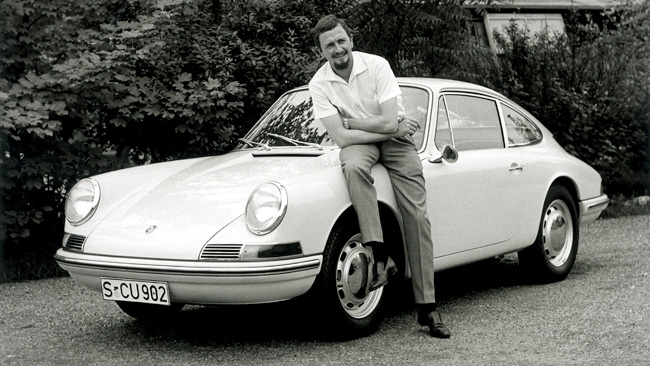 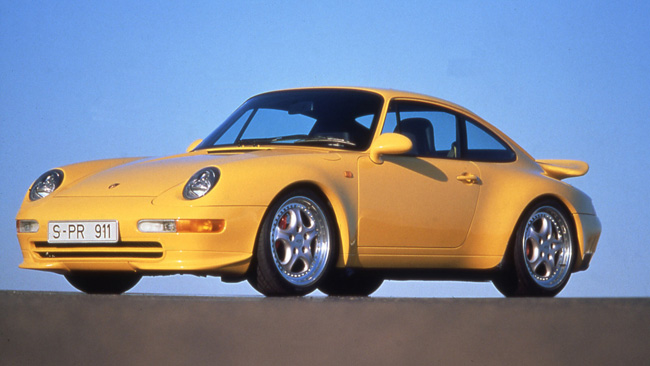 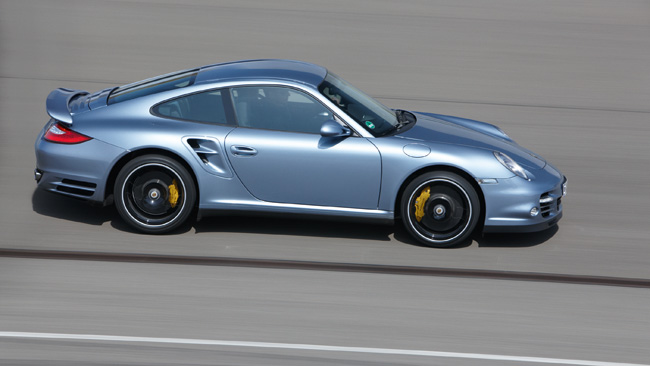