Wheels learns the tricks to mastering the Belgian monster.

Here at Wheels we’re lucky enough to have driven some of the world’s best race tracks. Nurburgring, Laguna Seca, Kyalami, the newly-opened Highlands Park in New Zealand and, of course, our own Mount Panorama.

But one that’s eluded us until now is Spa. Many Formula One drivers list it as their favourite track. And the fast Eau Rouge corners, in particular, are rated among the best and most challenging in F1.

Arriving at the track led to initial disorientation. Looking down a steep section I was trying to work out what part of the track it was. Turns out it’s the section alongside the pit exit, straight after the first corner hairpin. TV does not do it justice how steep the road is at that point.

My opening lap is a learning experience. This is a track that requires serious respect. Walls are close in some places and, other than the corners at either end of the start-finish straight, it’s super fast.

You get that impression the second you’re heading down that steep hill. It’s about heading towards the right of the track to set up for the biggest challenge on the 7.004km course: Eau Rouge.

The trick is to hug the right wall and tip in fast – flat if you’re brave – before straightening in the middle of the corner and punching the brake hard, using the rise in the track to force the nose into the bitumen and point it for the right-hander.

Exiting is just as tricky. It’s about aiming left for an apex you can’t see, and an apex that is almost 41m above the lowest point in the corner. Fortunately, the ripple strip is low and smooth, almost encouraging a healthy corner cut. 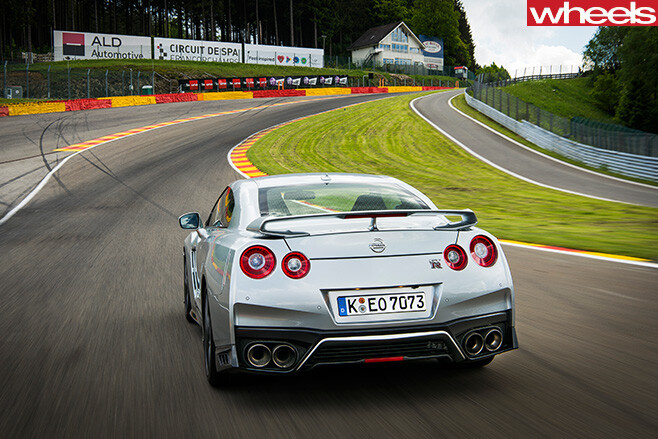 From there it’s the long Kemmel Straight, which rises slightly, limiting top speed a fraction on what you may expect having spent many seconds with the accelerator mashed to the firewall. At this point it pays to keep in mind that the F1 blokes have been flat out for two kilometres, from the La Source hairpin to the Les Combes curves.

Les Combes are fairly standard, and as with many other parts of the track there’s generous run-off.

From there, though, you’re heading down hill, first with the long, tightening Bruxelles right-hand bend then into the turn 11 left-hander.

Again, it’s steep down hill into the opening Pouhon left-hander. A double apex corner that can be taken with serious pace, it also requires patience so as not to run wide on to the strips of Astro-turf that define the edge of the track. Apparently they’re okay in the dry, but nasty in the wet; I’m happy to stay away from them.

Campus and Stavelot are indicative of a track that constantly challenges. Not particularly fast, but demanding of the correct line to ensure you don’t lose speed unnecessarily.

More fast stuff follows, and it’s into Blanchimont where many F1 passes have occurred. It’s super fast and sweeping requiring a dab of the brakes and correct track placement.

The chicane leading on to the straight is a brief pause to the high speed action and some time to dig deep for the next lap.

It’s a hugely satisfying track once you start to link it together and get some corners right. But it’s one that makes you appreciate the talent and commitment of the Formula One drivers. Having completed nine laps I promptly log on to YouTube to look at just how quickly they’re going, especially through Eau Rouge. I was in a Nissan GT-R and 160km/h required decent commitment. F1 cars hook in at almost double the pace.

As well as being one of the best corners to watch in F1, Eau Rouge highlights just how good F1 cars are at high speeds.