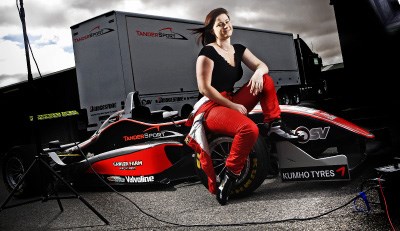 She has the speed, the determination, even the surname, so can Leanne Tander become the first woman to secure a seat in a V8 Supercar?

Maybe Leanne Tander should have stuck to gymnastics. If she had she might have won a few gold medals and been a household name by now. Or perhaps she should have gone for a glamour sport like swimming and tasted the chlorine highs of fist-pumping Olympic glory.

Imagine the perks. An inbox full of invitations to red-carpet openings, a wardrobe crammed with designer threads, endless cover shoots for insatiable women's magazines or even a plum job co-hosting a 20 Greatest TV show.

But no, Leanne Tander chose instead to get grease under her fingernails and race cars. And that's why she's driving a Kenworth semi-trailer in the wee small hours of the morning for a Formula 3 test in Adelaide. You can't get much less glamorous than that. Her most significant perk? A freebie HSV VXR.

Leanne Tander is the best female racing driver in Australia and the best since the likes of Christine Gibson and Sue Ransom, pioneering (and quick) women racers from the '70s and early '80s.

But you probably only recognise her name because she's Mrs Garth Tander and hubby is the 2007 V8 Supercar champion and 2000 Bathurst 1000 winner. And there's the rub: it's no easier now for a woman to make it in elite motorsport than it was back in Gibson and Ransom's day, despite noughties women being more 'empowered' than ever before. In fact, it's probably even harder.

"Some people reckon being female is easier; you stand out, it's easier to get media and sponsors," says Tander, who was a competitive gymnast for five years before taking up karting at age 13. "A lot of sponsors aren't interested because they don't see the value of a female [ambassador]. Then there's the issue of being taken seriously in a man's sport."

That's worth repeating: the problem of being taken seriously in a man's sport. For Tander that began when she started karting and beating boys. "I had to put up with a lot of crap," she says. "I got the usual stuff, mostly from boys' dads saying, 'I can't believe you let a girl beat you!' So the kid, who doesn't want to disappoint his dad, biffs you off in the next race. I had people telling me to my face that I should be doing ballet instead."

Sitting high in the 'Kenny' watching Mrs Tander wrestle its huge steering wheel, it's difficult to imagine her dancing a delicate pas de deux. She says she was never a "girly girl" and generally favours freckled freshness over mascara, although she can "glam-up". Small and power-packed, a legacy of those rigorous gymnastic years, she has a pretty face that makes her look younger than her 28 years. It also benignly masks her steely resolve to succeed.

The thing is, while V8 champion Craig Lowndes, for example, had Peter Brock for a mentor when he was a rookie, Tander has had no-one of her gender as a role model or racing coach.

"It's been hard work to get where I am and I've learnt a lot of lessons because there's been no-one to show me how to do it," she says, without a trace of bitterness. "I've probably gone one step forward, two steps back, and three steps sideways. The way Christine Gibson got her [touring car] drive was just so far removed from me. Today it's a profession; back then it was a hobby. No-one has really been able to give me advice, that's why I'm passionate about getting something going for other girls."

Her motorsport career began almost by accident. After chucking in her daily regime of balance beam, constant dieting, early nights and no social life, she had a turn in a go-kart for a giggle. Her sister had started racing one and Tander thought it looked like fun.

"I just wanted to turn up and race. The problem was I won a race (1994) but it wasn't against the best drivers and, as a competitive person, I wanted to challenge the best. To do that I had to start practicing and after that it became a passion to be the best."

In 1997, she became the youngest woman to race in Formula Ford, the traditional first feeder category to Formula One and now the main conduit to V8 Supercars. She was seventh in her second full season in 1998 and seventh in 1999. In 2000, she became the first woman to win a round of the Australian Formula Ford Championship and finished third in the series, another first for an Australian woman.

The photo of Tander atop the podium after her 2000 win is both triumphant and poignant. Alongside her are Luke Youlden - an underrated driver still trying to find a full-time niche in V8 Supercar - and Will Power, who went on to race in the US and was fourth in the 2007 Champ Car series before switching to the rival Indy Car open-wheel series last year.

Power is not the only driver racing at an elite level that Tander has beaten, but she doesn't waste energy on past glories. "It's really easy to obsess about the fact that you've beaten drivers who have gone on to bigger and better things," she says calmly.

"[But] it takes your focus away from what you're trying to achieve. Garth gets it all the time; people saying, 'Oh, I beat you in 19-whatever'. It takes more than just talent to get to the top, you also have to be in the right place at the right time and grab the right opportunities. I don't begrudge Will's success, it just makes me more determined to prove that I'm just as good."

Her Formula Ford success and subsequent notoriety won her a drive with V8 Supercar team Garry Rogers Motorsport in the V8 understudy Development Series in 2001. It was all happy families because Garth was racing for GRM in the main V8 game. She finished second in her first race, another podium first for a female driver in this country. Things looked promising.

But what was to be a three-year deal evaporated when GRM took on Holden's Monaro GT race program and Leanne was dropped after one year. And it hurt. It wasn't just the fact that she had lost her drive, it was also the realisation that her ascension to V8 Supercars was a little too premature.

"I wasn't ready," she shrugs. "I was a good enough driver but I'd only been racing for six years ... I didn't have the experience or the head on me to jump straight in and attack it the way I needed to. That's the difference between a 20-year-old boy and girl: males don't have any thoughts of crashing or looking stupid, they just go out and do it. I thought too much about what people would think if I did something silly and as a consequence I didn't do a good job. It made me a bit too timid."

Leanne did a second Development Series season, racing for the small West Australia-based Fleetcare Motorsport team but she barely troubled the lap scorers. "We spent all our budget preparing the car and didn't have money to test," she shrugs.

Garth engineered the car when he could and it was fast but with no development or testing Leanne was not as competitive as she had been and the car also suffered "a lot of gremlins and mechanicals".

"Every time we pushed the car out to race we never knew what it was going to do; it was the wrong way to do things but at the time it was the best we could do." The experience "shattered" Leanne's confidence. "I was almost ready to give up after that," she says.

She stepped back a few notches and raced her dad's RX-7 in the Improved Production category and a factory Toyota Corolla in the Australian Production Car Championship while she studied for her Bachelor of Commerce and got her mojo back. She won both the Victorian and NSW Improved Production titles in 2005 and was a late starter in that year's Australian Formula 3 series after her father, Mark, funded a drive in an outdated 2000 Dallara chassis. Tander and the nimble open-wheeler clicked.

Formula 3 cars are like mini F1s. Getting the most out of one means maximising downforce, braking as late as you dare (Tander is a demon braker) and carrying as much corner speed as possible. The little four-cylinder, wings 'n' slicks cars make around 160kW from 2.0 litres and weigh just 550kg. You need precision, brains, and bravery to drive them quickly and they reward the committed driver.

"F3 cars are so precise, they don't move around like a Supercar. When you first drive them it's hard to feel the difference in set-up changes," Tander explains. "They feel like they're on rails, but you have to be able to tell whether the tiniest changes have improved the car or not. It's easy to get within a second of the fastest guys but to find that second you have to figure out how to use the aero in the right corners and downforce under brakes and to really push because the car has so much grip."

In 2006, Tander finished fifth in her first full season and second in 2007. With good sponsorship for 2008, TanderSport bought a newer Dallara chassis and was runner-up in the championship again by just four points. One less 'mechanical' and she probably would have won.

But for a championship, Tander has gone as far as she can in F3 and a big, booming V8 Supercar beckons and this time, she reckons, she will have the racing maturity to succeed. "I learnt more in three years in Improved Production than in the entire time I'd been in Formula Ford and V8s. I learned how to tune and drive a car that wasn't perfect and how to race against cars with more power. Then I went into F3 and learnt even more about set-up and racing and I'm better than I've ever been as a driver; I'm ready to get back into a V8."

But the global economic downturn had all but scuttled her chances of securing funding to contest the 2009 V8 Development Series and as Wheels went to press TanderSport was preparing to run two young drivers in F3 in '09. "I'll continue to pick up drives wherever I can and maybe score an endurance drive but, if not, I'll just run our F3 program and work on next season," Tander says optimistically.
Bouncing along in the Kenny on the way back to Melbourne and now confirmed as her 'truck bitch' - evidently that's a term of truckie endearment - I can't help but pose the eternal motor racing question to Mrs Tander: are women as good as men, given equal equipment? She smiles, almost as if she's been waiting for it to come up and offers her opinion.

"Because girls don't have that all-out testosterone thing, a guy will get the most out of a car in five laps whereas a girl might take 50 laps to beat the guy," she says. "Males and females just have different ways of approaching things but women get better a little bit older than men."

Which means Leanne Tander has still got plenty of time left to become a household name. And she doesn't have to wear Speedos to do it. 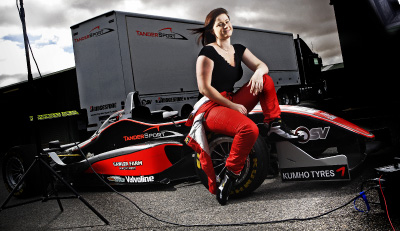 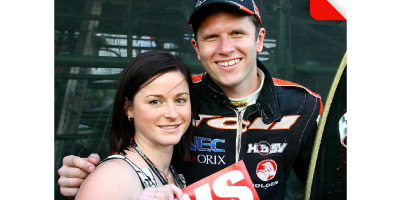 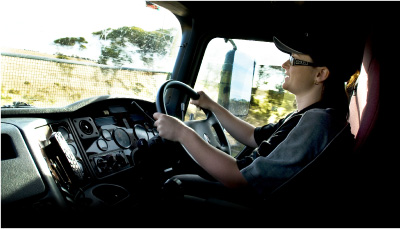 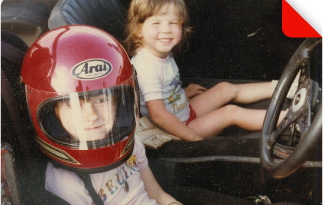