Seduced by the beyond-beautiful Citroen DS, an aerodynamic wonder already a decade old yet still utterly contemporary, my plan was simple: catch a bus to central Paris, find a DS taxi – and only a DS – for the ride to Le Grand Hotel. Ignoring the Peugeots and Renaults at the taxi rank, I waited intent on landing my first ride in Citroen’s elegant sedan. Finally, wallowing in the unmatched comfort of its vast rear seat, I knew it was the most comfortable car I’d experienced. Who said you should never meet your heroes?

A couple of days later I hired a Citroen Ami 6, the weirdly styled, rebodied 2CV. I wanted the sedan with its reverse-angle rear window – like a ’59 Ford Anglia – but they could only offer a wagon. On snow-covered roads, I drove to Le Mans to lap the famed road circuit – a thrill, even with a mere 602cc, 19kW and 105km/h top speed. My notebook tells me I “duelled with a girl in pigtails, also driving an Ami”, though I doubt she was aware of our contest. Less than two years later I tested a DS21 Pallas, writing: “The Citroen is a long distance runner, out front and alone.”

In 1971, three months into the editorship of Wheels, my enthusiasm for Citroen pushed the new GS to the cover. Sales bombed and a Citroen hasn’t appeared on the cover since. Fifteen years later, circumventing import restrictions, I bought one of the last new 2CV Speciales, and now I can’t believe I sold that most honest of all cars. Two Citroens – 2CV and SM – featured on my 2011 list of the 50 Greatest Cars Ever.

Citroen is one of my car Gods. Rumours of a secret Citroen bunker first surfaced about 15 years ago. It was located somewhere in the suburbs of Paris and contained a stash of historically important models, including once hush-hush prototypes. My enquiries were ignored; normally helpful Citroen people denied any knowledge of the collection.

Frustrated at not being able to breach the secrecy while living in Europe, I retired disillusioned, knowing one of the few genuine possibilities on my now-short automotive bucket list remained unfulfilled.

Not quite. At the Wheels’ COTY dinner in January,I mentioned the bunker to Citroen’s new press person. A few months later he asked if I’d like to see what’s called the Citroen Conservatoire. Retirement, I instantly decided, can be ignored if it means realising a dream.

Tucked off to one side of Citroen’s old Aulnay-sous-Bois plant, which closed in 2013, and close to the A1 autoroute heading north to Charles de Gaulle airport is a low, nondescript grey and mirrored-glass building surrounded by near empty carparks. One double-chevron logo adorns the awning of the entrance of a structure that was purpose-built to house nearly a century’s worth of Citroens, including several rare, one-of-a-kind models and an example of nearly every model the company has produced. 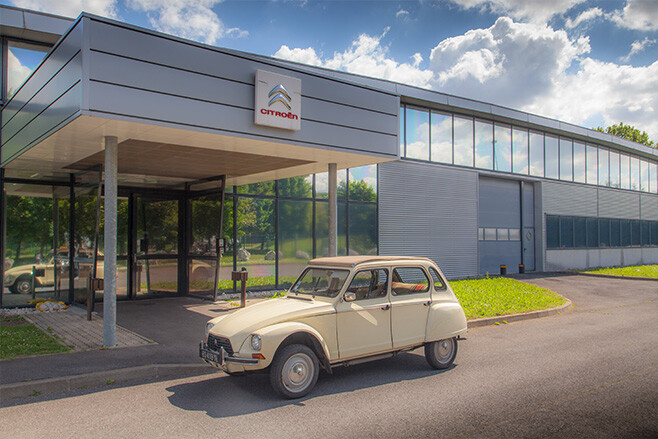 Before the museum’s inauguration in 2001, most of the cars, engines, documents and memorabilia were scattered throughout northern France in various PSA Peugeot-Citroen factories.

During the 1980s and ’90s, when Citroen’s creativity was minimal and it was building many boring cars under a PSA regime that deliberately set out to ignore Citroen’s history and dilute its reputation for avant garde designs, the company consciously turned its back on the quirky models from the past, including the Traction, 2CV and DS.

Fortunately for us, under a more enlightened management, Citroen has come through the denial period and now takes its rich history seriously.

Almost every piece of Citroen’s collection is now located in the Conservatoire, though not everything is on display. About 300 of the approximately 400 cars in the collection are on the floor at any given time and most are in excellent running condition and used on a regular basis. The others are on loan for classic car events and publicity campaigns. The archive section is located in separate rooms that boast almost two kilometres of shelf space and can now be accessed for research and to obtain detailed information on old Citroens.

At first the Conservatoire wasn’t open to the public, only Citroen car clubs. Today, ¤7 ($10) buys a 90-minute guided tour. Book with martine.darblade@citroen.com. You won’t regret it, I promise.

There’s no point comparing the Conservatoire to the glossy extravagance of the German carmaker museums; this one is slightly spartan, with no interactive displays or coloured lights and (wonderfully) no elevator music. So there is no distraction from the main focus: row upon row of cars in what is undoubtedly the world’s most complete collection of Citroens; a hanger-sized treasure crammed with cars that literally take your breath away. Mine anyway. 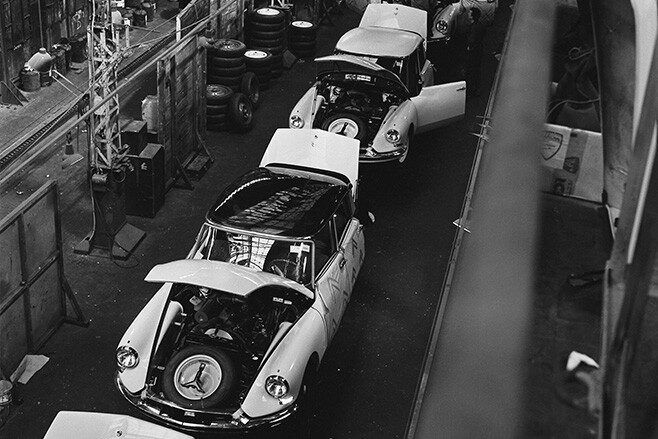 The collection includes the first car made by the eponymous Andre Citroen – a 1919 Type A – which he repurchased in 1925, knowing even then that it was worth retaining. Only from 1982 did Citroen adopt a formal policy of keeping the first or the last (or both) of any new production car, all concepts and crucial engineering prototypes, though at that time it was without a dedicated repository.

Most cars I knew, if even vaguely, but one gold mystery car confused me. Built in about 2000, it was only a foam mock-up based on the Xantia and lacked an engine and interior. Though ordinary in appearance, this little-known styling exercise was intended for a Detroit show as a proposal for Citroen to re-enter the American market. Nothing came of this no-name model.

It’s possible to trace the evolution of the 2CV from the 1936 TPV – French for very small car – single-headlight prototype to the final Portuguese production car in July 1990, the last of 5,114,966 units.

Among all the 2CVs is a special display of three dusty 2CV prototypes. During the summer of 1939 Citroen built a pilot run of 250 cars, brochures were printed and everything was ready for the 2CV to be launched at the Paris motor show in October. The outbreak of war forced abandonment of the unveiling and for decades it was believed all but two of the cars were destroyed to prevent their use by the Germans. Until, in 1994, workmen found an additional three TPVs walled up in the attic of a barn at a Citroen test centre. Deliberately hidden from the invaders and then forgotten, they were discovered by accident. Today, happily, they remain covered in grime and unrestored. And that, says Citroen, is the way they will stay.

At the other end of the scale are two presidential vehicles: the DS 21 Presidentiale (a one-off by Henry Chapron, used by Charles de Gaulle and stretching to 6.53 metres long, weighing 2660kg and powered by a regular DS 2.1-litre four) and the 1972 SM Presidentiale (a 5.6m four-door open cabriolet version of the Maserati-powered SM).

The thread that binds all these wonderful cars is creativity, imagination and genius. Is it too much to hope that the creation of DS as a stand-alone brand allows a revival of Citroen’s authentic character to push the boundaries of technology and style?

I’M NOT alone in thinking Citroen’s DS is the most beautiful car in the world. My addiction may colour such judgement, yet I contend that the combination of absolute purity of line, originality of concept, and radical – advanced is too mild a word for the breathtaking DS –
engineering and design created a car of unsurpassed beauty.

I still stop and stare whenever I see a DS, to admire the simplicity of its shape, the exquisite proportions of Flaminio Bertoni’s sculptured contours and the clarity of its detail design. Such is the depth of its cleverness, this most intellectual of cars can still surprise almost 60 years after it first stunned crowds at the Paris salon in 1955. “It is obvious that the new Citroen has fallen from the sky,” wrote famous French philosopher Roland Barthes of the DS. “Until now the ultimate in cars belonged in the bestiary of power: here it becomes more spiritual.”

The DS employed interconnecting suspension using high-pressure hydropneumatics and the engineers were brave enough to use the hydraulic pump and accumulator as a source of power for the brakes (pioneering the use of discs on a production car), steering and a Citroen-made semi-automatic gearbox with self-operating clutch. Inevitably, deliberately, the DS felt like no other car to drive.

It’s now common knowledge that the DS should have been powered by a horizontally opposed six-cylinder boxer engine – air and water cooling were tried at the prototype stage – but instead ended up with an evolution of the old four-cylinder lump from generations of Traction models. What I didn’t know until the Conservatoire was that Citroen explored a variety of different engines during the DS’s near 20-year life.

Among many on display, including the oldest known example (a prototype produced in July 1955), is a hard-worked 1967 DS mule, powered by a supercharged two-stroke 1.8-litre V4, with the compressor driven by an independent 200cc four-stroke engine, all intended to meet California’s proposed 1975 emission standards. Other DS engine projects included a 2.1-litre 90-degree sohc V6 and a 3.0-litre V8. The coming of electronic fuel injection and development of a new range of fours of up to 2.3 litres closed the internal debate.

As part of the DS’s 60th anniversary celebrations, Citroen also revealed many more of Bertoni’s styling sketches for the VGD project that became the DS and started as early as 1938. Interrupted by WW2, Bertoni began work again in 1945, the sketches tracing the car’s evolution until the front-end design was frozen in July 1954, the unique high-mounted ‘trumpet’ indicators coming just months later.

The DS was probably the furthest single step ever taken by a popular car company.