The former chief engineer is understandably nostalgic on what he’ll miss about the HSV we knew and loved.

His tenure at Clayton is a story of the rise of a man who’s helped put some of Australia’s – and, more recently, some of America’s – greatest performances cars on our roads. And that includes the W1.

“I’ve been fortunate enough to work for a great company in an awesome industry. From test trips around Australia, to travelling the world and doing what I love for a living,” he adds, “It’s been a dream job.”

It’s also a role that’s allowed Stoddart to operate behind walls, as engineers largely do, shielded from public view.

But that’s set to change. Now, he finds himself at the helm of Walkinshaw Automotive Group as managing director, replacing the long-serving Tim Jackson who parted ways with the company earlier this year.

We’ve stolen 30 minutes from Stoddart’s busy schedule to catch up on what Walkinshaw AG’s plans are moving forward with GM and its General Motors Specialty Vehicles operation.

Given he worked at HSV for just about two-thirds of its existence, though, it’s worth recounting what the man driving the company has achieved.

“I started at HSV in Engineering in 1997 – responsible for exterior and interior,” Stoddart says. “They had just launched the VT Commodore and my main project was the WH Grange. The 5.7-litre LS1 engine was about to replace the locally built 5.0-litre and 5.7-litre V8 in the VT Series II.

"From there I moved around the engineering department on different projects, then into program management where I was responsible for the Coupe4. I headed up the product planning department for a year or so before taking over as Chief Engineer in 2008.

“My first vehicle program in this role was the W427 – still one of my favourites! In 2019 I took over as Chief Operating Officer, which still encompassed Engineering and Design, but also took on Manufacturing, Supply Chain, Quality and so on.”

The list is illustrious, but Stoddart’s left out a few key points either for the sake of brevity or humility.

Between the Coupe4 and W427 he also was project leader on Clubsport-R, the HSV racecar that underpinned a one-make series in Bahrain. The much-acclaimed HSV E3 range arrived on his watch as well and the even more accomplished Gen-F came next.

Nevertheless, for all the glory projects there are stories he’d rather skip over.

In the same year, Holden announced it would be shuttering local manufacturing. Stoddart left the Walkinshaw Group to become head of research and development at Jayco Caravans.

The fun in figuring how a flush-dunny affects roll rates on a four-wheeler must have worn off quickly because the call of fast cars with big V8s brought him back to Walkinshaw Group in late 2014.

As it turned out, there were still plenty of things to keep him busy. Stoddart immediately sunk his teeth into the HSV Gen-F2 range before starting on a right-hand drive Chevrolet Camaro that turned out to be a defining project for the company.

In this, there was enough work to justify moving up the road from the former-Nissan plant on Rayhur St to a gleaming new corporate factory on Whiteside Drive in Clayton, Melbourne, so they just could fit everything under one roof.

Stoddart led a team of engineers that collaborated heavily with GM to ensure the right-hand drive Camaro also reflected the home-grown version’s handling prowess, while also qualifying the Camaro for ADRs, which included full crash and engine emissions testing.

The project cost $10 million all up, including the purchase of an F1-grade shaker rig, and introduced 357 bespoke parts to the HSV-built Camaro.

Today the Camaro is dead, but Stoddart maintains that was part of the plan.

What the project’s large cost bought the Walkinshaw Group, who retain the HSV brand on licence from Holden through Premoso (its other subsidiary alongside the Walkinshaw Auto Group) is something much more valuable than a fat profit margin; it was success for a proof-of-capability exercise.

The plan revealed itself when GM boss Mark Reuss announced this year there was an opportunity to grow a “specialty vehicle business” in Australia after it planned to apply the coup de grace to Holden.

MORE What made HSV so special

“Camaro was always intended to be a limited run program,” he says in response to being asked if it’ll return.

“We remanufactured just under 2000 Camaros, both SS and ZL1. The feedback we had from our customers was fantastic, but moving forward any decision to reintroduce would be up to GMSV.”

“We’re car people at Walkinshaw,” Stoddart replies when asked what experience from HSV he’ll use going forward, “and that won’t change regardless of what project we’re working on.”

MORE The most controversial comparo ever

“In addition to the passion and expertise we’ve developed over the years, we’ve also got long-standing relationships with GM International. We’ve worked with Holden, GM Asia Pacific, GM Brazil and of course GM in North America – I’ve been involved personally with each entity.

"We have built a great deal of mutual respect and trust over the years, so I expect that to continue.”

But when pushed on whether the two companies see themselves as partners, with shared returns, risks and rewards, he’s quick to redefine boundaries.

“We’re separate businesses,” Stoddart says, “and we [the Walkinshaw Automotive Group] work on a contract basis for the engineering and production for some of the models brought to market by GMSV.”

Australians will be fixated on what comes from the GMSV venture given it’s somewhat of a spiritual successor to HSV, even though Walkinshaw Group maintains HSV is still with us given it is honouring warranty claims, replacement parts and servicing schedules for customers.

Semantics aside, Stoddart won’t be drawn on much regarding the venture, deferring to GMSV if we really want answers on whether the venture is going to officially launch as planned this year, where cars will be sold and what GMSV will do to court the legions of defected Holden and HSV loyalists.

This will be the first time the Walkinshaw name will not be directly linked to the sale of new road cars to Australia since, well, ‘HSV’.

It’s easy to see how Australians could stand to benefit from more competitive pricing if development costs are shared, as well as more cars – given GM would no longer have to negotiate with a partner sales and marketing strategies.

Currently, the Corvette is locked in alongside the Silverado 1500 and 2500, but anything beyond that is pure speculation and, as Stoddart reiterates, we’ll have to ask GMSV.

MORE The story behind the HSV W427

The person in question at GM would be Joanne Stogiannis, the recently announced GMSV general manager and most likely Stoddart’s equal in future business.

“We work closely with all of our customers,” he says, “and while we’ve only had limited contact with Jo, that’s mainly due to the prevailing external environment. We’re looking forward to working with her and her team more closely in the future once conditions allow, and also once GMSV is fully operational.”

On balance, the venture should bear a number of fruits for the Walkinshaw Group, who could possibly re-establish access to old research and development haunts that dovetail back into the firm’s key strength: engineering.

Vinfast, who bought the Lang Lang proving ground from GM, is also a Chevrolet distributor in Vietnam.

“We’re yet to formally meet with the new owners,” he says, “but hope we’d be able to continue to utilise that facility.”

He’s also keen to remind us that, “it’s not the only facility we use for development, though. We use closed circuits, other testing facilities and real-world tests to validate our products.”

So what ambitions does Stoddart harbour for his tenure? “We’ve been through a significant transformation over the past three years,” he says about Walkinshaw AG.

“We are expanding our Design, Engineering & Manufacturing services to the broader automotive industry. We have invested heavily in capital and people in order to retain some of the Australian automotive knowledge.

"I would like to keep building the Walkinshaw brand – securing new customers and growing the organisation.”

On a personal level, Stoddart has a long tail of experience to draw inspiration from moving forward.

“I’ve been fortunate to meet and work with some significant automotive figures – locally and internationally. I take inspiration from all of them for different reasons – they all have unique qualities and have succeeded in different environments. Seeing Tom [Walkinshaw] command an audience was always a highlight.

"Being an engineer and a race car driver, he always pushed our team to the next level.”

Of course, the man behind the business name, Tom Walkinshaw, is not with us anymore. He lost a battle with cancer in 2010.

But his son, Ryan, is the director at Walkinshaw Automotive Group, and the desire to keep racing – as his old man did so well – with Walkinshaw Andretti United in Supercars beyond 2021 is strong.

“We’re talking to a few interested parties about involvement in Supercars,” Stoddart says in regards to what replaces the Commodore after 2021.

“What I can say is that Supercars is important to us as a group – and we’re committed to the series.”

We finish the exchange with a question on what Joel Stoddart considers the proudest moment of his career.

Fittingly, we arrive back where this story began. “HSV was the place I wanted to work at as a young engineer, so the day I received a letter offering me a position was pretty special,” he says.

“Launching the GTS-R W1 at Phillip Island – knowing it was going to be the end of an era, but giving the brand and the vehicle an appropriate sendoff was probably the proudest.”

Stoddart puts the Coupe4 in his top-three HSVs. It was another right-hand drive swap project since it started life as a Pontiac GTO body-in-white. Despite the AWD grip, its 270kW/475Nm hit 100km/h from zero in 6.1sec.

It made a street-driven LS7 powered Commodore a reality. From 7.0 litres the W427 punched out 375kW and 640Nm, offered magnetic dampers and a six-speed manual. Another top-three HSV for Stoddart.

As the third HSV Stoddart places in his top three, the W1 shoved GM’s LS9, with 474kW/815Nm, into the Gen F2 GTS-R and reworked the drivetrain just to fit.

The LSA powered Gen-F was a high-water mark for the GTS nameplate, debuting supercharged V8 grunt with 430kW/740Nm and excellent rear torque vectoring.

While far from a run-out sales success, the ZL1 represents the peak in the Camaro program after certifying its 477kW/881Nm LT4 for Aussie roads. 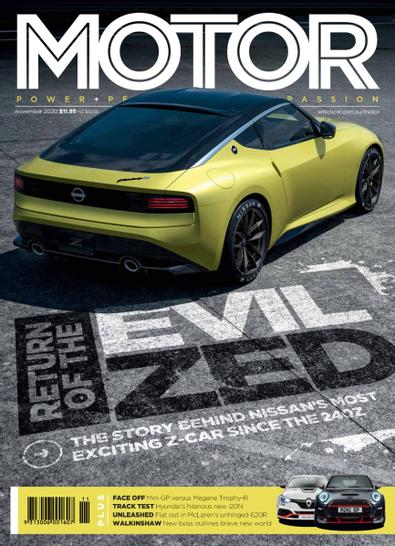