MOTOR has learned that following the cessation of local manufacturing, four GTSR Maloo W1s were built by Walkinshaw Performance for a handful of people in HSV’s inner circle.

UPDATE: Since this story was originally published two more Maloo W1s have been completed and you can find details on this later in this article.

An HSV spokesman told MOTOR the company wasn’t actively hiding the cars but simply chose not to publicise their existence, however, it’s understood the owners were required to sign contracts promising their silence before, during and after the build process.

All four cars feature every mechanical modification made to the 275 W1 sedans with the exclusion of the side skirts – the Maloo has a longer wheelbase and therefore different skirts – and quad exhaust outlets. 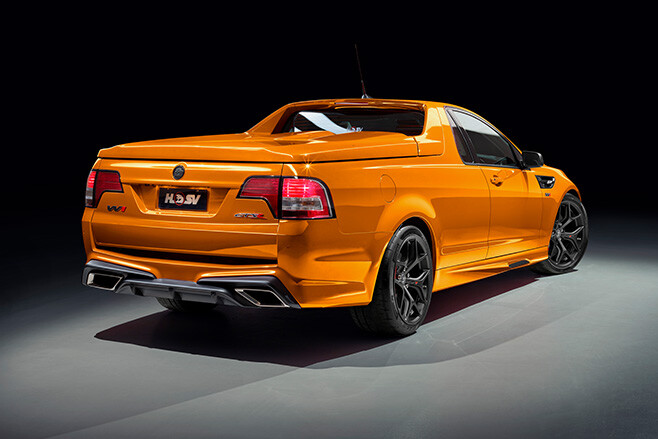 As such, the Maloo W1s use the 474kW/815Nm 6.2-litre supercharged LS9 V8, modified to work with the Commodore’s electric power steering, and TR6060 close-ratio six-speed manual gearbox.

Maloos aren’t compatible with HSV’s Magnetic Ride Control, but the specially developed Supashock dampers fit just fine, the only modification being a slight tweak to the rear anti-roll bar setting.

Wheels are 20 x 9.0-inch front and 20 x 10.0-inch rear, wrapped in Pirelli P Zero Trofeo R track rubber and covering 410mm fully-floating two-piece rotors and six-piston calipers up front with 372mm rotors out back and four-potters at the rear. Obviously, there’s no Aeroflow spoiler, but the carbon front-guard inserts make an appearance, while inside the diamond-quilted Podium seats and Alcantara-wrapped steering wheel and gear lever are all present and correct.

The program was born when HSV itself investigated the possibility of producing a limited run of Maloo W1s, the business case for which didn’t stack up due to the cost of calibrating and validating such a limited run of cars.

Even so, the process was expensive, as Walkinshaw must provide evidence that the W1 alterations meet the relevant standards. No party was willing to go on record as to how much the Maloos cost, but a source told MOTOR “decent Lamborghini money” was a good guide.

The four lucky recipients are a closely guarded secret, however, we can confirm one of the Maloo W1s is painted in Light My Fire (gold), another is in XU-3 Yellah, the same hue as the original VS GTS-R, while a third is red and the fourth is matte grey.

In the time since the original build run of four cars, MOTOR has learned two more Maloo W1s - one white and one green - have been completed by external parties (ie not by HSV) to the same specification bringing the total number of cars to six. Whether that makes the final two examples 'official' W1s is a matter for personal interpretation.

Given the outrageous sums of money W1 sedans are changing hands for, it might seem odd that HSV couldn’t make the business case work for a limited run of Maloo W1s, however, part of the problem was only a limited number of LS9s could be sourced.

Any Maloos built would have reduced the number of sedans available, with HSV telling MOTOR it was confident the sedan would be the more popular package.

Nonetheless, while the Maloo W1 was not an official HSV program, kudos has to go to the company for allowing a limited run of these special Maloos to be built, cars whose stories will be followed for decades to come.