We put HSV’s new GTS-R line-up, including the GTS-R W1, through the wringer at Australia’s fastest race track.

IN AN era defined by nonsense, self-interest and post-truth bullshit, there’s a warm-and-fuzzy feeling knowing that the final MY17 Holden Special Vehicles Commodore V8s will be bottlers. If you expected a bent-eight celebration rather than maudlin commiseration as Australia hangs up its manufacturing boots, then the Clayton crew have something for you.

Faced with the looming uphill battle of no more rear-drive V8s to satisfy its muscle-car-loving customers, HSV knew it needed to produce something special to farewell an Aussie motoring icon. Something like the gobsmacking HSV GTSR W1.

Make no mistake, this is no stripes-and-decals money-spinner, and nor is it merely a fettled upgrade with a brag-worthy new badge. It’s the frigging duck’s guts, fulfilling every muscle-sedan fantasy anyone could have ever dreamed of. Even compared with its likeness – HSV’s ‘regular’ GTSR sedan and Maloo GTSR ute, each sitting above a series of ‘HSV 30’ anniversary models for 2017 – the W1 is on another level.

Gone is the standard GTSR’s excellent Magnetic Ride Control (MRC) adaptive-damper suspension for a fixed-rate SupaShock set-up derived from that used by V8 Supercar racecars. And instead of the already-ballistic 6.2-litre supercharged LSA V8 featured in the GTSR (tweaked to produce 435kW via a new K&N air filter), the W1 gets the dry-sumped, mad-hatter LS9 V8 shared with the iconic Chevrolet Corvette ZR1.

With a torque figure hitting 815Nm, the W1’s LS9 heart transplant also demanded a transmission that could handle the additional muscle. The existing Tremec TR6060 six-speed manual still has enough headroom in the MY17 HSV GTS and GTSR (each with 740Nm), but in HSV’s superhero, it cops a new MH3 close-ratio gearset from the Corvette, as well as a unique input shaft – rated at 850Nm – specifically for W1. And there’s a ZF Sachs twin-plate clutch with a solid flywheel. 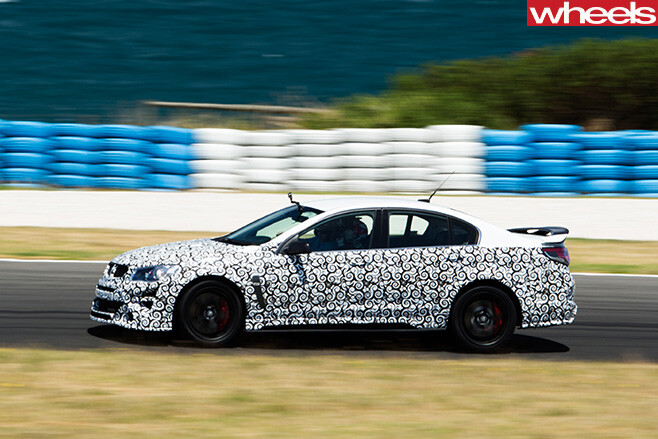 About the W1’s only carryover item, if you could call it that, is the upgraded braking system shared with GTSR sedan and ute. Monoblock forged-aluminium, six-piston calipers ensure there’s just enough room for massive fully-floating 410mm cross-drilled rotors up front, the set-up weighing 10 percent less than the GTS’s 390mm package, yet with a 25 percent increase in pad area. It’s the greatest braking system ever offered on an Australian production car, and in the W1, it works in unison with road-legal race tyres – namely Pirelli P Zero Trofeo R rubber measuring 265/35R20 up front and a phwoar-worthy 295/30R20 at the rear. With torque vectoring now standard across the entire range (previously just GTS), the ‘HSV 30’ cars prove that even at entry level, there’s more meat than an abattoir in every MY17 HSV. An engineered slalom course reveals that even the long-wheelbase Maloo R8 has the turn-in response and agility of a much-smaller car, backed by a deliciously fruity timbre from its new exhaust system, garnished with plenty of crackle and pop on overrun.

Full-noise track laps prove the beefy manual Maloo is one of the true gems in the MY17 range. Not only is it cheaper than its Clubsport R8 cousin (by $3000, making it the most affordable HSV) but the combination of its Caprice-derived wheelbase and lighter tail means there’s loads of throttle-adjustable fun to be had at every turn.

In comparison, the shorter-wheelbase Clubsport R8 sedan feels tighter and grippier, with greater power-down ability and a neater, faster approach to track-lapping. Next up in rank and price is the new GTSR model line. With the aforementioned power upgrade and braking package, not to mention bespoke front guards (12mm wider per side) with a bulging ‘Coke bottle’ shape that sees the panel crease next to the bonnet shutline swell outwards to house the super-fat rubber in the W1, the 435kW/740Nm GTSR sedan and Maloo GTSR are clearly the alpha males in the HSV family when only the lesser Clubsport and Maloo are around.

The tweaked LSA V8 is definitely stronger, with a richer mid-range and fleshier torque, and there seems to be a greater emphasis on torque vectoring directing the GTSR’s nose towards the apex, making it easier to get power down out of slower corners. It’s a superb combination, as if this is the car the Clubsport wants to be when it grows up. But it’s the monster braking performance that really stands out. The upgraded stoppers are phenomenal, pulling up the GTSR consistently from 200km/h for Phillip Island’s second-gear Honda hairpin, lap after lap, with incredible consistency.

Finally, it’s W1 time. The pair of pre-production cars we’re presented with are covered in black-and-white camouflage, and come equipped with either Warren Luff or Tony D’Alberto riding side-saddle to make sure the cars return to pitlane in one piece. But the W1 is nowhere near as intimidating as its on-paper stats might suggest. Its Alcantara-clad steering wheel and gear lever make a sensual first impression, yet so does its magnificent drivetrain. Forget the driveline snatch and immense clutch weight that used to go with the territory; the W1’s engine is sweetly tractable and its clutch achieves a remarkable combination of lightness and a smooth, progressive feel, making it even easier to drive than a normal HSV.

As the motley W1 noses out of the pits, I squeeze the throttle flat in second gear and immediately swoon over its dirtier, old-school V8 exhaust note. The LS9 is an angrier engine than the LSA, with a proper ‘big-block’-style burble, yet it’s also keener to rev, swinging the W1’s red tacho needle towards its 6600rpm cut-out with greater intensity than the normal GTSR’s 6200-limited LSA. The GTSR will blast from the Honda hairpin in second gear, followed by a brief moment of full-throttle in third before approaching the uphill left-hander at Siberia. In contrast, the W1 hooks up its enormous rear Pirellis and delivers racecar-style corner-exit punch entirely in second gear. By the time the W1 starts to turn into Siberia it’s only just brushing 6000rpm or so in second, yet it’s also clearly faster than the LSA-equipped GTSR.

HSV claims that so far in testing, the W1 is 4.4sec faster around Winton than a GTS, and driver Warren Luff puts roughly half of that down to its superb tyres. But there’s also the SupaShock suspension, which feels more rigidly tied down than the GTSR’s MRC set-up in Track mode, despite no longer being a pure coil-over arrangement like the race car. The spring and the shock have been separated, which means the W1 ultimately loses around five percent in chassis performance, but gains 95 percent in refinement compared with a pure coil-over.

Indeed, HSV describes the W1’s on-road ride quality as “firm but not harsh”, and there’s no indication at Phillip Island that we shouldn’t believe the engineers. But with only two flying laps to experience what 300 lucky customers will following the start of GTSR production in April, it’s that dirty LS9 shove and the immense capabilities of its tyres, brakes and handling that continue to be rammed home, corner after corner.

Even in not-quite-finished guise, there’s no doubt the W1 is the greatest performance car Australia has ever been proud enough to produce. But that shouldn’t take anything away from the similarly excellent GTSR sedan and Maloo ute, or even the standard 30thanniversary range.

Besides the fact that all 300 will set out in moments, even a small taste of the GTSR W1 proves it’s way beyond expectation. Muscle-car butch combined with tangible doses of polish and refinement, it’s a fitting tribute to 30 years of homegrown bent-eight bravado. All hail W1.