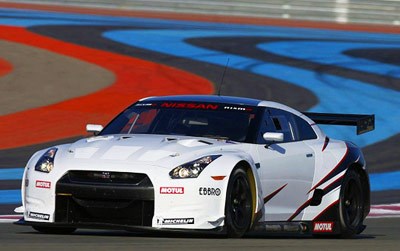 Nissan's official entry into the FIA Championship is finally up to speed.

The GT1-spec R35, seen here testing in France, the Nissan/Nismo/Gigawave collaboration sees the twin-turbo six replaced with a naturally breathing, high-revving 5.6L V8 developing 448kW and 650Nm through the rear wheels only.

The GT-R will run four races this year, before a full-on program in 2010. It debuts at Silverstone on May 3.