Our festival of figures may not have delivered any shock defeats, but it did prove two things: local muscle-car buyers have it very good, and V8 Supercar drivers earn every cent ...

To fully appreciate just how well these cars perform, we really need something mundane for reference, to demonstrate just how far above the pedestrian the bar is set with high-performance Aussie road cars, and then how much higher again it's lifted by the two race cars.


Fortuitously, the G-force figures for a current Falcon XT and a Commodore Omega were available. These were set on a different track (Oran Park's skidpan), which is concrete (Calder's bitumen is likely to offer more grip), using a different driver and a lot slower. But the data is enough for ballpark comparisons.

Both poverty-pack road cars delivered around 0.4G of straight-line acceleration, about 0.9G of braking, and about 1.0G in the corners.

The F6, GT and GTS raise the bar significantly, each offering about 50 percent more straight-line acceleration, and about 10 percent more outright cornering capability. The F6 and GT both offer about 20 percent more braking. On paper, the GTS doesn't appear to up the ante much at all under brakes. What the performance cars here do is generate their peak brake force at higher speeds, with more weight to haul up. Their brakes are, literally, more powerful.

It's also worth remembering that the performance-car experience isn't just about the numbers - these cars are set up so they're happier approaching (and at) the limit.

And the W427? It's just that much better again - at everything.

The next step up is even bigger. A V8 Supercar slashes 11 seconds a lap from the F6 and GT, 10 seconds from the GTS and even steals 7.6 seconds from the W427 - all massive margins. The gains are carved out by being better at, basically, everything.

Is there a 'comparable' road car to compare the V8 Supercars against? Nearest thing to hand was the data for a Porsche 911 GT2 on Oran Park's North Circuit (archived from the recent Wheels Handling Olympics). The GT2 makes 390kW and weighs 1440kg, so it's about 80kW down on power and about 100kg heavier than a V8 Supercar. Still, it delivered 0.7G of straight-line acceleration - equivalent to the FPR race car at Calder, but not quite up there with the HRT ride car.

It also managed a Herculean 1.3G under peak braking, equalling the FPR racer's effort, albeit at considerably lower speed (therefore less outright braking power). In cornering the GT2 delivered 1.2G at Oran Park, about 0.2G behind the FPR car at Calder, and slightly closer to the HRT ride car's peak cornering ability - the slicks on the racers are probably 90 percent of the difference here. 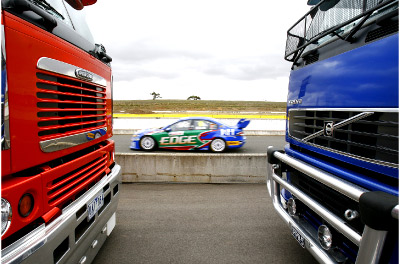