The Weekend Read: End of the Line

In February 2013, Peter Robinson drove from Sydney to Adelaide in the Holden VE Commodore, the last clean-sheet Australian car, to reflect on what future generations will miss

IN the true dark night of my soul, I always knew Holden’s VE Commodore would be the last all-new Australian car.

Deep into writing Autobiography, my book that chronicled the VE story – from Mike Simcoe’s first proportion-defining scribble to the 2006 press launch – it seemed to be accepted as a sad inevitability inside The General. The indigenous Australian family car, designed, engineered and manufactured locally, could never be sustained in an era of global product development and ever tougher emission and fuel standards.

Falling domestic demand for large family cars during the life of VE and a dramatic plunge in exports simply confirmed that the huge R&D investments required for a new Australian car were impossible to justify.

Next year’s VF – a refresh, not the once-planned, pre-GFC, new top-hat of the VE – continues the concept. But already we know General Motors and Holden have no plans for a true home-grown successor. Pragmatism rules.

When the last VF slips off the Elizabeth, South Australia, assembly line at the end of the decade, at least 70 years after Ben Chifley unveiled the first Holden, the locally built Commodore will be replaced by something Chifley would have struggled to comprehend, or recognise. Perhaps a mid-sized, front-drive sedan, or, more likely, a compact SUV.

To investigate the validity, even the relevance, of Australia’s love affair with our native cars – for 60 years our best sellers, until being deposed by the Mazda 3 in 2011 – just months before the launch of the VF, Wheels collected a VE in Adelaide for the long haul to Sydney.

Wielecki’s unimpressed. “They’re for someone with bad taste who wants to go to the Summer Nats,” he bleats. I whinge that the rear spoiler detracts from what otherwise, despite familiarity, remains a desirable and superbly good-looking sedan. A slightly curmudgeonly start to three days on the road together, then.

With the odometer reading a mere 195km, the VE heads towards the swooping, cresting, cornering roads of the Adelaide Hills. Any serious wheel twirling will happen in the next few hours, with the rest of the journey all seemingly endless, arrow-straight roads.

Already I’m taking advantage of the bent-eight’s bottom-end flexibility, loving the subtle V8-burble, the tall gearing and bemoaning the day when lazy, big-capacity engines are no more.

One run up and down through the precise, rather than heavy, short-shifting, manual box – with its firm yet smooth clutch action – convinces me of the recent progress Holden has made in drivetrain refinement. Cohesive, no slack, no rough edges, exactly what a keen driver expects from a big-muscle sports sedan.

No surprise, then, that 20 percent of Commodores are V8s and, of those, an amazing 40 percent still drive via a clutch. It’s a percentage of manual take-up rarely seen anywhere in the market, or the world, today.

In the VE’s six years, steering ratios have generally quickened and the Commodore now feels slower to react through the first 15 degrees of wheel movement than it should. So, while it still feels planted, comparatively, the latest car isn’t as agile as it might be. Will the VF’s electric steering use a quicker rack? We’ll soon know.

I’ve never bonded with the VE’s excessively large-rimmed and big-diameter steering wheel, and that hasn’t changed. Unwelcome reflections under the midday sun mean reading the instruments is near impossible, while the red-numbers-on-black of the trip computer become an endless source of frustration, legible only in the dark.

Barely above idle at 1600rpm, the Commodore effortlessly pulls sixth gear up the long Eagle on the Hill climb. The L98 270kW V8’s torque peak is 530Nm at 4400rpm, but the torque curve’s plateau feels as high and flat as Uluru.
Crawling between shops down Lobethal’s narrow main street, it’s ridiculous to imagine that this village in the Adelaide hills was home to a sealed 13.8km street circuit, which hosted the 1939 Australian Grand Prix.

Frieda, who migrated to Australia with her parents as a 14-year old from Austria in 1956, shows us the two chequered poles that mark the start-finish line of a race won by Allan Tomlinson in a supercharged MG TA, at an average speed of 135km/h, in front of 60,000 spectators. There’s also a plaque: ‘In Memory of the men and machines that competed on this circuit at a time when motor cycle and racing cars were symbols of speed and courage.’ Indeed; Lobethal was Australia’s Spa: no run-off areas, racing at daunting speeds along fence-lined, high-crowned country roads with three long straights; a circuit dubbed Australia’s greatest by three-time AGP winner Doug Whiteford.

Frieda remembers the 2009 Lobethal Grand Prix revival, with a 93-year-old Tomlinson (who died in 2011) driving a replica of his winning MG down the street, but is keener to tell us that as teenager she earned five shillings (50 cents) an hour picking peas, twice what her parents were paid to work in Lobethal’s famous Onkaparinga tweed factory. “All we could see,” she says wistfully, “was peas and green trees…it was the end of the Earth.”

Instead of the M1 motorway, we deliberately head the VE onto the 13km of the old Princes Highway from Nairne to Kanmantoo. Off-camber blind corners, closing-radius bends, mostly bumpy surface, up and down, this road perfectly defines the challenges thrown up by the Adelaide Hills.

The VE storms the conditions, despite my self-imposed 4000rpm rev limit to run in the engine and transmission. Instantly at home, the FE3 suspension tune, introduced on the Series II, might have been specifically engineered on, and for, these roads. Firmer dampers and thicker rear anti-roll bar, plus an infinite degree of clever work on the chassis, add a subtlety to the body control and ride quality compared with the firmer and less supple FE2 setting.

Enthusiastic cornering occasionally set the stability-control light flashing, without annoying intrusion. There’s no crash-through on bumps, the front Brembo brakes are strong and progressive, the VE calm, confident and rewarding. Balancing the gentle turn-in understeer on the throttle, the chassis absorbing all the bumps thrown at it, I simply refuse to believe Holden’s soon-to-arrive Malibu, fully imported from the USA, will cope with even remotely the same assurance.

Wielecki, an inveterate adventurer – he once took four months to ride a 110cc postie bike across Australia – loves the weird. He’s spotted a variety of sculptures at the entrance to a property on Strathalbyn Road. These wondrous contraptions turn by wind power, including one that looks like it’s driven by a bloke on a bike, but isn’t.

Tailem Bend and a fast-flowing Murray River come and go before the VE heads south to Meningie and the marsh lands, salt lakes and the sweet seaweed smell that characterises the Coorong. Wielecki, sighting a pink lake, is keen to use the location. After checking the salt’s firmness, the Holden creeps along the tracks, is snapped, and safely returns to the blacktop. Not so the aging Toyota Land Cruiser that’s driven straight off the road and immediately sunk into the salt, just a few metres off the sealed surface. Alex, a Pom, and Jessica, his Oz girlfriend, aren’t concerned, despite their wheels sinking ever deeper, even with the front diff locks engaged and low range selected. Pushing achieves nothing. We leave them – yes, with a supply of water – as Jessica attempts to thumb down a helpful tradie.

I want to refuel for the run north to our overnight stop in Bordertown, but bloody Wielecki wants to shoot the Commodore with Kingston’s Big Lobster – 17 metres high and four tonnes of questionable sculptural value.

The 12.4L/100km is reasonable given the performance, but confirms that the VE’s 71-litre tank fails to deliver a big-country-suitable range when tied to the bent-eight.

We drive the 116km to Bordertown at a steady 130km/h and see two other vehicles. Our boredom is shattered only by an explosion of sound. A bird has smashed into the driver’s exterior mirror, breaking off the upper plastic cover. Thomas finds the dead bird, I locate the mirror section and refit it. No damage apart from a couple of tiny scratches. Tough car, the Commodore, and that’s the thing – this car is designed to beat the Aussie Outback. Today, too few buyers care, and those who know still demand the image of an off-roader when they hit the Grey Nomad trail with a caravan.

The 133km from Bordertown to Pinnaroo, an utterly composed 160km/h cruise, tacho needle hovering over 2400rpm, is broken only by Wielecki’s enthusiasm to capture a field, the cloud and the colour of the grass. Traffic? What traffic, beyond a lone school bus.

The Mallee Highway heads east into Victoria, through a series of depressing, near-derelict Soldier Settler towns that struggle to survive. I don’t dare draw any parallel to the Commodore’s future. We cross the Murray again at Tooleybuc, heading east to Deniliquin on roads that are as flat and wide as they are lonely. The Commodore eats the desolate, treeless landscape.

What will happen to ‘Denny’, self-proclaimed as ‘The Ute Capital of the World’ and host of an annual festival celebrating them, when Ford and Holden stop building them? A Ranger and Colorado Muster? I think not.

The Commodore treats the gravel road with disdain, proving again that no import can match the effectiveness of the subtle, local tune of stability-control and ABS systems. If only the interior showed the same capability; it’s the most obvious area where the Commodore has fallen behind the opposition. In terms of materials, quality of fit, design and equipment the dashboard lacks the class you expect from a $55K sports sedan. Bloody hell, even the navigation takes an eternal 36 seconds to boot up. Expect a massive advance in VF.

Narrandera throws up the Mary Celeste of servos, a deserted Caltex station that’s been closed for eight years. How it could die, located at the busy junction of the Sturt and Newell Highways, is a mystery.

Finally, there are corners again, joyous corners, on the road from Junee to Gundagai and the Hume Freeway. Engine breathing hard, running the V8 out to the soft 6100rpm limiter, the SSV proves its credentials as a serious sports sedan. It feels supremely strong.

In terms of responsiveness, performance, chassis balance – particularly how you can lean on the outside rear rubber – consistent steering behaviour and comfort, there is nothing like the Commodore (except the Falcon, of course) at anything close to the same, affordable price. Overall consumption, to the last fill before Sydney, reveals a 12.9L/100km average.

Australians won’t truly appreciate what they’ve lost until the domestic cars disappear. So please, enjoy the Commodore (and the Falcon) while you still can. 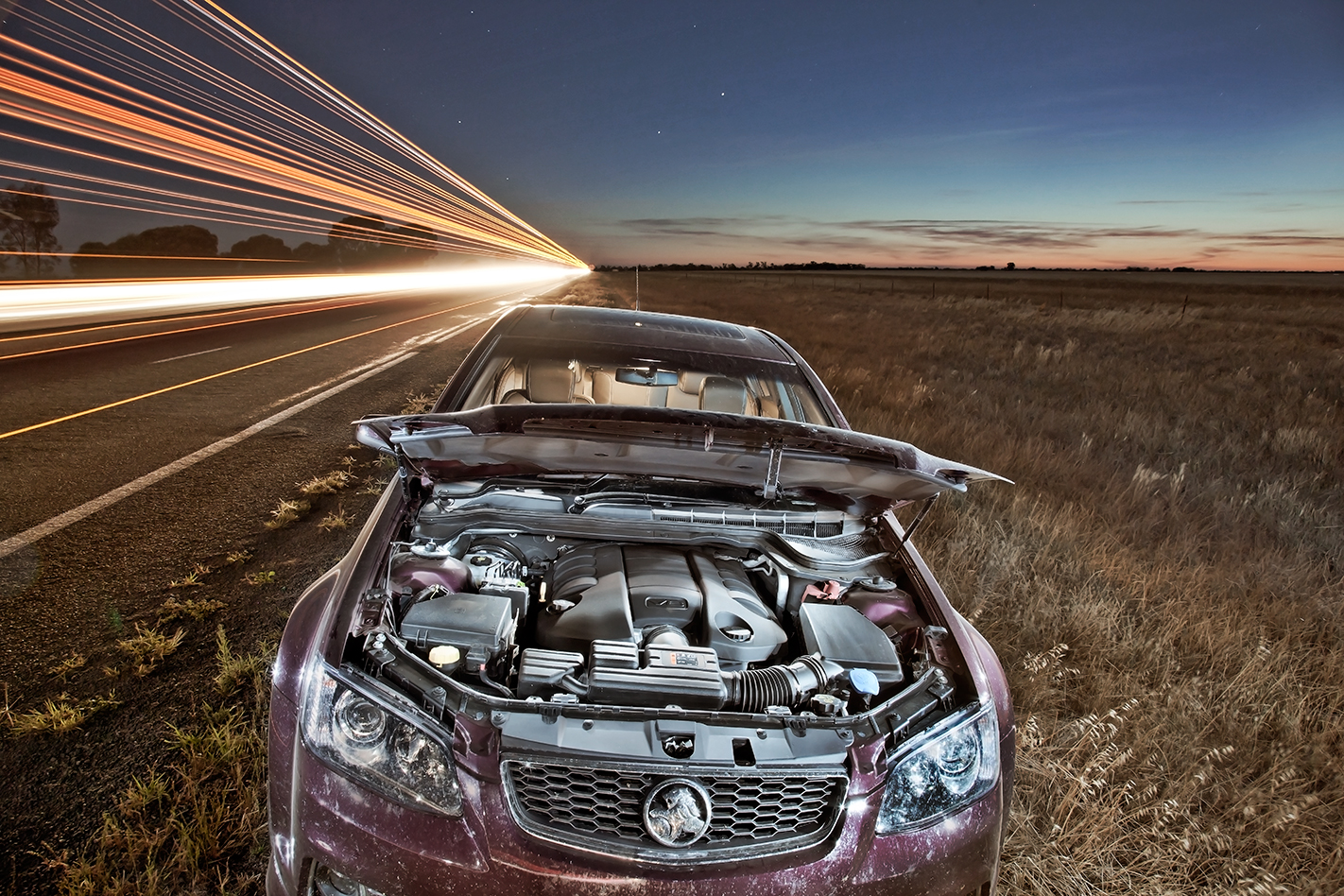 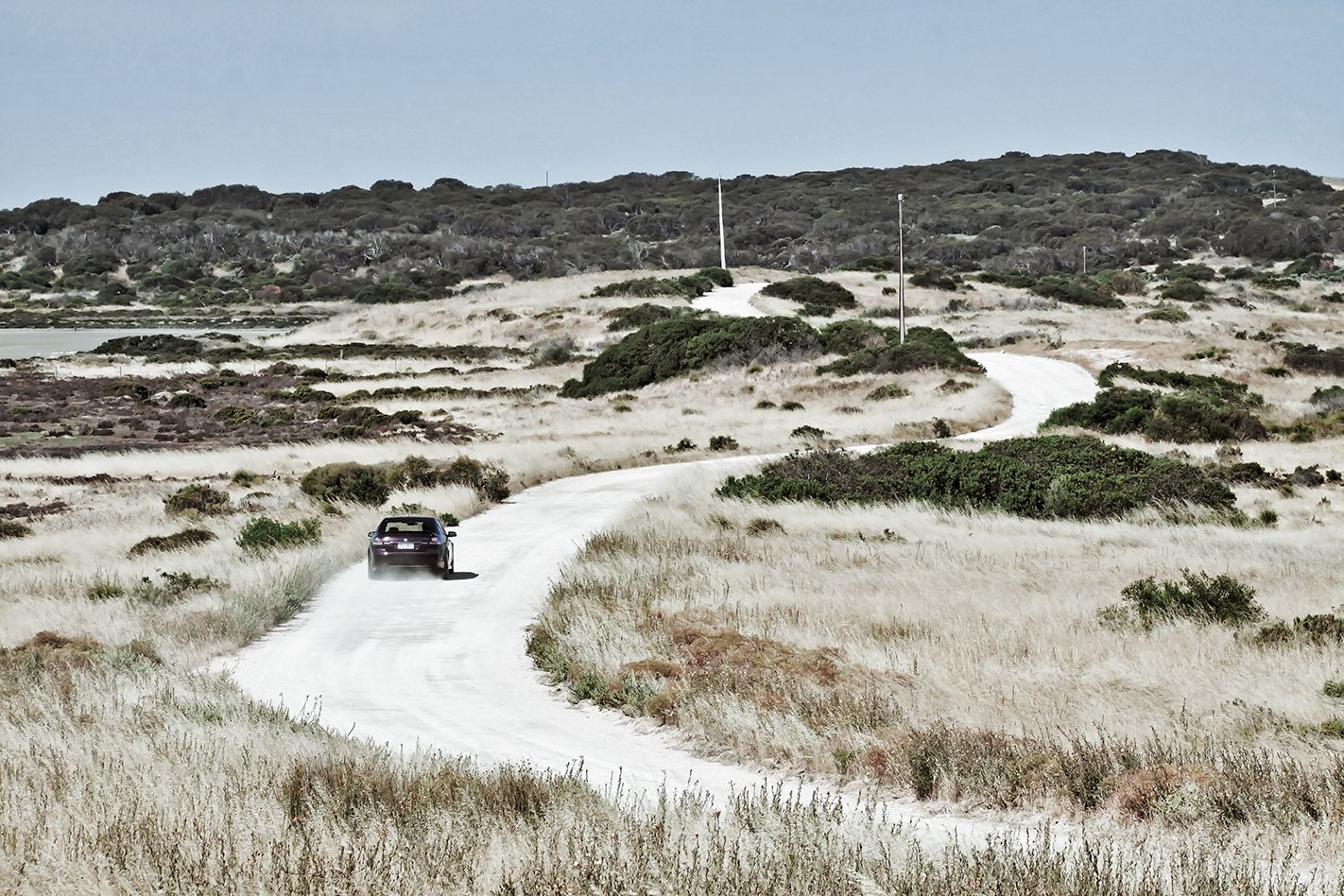 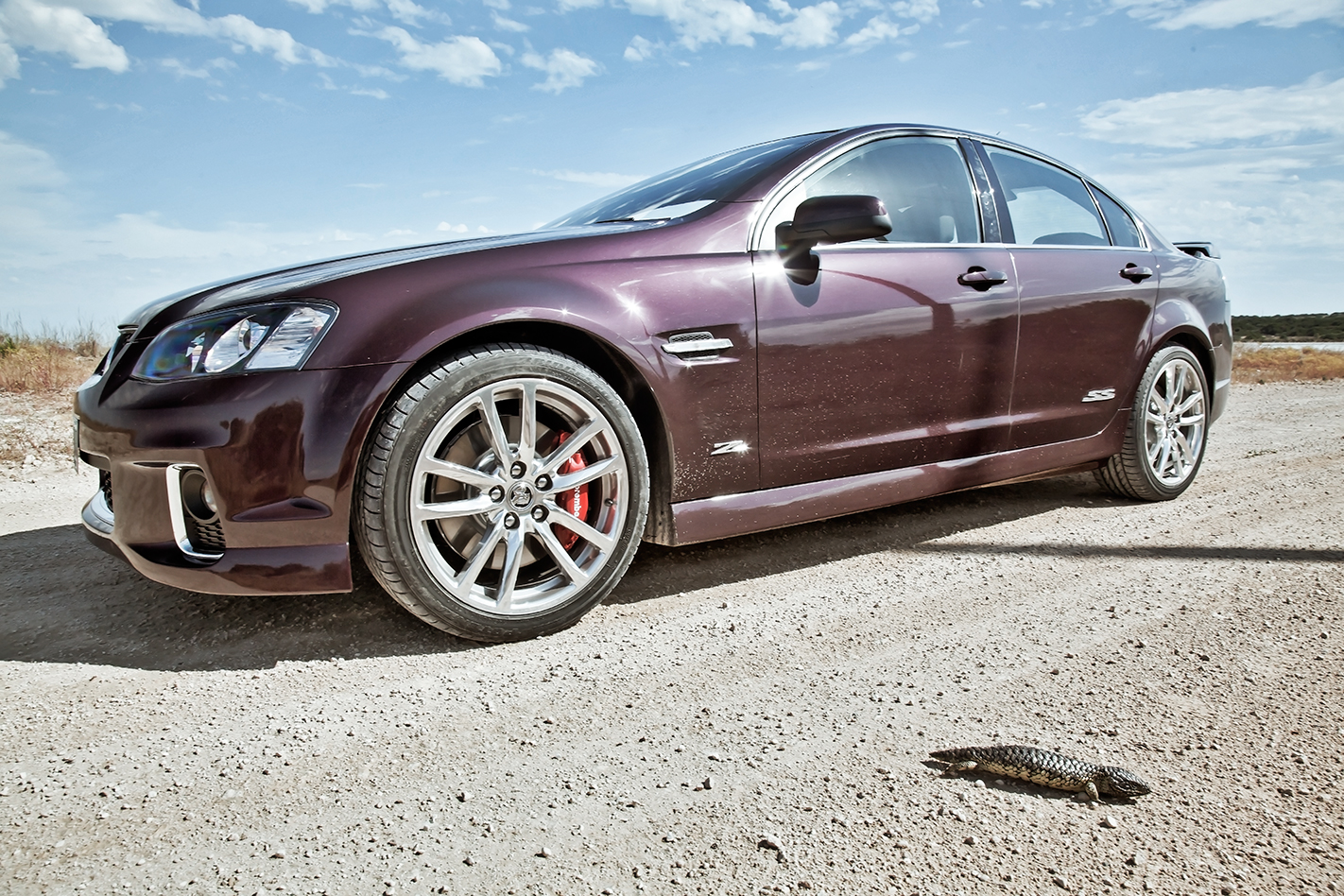 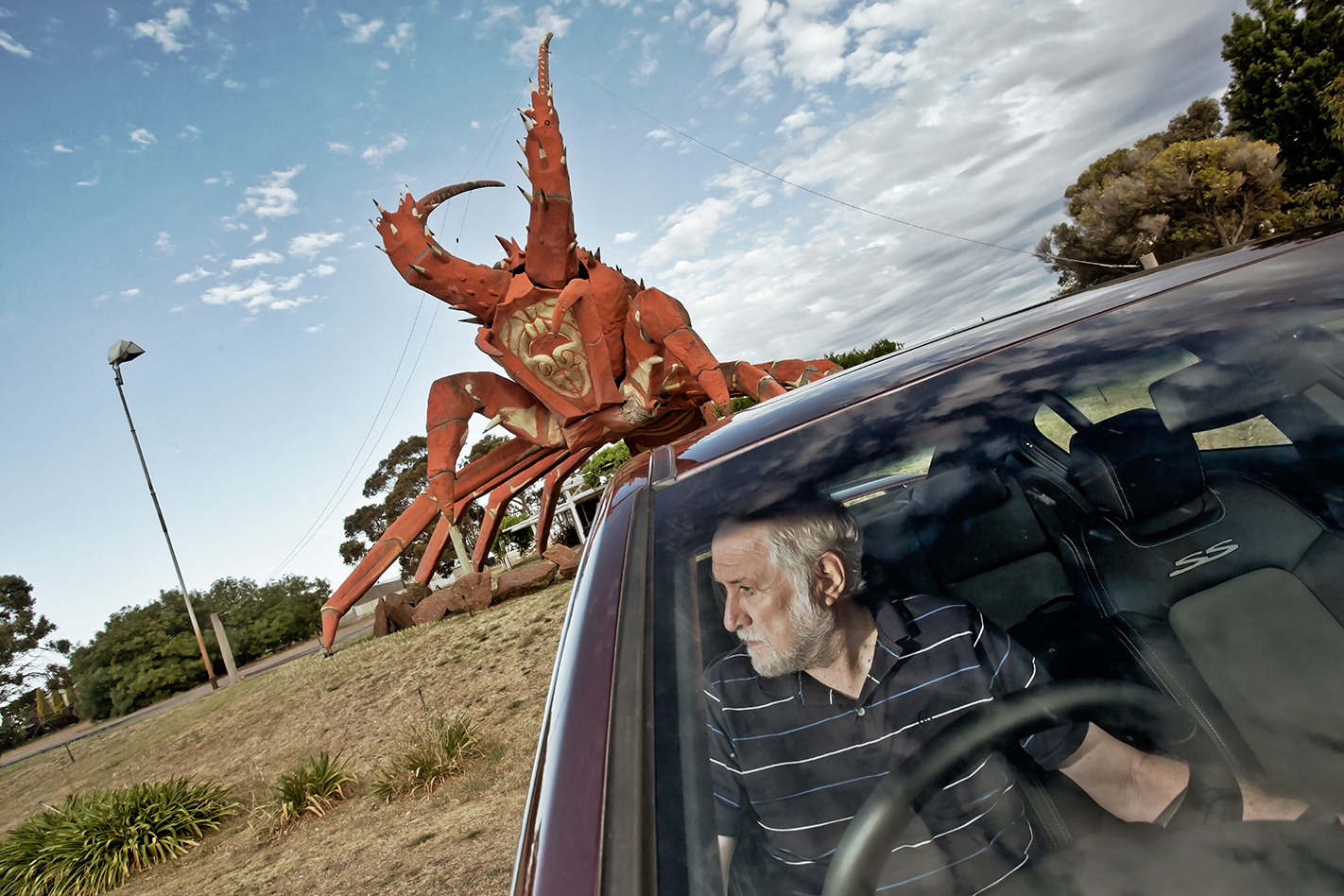 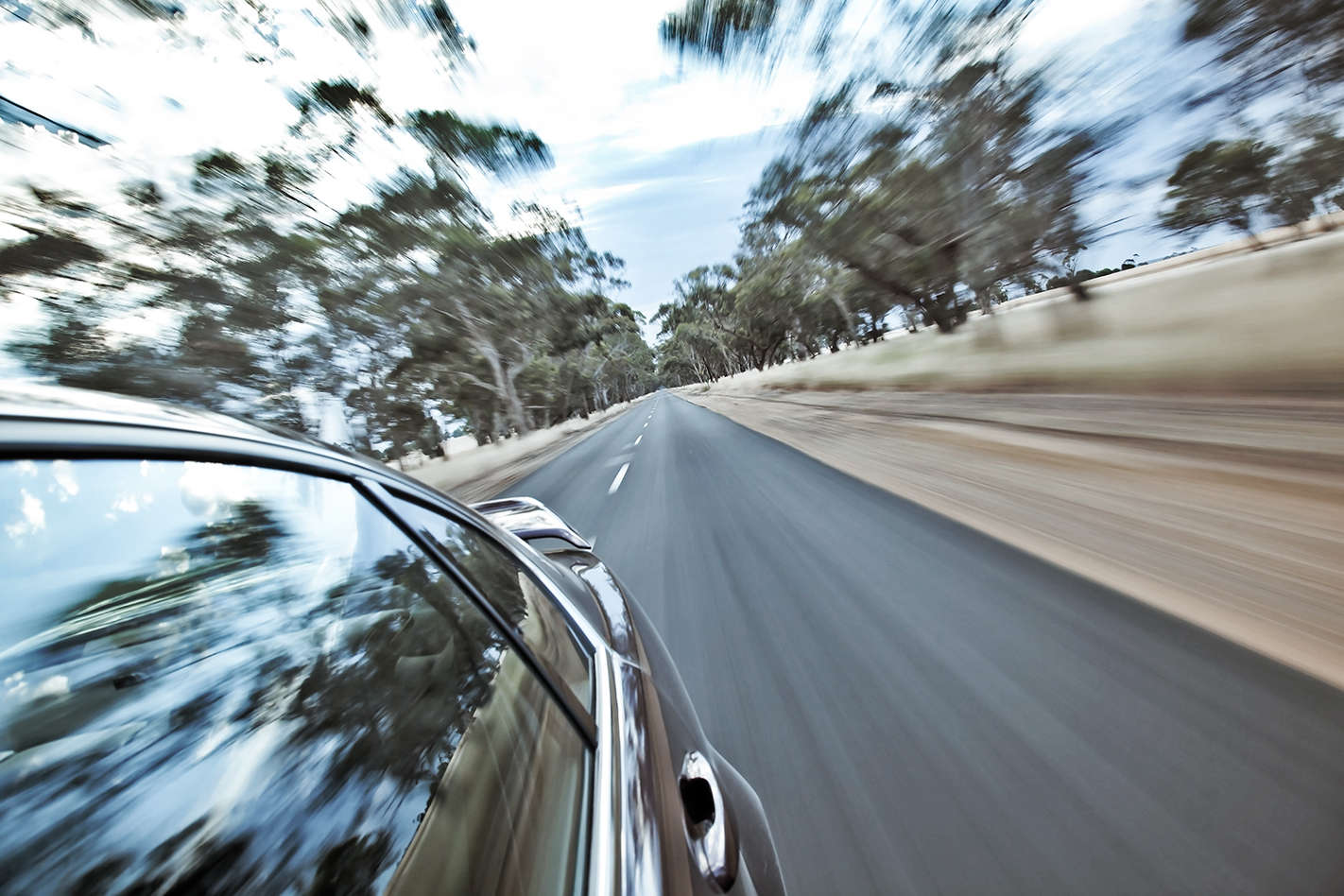 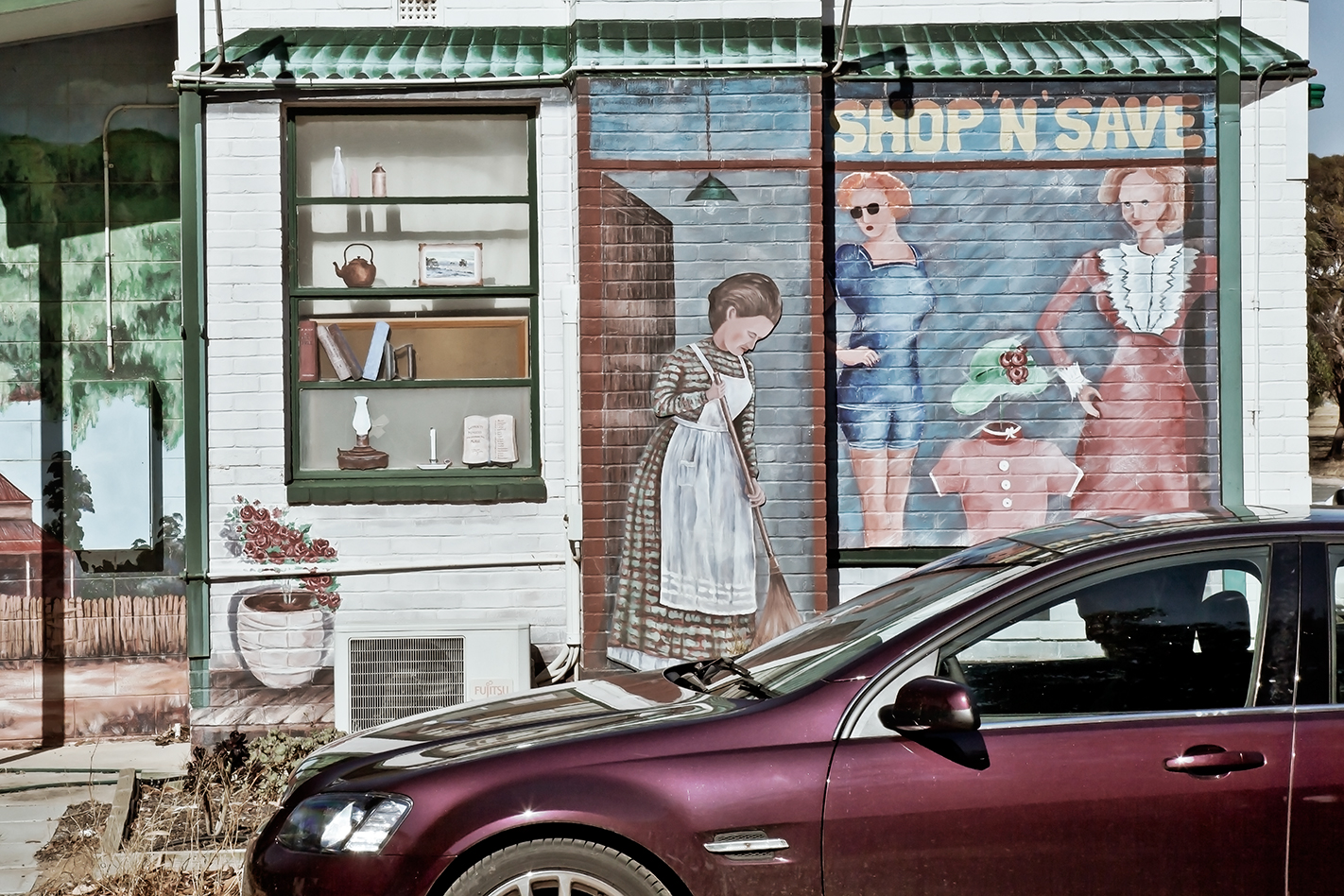 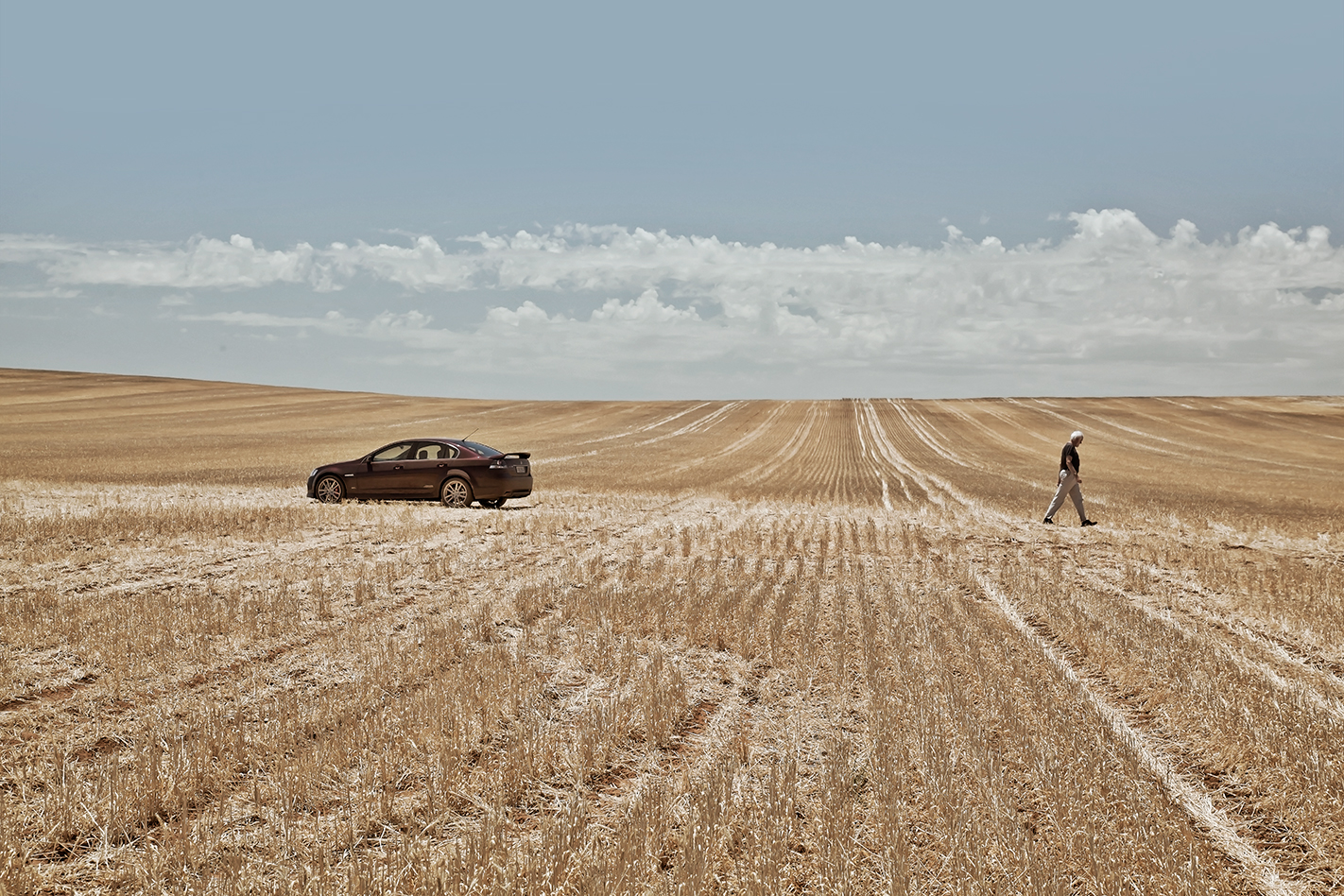 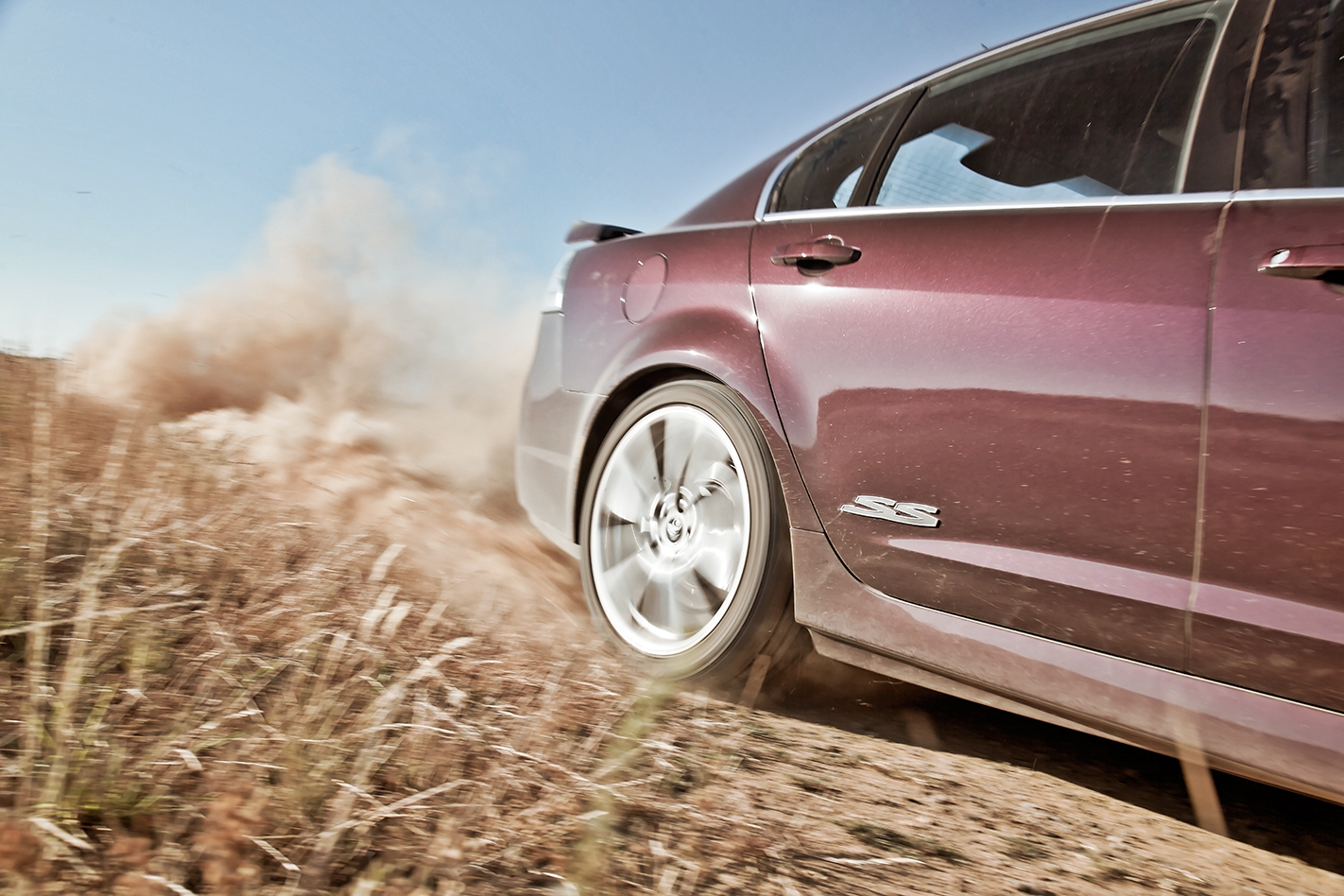 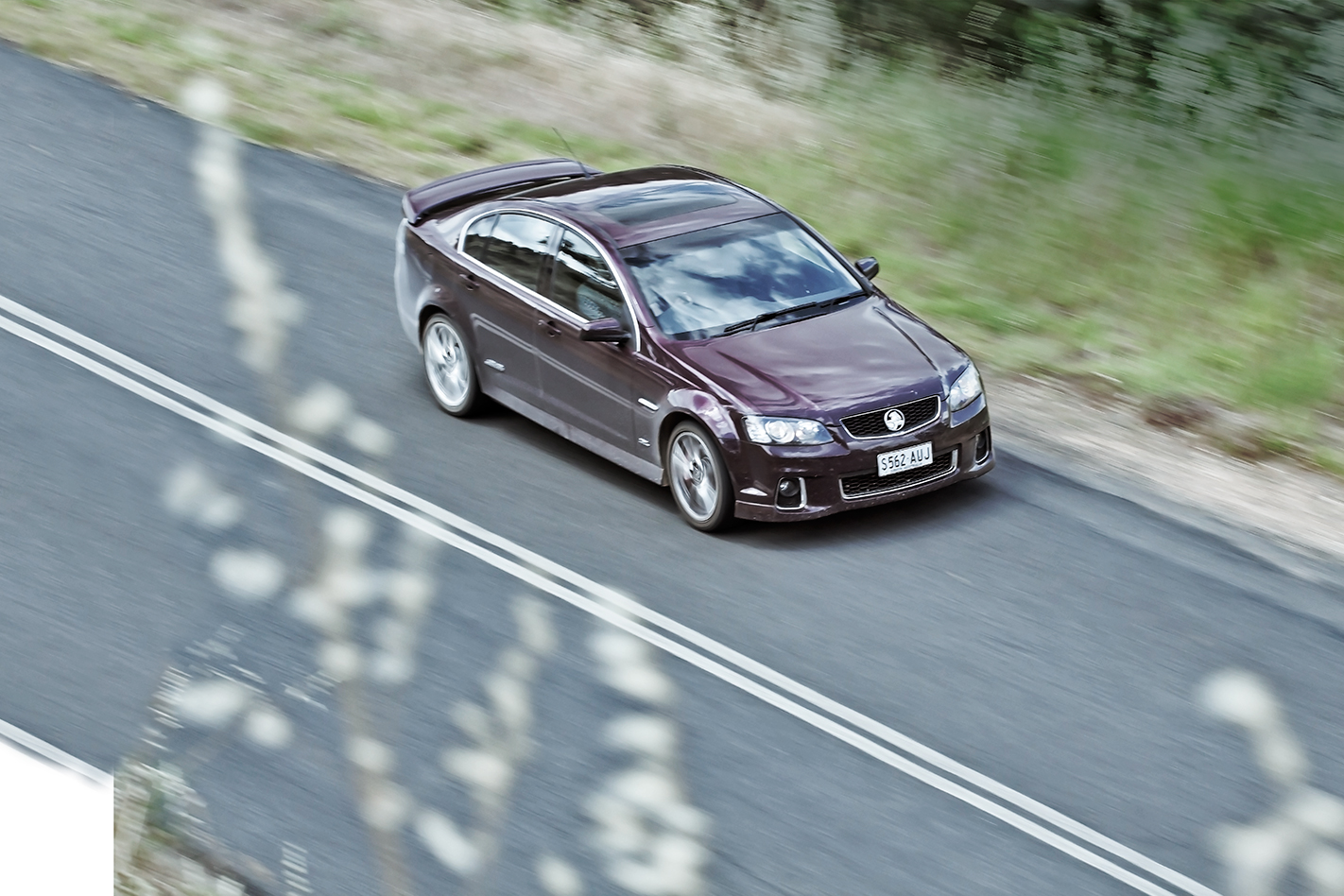 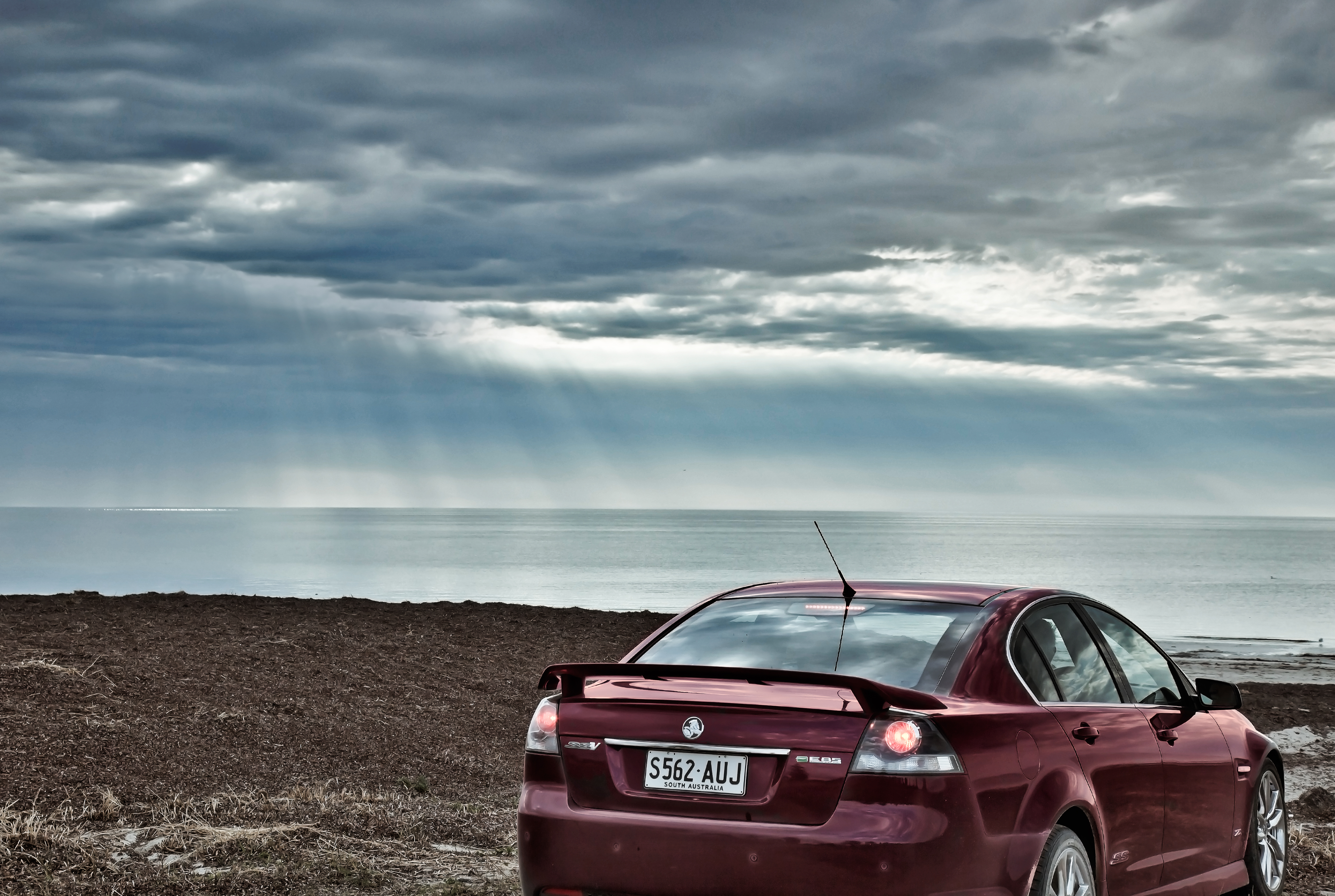 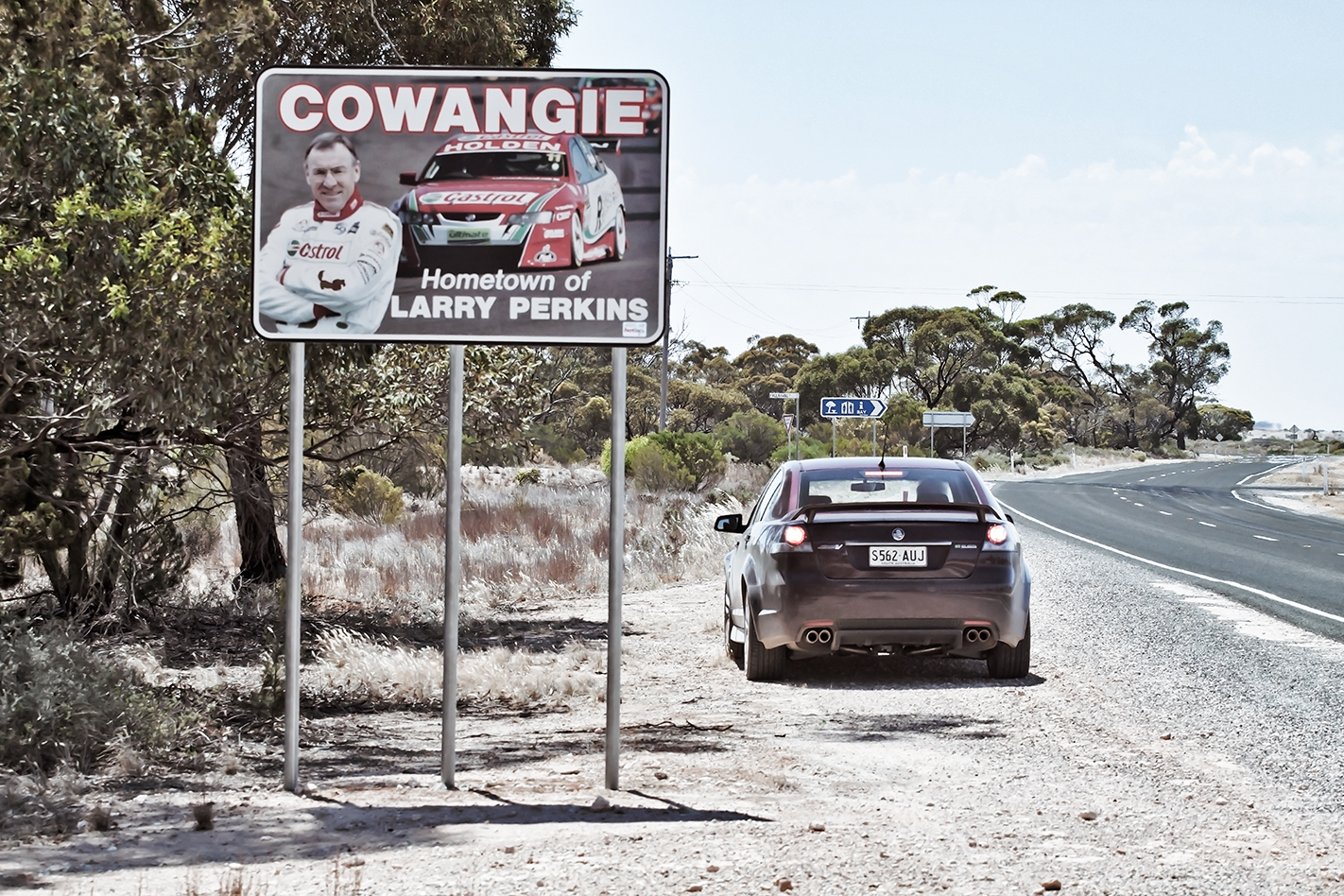 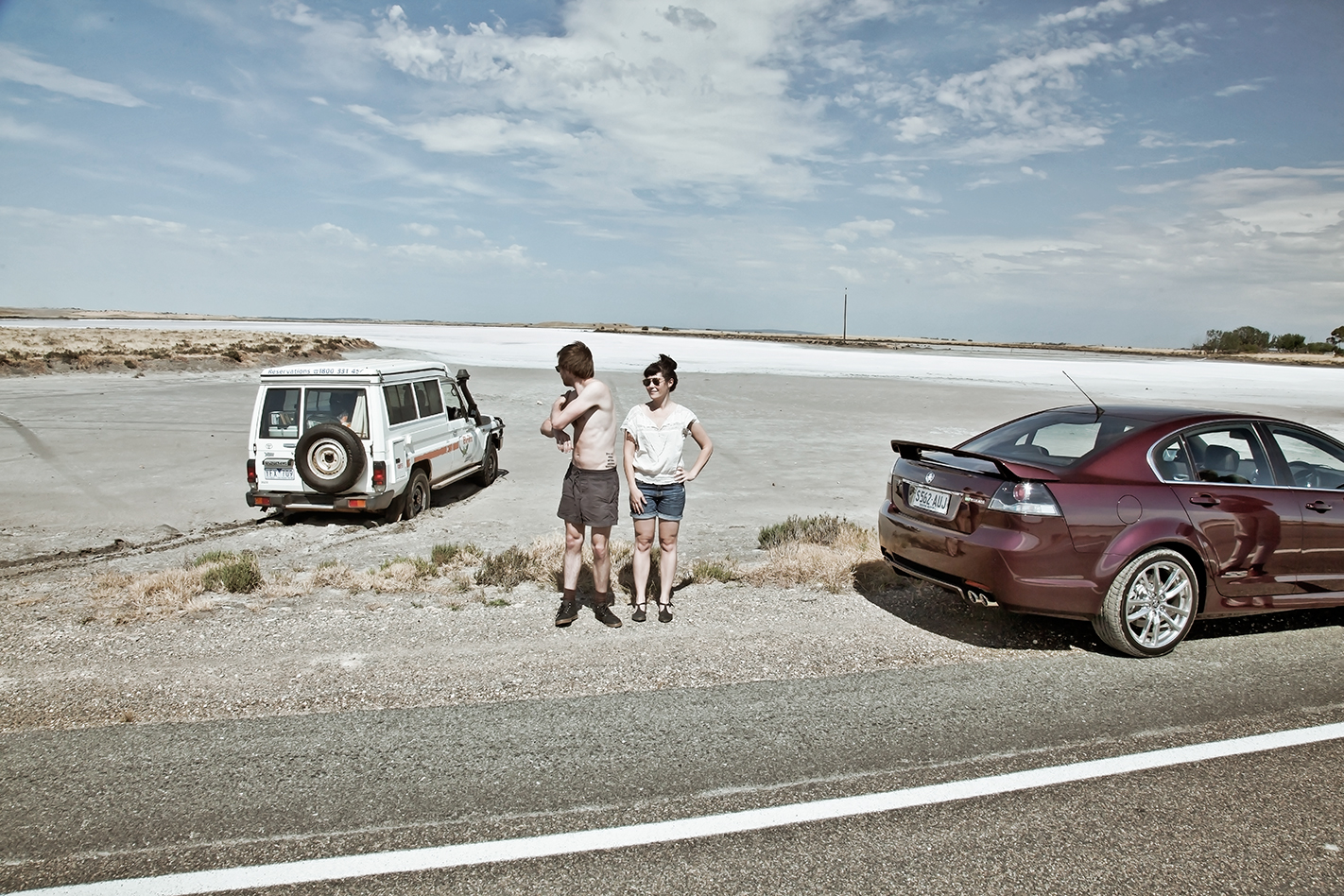 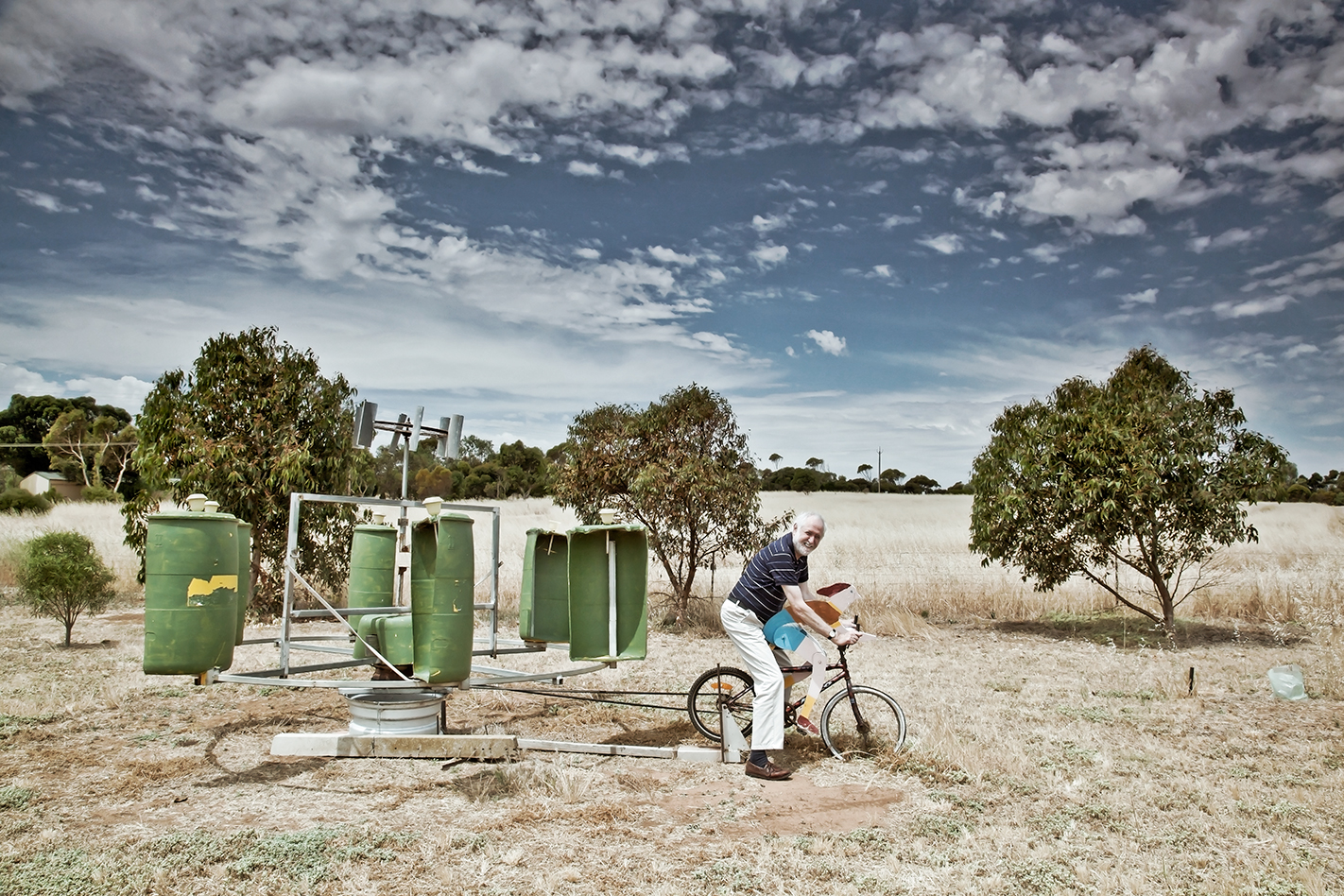