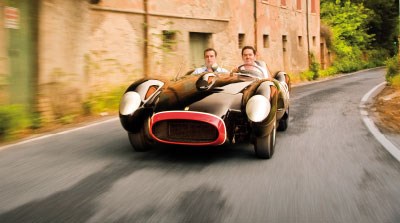 We take the world's most valuable car for a spin 48 hours before it's sold, then witness the moment it defies the global downturn.

Maybe if this was already the world's most expensive car I'd be less nervous. If I crashed it after someone had paid €9 million (A$16m) for it, a repair bill for a few hundred thousand might not seem so bad, and the new owner would probably have plenty of other cars to drive in the months it would take to painstakingly restore. But this isn't the world's most expensive car, yet. In two days' time, hundreds of millionaires and billionaires are flying in to Ferrari's headquarters to see this 1957 250 Testa Rossa go under the hammer. One of them is expected to pay more for it than any car ever sold at auction. If it happens, it will make headlines around the world. It will make the car's current owner even wealthier. This one car will make the auctioneers nearly A$1.5m in fees. And none of this will happen if I crash it. Yet here I am, driving it out through the gates of Ferrari and into insane Italian traffic.


So what might make this the world's most expensive car? The record it was expected to beat was set last year by British TV and radio presenter Chris Evans, when he paid over A$12.4m for the 1961 Ferrari 250 GT SWB California Spyder once owned by actor James Coburn. In very different times, that car made twice its estimate and had a lot of classic-car experts shaking their heads in disbelief. Nobody expects that kind of exuberance this time around. But although this particular Testa Rossa doesn't have a stellar racing history - and isn't even red - it does have everything else that can push a car's price through the roof. It's breathtakingly pretty. It's rare; just 22 were made, those that survive are owned by collectors who never plan to sell, and it has been more than a decade since one was offered at auction. Worryingly, it's exceptionally original, never having been seriously damaged. And although it's a racing car, it has two seats and is street-legal; whoever buys this car for millions will almost certainly want to use it on the road.

So how do you drive the €9 million car? Very bloody carefully, obviously. The tiny, flyweight half-doors unlatch from inside; you swing yours open, then plot how you'll slide down into the driver's seat without stumbling and denting the delicate bodywork with a flailing foot or knee, or scratching the paintwork with your watch. Once in, the view down the long bonnet is all rounded, sexy, feminine forms. There's a huge, upright, gorgeous steering wheel with broad, flat alloy spokes and a thin wooden rim, and beyond it five elegant Jaeger dials, but no speedo. In fact, you don't get much for your millions. There's no air-con, sat-nav or electric windows; just some padding to stop your knees banging against the exposed chassis tubes. The electrics and battery are in plain view in the passenger footwell, and you can see the road through the gaps in the floor.

Can you imagine going to the preview of a fine art sale, picking a Van Gogh from its stand and walking off with it down a busy street to see how it looks on the wall of your living room? No? That's effectively what I'm about to do. But it's only when you put the key in the ignition, twist it and push it in to start the 3.0-litre, 300-horsepower (224kW) V12 engine that you begin to understand why someone might want to pay this much for an odd jumble of metal, rubber and glass. A deep, rich, sonorous and very loud bellow erupts from the four conical tailpipes sprouting from the rear. The tarnished old ball of a gearknob selects first surprisingly easily for a '50s race car. There's so little space around the pedals that even driving shoes are too wide, but once in your socks they're easy to work, and the Testa Rossa moves off with a snort and a surge.

If you thought about how much it's worth, or just how catastrophic a crash would be, you'd freeze and have one. The best policy is to drive it the way it was meant to be driven, and the way the other Italian road users do: fast, but always allowing for its terrible '50s drum brakes. And it is fast; even allowing for the exaggerating effects of the roar from the exhausts and the blast of wind in your face, this remains a seriously rapid car, and the sweet, light, accurate steering and easy gearchange encourage you to drive it hard. It feels raw, lithe and alive; I've been thinking about it ever since. After a while, you forget about the value and just start to enjoy it, and enjoy the attention from onlookers who compliment your bella macchina and reach towards it with cameraphones from the pavement and passing cars. Thankfully, none was sufficiently distracted to steer into it, and we rolled back through the gates of Ferrari's famous Fiorano test track with the car unbiffed. It felt sensational to drive, but even better to hand back in one piece.

The auction weekend begins the next day with the world's greatest test drive. Some of the really serious bidders want to try the cars before they buy them; not unreasonable given how much they'll be spending. Unlike us, they'll only get to drive them in the controlled conditions of a closed test track, but it's still a pretty good way to spend an afternoon, with some of the world's most expensive cars meeting the world's richest collectors on one of the world's most famous but least accessible circuits. Even Enzo Ferrari's son Piero drops by, in dark shades and flanked by minders. Some of the buyers are easy to spot via their fat watches and thin third wives with fake boobs and real tans. But most go virtually incognito; you'd never guess that they had millions to blow on a car.

The sale is held in a vast, futuristic-looking silver hangar built by the side of the track to house the Ferrari F1 team's transporters. Today there are 800 seats inside facing the auctioneer's podium and the stage; all the seats are taken, and the rest of the hall is packed. We spot some of the serious bidders from yesterday's test session; you'd struggle to tell them apart from the ordinary millionaires, and some hang around the back of the hall, ready to make their bids as subtly as possible.

Englishman Peter Bainbridge takes the podium for the main auction. He is not, by his own admission, a car expert. But he is a sensational auctioneer. In any other business it might take a team of lawyers months to close a €9 million deal. Bainbridge will do it in minutes. He has some help; a team of spotters scan the 800 seats and the crowd packed in behind them for subtle bids and shout them back to Bainbridge. He brings his massive, commanding presence, and the ability to talk for up to eight hours without needing to pee. His tricks? Drink only milk and honey for the voice, and if it's too hot, do it trouserless behind the podium.

"Oh, there's lots going on alright," he says before the sale starts. "There's the seller, the guy we know wants to buy, the opportunist bidder, and the guy who needs his attention drawn to it, who's going to bid but just doesn't know it yet. Yeah, they all have nerves, it's great. But I want them to be comfortable, and I have no compunction asking them to confirm a bid. And I'm not going to sell you a car just because you've raised an eyebrow. Not unless I know you very well already, anyway."

But does he feel nervous at the idea of selling the world's most expensive car? "There's no pressure from the fact that the car might break the record. The pressure is on from the start simply to conduct the sale properly, to keep the right pace, and keep everything clear. If we get the record it should guarantee champagne ... later."

But when the auction starts, just getting the cars sold is an achievement. The first few all sell, but most go for the lower end of their estimate, and some for considerably less. Lot 13 is a 1962 California almost identical to the car Chris Evans paid A$12.4m for last year. With a guide price of between A$7.6m and A$9.7m this year, the bidding struggles up to just A$7.1m, and it doesn't sell. It's the first of five that fail to meet their reserve, including the Maserati 250F in which Sir Stirling Moss won the 1956 Monaco Grand Prix. If that car can't meet an estimate of just A$3m, what chance does the Testa Rossa have of breaking the world record in a time of global economic gloom?

"It's terrible in there," one Russian bidder tells us. "It's very, very slow. The big cars just aren't selling." Has he bought anything? "Yes." What? "Two Ferraris." Okay. Thanks.

The Testa Rossa is the last lot. It roars up onto the stage, and for the first time there is near silence in the hall as the bidding starts. I have the brilliant idea of putting in an early offer, just so I could say I'd bid on the world's most expensive car. But when the screens flash up that it's being sold with no reserve, and having seen how cheaply some of the other cars have sold for, there is the distinct possibility that I'd ruin the auction not by crashing the star lot, but by making a bid that nobody would beat - and I couldn't hope to honour.

But I'd have got away with it. There are three bidders in the room and one on the phone; the price leaps by a million with each bid. At €8m (A$14.1m) it breaks the record to cheers and applause. The action then slows sharply; there's an extra A$177,000, then another A$133,000. For a while that looks to be enough, before the phone bidder, an American agent bidding on behalf of an anonymous client, offers another A$44,184; A$14.5m in total, A$16m when you add the buyer's premium. The final bidder in the room must be in pain. He can't match this; he shakes his head, the hammer comes down ... and he's lost the world's most expensive car for the price of an SS Commodore Ute. 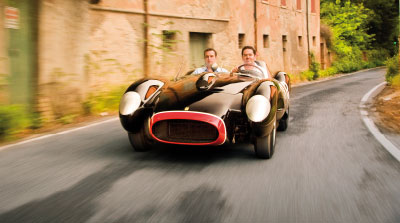 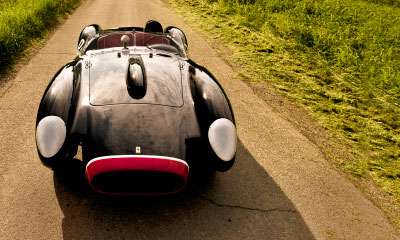 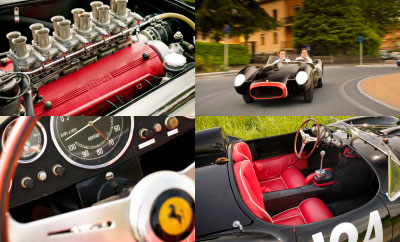 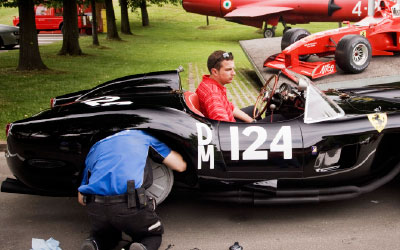