NO, THIS isn’t the full-fat American Ford F150 Raptor, but it’s the closest thing to it that you’ll be able to buy from your local Ford dealer very soon – the Ranger Raptor. The idea is pretty simple: Take the off-road racing DNA from the big F150 and apply it to the smaller, Thai-built Ford Ranger that is currently one of the most popular dual-cab utes on sale in Australia. The execution is far more complex, with the new Ranger Raptor sharing very few mechanical components with the donor vehicle. For starters, the engine is brand spanking new. No, it’s not the twin-turbo V6 out of the F150; sure, that would have made the Ranger an absolute rocket ship, but also extremely costly to develop and ultimately buy. Instead, it’s powered by a new twin-turbo 2.0-litre diesel donk that produces 157kW and 500Nm. That makes it marginally more powerful than the existing 3.2-litre five-cylinder diesel; however, Ford claims the new 10-speed automatic, adapted from the F150 Raptor, really extracts the best from the motor thanks to its broad spread of ratios. The twin-turbo set-up, featuring one small high-pressure turbo for low-end grunt and one big low-pressure turbo for high-end power, is also said to give the car significantly more punch than the 3.2-litre. 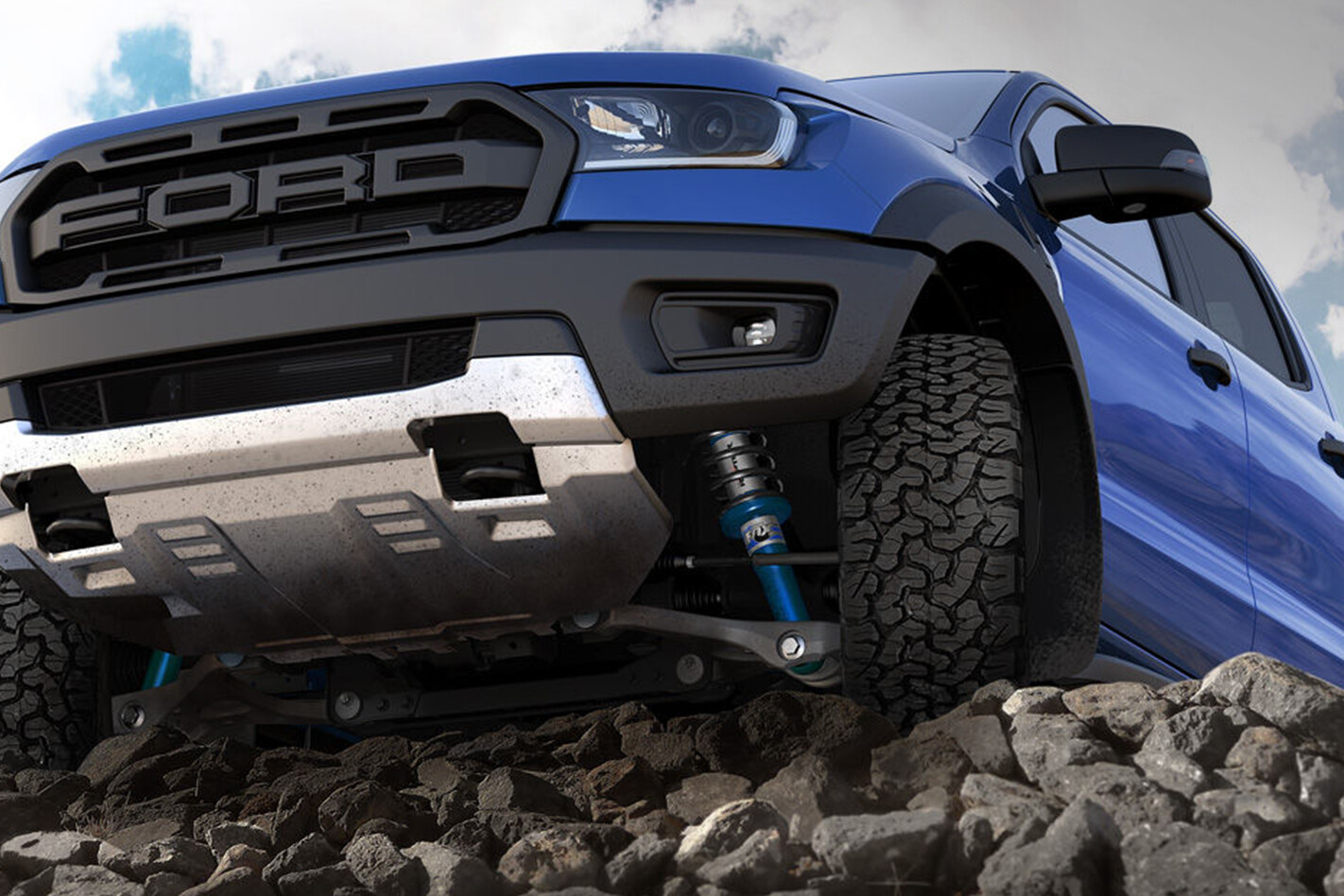 But the most important part of that Raptor DNA is the off-road racing-inspired suspension design. For starters, the Raptor ditches the Ranger’s leaf-spring rear end for a coil spring and Watt’s link set-up similar to what you’ll find in the Everest SUV. However, in the Raptor the springs sit further outbound, negating the need for an anti-roll bar. 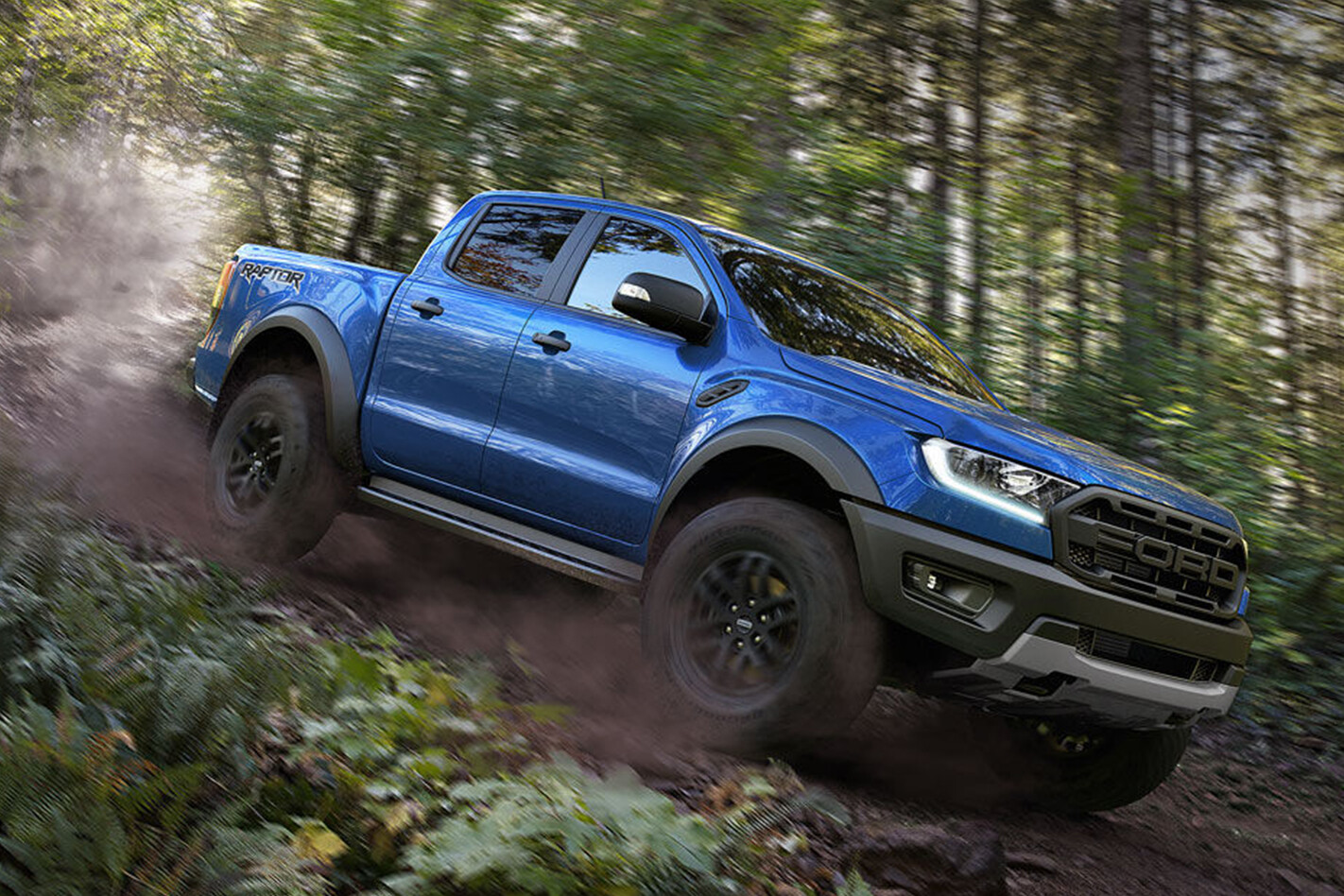 The result is a car that rides 50mm higher than an ordinary Ranger, with tracks that are 1710mm at either end – up from 1560mm on a standard Ranger. To compensate, Ford has fitted a new wider front end, incorporating some of the design elements from the F150 Raptor such as the ‘F-O-R-D’ grille and steel/plastic lower front bumper. The company has also given it wider wheelarch flares as well as extra cladding underneath for protection from rocks and other off-road obstacles. The rear tray has also been made much wider to accommodate the increased track width. The rear bumper now incorporates a pair of tow hooks that are rated at 3.8 tonnes; however, the rated towing capacity of the actual towbar is now 2500kg, 1000kg less than a standard Ranger. 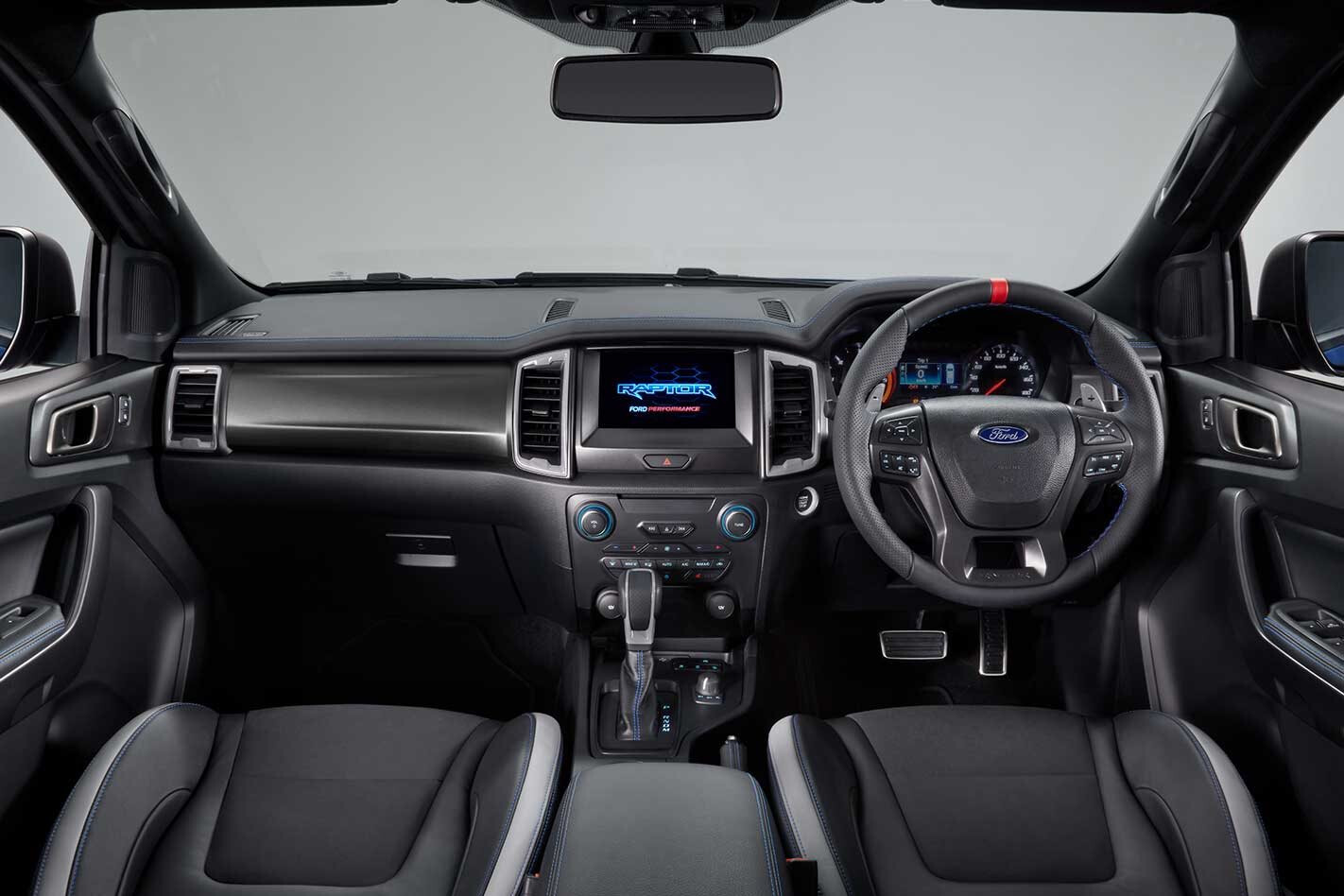 Inside, the Raptor cops a couple of upgrades over the high-spec Ranger, including racier seats, steering wheel, and paddle shifters for the 10-speed auto. It also gains the terrain selector feature from the Everest with an added Baja performance mode, just like the F150 Raptor. The Raptor is expected to go on sale in the middle of the year, and an early ride-along in a prototype by our mates at 4X4 Australia mag suggests it’ll be a bloody cool thing.