Everything we know about the Ford Ranger Raptor

Ford’s roided-up Ranger is imminent, with a February 7 reveal just around the corner. Here’s what we currently know about the Blue Oval’s hot utility.

TRADIES, start salivating. The top-dog Ford Ranger Raptor is just around the corner and Ford is in the process of prepping for its global unveiling on February 7 in Thailand, where the covers will be finally lifted from its muscular form.

So far all we’ve seen of the heavily-modified commercial ute is some camouflaged prototypes doing circle work in teaser videos, but there are already enough nuggets of info floating around for us to get a fairly clear picture about Ford’s brawniest Ranger. Here’s what we know: 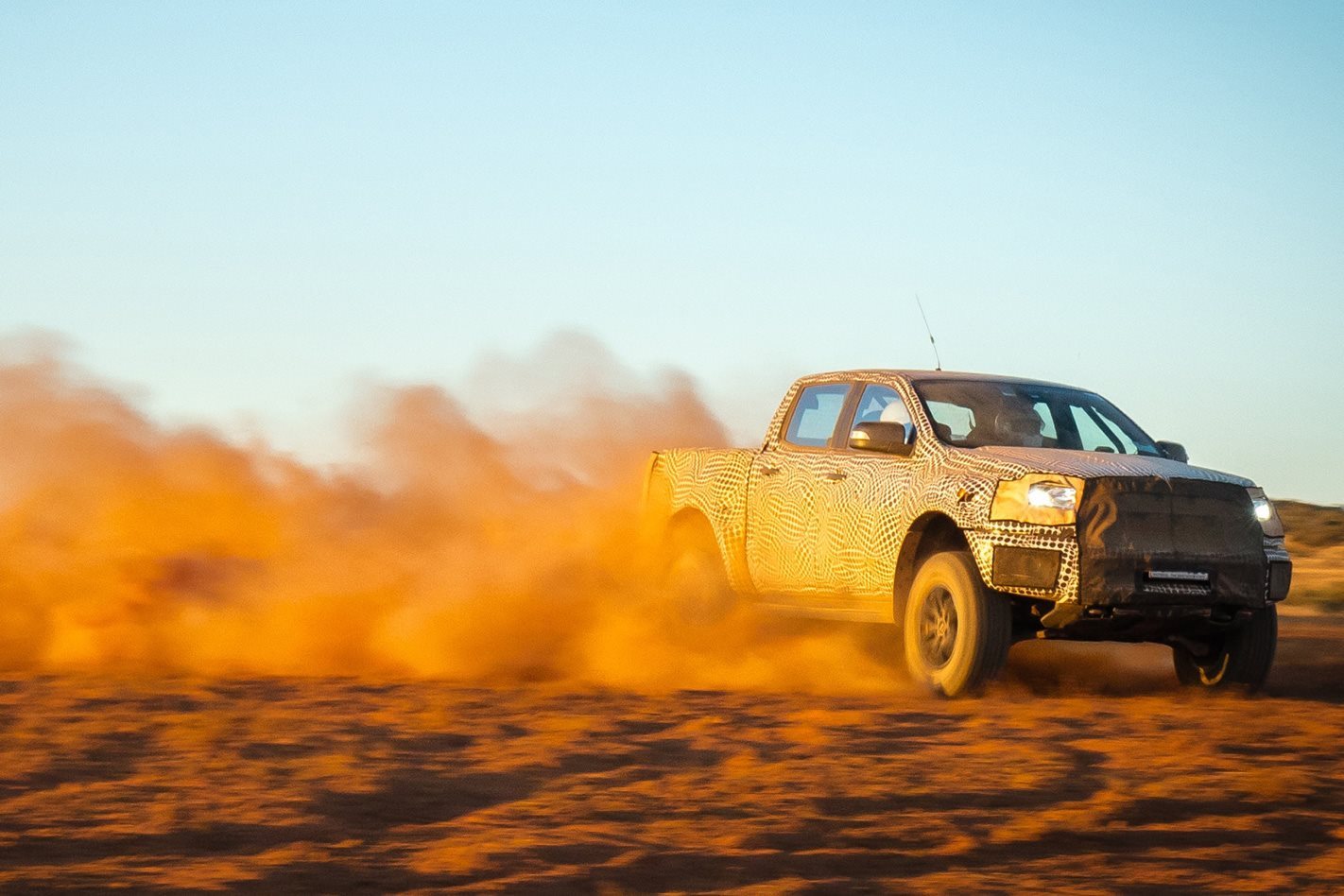 We’re not talking about a thin smear of Revlon here – judging by the appearance of prototype vehicles, the Ranger Raptor will wear some serious war paint in the form of bulging stick-on wheelarches on top of wider sheetmetal. Bumpers will be cut high and tight to improve approach and departure angles, while under-body cladding is likely too.

Butch styling will likely have some impact on the Raptor’s  utility as well, with the rear wheel tubs potentially needing to be widened to accommodate the wider off-road rubber. Will owners care that they can no longer slide an ISO pallet between the humps of their Ranger? Unlikely. 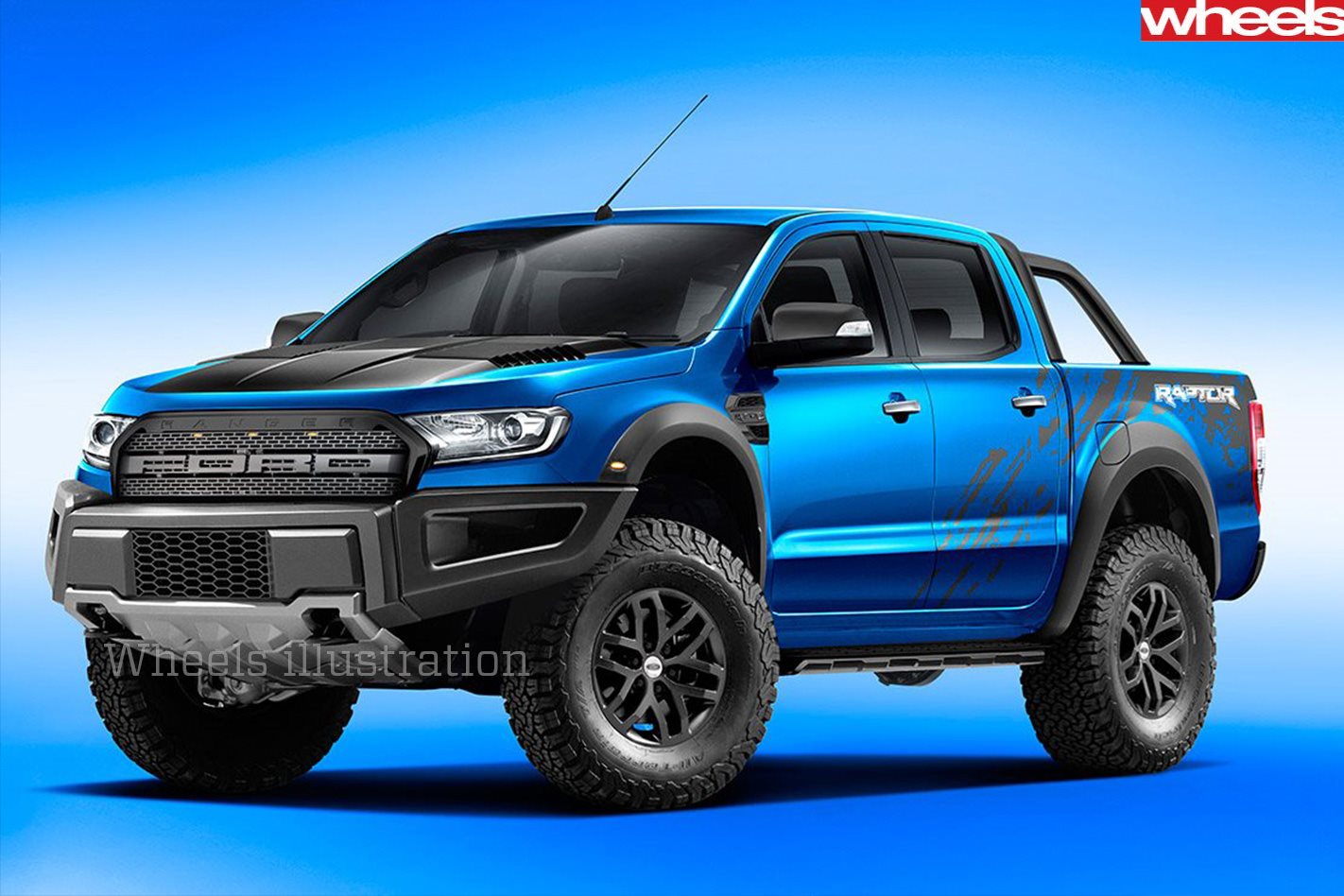 As for bodystyles, don’t get your hopes up for a single-cab option. Raptor will probably be a dual-cab-only proposition.

Expect some aesthetic inspiration from the bigger F-150 Raptor, with features like a prominent FORD script across a blacked-out grille (something current Ranger owners have been applying to their utes for years now thanks to the aftermarket), and a unique tailgate treatment. This thing should look tougher than a tatted-up bodybuilder.

Our American cousins will receive a twin-turbocharged petrol V6 EcoBoost engine borrowed from the head-kicking F-150 Raptor, but Oz-delivered (and Thai-made) Ranger Raptors will be motivated by something very different: a 2.0-litre turbodiesel four-pot. That may sound like a downgrade – especially considering the current Ranger receives a ballsy 3.2-litre inline five turbo-diesel with 147kW and 470Nm – however power and torque outputs are still unknown and expected to at least equal, if not exceed, those of the bigger 3.2L. 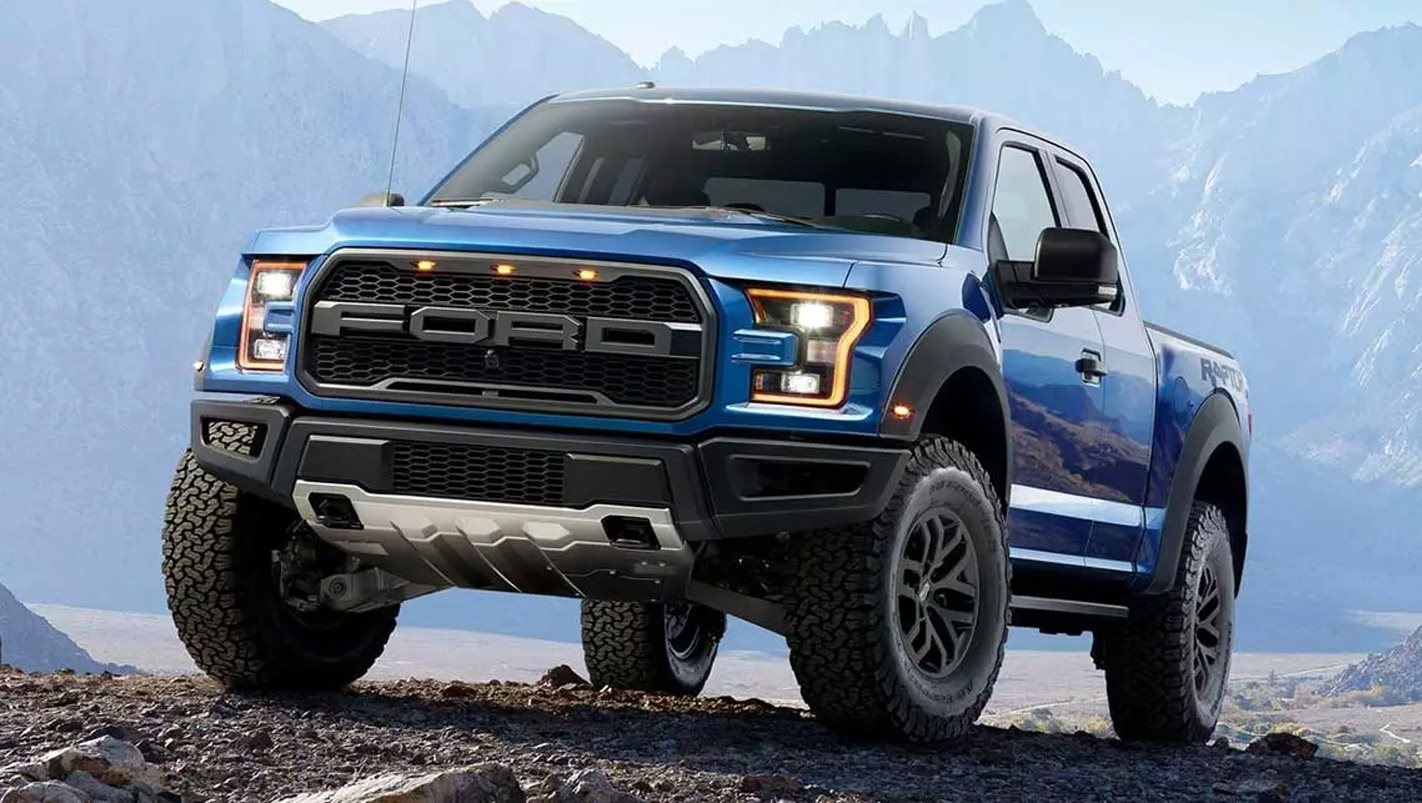 Bolted to the back of that four-pot is expected to be a 10-speed automatic, a transmission jointly developed by Ford and General Motors and one that’s also in use by serious machines like the Camaro ZL1 and Ford F-150 Raptor.

Will it still have a low-range transfer case given that huge spread of ratios? The F-150 Raptor does, and it also features a wet-clutch transfer case that can vary the front-rear torque split on the fly – giving it AWD as well as 4WD attributes. Clever, but it’s not known whether the Ranger Raptor will boast the same capability.

Don’t expect to see a regular Ranger rear-end when you peek under the Raptor’s rump. Rather than leaf springs, the Raptor is believed to take the coil-sprung live axle rear of the Ford Everest – with a Watts linkage to improve handling – and equip it with springs and dampers suited to hard-core off-roading. A Thai-market hype video recently released online describes the Ranger Raptor as “ready for jumps”, which should give you a pretty good idea about what this rig is engineered for. 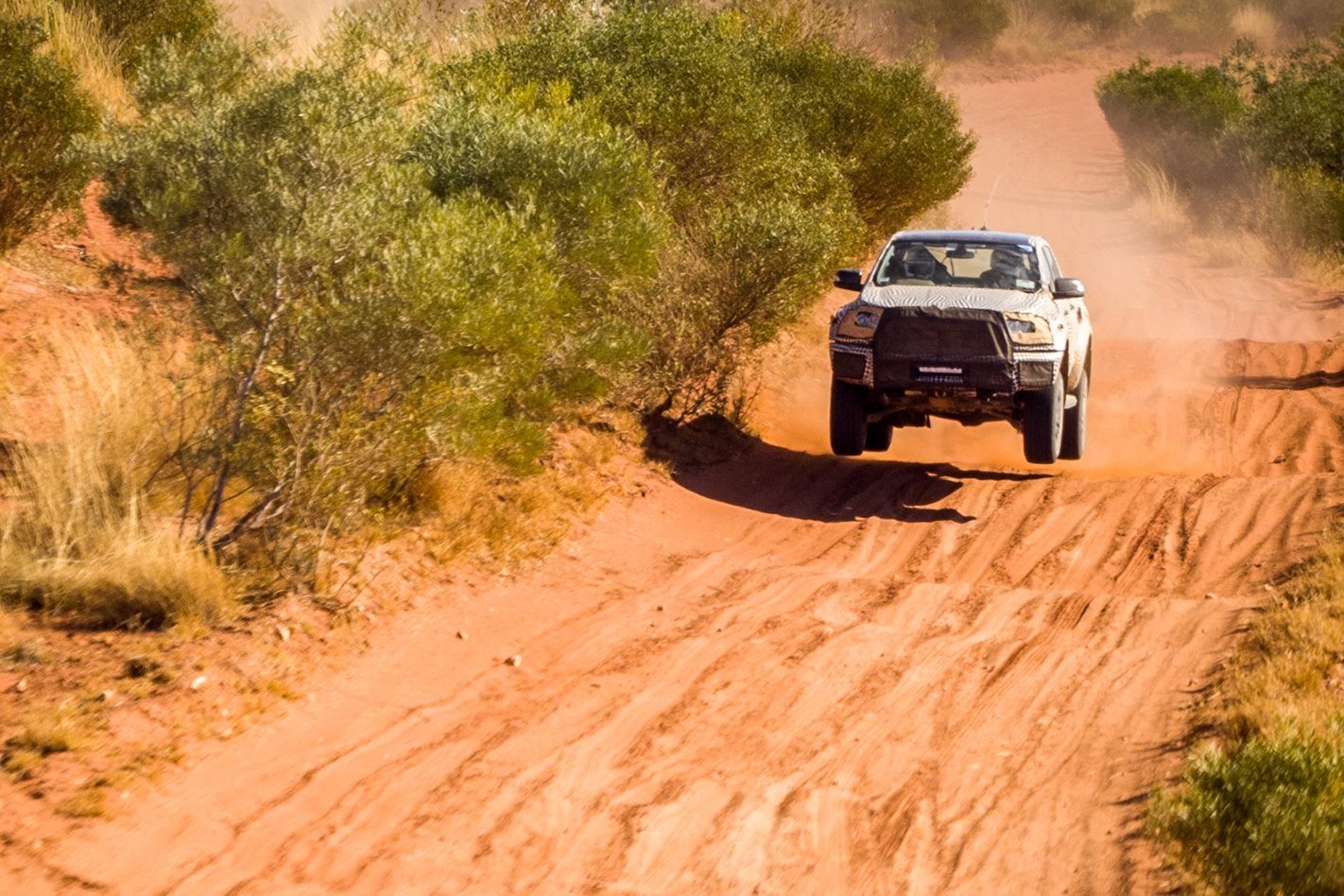 Track width and tyre tread will be wider to improve stability (as well as fill out those muscular guards) while a taller ride height is a no-brainer. Disc brakes on the rear axle, rather than just the front, will help slow the beast.

WHEN, AND HOW MUCH

The Ranger Raptor’s official debut is set to happen on February 7 in Thailand, with a local on-sale date potentially as early as mid-year. As for the price, with the current top-spec Ranger Wildtrak retailing for a smidge under $60K we’re anticipating the hard core Ranger Raptor will blast into Ford showrooms with a circa-$80K sticker. 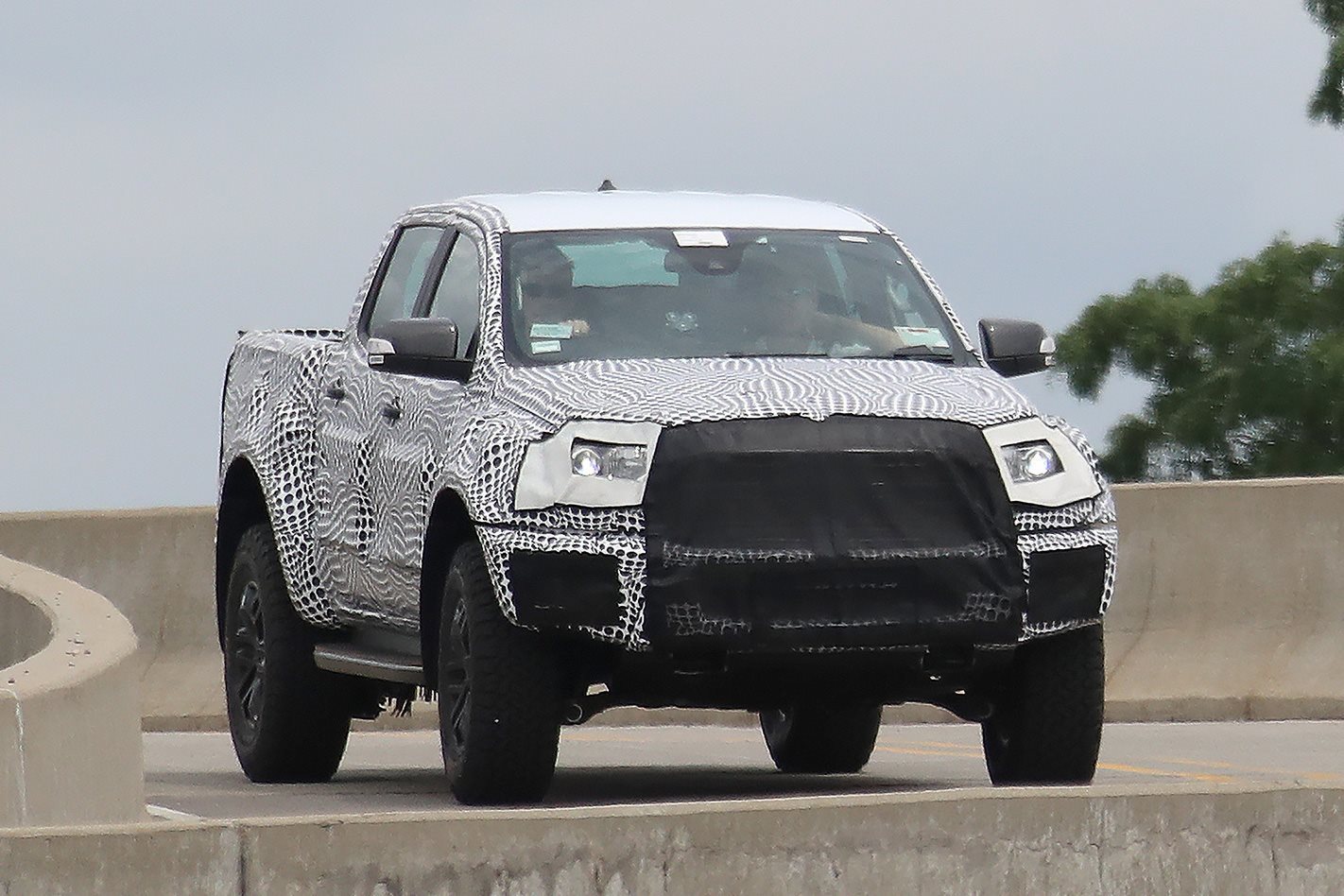