PORSCHE has provided a teaser of what’s believed to be the pre-production form of its Mission E electric grand tourer, hidden inside an annual report outlining its environmental performance in 2017.

The images reveal that the leap from concept to reality will soften some of the visual wow factor that made Porsche’s concept car such a heart-stopper at its unveiling at the 2015 Frankfurt Motor Show. Not all is lost, though; while the Mission E’s passenger cell loses the rear suicide doors and replaces them with more conventionally hung ones that erode some of the shapely 911 quarters of the concept’s rear, around the front looks on point, right down to the aerodynamic form that bends into the headlight assembly.

We gain a good look at the ‘frunk’, the small 911-esque storage well in the nose of the Mission E that fills part of the void where an engine would usually sit. We also note that the broad-hipped Mission E will have a decent-sized boot, although it doesn’t look very deep. The wheels still push out to the corners, giving an impression the passenger cell is hung between them. 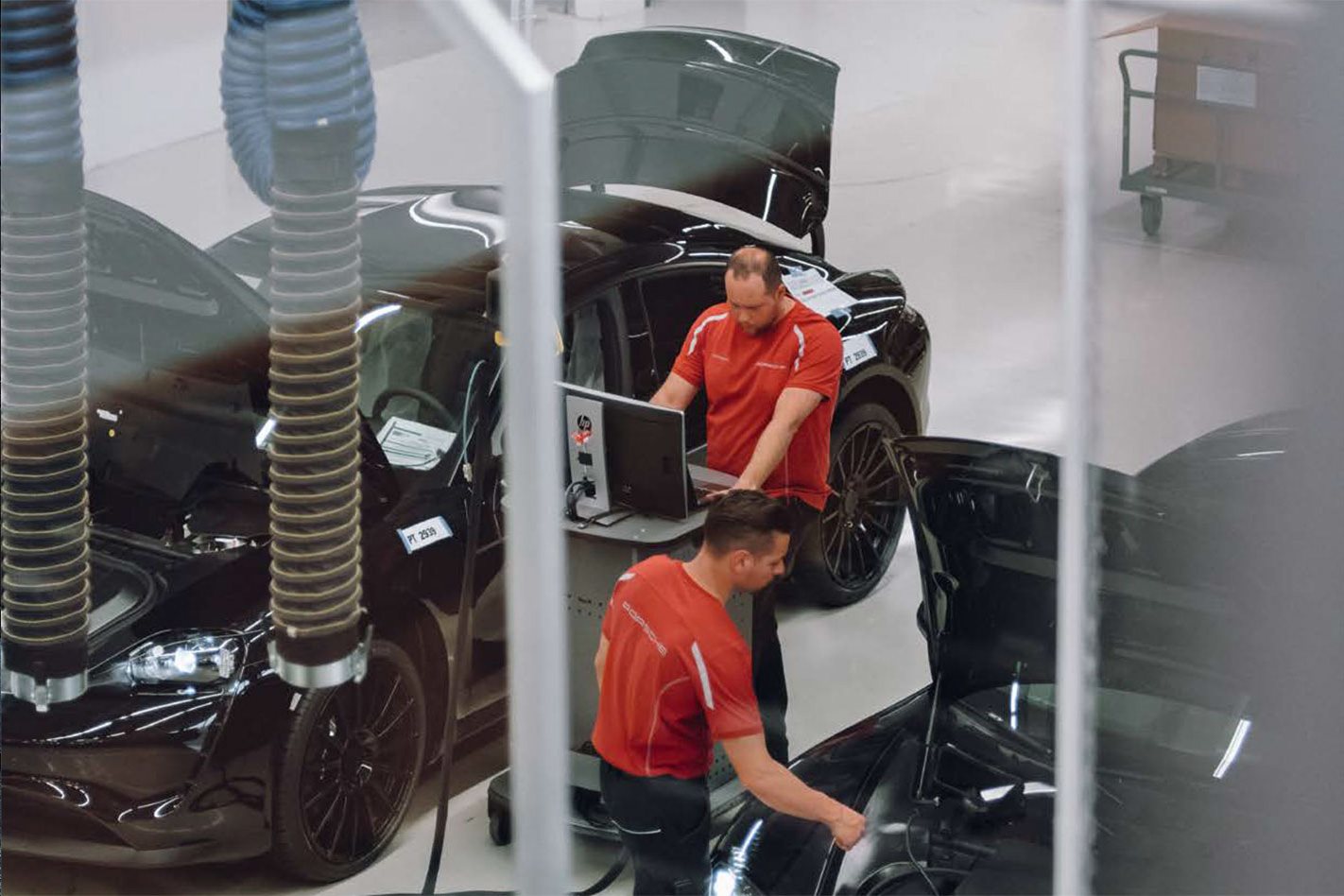 On the technical front, it is clear from the stripped-down monocoque that the production Mission E will adopt a modular drive system as per concept renderings, with one motor at the front and another at the rear, providing all-wheel drive. The roof appears to feature a subtle depression down its centre, carried from the concept car. An aerodynamic slot on the guard behind the front wheel, which is likely to help with drag reduction, seems to have made the cut, too.

There’s a single image that shows the driver’s seat of the Mission E, but we can’t divine very much. In the accompanying text explaining some of the inspiration behind the Mission E, designer Matthias Kulla said they have been able to “lower the base of the [Mission E’s] windscreen like the Lamborghini Miura”. The classic Italian supercar’s windscreen finished below the line of the front guards and the instrument panel did away with extraneous items above the gauges to present an unimpeded view forward. “The car [the Miura] was only 1.03 metres high, but you still looked out onto the bonnet,” Kulla said. “That was sensational. That changes your perception of the surroundings, they come into the car.”

The Mission E will use a Tesla-like flat battery pack that allows the heaviest part of the electric powertrain to sit low, keeping the centre of gravity as close to the ground as possible. 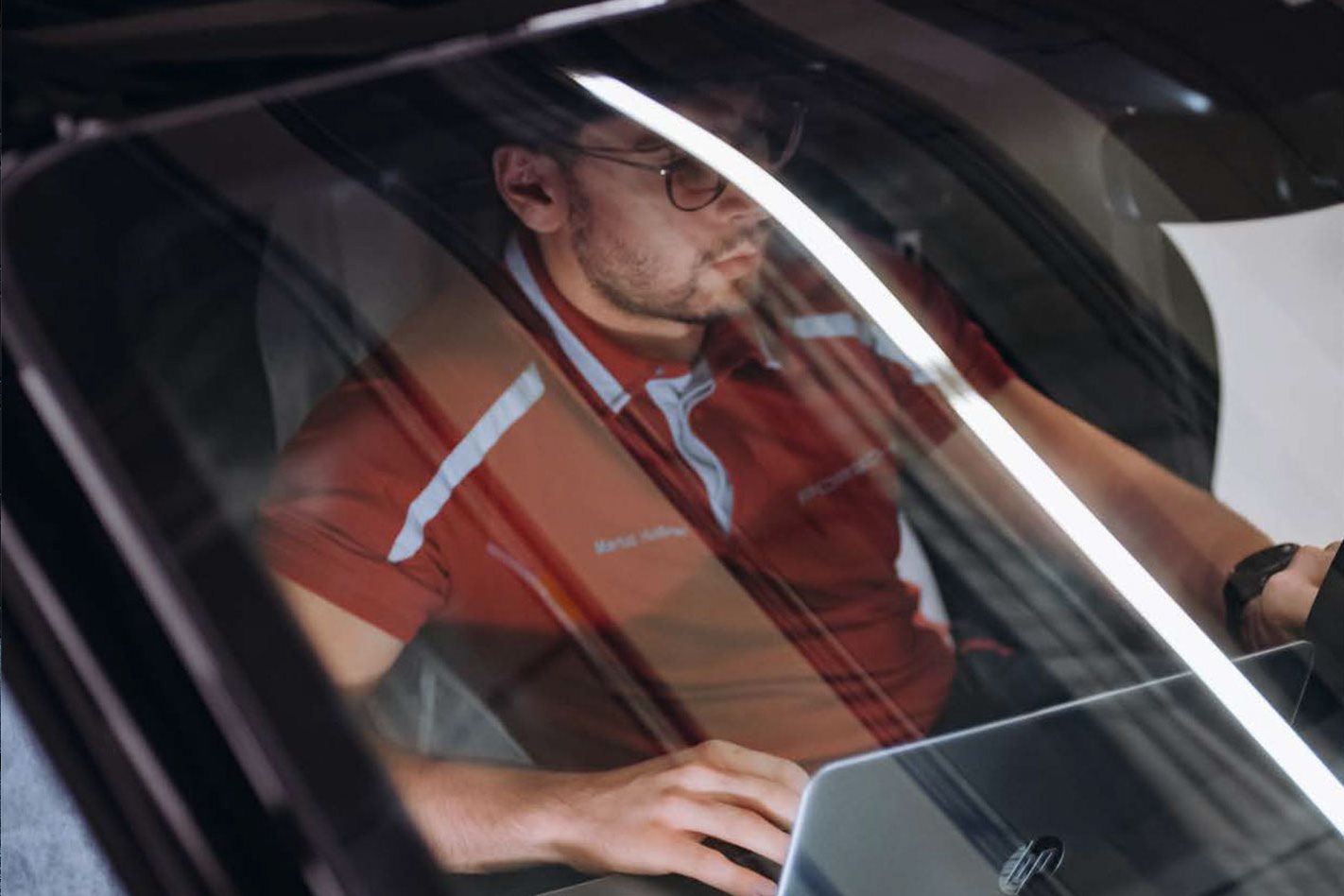 Porsche plans to launch the production version of the Mission E next year, featuring a 440kW-plus performance punch capable of launching the four-door coupe from 0-100km/h in less than 3.5 seconds. That’s a pretty modest benchmark; the twin-motor Tesla P100D will tick off the same sprint in 2.7sec. Porsche also claims its first electric car will drive more than 500 kilometres on a single charge, and when depleted, the batteries will recharge to 80 percent in less than 15 minutes.

Porsche chief executive Oliver Blume, quoted in the report, said the Mission E would “redefine the high-performance e-vehicle segment”. “The vehicle will be a trailblazer for the mass appeal of e-vehicles,” he said. “The only things that the Mission E will not offer are boredom and forbearance.”

“I can promise that the Mission E will be the sportiest and the most technologically advanced vehicle in its class,” Blume said. “E-mobility, Porsche performance and driving enjoyment are not mutually exclusive; for us, they all belong together.”