Porsche’s technological flagship is a tree-hugging heavyweight that hits hard, but treads lightly

The pinnacle of the Porsche Panamera range, the Turbo S E-Hybrid merges the company’s muscular turbo V8 with a sizable battery and electric motor. It’s big, it’s heavy, but it’s the fastest four-door Porsche you can buy today. Not only that, thanks to a plug-in capability it can also take you to work and back without drinking any juice at all.

WHY WE'RE TESTING IT?

This is what Porsche reckons a fast – yet frugal - luxury four-door should be, so of course we need to put it to the test. Can it balance the conflicting needs of comfort, performance and environmental friendliness? Given the mammoth $460,100 outlay required to put on in your driveway, you’d certainly hope so. 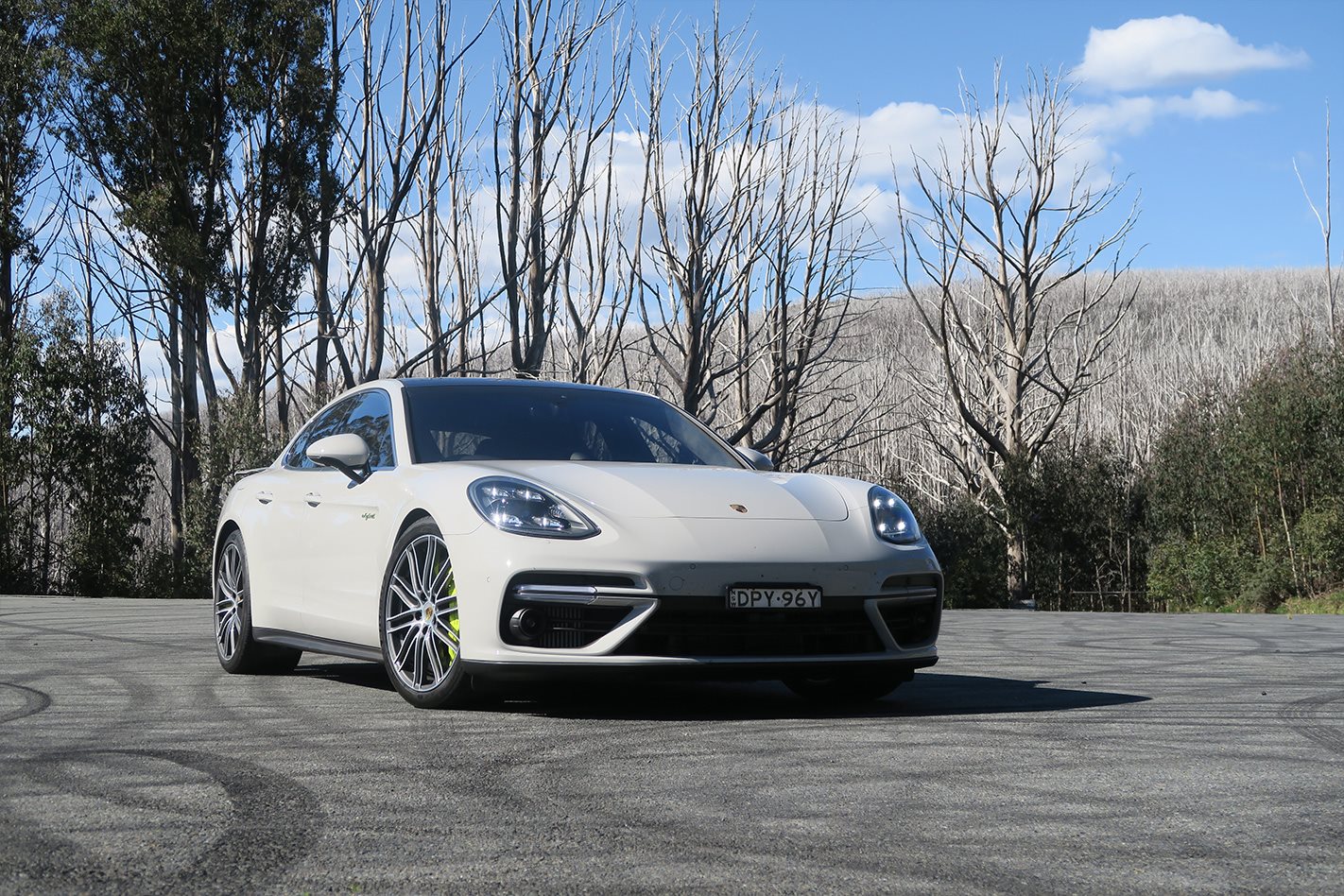 It’s impossible not to be impressed by the Panamera Turbo S E-Hybrid.The technology on board represents the best of what Porsche can achieve, and the virtually seamless integration of its electric powertrain with its brawny turbo V8 is a triumph of engineering.

It’s capable of eye-widening speed and handles like a car several sizes smaller, yet has an opulent cabin with room for four to sprawl in great comfort. Couple that with Porsche’s typically meticulous build quality, and the Panamera Turbo S E-Hybrid is easily the ultimate do-it-all CEO chariot. 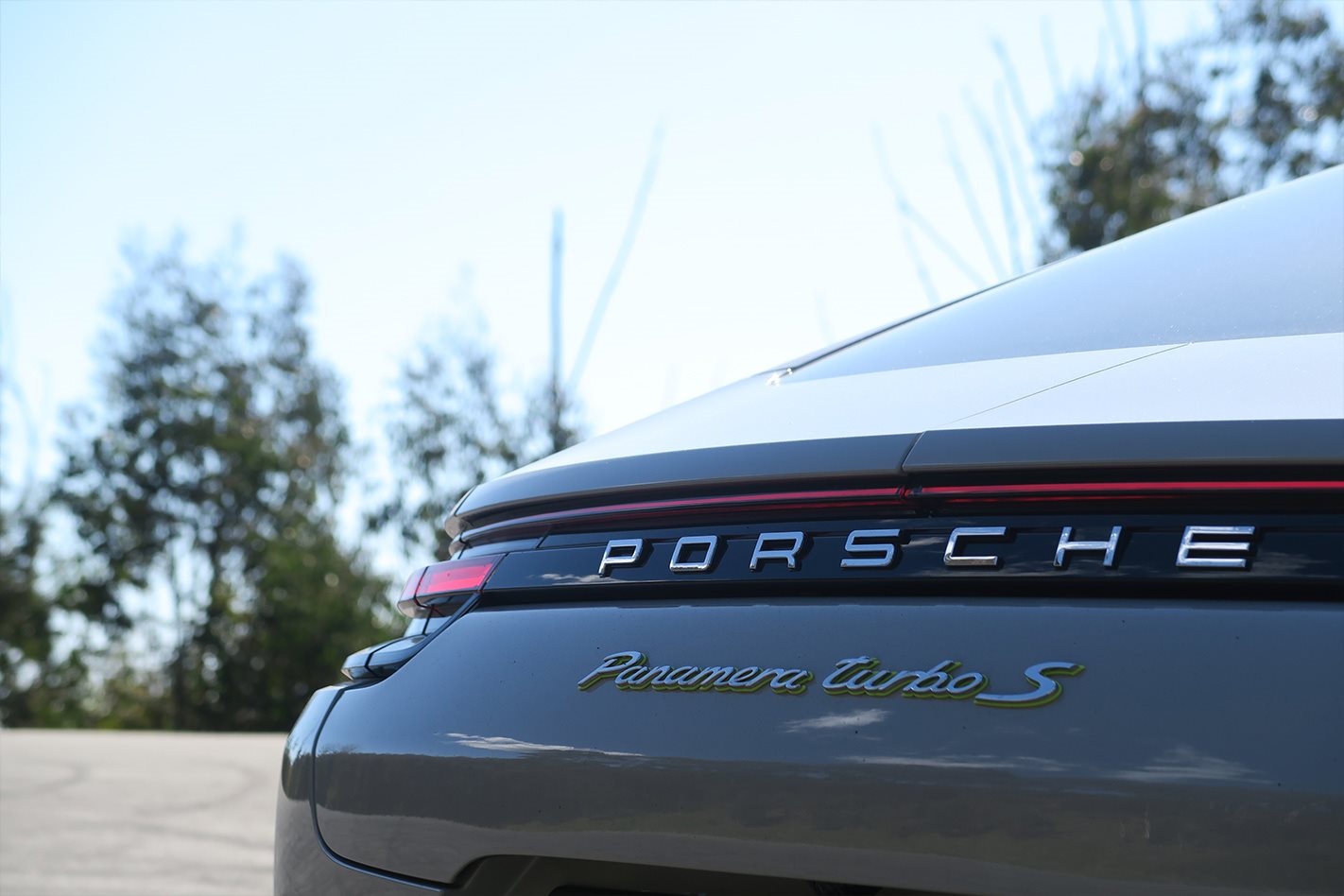 Plus: Incredible thrust; grips the road like a much lighter car; opulent interior; ride comfort

Minus: Needless complexity in some features; extremely heavy and feels it too; huge price premium over Panamera Turbo

THERE are flagships, and then there’s the Porsche Panamera Turbo S E-Hybrid. In true range-topper fashion it’s more opulent than a Russian oligarch’s yacht, and in true Porsche fashion it’s incredibly fast. Monumentally fast, in fact.

But it’s more than that. The Turbo S E-Hybrid is also equal parts technology showpiece and eco-statement for the Weissach brand. Packed to the roof rails with tech, it’s also capable of being driven for a full day’s commute without ever waking up its potent twin-turbocharged V8.

Something for everyone? That’s the idea – as long as ‘everyone’ can stump up the $460K price of entry. 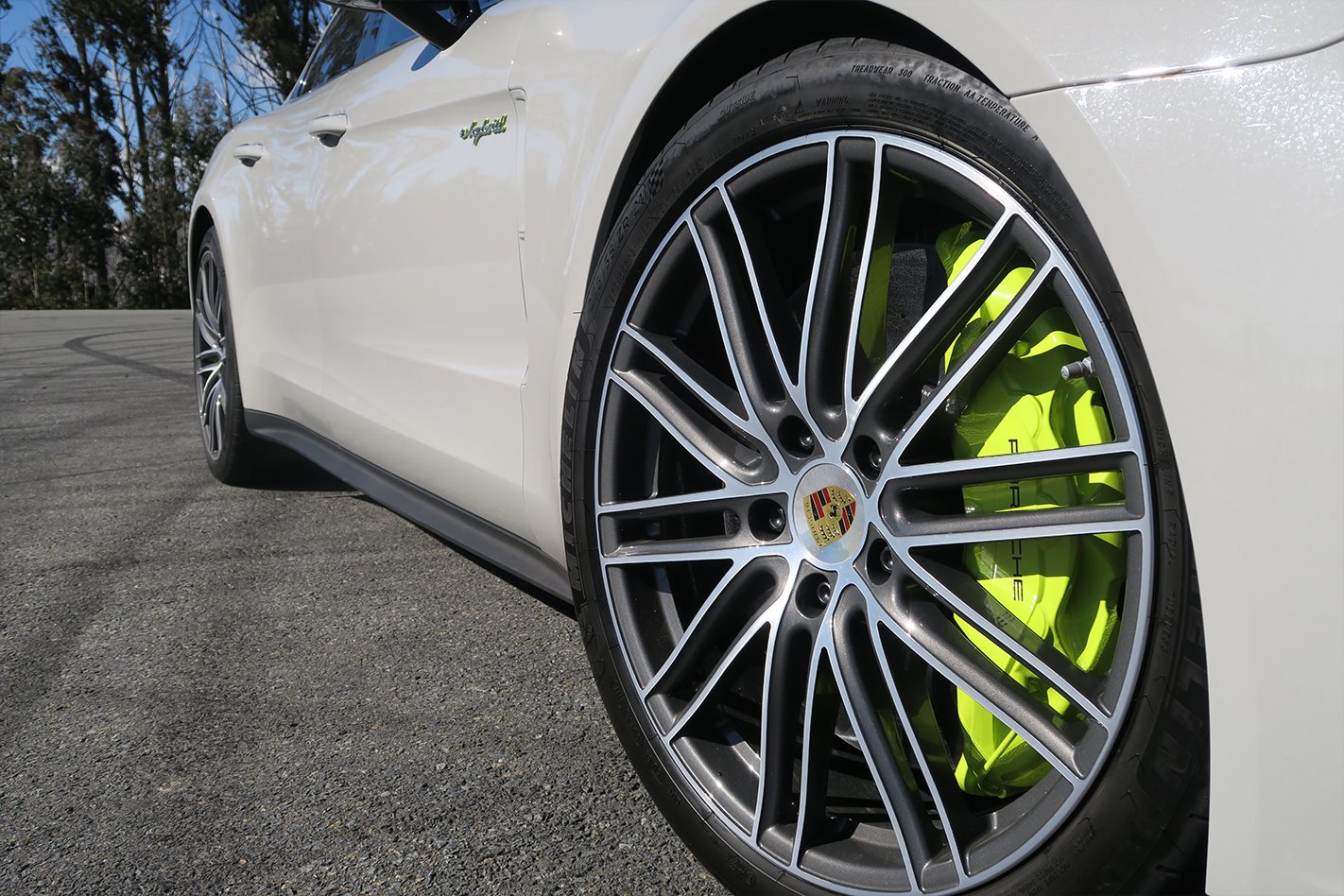 The Turbo S E-Hybrid is easy to spot in traffic. The lurid Acid Green of the monstrous ten-piston brake calipers are matched with the same hue ringing its exterior badging, and like flouro gym gear the activewear accents seem fitting for what is undoubtedly the most athletic Panamera.

And that second set of numbers gives the most hedonistic Panamera a bit of a treehugger quality. The Turbo S E-Hybrid totes a 14kWh lithium-ion battery pack, and though it weighs 2.3 tonnes all of that torque makes it more than able to keep up – and ahead – of commuter traffic. Top speed in all-electric mode is a licence-busting 140km/h and peak range is a generous 50-ish kilometres before the battery is depleted.

Most Aussies would easily complete a day’s commute to and from their workplace on a single charge, while juicing up the battery from a regular wall outlet takes around eight hours. Make the most of that EV capability, and running costs should be a tiny fraction of what most CEO-grade uber-sedans require. 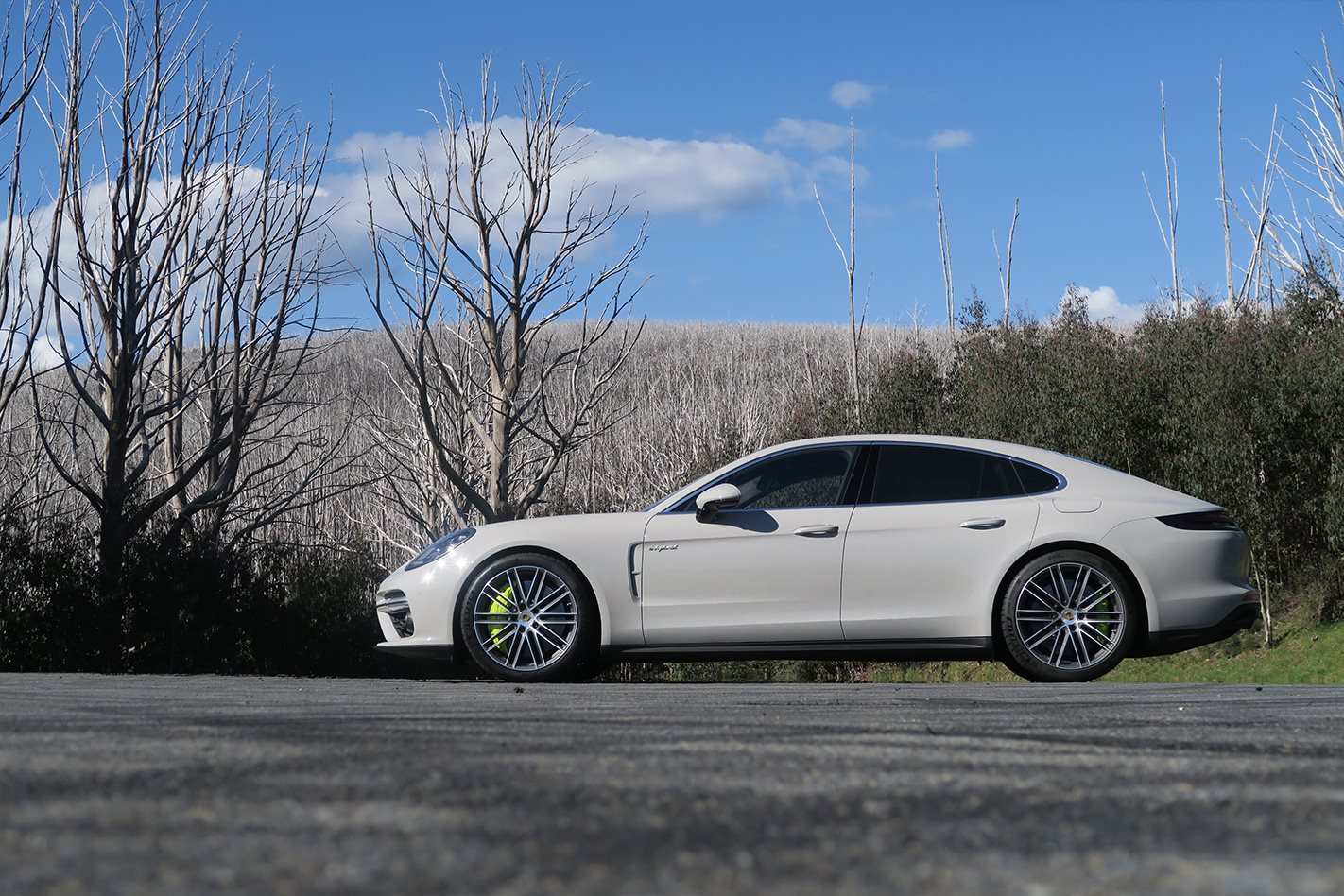 And that’s what we set out to do: replicate the driving behaviour of well-heeled types who must endure the weekday schlep from their leafy suburb to their CBD corner office, but who also savour a trip to the twisties on the weekend.

On the commute, the Turbo S E-Hybrid is limousine-serene in its refinement, ride quality and comfort. Even on 20-inch wheels, the standard air suspension does an astonishing job of smoothing out crinkled surfaces and steamrolling bumpy streets. Even in Sport mode, it’s perfectly agreeable for relaxed motoring.

What’s more, relying on the electric motor is no chore. Even in planet-saving mode, the electric motor delivers 100kW and 400Nm – more torque than pretty much any FWD hot hatch you’d care to name. 400Nm is diesel levels of grunt, and when fed through the Panamera’s eight-speed dual-clutch it’s plenty to get the big four-door off the line. Unlike some plug-ins, you won’t be holding up traffic when pootling about in EV mode.

Cruising at 110km/h with the drive selector flicked to ‘E’ for electric and the suspension set to Comfort is an easy way to squash kilometres. It’s a shame you can only do so for between 40-50km at a time before the V8 needs to kick in to take over from the battery, but even so the combustion engine is so muted that you’ll barely notice it humming away either. 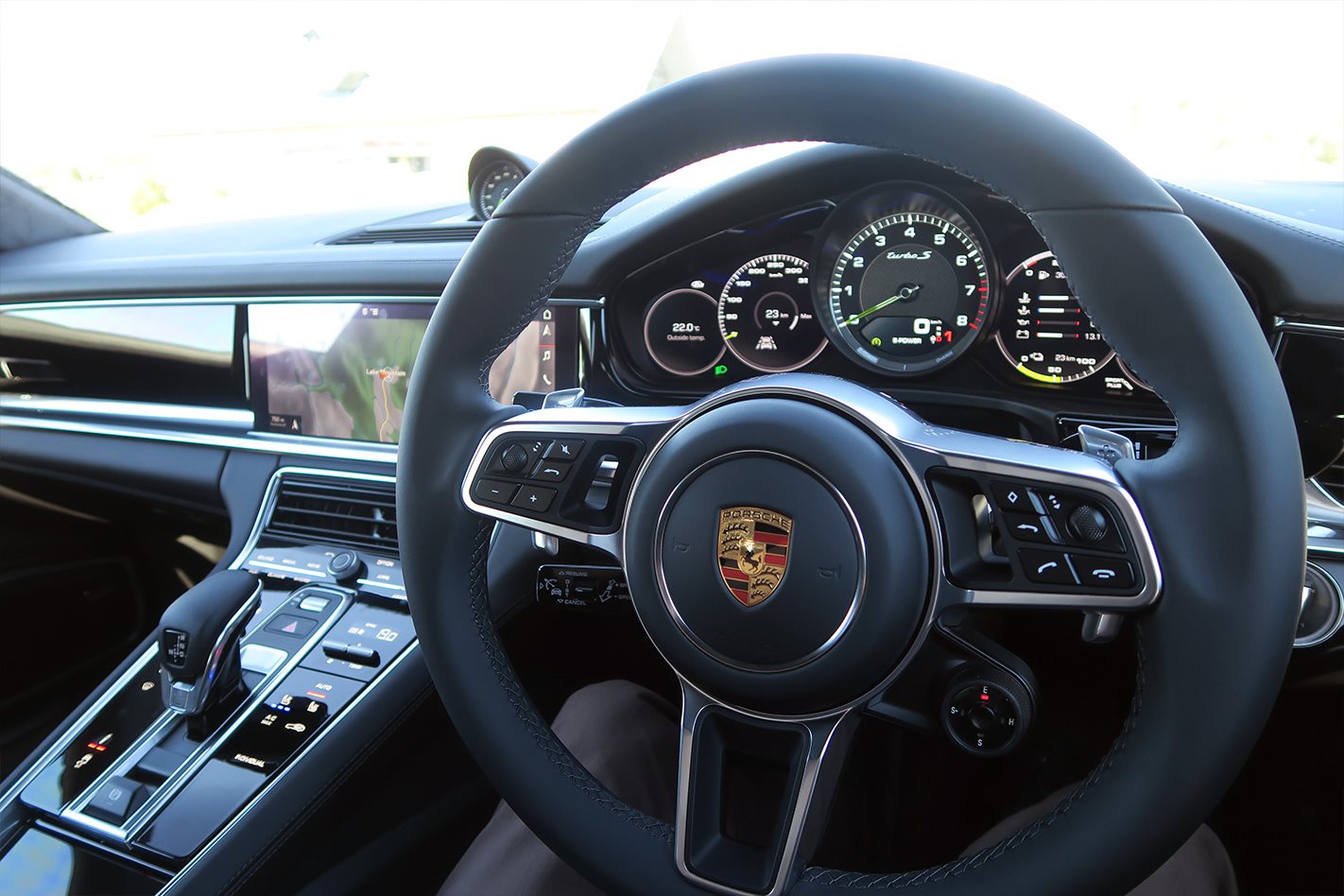 On the weekend, that luxurious cabin also made for a soothing two-hour ride out of Melbourne to our favourite section of mountain roads, east of Victoria’s capital. However, once in the foothills the Panamera transformed from mild-mannered to action hero the instant its steering wheel mounted drive mode dial was twisted to Sport+.

Sport+ rouses the V8, and the exhaust pipes spit water vapour as they warm. Muffler valves flipped fully open, the note is muted but bassy -  though given the car we tested was equipped with the $7650 Sports Exhaust option we’d have expected a few more decibels per dollar.

Aimed up a steep, snaking mountain road, you’d expect the Panamera Turbo S E-Hybrid to feel unwieldy given its 5.2 metre length and 2.3-tonne mass. However, the optional rear-wheel steering and enhanced power steering rack ($4340) work miracles when it comes to virtually shrinking the car’s 2950mm wheelbase. Feed in lock, and the Panamera’s long snout darts left and right with a willingness that’s more hot hatch than luxe limo. 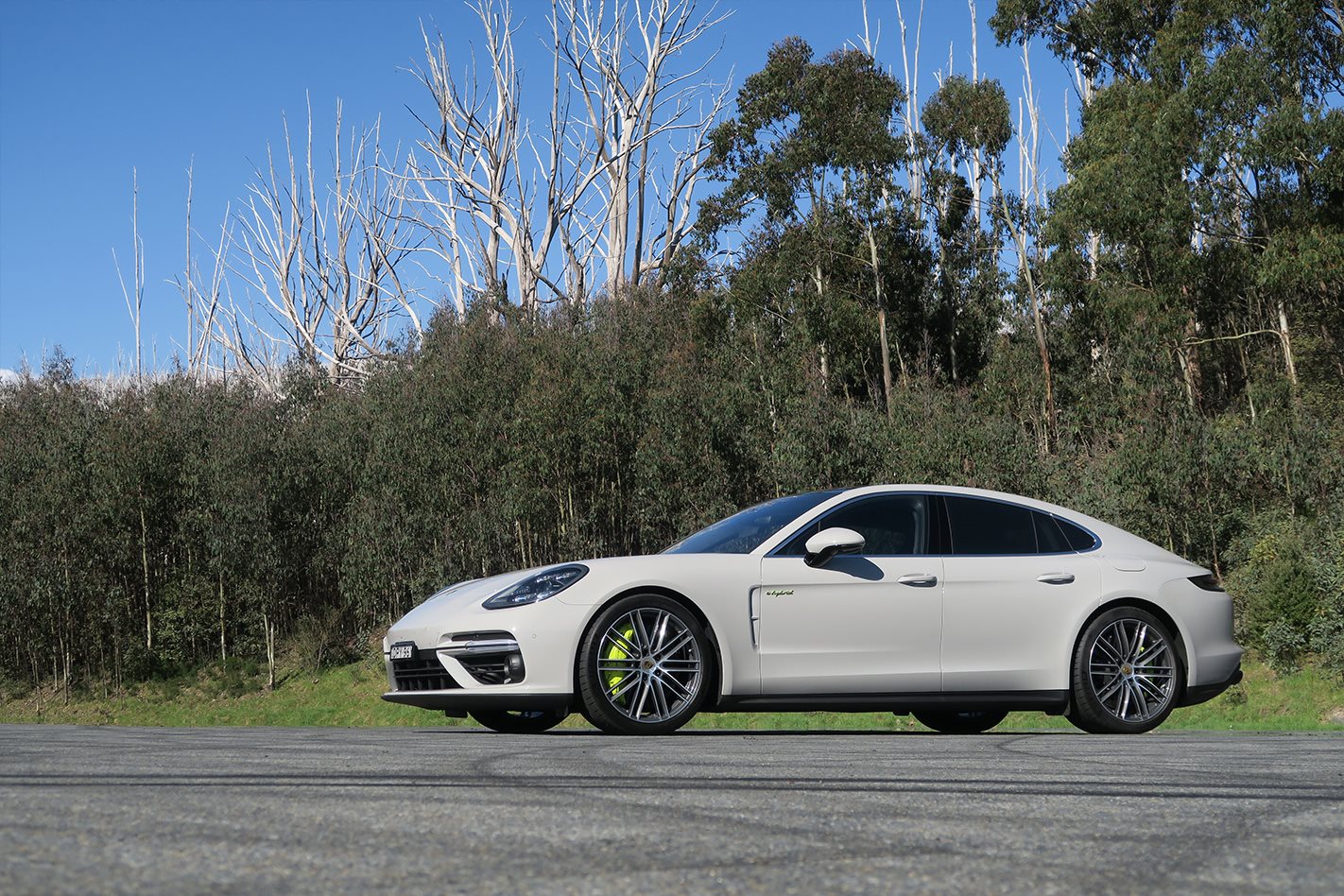 There’s no escaping physics, however, no matter how willing the steering is. Given its ferocious ability to pile on speed it’s an easy car to over-drive, and when you do the howling front tyres and understeer will signal that you’ve pushed it too far. If you’re expecting 911 or Cayman-like nimbleness then think again.

Rather, deploy the Panamera’s tech smarts to dispatch corners by braking hard and early, then picking up the power sooner than you normally would in something rear-driven. The electronics vector torque seamlessly and intelligently, and the result is incredible traction under power.

And when the full 500kW, 850Nm force of that twin-turbo V8 and electric motor kick in, the acceleration is savage. First gear is gone all too quickly, but second gear is when the action really intensifies. Tacho pointing north of 3500rpm and twin turbos at full huff, the prow lifts and the weighty Panamera surges forward at a ferocious rate. Porsche’s claim of 3.4 seconds on the zero-to-hundred is entirely believable. 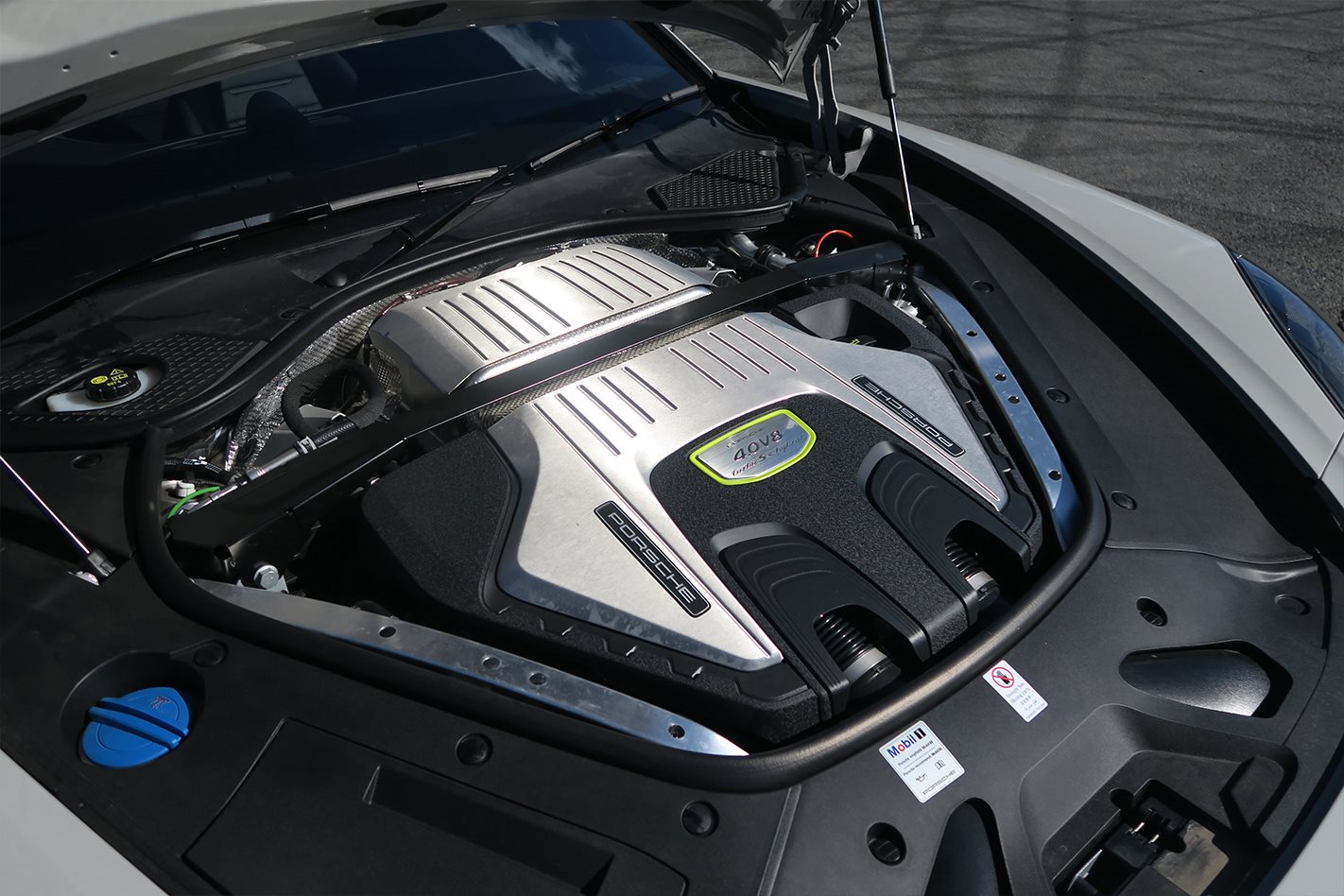 It’s worth noting that Turbo S E-Hybrid also has one of the best-feeling brake pedals of any hybrid. We struggled to pick the transition point between regenerative and mechanical braking, and the ultra-firm pedal is just perfect when pushing hard. Few hybrids and EVs get this right.

And driving it hard has a hidden benefit that has nothing to do with visceral thrills: it’s the fastest way to charge up the battery. When we began our ascent the battery was showing just 3km of remaining range. At the summit, roughly ten minutes later, that figure had risen to 32km. How? When the engine is on the overrun at high rpm, all of that otherwise-wasted mechanical inertia is converted into electrical energy and sent to the battery pack.

For us, that was enough to generate enough electrons to make it back home without needing the V8, and by the time we handed it back the average fuel consumption was an entirely reasonable 8.6L/100km – the bulk of that fuel burn was from the weekend thrash.

Now how’s that for a guilt-free thrill? 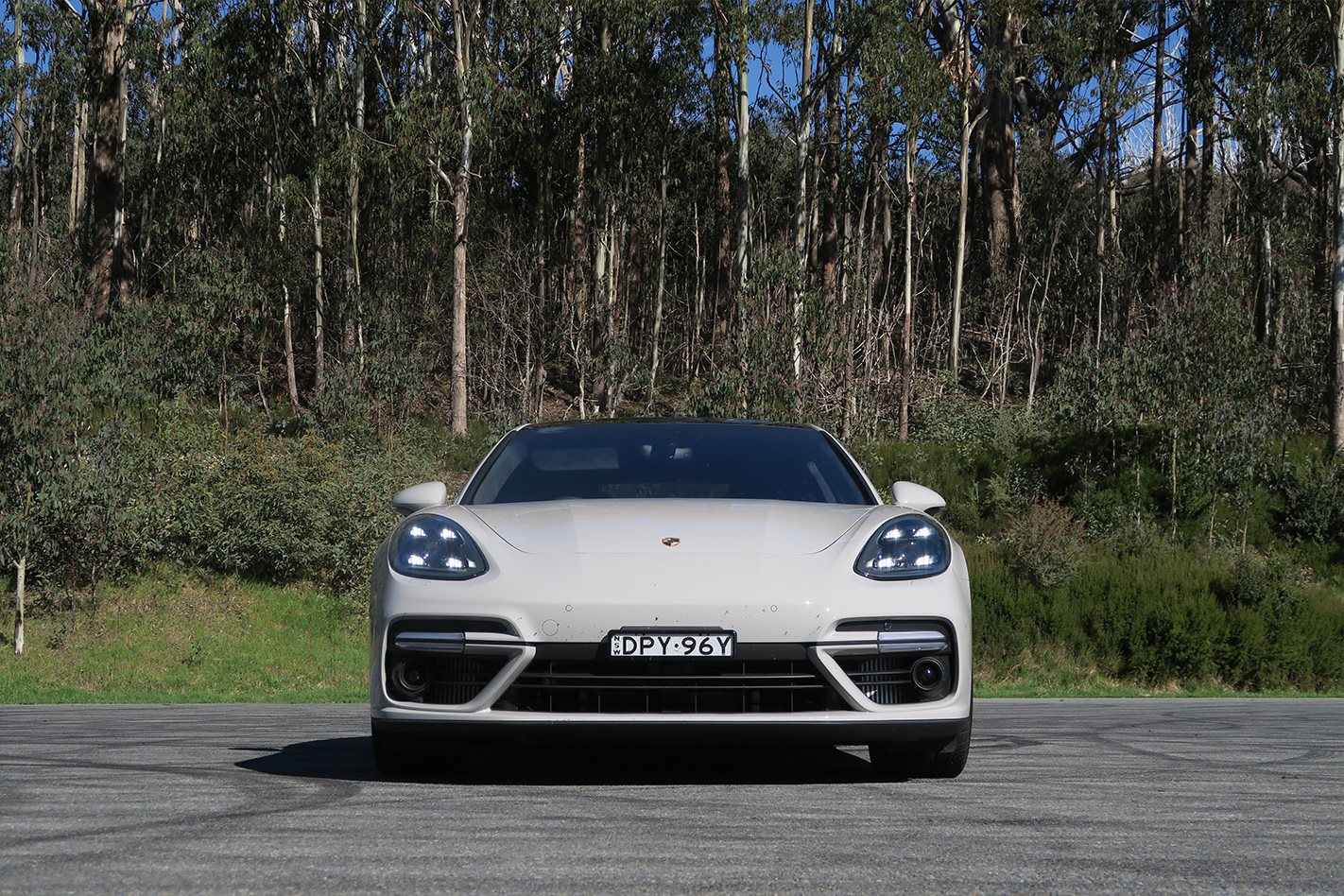 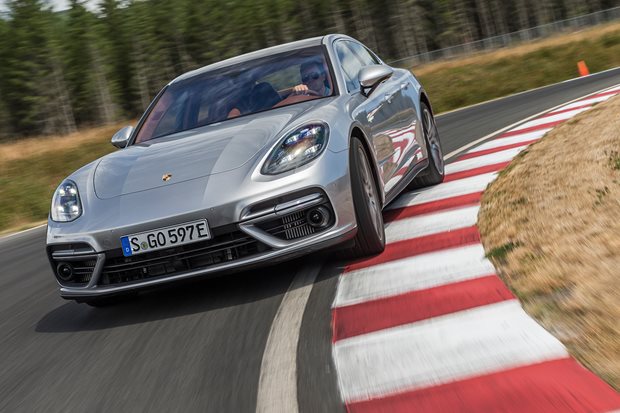 'Hybrid' once meant 'eco alternative'. Panamera Turbo puts a twist on that, and begins a new chapter of flagship performance for Stuttgart