A production-ready Aston Martin DB11 prototype has been caught in Melbourne as the brand finalises development of its 5.2-litre twin-turbo next-gen supercar.

Snapped by MOTOR reader Emerson Varley, this DB11, wearing Victorian registration and cloaked in typical white-and-black swirled camouflage, otherwise appears showroom ready. Near-complete development of the $350k-plus Aston Martin should be no surprise given its reveal is scheduled for the Geneva motor show on March 3.

Beyond the classic Aston grille, the headlights of the DB11 are more curvature in shape than the 13-year-old DB9 it replaces, stretching well into the front guards and packed with two ‘plus shaped’ bezels full of LED globes.

The bonnet features four vertical vents while – if we can take a hint – this next large Brit supercar is probably going to wear Bridgestone rubber. That may also give clue to potential bespoke tyre testing for the DB11. 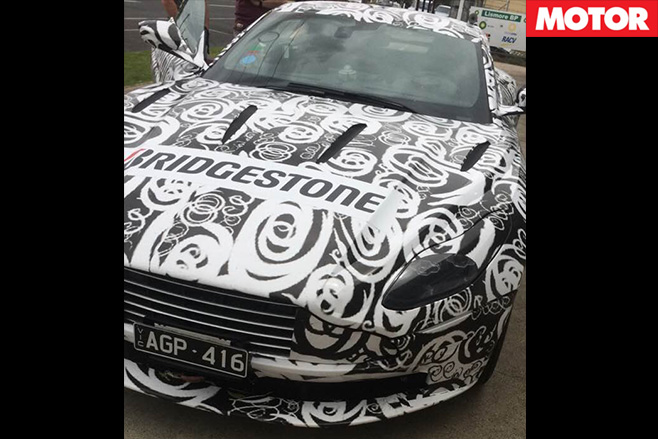 The rear looks similar to a Lamborghini Huracan or Honda NSX thanks to slimline tail-lights and a concave rear garnish with a pop-up spoiler atop. Even the aggressive rear bumper with dual exhausts look ready to roll off the production line.

Aston Martin has confirmed the DB9’s ageing 5.9-litre naturally aspirated V12 will be replaced by a brand new 5.2-litre twin-turbo V12, as previewed by a teaser clip on its YouTube account.

The DB11’s chassis is a complete overhaul the DB9, promising a big weight drop compared with the outgoing 1785kg coupe thanks to increased use of carbonfibre as previewed by the Vanquish and One-77 models. Consequently, expect a sizeable reduction on the DB9’s 4.5-second 0-100km/h personal best.

Expect to see a camouflage-less Aston Martin DB11 – and full details on the new supercar – around this time next month.