“Not a chance” that the Australian Grand Prix will shut its gates to punters, despite Bahrain ban

The World Health Organisation has now formally identified the outbreak as a pandemic, while the NSW state government is set to announce that the Royal Easter Show - one of that state's biggest annual events - will be cancelled for 2020, along with other mass-attendance events.

The second round of the F1 championship in Bahrain will be held behind closed doors, while the Veitnam and China rounds have been postponed.

Meanwhile, the MotoGP motorcycle championship has now cancelled or postponed the first for rounds of its 2020 season.

The United States has also just declared a 30-day ban on all travellers from Europe except the UK, which will throw world travel plans into chaos.

On the ground in Melbourne, WhichCar has learned that there are six or more F1 personnel who have been quarantined after showing symptoms of the virus, up from the single McLaren and pair of Haas F1 team members confirmed as being under quarantine after attending the on-site coronavirus testing facility at Albert Park.

Renault and Alfa Romeo both cancelled their media events with their drivers on Wednesday, while it's a wait-and-see situation for the rest of the paddock, according to insiders.

What you need to know

As of Thursday 1200hrs, the Australian Grand Prix is still going ahead as planned, and a press conference is expected to be held today.

F1 has announced that that autograph sessions have been cancelled, to be replaced by q-and-a sessions, while the practice of drivers meeting and greeting fans on the walk to the F1 paddock will be banned.

Parking is at a premium at the venue, and public transport is still being suggested as the best method of travel to the event.

UPDATE 9/4 – Andrew Westacott, the CEO of the Australian Grand Prix Corporation, has said that there is “not a chance” that this weekend’s season-opening event will be held behind locked doors, as Ferrari and Alpha Tauri (formerly Toro Rosso) cars land in Melbourne.

The news comes despite the announcement that the second round of the series in Bahrain will be run in front of empty stadiums after government authorities there announced a ban on public gatherings.

Other sporting events around the world, including high-level soccer games in Europe, are also being played behind closed stadium doors. However, the AGP looks set to go ahead as planned.

“Not a chance,” Westacott told SEN when asked if the race could be held behind closed doors. “When you look at 86,000 at the MCG last night [for a cricket match], and the [AFL] footy the week after, we’ve got to go around things sensibly and keep moving on through life while taking the necessary precautions.”

Fifteen cases of COVID-19 have now been confirmed in Victoria, but Professor Brendan Murphy, the Australian government’s chief medical officer, told Fox FM he would not be worried about going to the AGP this weekend.

“There is no evidence of community transmission in Victoria at the moment,” he said.

The arrival of the Italian-based cars comes after that country is on the verge of announcing a quarantine state that could affect up to 16 million people in the north of the country, including those in Ferrari's home province of Modena. 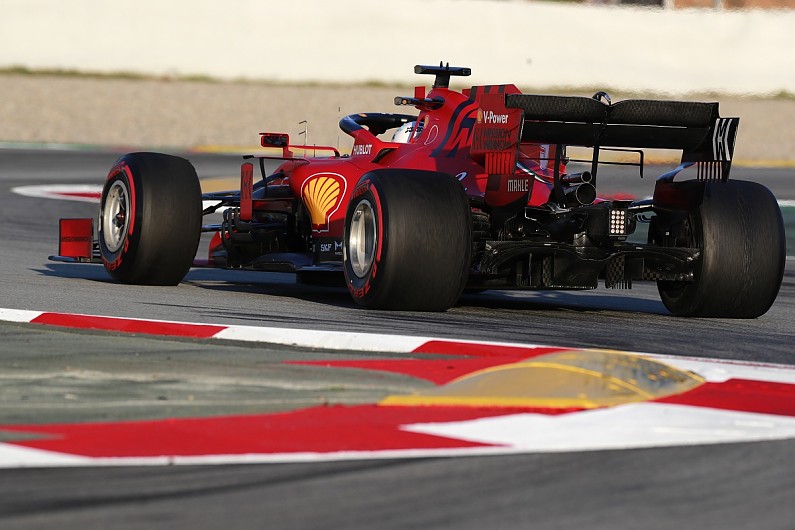 Travellers from Italy who have arrived in Australia are subject to additional screening procedures but aren't required to self-quarantine for 14 days. It's thought that the majority of F1 personnel are already in Australia ahead of the AGP, which kicks off on Friday./Tim Robson

UPDATE 05/03/20 - Prime Minister Scott Morrison has this afternoon announced increased screening measures for travellers arriving in Australia from Italy, but has stopped short of applying either a total travel ban or a quarantine period for passengers arriving into Australia from the European nation where more than 2500 cases of COVID-19 have been confirmed.

This measure firms up the chances of the Australian Grand Prix running as scheduled next weekend, as it allows team staff from Italy to arrive as planned - albeit via longer journeys to skirt past travel ban-affected areas like the Middle East.

A travel ban on Italian passengers was within the government's purview, as shown by it banning travellers from South Korea, one of the worst affected countries outside China.

The additional detection measures that passengers must undergo include temperature screening at check-in and upon arrival, as well as more rigorous questioning about their whereabouts in recent weeks.

The worsening coronavirus pandemic could threaten the Australian Grand Prix, with industry and health experts warning that an event cancellation needs to be considered.

Currently both Formula 1 and the Victorian State Government support the March 15 event proceeding as planned, but if the global health threat worsens, this stance could change.

Globally, cases for the COVID-19 virus have been worsening, with Europe, where many F1 teams are based, now being heavily affected.

Health experts from around the world now predict a global pandemic could be declared, while this week Australia’s Prime Minister Scott Morrison announced the Government would activate a pandemic plan in preparation.

This doesn’t mean a pandemic has been declared in Australia just yet, but does mean the Government is prepared to do so should more cases arise, with preparations under way to establish fever clinics, aged-care home lockdowns and increased medical stockpiles.

More than 80,000 people in 50 countries have been infected with the coronavirus, with nearly 2800 deaths.

University of Queensland professor Ian Mackay told The Australian that it was unrealistic to expect COVID-19 to be contained.

“We’re likely to have the virus become what we call an endemic virus, or a virus that’s just with us for life,” he said.

“We already have four of these coronaviruses, mostly causing colds. We get them every year. They peak during winter but they still move around between us during the rest of the year as well. So it’s likely this might become one of those.” 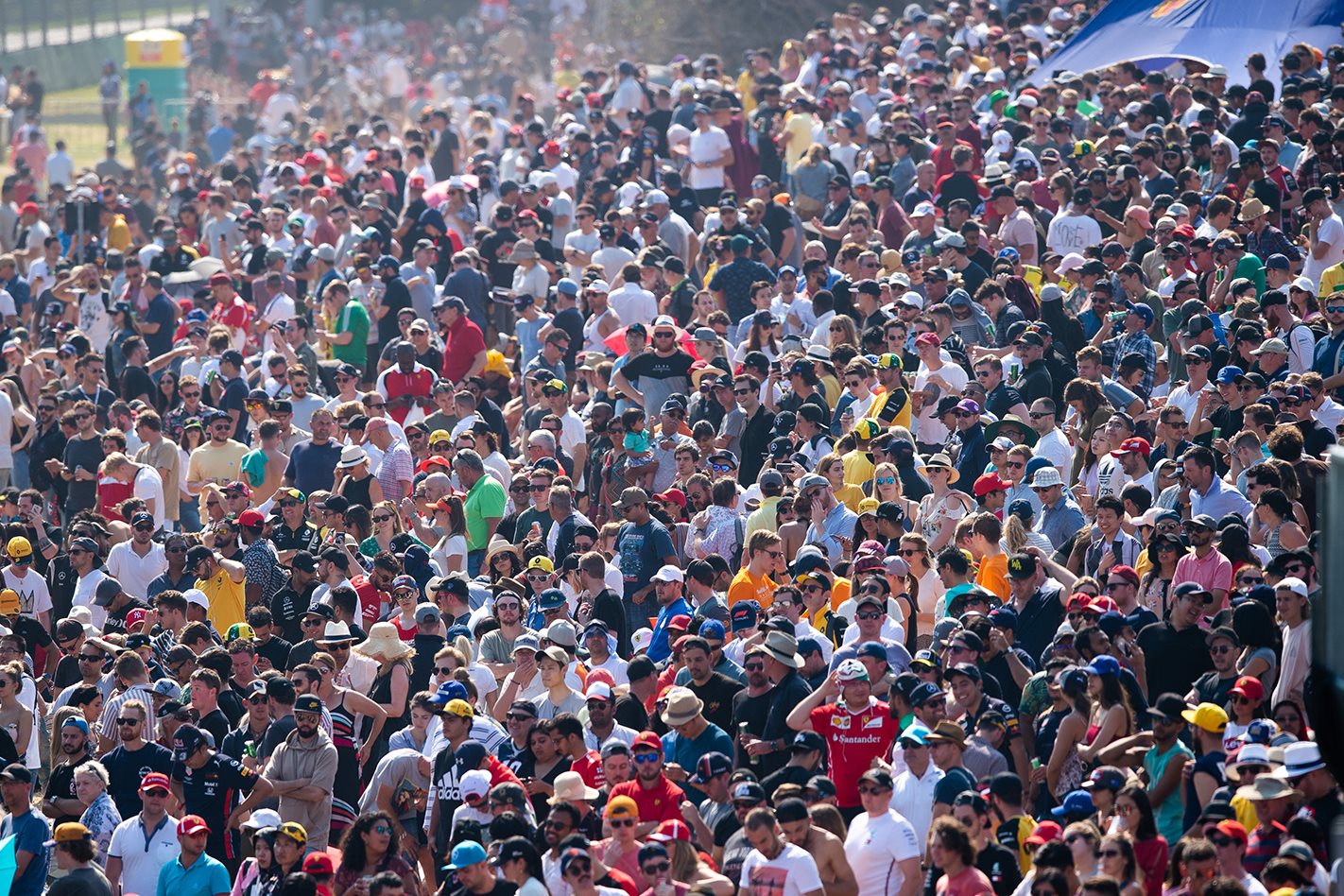 The coronavirus has earned a reputation for its ability to spread rapidly, prompting quarantining worldwide.

There have been 322 confirmed cases of the coronavirus in northern Italy, with 12 deaths recorded as of earlier this week.

Engine supplier Honda is keeping key personnel in Europe at the conclusion of Formula 1’s pre-season testing, instead of sending them home to Japan, where all schools have been closed and confirmed cases tally in excess of 200.

Formula 1’s chief executive Chase Carey remained confident the first three rounds of the championship would go ahead as planned.

Read next: You can buy a former Australian Grand Prix track for $80,000

Construction of the Albert Park grand prix circuit has been under way for the past month, ahead of the Australian Grand Prix’ 25th running since moving from Adelaide.

Victorian sports minister Martin Pakula said yesterday the Australian Grand Prix – which was attended by an estimated 324,100 people last year – would go ahead on March 15.

Meanwhile, the chief executive of the Australian Grand Prix Corporation, Andrew Westacott, said that any decision to cancel the event would be made by the Government.

“We take guidance from the chief medical officers in Australia and ultimately from government,” he told reporters. “Government and health officers will look at things medically and economically and assess risk.” 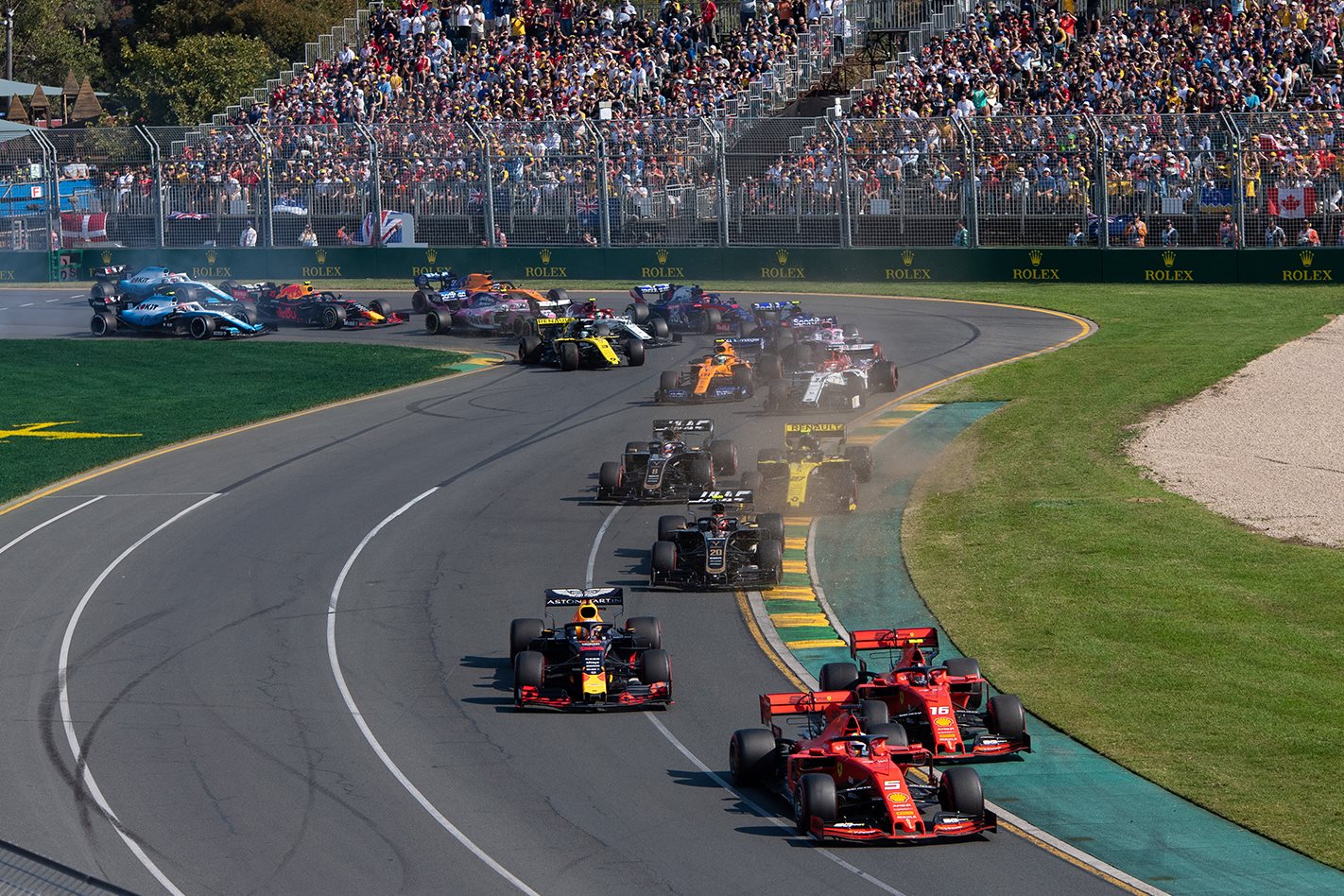 Felicia Mariani, the chief executive of the Victorian Tourism Industry Council, warned that the possibility of an event cancellation needed to be considered.

“The decisions around travel restrictions and how that might affect the conduct of the Australian Grand Prix will be made by government and health officials with the safety of the nation at its core,” she told The Guardian.

“We hope it will not come to cancellation, but the industry will need to be prepared for this, should it occur.”

Speaking to 3AW, Victoria’s Chief Health Officer Dr Brett Sutton said “we have to keep all options open” in relation to an event cancellation, while also downplaying any concerns that the grand prix could be called off. He also told reporters it was “very likely” that a pandemic would be declared.

“If it’s a very mild pandemic, like the 2009 flu pandemic, then you don’t need really significant action,” he added.

“But if it’s severe and we need to do absolutely everything possible to reduce the peak, reduce the number of cases, then we have to keep all options open.

“I think we keep it under review but these huge events are planned for months and months in advance and I think it would take some extraordinary activity of the coronavirus in Australia to cancel something like this at this stage.

“I think it’s almost certain to go ahead. It’s a huge economic boost to the country, and people are harmed by economic constraints as well, so we have to bear that in mind.

“People can die as a result of really significant economic harms.”

What do you think? Should the Australian Grand Prix go ahead as planned?