A prototype of BMW’s all-new G20 3 Series, which is due to be revealed in production trim at the Paris motor show in October. It’s an icon for the brand, a car that has long traded on being the dynamic benchmark in its class but also one that has lost some of its driver appeal in recent times.

To see if that dynamic magic is back. This is our first real chance to sample the all-new 3 Series with our drive taking in laps of the infamous Nurburgring circuit and time on the surrounding roads.

We’ll have to wait until 2019 to drive the finished product, but this first taste shows BMW’s once-brilliant mid-sizer is on-track to reclaim its driver’s car crown. Bigger, roomier and lighter, its dynamic step forward is also aided by wider tracks and a lower centre of gravity.

WITH dwindling global sales and its reputation as the dynamic leader in the class among its junior premium executive saloon rivals no longer insurmountable BMW’s 3 Series replacement, codenamed G20, can’t come quickly enough. We’ll see it officially at the Paris Motor Show, but we’ve spent some time in a 3 Series prototype in advance of its October unveiling.

Utilising BMW’s CLAR (Cluster Architecture) rear-wheel-drive platform, the next generation 3 Series will grow in dimensions, offer a range of revised engines, and improved info and entertainment systems inside a larger, more upmarket interior. There’ll be a slight increase in the wheelbase length for that more spacious cabin, but it’s the 30mm in track width that the engineers are most excited about.

Clearly stung by criticism that the existing 3 Series has been surpassed, or at least equalled on the road, that 30mm track width is instrumental, as well as a 10mm drop in the centre of gravity - in re-asserting the 3 Series at the top of the class. In addition the 3 Series features new dampers with hydraulic bump stops for improvements not just in agility and precision, but also ride comfort. The new dampers will be standard on all BMW 3 Series models, from the lowliest entry-level 318i to the 340i M Performance models, these additionally gaining 10 mm lower M Sport suspension with the option of an electronically controlled limited-slip differential.

With the suspension working off a platform that’s some 50 percent stiffer than its predecessor, our early drive of the 3 Series, on road and track, underlines BMW’s assertions that it’ll take class honours dynamically. The 330i we sampled did benefit from riding on the optional M Sport suspension, as well as featuring the optional electronic limited slip differential, variable sport steering and BMW M Sport brakes; the engineers admitting so equipped the 3 Series is at its very best. It’s unlikely to represent the biggest seller, though.

What is undeniable is the 3 Series feels appreciably bigger inside, while even these late pre-production cars had an interior that’s a big step on in terms of quality feel, as well as visually. That, say BMW insiders, was a key development goal, as the 3’s interior lacks both the quality feel and look of its key Mercedes-Benz C-Class and Audi A4 competition. The instrumentation, in this upper-level 330i model is all digital, lesser models likely to feature a mix of analogue and digital displays, the iDrive system a development of BMW’s latest seventh generation system.

With a 50/50 weight distribution, a reduction in overall weight by around 55kg over the outgoing model agility has been improved significantly. That’s been achieved without impacting ride comfort, those new dampers allowing a fine balance of both control and a smooth ride - even on the less than perfect roads around the Nurburgring.

On track, at higher speeds, the 3 Series exhibits that fine 50/50 weight distribution, the wider track aiding stability, the turn-in sharp, the steering being light, quick and precise with fine weighting - and what passes for feel these days. The chassis engineers admit there’s still about 10 percent of finishing work to be done, the tuning of the electric power steering being a key area of development.

The engine line-up will largely follow the current range, the 330i we sampled gaining around 5kW, for an output of 190kW, torque increasing by as much as 50Nm for a 400Nm maximum. Those improvements come with a five percent gain in economy, the outgoing car consuming 5.8l/100km. Getting the new 3 Series ready for the latest WLTP standards mandated by the EU will see the new 3 fitted with a particulate filter in the exhaust for both petrol and diesel models.

At the entry-point in the range the 3 Series will be powered by a 1.5-litre 3-cylinder turbo engine borrowed from BMW’s Mini. It should produce around 105kW, and will be badged 318i. Above that BMW’s turbocharged 2.0-litre four-cylinder will take the bulk of global sales, it offered in various states of tune from around 135kW in the 320i, to 190kW in the 330i.

Above that the 340i will be the only petrol 3 Series in six-cylinder guise, it expected to have around 272kW. Diesel choices will be retained, with the 2.0-litre four-cylinder turbodiesel badged 316d, 318d and 320d, with a six-cylinder 3.0-litre turbodiesel in both 330d and 335d guises.

In line with the current zeitgeist a pair of plug-in hybrid models will be offered. They will use both the 1.5-litre three-cylinder engine and the 2.0-litre petrol turbo engines boosted by electric motors of differing outputs. Likely to be badged 320e and 330e, the electric-only range will be in the region of 30-50 miles. 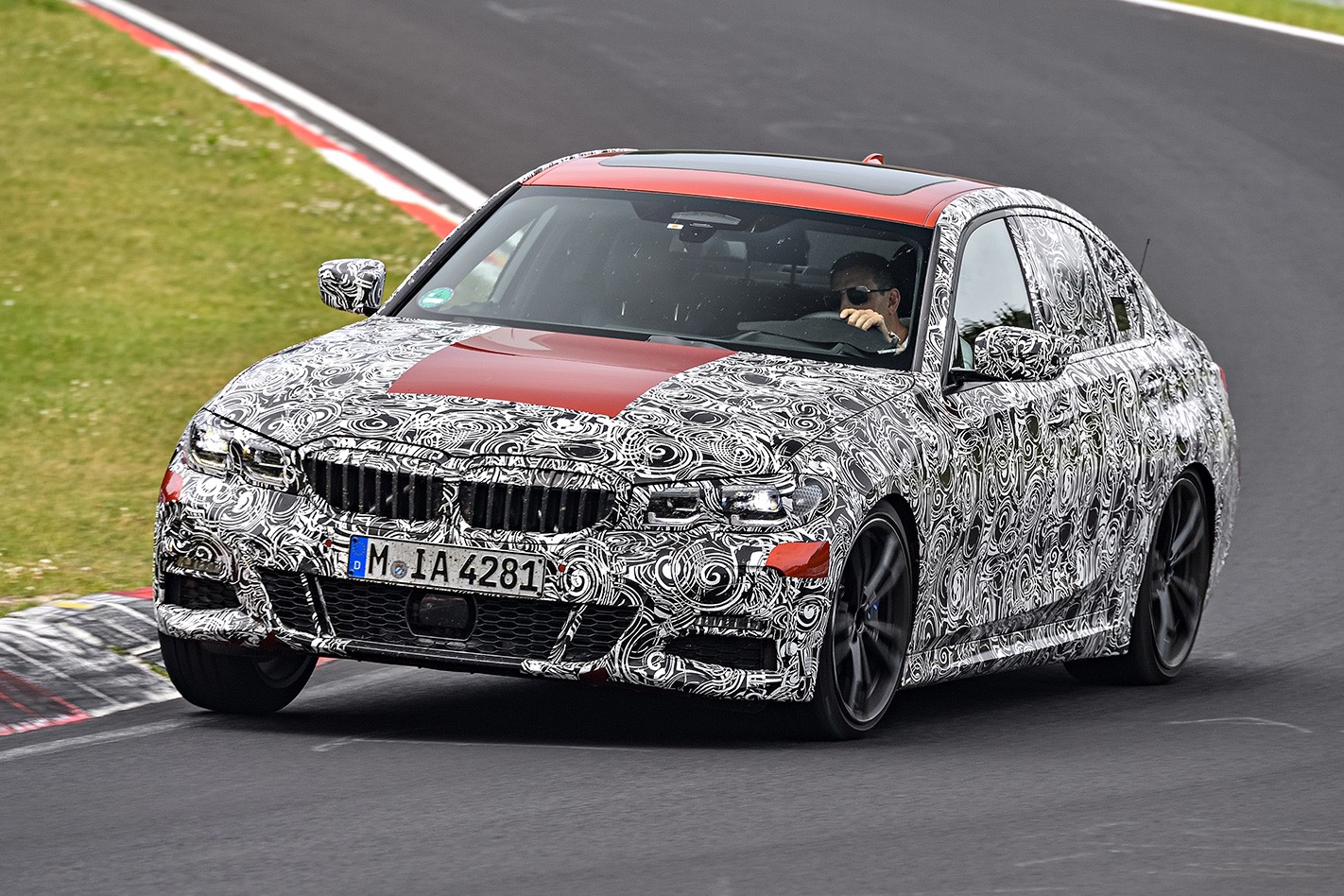 Like the existing range of 3 Series there will be the option of xDrive four-wheel drive, as well as M Performance models to take on Audi’s S and Mercedes-AMG’s 43-badged competition. The M Performance models will be introduced shortly after the 3’s introduction in Paris and early 2019 on-sale date, giving BMW some wiggle room before it replaces the M3, which isn’t expected until 2020.