UNTIL now, if you wanted to drive something out of the showroom that has four turbochargers under its hood, your choices were limited exclusively to vehicles wearing a Bugatti badge, but now BMW has an offering.

For the latest iteration of its M550d luxury sedan and wagon, the German carmaker has added yet another turbo to its triple-blower 3.0-litre six-cylinder diesel taking the total to four, and the results are spectacular. With all four units at maximum boost, the M550d has an extra 14kW and 20Nm over the previous three-turbo version, taking peak power to 294kW, while torque climbs to an axle-snapping 760Nm.

For comparison, BMW’s torque champion of the range – the M760Li – is powered by a twin-turbo V12 petrol that displaces 6.6 litres but only manages a 40Nm torque advantage over the 3.0-litre, but what do you expect from a measly two turbos?

At full chat the mightiest 7 Series produces 121Nm and 68kW per litre of engine capacity, while the M550d engine makes the V12 appear sedentary by comparison, producing a staggering 253Nm and 98kW per litre.

In the previous three-snail iteration, the M550d was not offered in Australia and this new version may also fail to make it down under, but the triple turbo engine is on offer under the bonnet of the current stump-pulling X5 M50d, which leaves the door open for its successor, which is likely to get four turbos. For the triple turbo application, the high-pressure circuit used a pair of small turbos, while the low pressure proceedings were taken care of by a larger single turbo. With four turbos however, the low pressure side has also been split into two smaller units, further reducing turbo lag for increased throttle response.

The new arrangement allows the 3.0-litre to generate a significant 450Nm at a barely-off-idle 1000rpm, while the full fat 760Nm is available between 2000rpm and 3000rpm. Clever variable exhaust channelling directs the flow of hot gasses depending on throttle position and load, and the second of the two high-pressure turbos remains idle at engine speeds below 2500 rpm.

As you might imagine, getting that grunt to the road would be tricky via just two tyres, so the M550d is available only in traction-boosted xDrive four-wheel drive. With a foot-flat blast off the line, BMW says its torquiest 5 Series can crack 100km/h in 4.4 seconds (4.6s for the Touring).

In a drag race to 100km/h the M550d would cross the line in a dead heat with the i8 hybrid sports car. 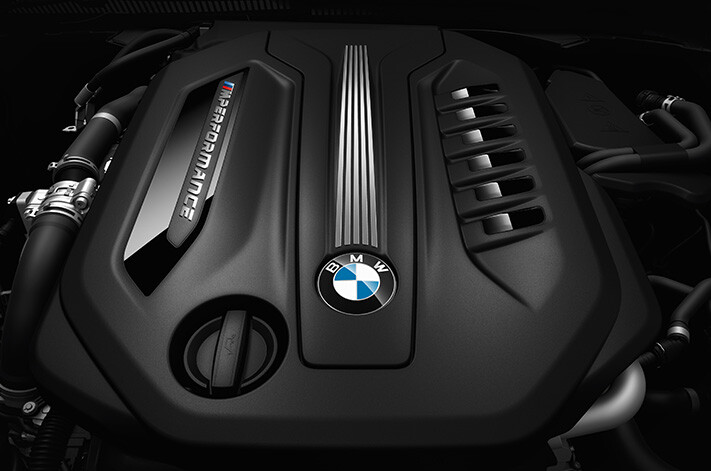 Despite acceleration ability that would embarrass many smaller, lighter and less luxurious cars, the BMW will also return a combined fuel consumption of between 5.4L/100km and 6.6L/100km.

The impressive credentials are hinted at with a sportier body kit, 10mm-lowered suspension and 19-inch wheels.

Power is sent to all four wheels via an eight-speed automatic transmission, which is programmed with selectable driving modes including an M Performance setting or the driver can hand pick the gears using steering wheel paddles.