WHAT IS IT?
A completely new generation of what was once considered the best sedan in the world, though 2017’s G30 5 Series is a much larger and far more sophisticated luxury machine than its much-loved E39 predecessor (1995-2003).

WHY WE’RE TESTING IT?
After John Carey’s glowing appraisal of the G30s he drove in Portugal – admittedly in non-Australian specification – it’ll be interesting to see just how well the new Five’s dynamism translates without the smaller wheels, more compliant suspension and the ‘Integral Active Steer’ four-wheel steering fitted to European launch cars. THE WHEELS VERDICT
On the cars we drove at its Australian launch – none fitted with the ‘Integral Active Steer’ that could prove crucial to the new Five’s dynamic reputation – the new G30 proved somewhat disappointing. No longer does a 5 Series encourage sporting driving straight off the bat, and with overly large wheel sizes on virtually all the test cars, it doesn’t ride like it should either. Thankfully, all engines are brilliant, quality is outstanding and the G30’s edgier styling is quite handsome, if deeply conservative. Here’s hoping the new-gen M5 (and perhaps optional four-wheel steering) helps the G30 achieve greatness. 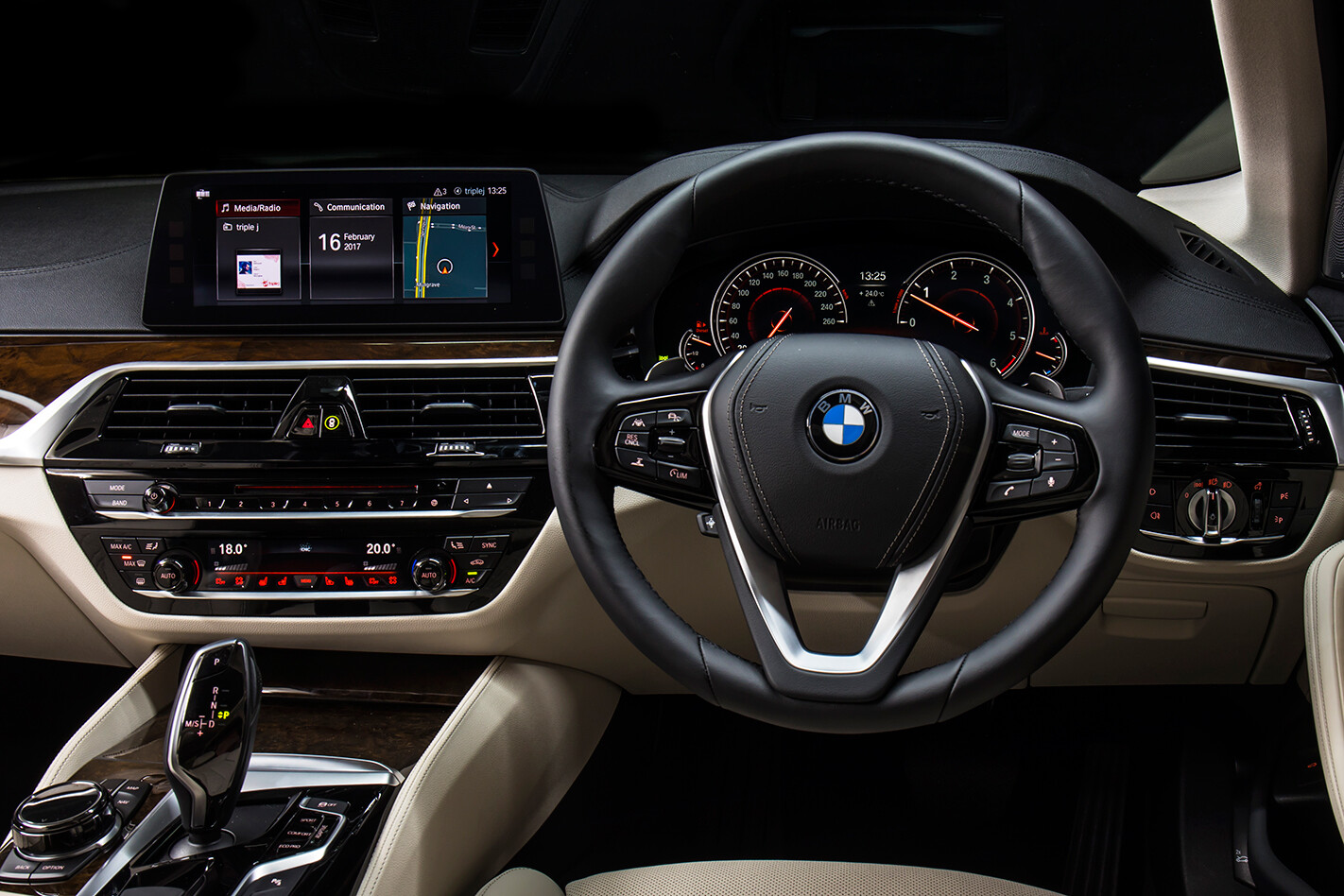 THE WHEELS REVIEW
IT’S BECOMING a bit of a lottery these days trying to find a (non-M) BMW that doesn’t boggle the mind with its minefield of dynamic options. And, sadly, the promising new G30 5 Series falls straight into the trap that has already caught out the F30 3 Series and second-generation F48 X1 before it.

Even BMW’s own employees are confused by the proliferation of suspension, steering and wheel choices, yet the irony is the new-generation 5 Series requires a very specific set-up to truly capitalise on its underlying sporting excellence.

At its international launch last December, the G30 Fives that John Carey drove weren’t representative of what Australians would see. An all-wheel-drive, four-wheel-steered 530d on luxury suspension and a 540i (wearing smaller 19s, not our oversized 20s) also with ‘Integral Active Steer’ four-wheel steering made a far more positive impression on smoother Portuguese roads than our two-wheel-steer G30 5 Series test cars did on South Australia’s more challenging surfaces. 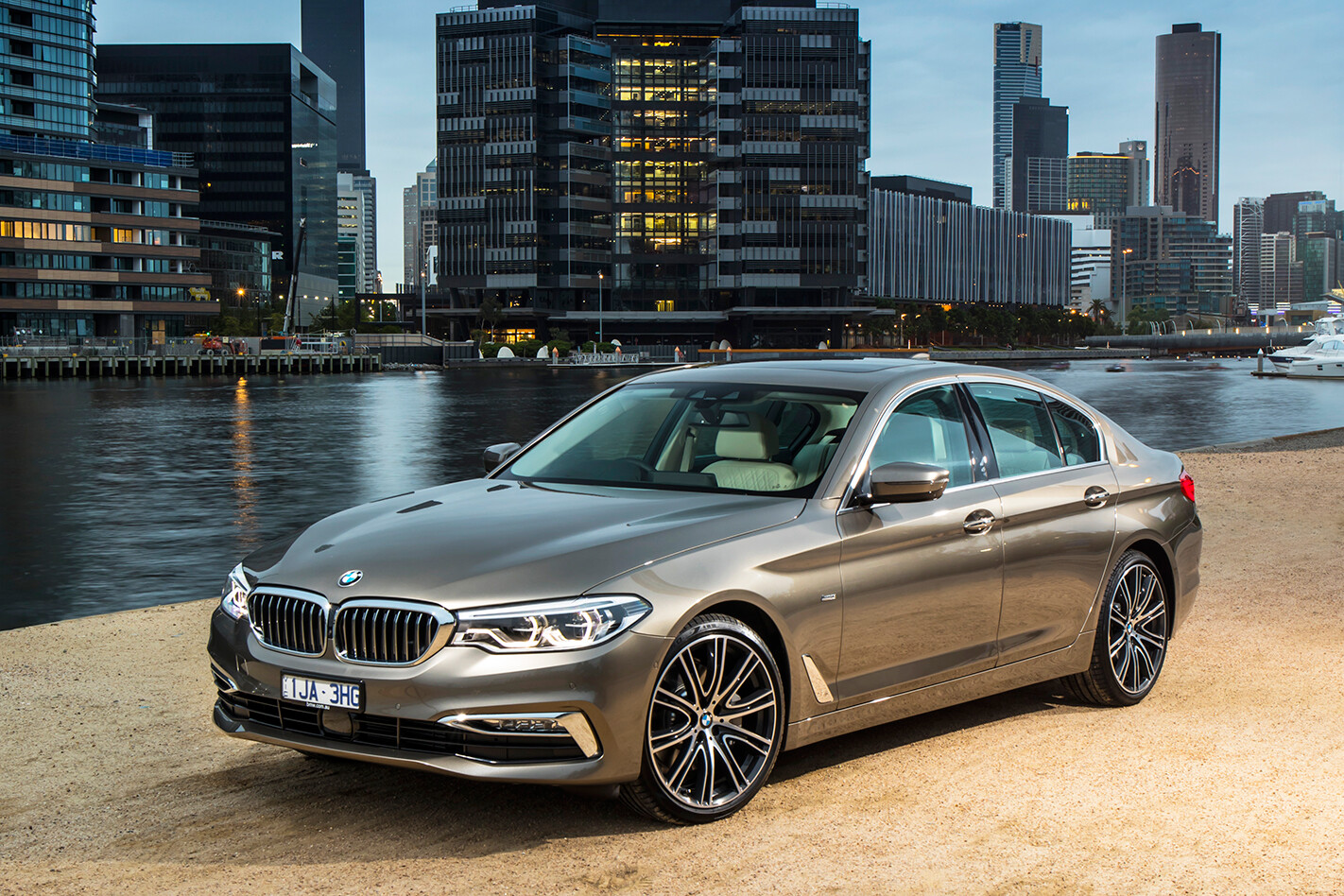 Yet on first impression, the well-endowed 540i isn’t our favourite G30. Its engine sounds subtly sporty but is arguably outdone by the turbo-four 530i and turbo-diesel six 530d in the pleasurable acoustics stakes. And even without optional variable ratio steering, the information fed through the 540i’s stylish new steering wheel is inconsistently and artificially transmitted, without any natural tendency to load up in a corner or any real intention to involve the driver.

It doesn’t ride well, either, with too much jiggle from the road surface making its way to the cabin. Sport mode removes some of the mild float evident in Comfort mode, but it still doesn’t add enough proper weight to the steering. And the new Adaptive mode is even more flawed, combining Comfort’s over-light steering with a suspension seemingly unable to truly sense what it needs to be filtering or feeding through.

Thankfully, the new Five’s handling prowess really shines when you ask plenty from it, though it’s only on really tight roads that its all-new, aluminium-intensive suspension seems hell-bent on hunkering the G30 down and driving it through a corner. With a quarter (or more) turn of steering lock on, you’d never know the G30 Five has a longer wheelbase than a Commodore (by 60mm), and 4936mm of overall length. It’s a big car, yet there’s an agility to its handling in press-on driving that must partly be attributed to sizeable weight losses of up to 95kg. Indeed, the turbo-six 540i weighs just 1595kg. The 185kW/350Nm 2.0-litre turbo-four 530i is more than a second slower to 100km/h (6.2sec) and almost a litre thriftier on the government fuel cycle (5.8L/100km), yet it’s a sweeter car overall. With a bit less weight over its nose and more natural (if still remote) steering connection, the 530i is an easier car to place on country roads, and sounds quite sporting. However, it’s the identically equipped 530d with its 195kW/620Nm 3.0-litre turbo-diesel six that made the greatest impression on us.

With 0-100km/h in 5.7sec and an astounding combined fuel number of 4.7L/100km, it seems like a great combination of sex and sense on paper. But the reality is even more persuasive, with a lovely, lusty induction growl as it surges up through the mid-range – like an old-school BMW petrol six – and a nonchalant effortlessness that’s totally in keeping with a car as large and luxurious as this.

Like other variants, the adaptive-damped 530d still doesn’t ride or steer like it should, and the enormous wheels fitted to our test car (20-inchers with 245/35 tyres up front and 275/30s at the back) really belong in a design studio, not on Australian country roads. But there’s a charm to the $119,900 530d that goes a long way to making up for its dynamic foibles.

Perhaps with optional Integral Active Steer (four-wheel steering) – a feature that did great things to the previous F10 5 Series’ dynamics – the new G30 will realise its sporting-luxe potential, though given that no Australian launch cars were fitted with 4WS, it’s too early for us to say. There’s no doubt the latest Five is a better car than its ageing predecessor, and few could argue with BMW’s decision to make its entire active safety suite standard on every model, along with leather, wireless phone charging, a head-up display, LED headlights, and pretty much a full suite of interior technology, too.

But the G30 5 Series is something of an enigma. Neither involving enough to appease driving purists or cosseting enough to be truly luxurious, it sits in a slightly confused middle ground, as much a victim of providing too much choice as it is from trying to please too many people at the same time.

If the E39 5 Series was the best sedan in the world in its day, then the G30 is mired somewhere in BMW’s excessive dynamic systems. Don’t give people a choice – just go with what you think works best and engineer the crap out of it.

We know there’s a great car lurking in the new-gen 5 Series, but it’s not there yet.

Fingers crossed for the new-gen M5.