The grim reaper of diesel engines will strike small cars first, and the carnage will be swift and widespread.

Wheels has written at length about the impending death of diesel; (see Insider, p20, Wheels, February), and nowhere is this more evident than in Volkswagen’s powertrain strategy for its next-generation Polo.

Speaking to Wheels at the launch of the VW Golf 7.5, Dr Holger Blume, a senior head of VW powertrain development, all but confirmed that the sub-2.0-litre diesel was dead for small cars, in maybe three to five years.

Dr Blume said, “Diesels are at their most efficient in low-rpm running on motorways, and these days, small cars tend to get used less in this environment. Ultra-efficient petrols and mild hybrids make far more sense in this [mostly urban] application.”

Dr Blume reinforced what is already on record from VW’s head of research and development, Frank Welsch: that the high cost of developing an effective emissions after-treatment system for a successor to today’s turbocharged 1.6-litre four-cylinder diesel (known internally as the EA827) – is a key factor in the decision for the switch in driveline strategy.

According to Dr Blume, “The after-treatment system needed to meet new regs is very expensive; maybe as much as the engine itself.”

Instead, we need to look to the new 1.5-litre EVO four-cylinder turbo petrol and the 1.0-litre turbo triple for a guide as to how VW plans to navigate the next phase of ever-tougher emissions and consumption legislation. The EVO 1.5, not slated for Australia at this point (but inevitable in the longer term, when the current 1.4-litre is discontinued) features lightweight construction, ultra-low-friction cylinder liners and internals, but is actually only the starting point for VW. 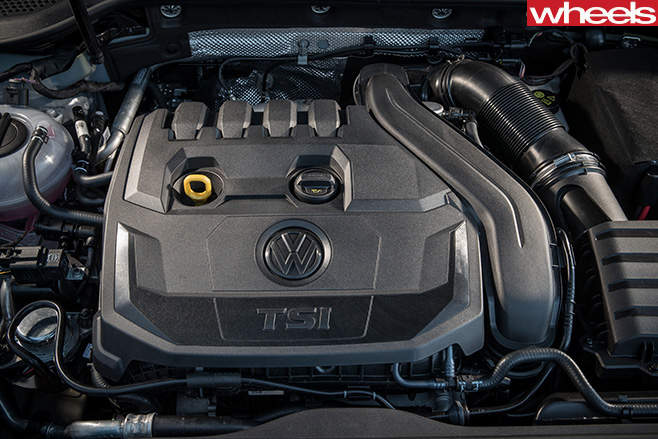 The Bluemotion version of this engine provides a clearer guide to the strategy the company will employ. It lowers consumption even further with the use of three core technologies. The first is a variable-vane turbocharger. This is common in diesel engines (with lower combustion temps), but was first used in a (hot) petrol application by Porsche to improve throttle response and output in the 997-series 911 Turbo; here, it’s used to spool up boost early in the rev range and reduce the need for a heavy foot for the engine to deliver acceptable torque.

Second, cylinder shutdown. Already employed in the current 1.5 EVO, this system see cylinders one and four shut down on a light throttle application, allowing the engine to run as a super-frugal twin when gradient is in the car’s favour.

Finally, when the driver’s foot is fully off the throttle, the Bluemotion EVO engine not just decouples from the transmission, it bypasses the idle state conventional ‘coasting’ functions opt for, and cuts out altogether. The car’s stored reserve of electrical energy is used to power key systems such as power steering, brake assistance, HVAC, and emergency functions.

But it’s not all death for diesel; at least not just yet. While binning development of the 1.5-litre four-cylinder turbo-diesel, Blume told us that VW will continue to develop a next-gen version of the EA288 2.0-litre four-cylinder turbo-diesel. “The 2.0-litre is important to continue,” he said, adding, “When it comes on stream in a couple of years, it will be outstanding in terms of low CO2 and Nox.”