Looks like AMG is planning an even faster version of its C63, but don’t expect it to wear an R badge.

A BEWINGED Mercedes-AMG C63 Coupe has been caught lapping the Nurburging, prompting speculation of an even faster AMG variant to sit above the S.

And is the black bootlid that contrasts with the mule’s blue bodywork a pointer to a weight-reduction program including carbon fibre?

The mystery surrounding the model deepens as AMG boss Tobias Moers told Wheels at last month’s Paris motor show that there was no intention to use the R badge from the upcoming GT R for any other model. 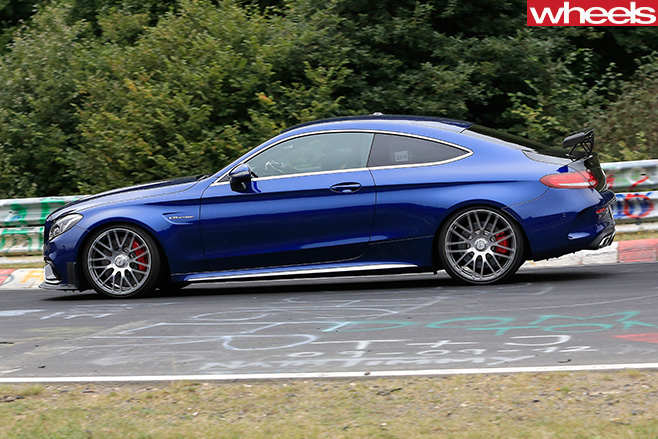 This means the testing mule’s extra appendages could point to a potential Black Series version, as with the 2012 edition that came to Australia with a $245,000 price tag and a limited allocation of 32 units.

History, however, suggests it’s far too early for a Black Series, which is typically introduced towards the end of a model’s lifespan. The C63 Coupe was released only this year.

Indeed, Moers said AMG is “still collecting ideas” about the best Black Series platform, and that he didn’t know when it would happen. 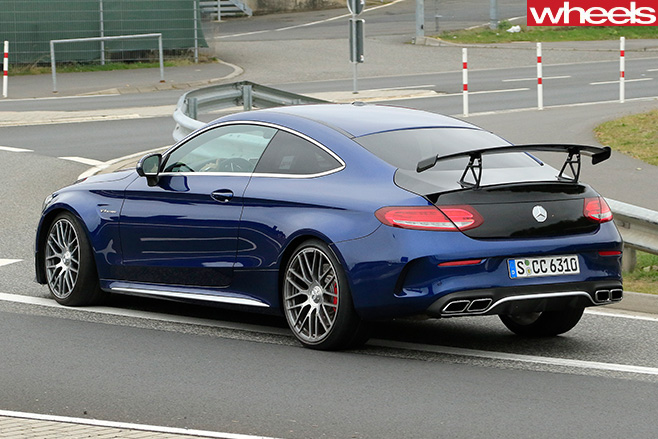 “Could be [an AMG GT], or a C Coupe. We don’t have a decision so far. We are so fully loaded and we don’t, to be honest, have the room to do something like that at the moment.”

Mercedes would surely love to have a rival for the track-focused BMW M4 GTS, though it’s possible these spy shots simply reveal a new optional aerodynamics package for the C63 – similar to what AMG offers with the A45 hot-hatch.

As for power, Moers is on record with Wheels saying the C63 S’s 375kW output is at the limit for what its rear-wheel drive platform can handle. An AMG-calibrated version of Merc’s all-wheel-drive system, though, is already used on the AMG C43 with a rear-biased torque split of 69:31.