Same silver cars up front, but the way they got there kept us entertained during a lively Australian Grand Prix.

But after the red flags had been put away and the scattered wreckage of Alonso’s devastated McLaren Honda and Gutierrez’s less-banged-up Haas Ferrari gathered up, a surprisingly fascinating and tense race (compared with the fare on offer last year) resumed.

At the finish of the interrupted 57-lap race, Nico Rosberg had repeated his victory of two years ago, and extended his three-race winning streak (from the end of last season) and continued his momentum into the new world championship. 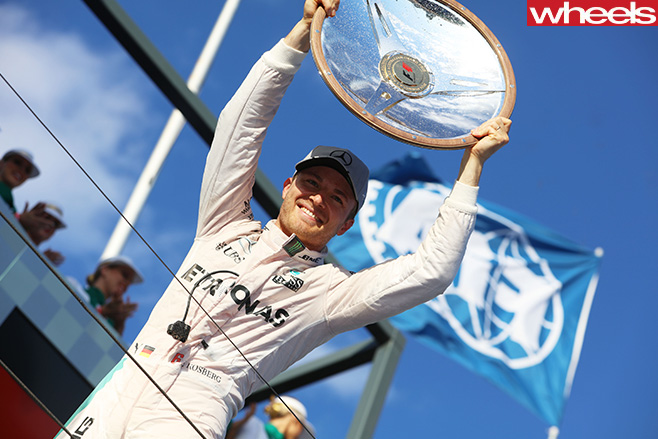 Rosberg was eight seconds ahead of pole winner and Mercedes teammate Lewis Hamilton and Ferrari’s Sebastian Vettel, third after jumping and holding an early lead.

It was a relatively unfussed drive (on the outside anyway) by Rosberg to the chequer – he didn’t have to overtake anyone. He was also helped to by Hamilton’s tardy start and some dodgy tyre strategy calls from Ferrari.

But Mercedes later revealed that the team came close to retiring Rosberg’s car after an overheating front right brake calliper reached a critical temperature. But it stabilised and Mercedes allowed Rosberg to go on to record his 15th victory.

It’s been a great weekend,” Rosberg said. “The car has been unreal today. We absolutely loved it.”

The Merc drivers’ often frosty relations of the past seemed to have thawed over the break. They embraced when they got out of their cars. 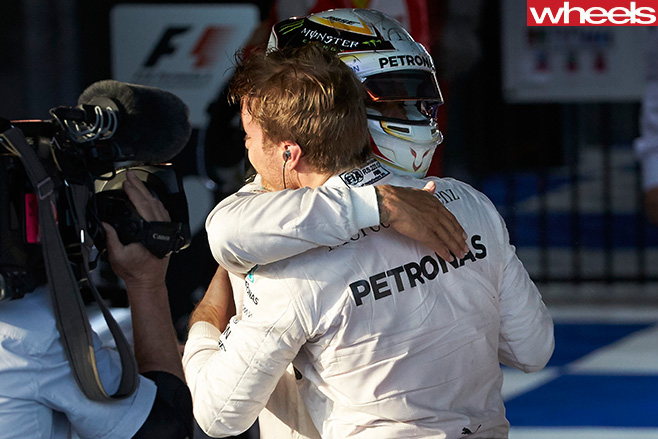 “Honestly it was a great race,” said Hamilton, who enjoyed the battle. “I love the fact we had to come for far behind. It was very tricky out there. It was just trying to get through the traffic with these tyres on. I’m really happy to get second. It’s a good result for the team. I’ve had much worse in the first race. I take it as a real bonus to come back. Bag the points today.”

A rousing start by Vettel set the tone for chat about a possible upset, the German slicing superbly through the two silver cars on the front row. That was unexpected, and so too was Kimi Raikkonen’s jump to second. But the Finn’s race was to end before half distance with a bonfire in the Ferrari’s airbox. 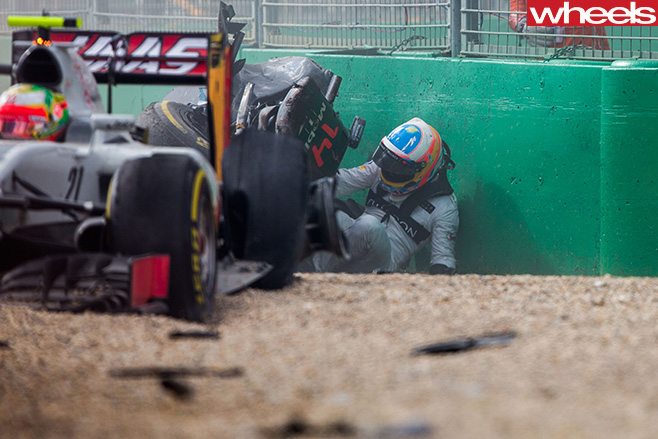 There were dices all through the field, and then the horrifying crash. Alonso clipped the rear of Gutierrez’s Haas at around 200km/h, slammed a barrier at turn three and then flipped violently several times.

The car was destroyed and it was a huge relief to see Alonso climb out, apparently unhurt. "I'm extremely happy to be here; it was quite a scary crash," Alonso said.

The second phase of the race was all about Rosberg in control although, as the field went through their tyre stops, Hamilton came good and took second.

In the closing stages, Vettel dragged himself up behind Hamilton until a slide on to the grass left the Brit secure in second. A little further back, Ricciardo was on a mission, storming past Massa on super soft tyres, and then reeling off a few fastest laps to get within 14 seconds of a podium. 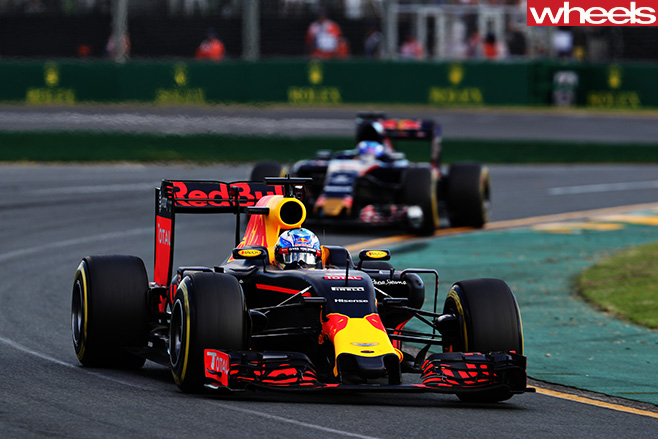 “Today was fun for me,” said Ricciardo afterwards. “It was so good to be back racing. I came on the radio more than once expressing my joy to just being out there competing. That joy was emphasised by having a good car underneath me.

“At the start we were able to pick cars off. We had good pace with high fuel on the Option and it was fun to be able to pass cars, I was enjoying that as always. I was sitting in a podium spot towards the end and I was hoping the tyres would last but I knew they weren’t going to hold and I would have to pit again. But fourth is still a good result and I’m happy we’re not that far off Mercedes and Ferrari.”

The scrap between the two young bucks from Toro Rosso was highly entertaining too, although Dutchboy’s constant whinging about being held up almost drowned out the noise of the cars.

After the race, stewards agreed with Alonso’s assessment that neither he nor Gutierrez was to blame for their huge shunt, deeming it a racing incident.

THE first day back at school for the class of 2016 told us nothing positive in terms of hinting at Who’s Hot and Who’s Not. Both sessions were wet or drying and there was little representative slick tyre running. A few incidents and impressions, yes, along with lots of questions, but few answers.

Rosberg made a mistake, looped the Mercedes, and wiped out a new front wing.

Ricciardo was caught out by rain on slicks and plopped his new matte-painted Red Bull TAG Heuer into a gravel trap. Explained it away by an urge to chat to fans at Turn 12…

More positively, a couple of newbies -- Pascal Wehrlein and Rio Haryanto of Manor -- looked very competent and confident in the mixed and varied conditions. Early days, though.

After running its RS16 cars in black during testing, returning Renault F1 went to a new rich yellow colour for the world championship proper. Looked smart and better than the ‘yellow teapot’ of 1977.

The 2016 cars are a couple of decibels louder thanks to new exhaust requirements. They’re still not music to the ears of fans though. More drone than howl.

New radio restrictions had the drivers and teams cautious, too. A new regulation states that “the driver shall drive the car alone and unaided”. So no coaching. They can’t be told about their strategy, nor power unit settings, or to change the state of charge, mixtures…

BETTER, but not brilliant. Cold and overcast, but dry for the controversial new rapid-fire elimination qualifying, one going every 90 seconds until there were two.

DTM champ Wehrlein became the first go, followed by his Manor mate Haryanto. So Gutierrez and Grosjean avoided being on the back of the grid in their first race for the new Haas F1 team.

There were a couple of surprises perhaps, principally when Dani Kvyat followed the Haas drivers to the garage, an unsatisfactory 18th.

McLaren Honda supported the earlier claim that it is on the way up, with its two cars 12th and 13th.

Ricciardo made it into the third phase of the new qualifying but was first out (eighth). Versappen thrilled his fans with an excellent fifth in the Toro Rosso, with teammate Sainz seventh. The now Ferrari-powered Rossos look much improved.

Taking the second row were the Ferraris, who couldn’t fight for pole because there were out of tyres, leaving the top spot an arm wrestle between the Silver Arrows drivers. Ho hum, haven’t we seen this before?

Hamilton duly grabbed pole, by 0.360sec, but already the paddock was ablaze with debate about the farce that was the new qualifying. The idea of the new system was to guarantee more cars on the track throughout. Instead it was all over with two minutes go, when Ferrari couldn’t send Vettel and Raikkonen back out again to challenge the Mercs.

Judgement on the format was mixed but most sided with Mercedes’ Toto Wolff: “I think the new quali is pretty rubbish.”

Most of the drivers agreed. Speaking to Wheels at dinner on Saturday night, Jenson Button declared “it’s not good to criticise the sport, but something’s got to change”.

“Many other areas need addressing [first].” Formula 1 bosses have agreed to ditch the controversial new elimination qualifying system for the next race.

By Sunday lunchtime, the teams made a unanimous decision to re-introduce the previous system for the Bahrain Grand Prix on April 1-3. 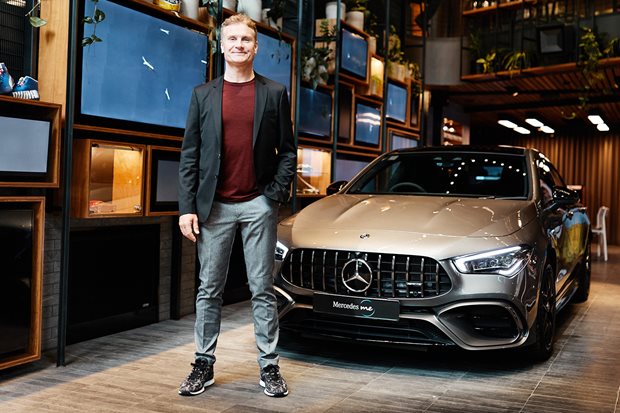