Honda and Rahal take two from two in Detroit

Honda might be struggling in Formula One but it’s a different story in Indy Cars, with driver Graham Rahal and the Japanese powerplant taking two strong wins in rival Chevrolet’s home town in the two-race Detroit Grand Prix at Belle Isle Park.

Seventy-lap races on Saturday and Sunday, each time preceded by morning qualifying, were the focus of so much interest, after a fascinating Indianapolis 500 the previous weekend. The big stories going into the Detroit round were Scott Dixon back in action just days after his shattering crash during the Indy 500, and former Formula One driver Esteban Gutierrez getting the nod ahead of Australian James Davison in the Dale Coyne car usually piloted by the still recovering Sebastien Bourdais.

Davison turned in a stellar drive subbing for Bourdais at Indy on short notice, moving forward from the rear of the field to lead the race in a performance that attracted a lot of positive comment. But in small outfits like Dale Coyne Racing, money speaks volumes. The Mexican had some to bring; Davison didn’t.

Gutierrez, a rookie in IndyCars, also came with welter of road-racing experience, making the choice a no brainer.

Ganassi Honda driver Dixon showed no outward signs of any after effects from his shunt, finishing second to Rahal on Saturday, battling through pain in his left leg and ankle on one seriously bumpy and physical racetrack. Rahal again dominated on Sunday, leading home Penske pair Josef Newgarden and Will Power who bounced back from a forgettable race 24 hours earlier, when he was 18th and one lap down.

The Sunday race was controversially red flagged and then restarted with two laps remaining, giving Newgarden and Power one last shot at Rahal.

But all three commented they were happy just to survive. Said Newgarden: “We had marbles all over our tyres - all we wanted to do was finish. We were sliding all over the place.”

Power added that he wasn’t close enough to Newgarden to think about a pass and that “he is my team-mate so I wasn’t taking any risks”.

With the two wins, Rahal vaulted nine spots in the championship standings, to sixth place after eight of 17 races. The 28-year-old second-generation racer is the first driver to win two races this season.

Overcoming a bout of food poisoning overnight, Ducati’s Andrea Dovizioso scored a gutsy win in the weekend’s epic Italian MotoGP race at Mugello in Tuscany in front of a noisy, record crowd of 98,269 spectators.

“Dovi” was flawless, taking the win – his third in MotoGP but his first in stable dry track conditions – from Yamaha’s Maverick Vinales and the impressive and fired up Danilo Petrucci on the satellite Pramac Desmosedici GP Ducati. 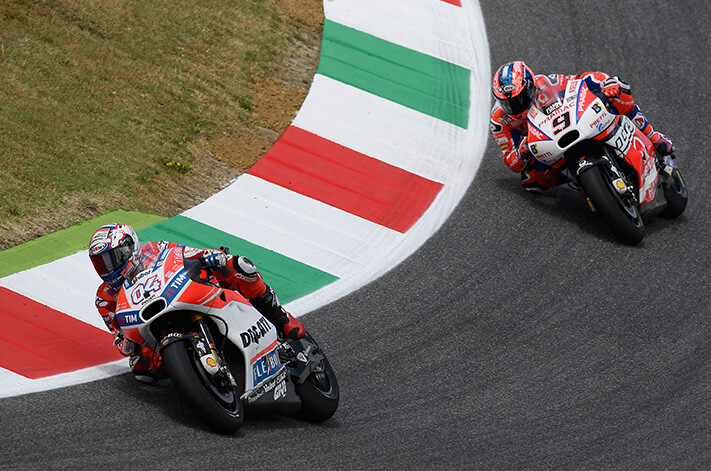 It was the first Ducati success at Mugello since Casey Stoner won there in 2009.

The bulk of the spectators, who created a sea of yellow on the hills, wanted a Valentino Rossi victory and the local legend gave them hope when, from the centre of the front row, he led into turn one and duelled with Ducati’s Jorge Lorenzo and Vinales in the opening laps.

Dovizioso, who started from the front row after qualifying third, was fourth in the early running but used the power of the Ducati and some strong late braking to push forward to second behind Vinales on lap six, as his team-mate Lorenzo dropped back through the field.

Dovizioso surged to the front mid-race but had to fight off attacks from ever-present Vinales and Petrucci, who got as high as second in the race of his life. “It was a fantastic day for me but it had started badly after a sleepless night because I had a bit of food poisoning,” Dovizioso reported afterwards.

“Today I didn’t have much energy, but I knew that the bike was going to be strong, because we had worked well throughout the weekend and I also had a lot of support from my fans, physiotherapist and family and this made a big difference. I rode really smoothly, I never forced the pace excessively and this made all the difference because Mugello is a track that physically wears you out and in any case the tyres did not allow me to push too hard. Finally we did it: winning at Mugello is really something special!”

Rossi, battling injuries suffered in a motocross training spill, had to settle for fourth, ahead of Alvaro Bautista (Ducati) and Honda’s Marc Marquez, who never threatened.

Lorenzo was eighth while Australian Jack Miller managed 15th after Dani Pedrosa took out Cal Crutchlow on the final lap as the Honda pair scrapped over a lowly 11th. 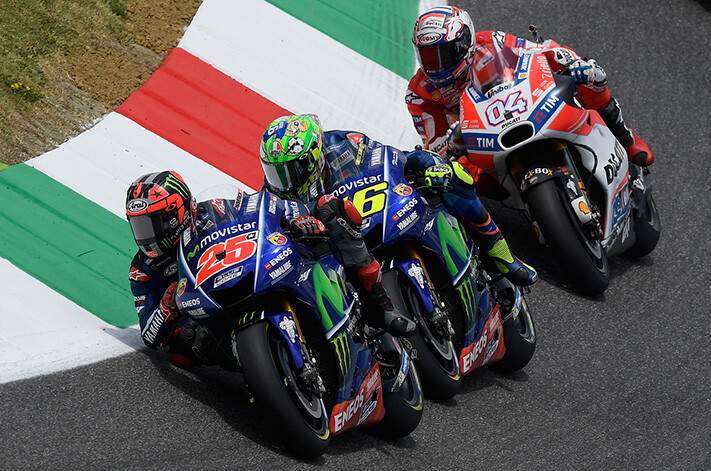 Vinales now has a 26-point lead in the championship, ahead of second-placed Dovizioso with Rossi a further four points away.

Racing in all three classes was spectacular, with Mugello’s slipstreaming possibilities making for great pack racing.

Six laps from the finish of the stunning Moto3 race, 22 riders were still part of the leading bunch, covered by a mere 1.6 secs!

There were at least 14 different leaders until finally KTM’s Andrea Migno claimed his first GP win by 0.05sec in a result which was in doubt right until the end. Moto2 also produced tight and aggressive fights up front before Mattia Pasini prevailed over Thomas Luthi and Alex Marquez. Luthi and Marque each led during the final lap before the bold Pasini carved past first one and then the other to snatch an emotional victory. Pasini’s last win was in the 250cc class in 2009.

Australia’s Remy Gardner also had a heartening time in the Tuscan hills, finishing 14thto bag his first Moto2 World Championship points of the season and his first for the Tech3 Moto2 Racing Team. Gardner is slowly regaining fitness after a broken ankle in the Austin race.

But those armies of spectators went home from Mugello deliriously happy with local heroes taking out all three GPs, and a Ducati on top in the premier class.

Probably fair to suggest we won’t see Hamilton at Indianapolis

Doncha love it when a self-absorbed prat gets his come-uppance? No, not Donald Trump, not in this case. Nor Tony Cochrane. Nor Lance Stroll.

Perhaps disturbed that the motor sporting spotlight was not on him but on another multiple world champ who was an ocean and half away contesting the Indianapolis 500, Lewis Hamilton checked his phone, adjusted his shades and patted his jewellery and delivered an unworthy put down of Fernando Alonso’s campaign at the Brickyard. Talking to France's L'Equipe, Hamilton sniffily opined:  “I took a look at the qualifying results. Fernando, in his first qualifying, came fifth. Does that say something about [the standard] of Indy Car? Great drivers, if they can’t succeed in Formula One, look for titles in other races, but to see him come fifth against drivers who do this all year round is…interesting.”

So in one mean and meagre quote, Hamilton (who at the time was flat-out under-delivering at Monaco) managed to belittle Alonso’s bold venture into the uncharted waters of oval racing while at the same time was disparaging of the whole American Indy Car community.

As we now all know, Alonso went on to deliver an outstanding drive in the 500, leading 27 laps and duelling comfortably in the top 10 when his Honda expired. Alonso elected to not respond to Hamilton’s barb, or maybe he is keeping his powder dry. There was no such reticence from 2013 Indy 500 winner and former IndyCar champion Tony Kanaan, who fired back at the Briton with interest in a chat with Brazil's GLOBO: “What can I say? [Hamilton] competed in a two-car world championship last year and was second, so I don't think he can say much. It was a pleasure to have Fernando here. He is humble, not like some of his colleagues who were making comments this month.”

But hey Lewis, more importantly… your new designer shades are trending on Twitter.

After, well, not doing very much at all this year up until he subbed for Fernando Alonso at Monaco, Jenson Button has now agreed to race a Honda NSX-GT Super GT machine in the Suzuka round of the Japanese championship.

Honda has confirmed that Button, a reserve driver for the McLaren F1 team, which uses Honda power units, will race in the 2017 Super GT Series on August 27.

On a circuit he is very familiar with, Button will share a Mugen Honda NSX-GT in the 1000-kilometer race with full-time team drivers Hideki Mutoh and Daisuke Nakajima.

The 2009 F1 world champion will test the NSX-GT for the first time at the Suzuka this week. He drove a prototype late last year.

Sydney, which hosted Australia’s first indoor Supercross show at the Entertainment Centre, is now on track to get Australia’s first ever permanent indoor motocross stadium which is intended to give dirt bike riders a new, legal and safe home in Sydney.

The Sydney Indoor MotoX Park is the first of its kind in Australia and the 12,000 square metre facility will be housed in a revolutionary, climate controlled, air-filled membrane dome, constructed in the United States. 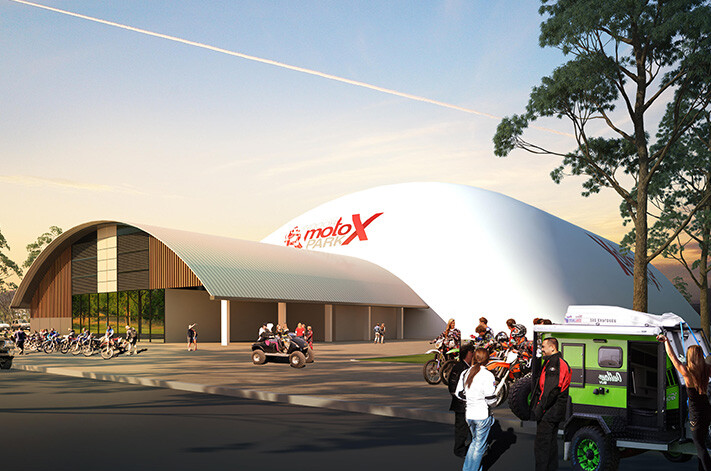 Riders heading to Sydney Indoor MotoX Park can bring their own bikes or hire one of the fully maintained bikes on-site - which will provide numerous levels of power depending on age and skill level.

Sydney Indoor MotoX Park will house three separate racetracks all capable of operating independently of each other.  Stadium style seating for up to 6000 spectators will all be part of the park.

Designed to operating in tandem with Garry Holt’s karting facility, it will co-use a café and retail outlet and will cater for varying skill levels from entry-level juniors right through to professional motocross racers.

CCTV will monitor all tracks, trained first aid practitioners and mechanics will all be available to those wishing to challenge themselves, whilst future plans include training camps from some of Australia’s best known motocross riders.

Privately funded, the project is the brainchild of lifelong dirt bike rider and motocross fan Mattew Bartolo. It was sparked by his frustration with not having a place close to Sydney to ride with his children.