For most of the 84th running of the 24 Hours of Le Mans, Toyota seemed on track to finally land its first win in the world’s toughest sports car endurance race.  It had been a tense battle between Toyota and Porsche with their prototype racers separated by only seconds for the majority of the classic.  But Toyota, with surprising pace and slightly better fuel consumption and therefore reduced time in the pits, seemed to have the slightest of edges. 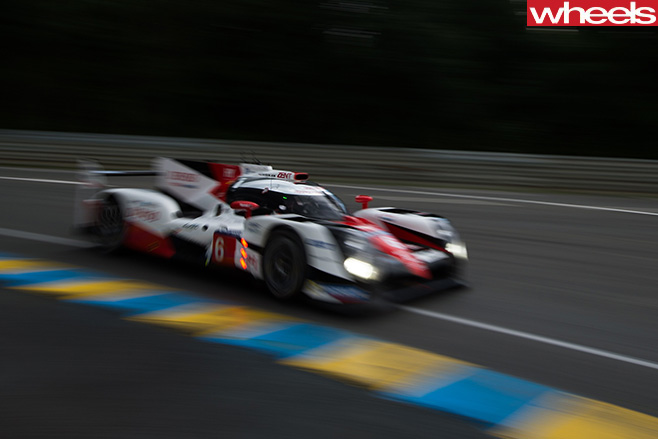 Then, in scenes of disbelief for the Japanese team, the leading TS050 Hybrid faltered with just five minutes remaining as it began what would have been the penultimate lap.  With Kazuki Nakajima at the wheel, the #5 he shared with Anthony Davidson and Sébastien Buemi suffered a sudden loss of power.  Despite strenuous efforts to restore drive, the car stuttered and then stopped on the start-finish line. The looks of utter incredulity on team faces were painful to watch as the shattered Japanese outfit saw its first-ever win at Le Mans snatched away and handed to Porsche.

After a painfully long pause, #5 eventually restarted and completed the final lap…but in a further knife to the heart, it moved too slowly to be classified as a finisher. 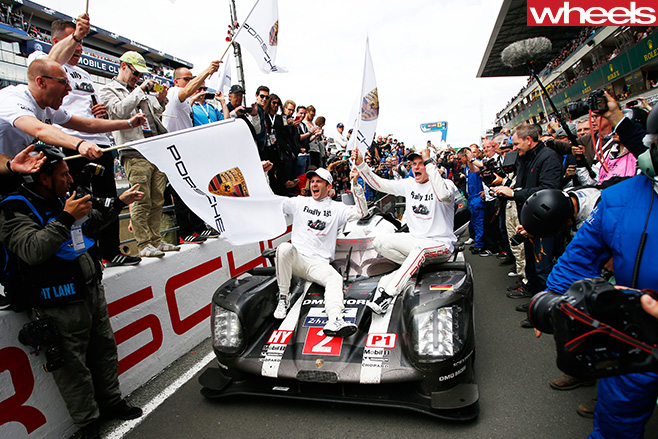 The pole-winning #2 Porsche 919 Hybrid of Romain Dumas, Neel Jani and Marc Lieb took the victory from the second Toyota, the #6 of Stéphane Sarrazin, Mike Conway and Kamui Kobayashi, a long-time leader of the race which suffered its own troubles late in the race.

With a mixture of incredulity and elation, Jani, Dumas and Lieb, celebrated on the podium in front of a huge crowd of 263,500. The drenching wet start to the race behind the safety car at 3pm Saturday seemed an eternity earlier.. 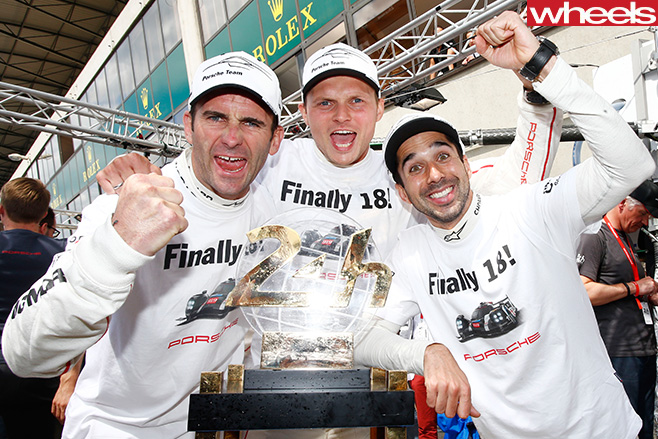 The punters had seen a riveting enduro highlighted by a classic duel that started with three factory teams but quickly reduced to two when Audi uncharacteristically struck trouble early, finally inheriting third place as the clock ticked over 24 hours.

Mark Webber’s Le Mans dream went all nightmarish around 11pm on Saturday – after eight hours - when his Porsche overheated with water pump issues whilst fighting up front,  leaving the #2 sister car to continue the fight. 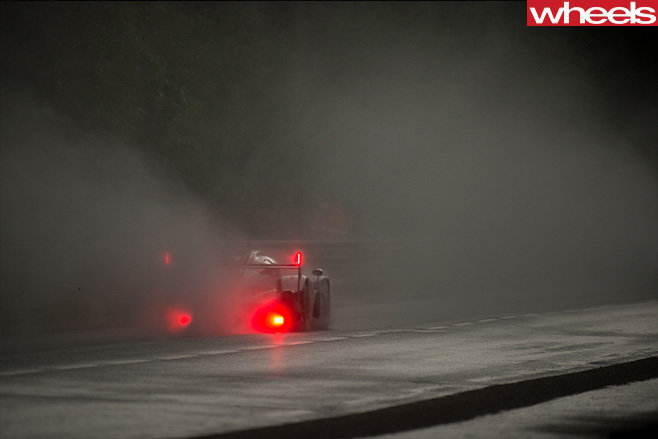 With two healthy cars, Toyota appeared in the box seat and while there were countless lead changes, the Japanese marque seemed on track to finally go one better than its second places in- 1992, 1994, 1999 and 2013.

The two Toyotas and lone Porsche duked it out with often only seconds overing the three-way battle for glory.

A regular winner in the modern era of endurance racing, Audi struggled after early turbocharger failure. 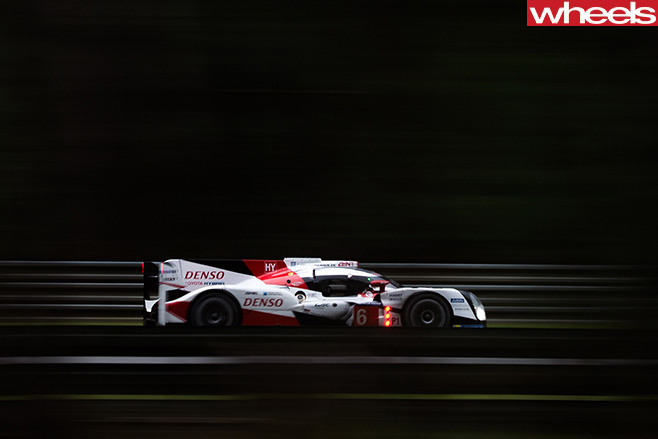 The Toyota’s TS050’s better fuel efficiency allowed it to complete 14 laps per stint, while its rivals were usually pitting one lap earlier. The #6 of Sarrazin, Conway and Kobayashi dominated much of the three-car battle before, in a tremendous triple stint, ex F1 driver Buemi dragged the #5 to the front.

The race was one of the closest in Le Mans history, with three cars locked in an intense battle for supremacy whilst weaving through the still-heavy traffic - 50 of the 60 starters were running at the finish.

All three contenders had kept up a relentless pace through the night and into the last phase of the race before the second Toyota lost time to have bodywork repaired. 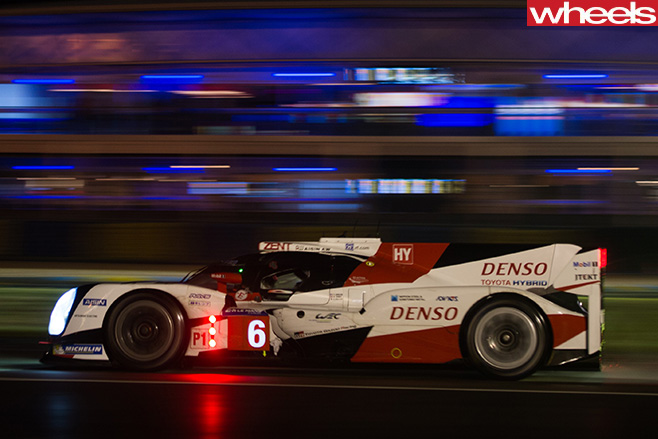 Then the incredible late drama…

“It’s hard to find the words for what has happened today,” said a shattered Buemi. “We were in control of the race and were so close to the win that we all want. This is the biggest race of the year so it’s even tougher to accept. It is so disappointing for the whole team; we did the right preparation and we had the car to win. So we already look to next year when the target will be clear.”

After a long stop for repairs the Webber Porsche fought back to finished 13th overall, Queanbeyan’s favourite son commenting: “I’m happy for our team mates and Porsche. But what has happened to Toyota is really hard to take and you have to feel for them.” 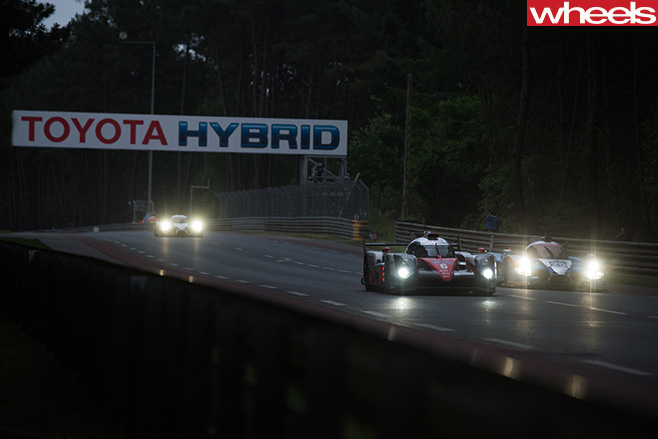 After a rough weekend, Webber can only curse his Le Mans luck, or lack of it.  In 1999, driving with Mercedes, he luridly had the aero issues and unexpected flipped in practice and the Saturday warm-up.  Returning with Porsche in 2014, he had to retire the car from the lead at the 22-hour mark and then last year he was an agonising second to another factory Porsche.

The revival of the hectic Ferrari versus Ford rivalry of 50 years ago was no fizzer with the two legendary Le Mans brands fighting hard throughout in the GTE Pro category, with the Blue Oval finally gaining the upper hand.