MotoGP puts on a stunner in bumper motorsport weekend

In appallingly wet conditions, Ducati’s Andrea Dovizioso showed he is a genuine MotoGP world championship contender as he out-dared and out-sped the most adventurous rider of them all, Marc Marquez, in a Japanese MotoGP contest that will surely be remembered as one of the great ones.

Those poor souls who missed the grand prix at Motegi have deprived themselves of some of the most magical, indelible moments in motor sport, when the two title contenders defied the atrocious conditions and ever-receding grip levels from worn treaded wet-weather tyres abused by excess throttle use for 24 desperate and damp laps.

Now, with three races remaining in 2017, starting with Phillip Island next Sunday, Marquez’s points’ margin to Dovizioso has shrunk to 11. It is game on. 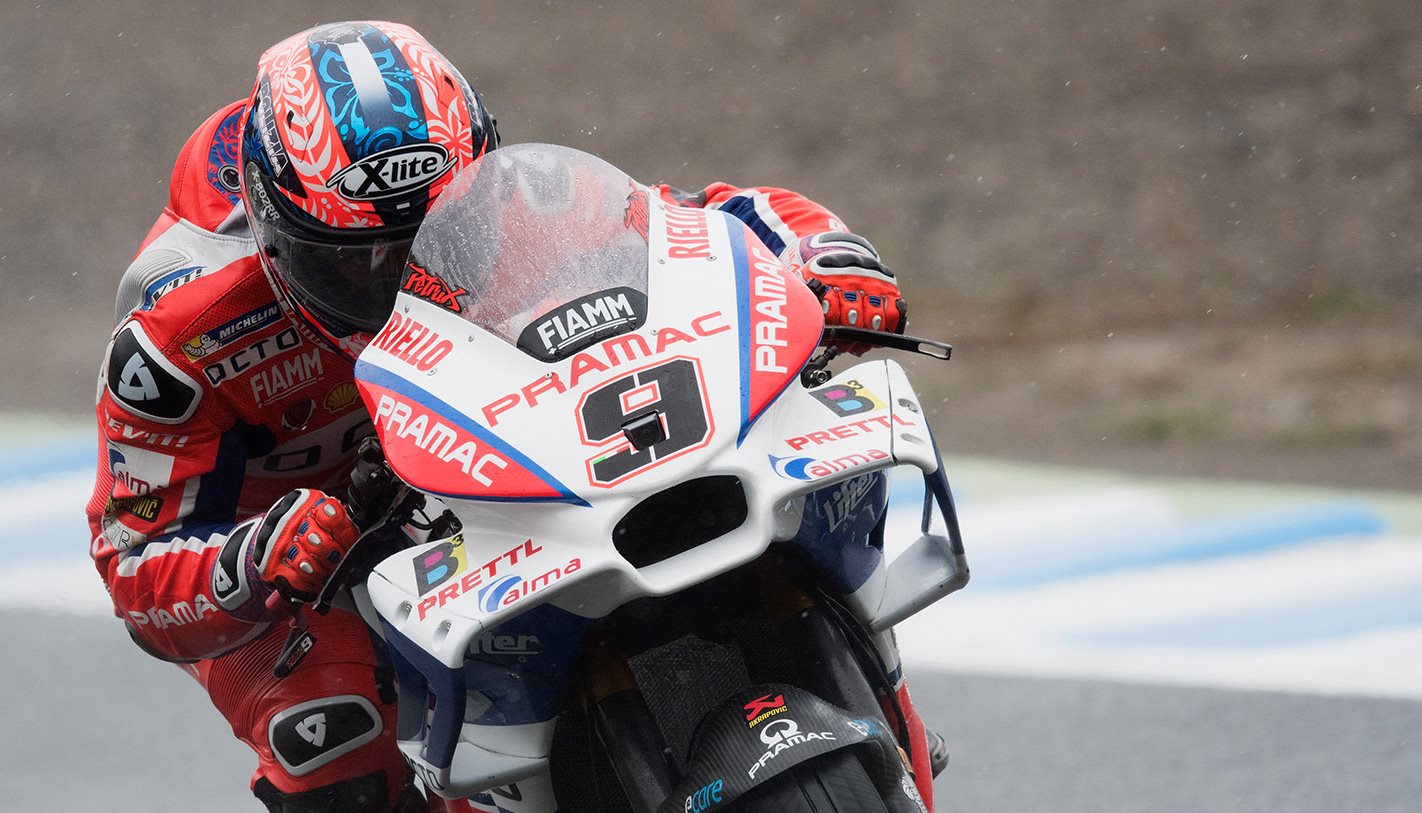 While that other prominent (four-wheeled) Italian brand based in Maranello seems to be beset by technical confusion and an absence of proper leadership, Ducati is looming as an outfit capable of winning a modern world championship.

Long considered a good MotoGP rider rather than a great one, Dovi now has the chance to elevate himself among the elite.

At a saturated Motegi, where it rained solidly across the three days, Honda’s Marquez looked to have the edge on everyone. He dominated the wet practice sessions, but then said he sacrificed a shot at pole in order to get some laps on slicks on a drying track on Saturday.

He ended up slipping back to third fastest behind Tech 3 Yamaha’s Johann Zarco, who nailed a stunning pole position, and Pramac Ducati’s Danilo Petrucci.

Missing from the Motegi weekend was Aussie Jack Miller, who broke a leg in a training mishap after the previous race. 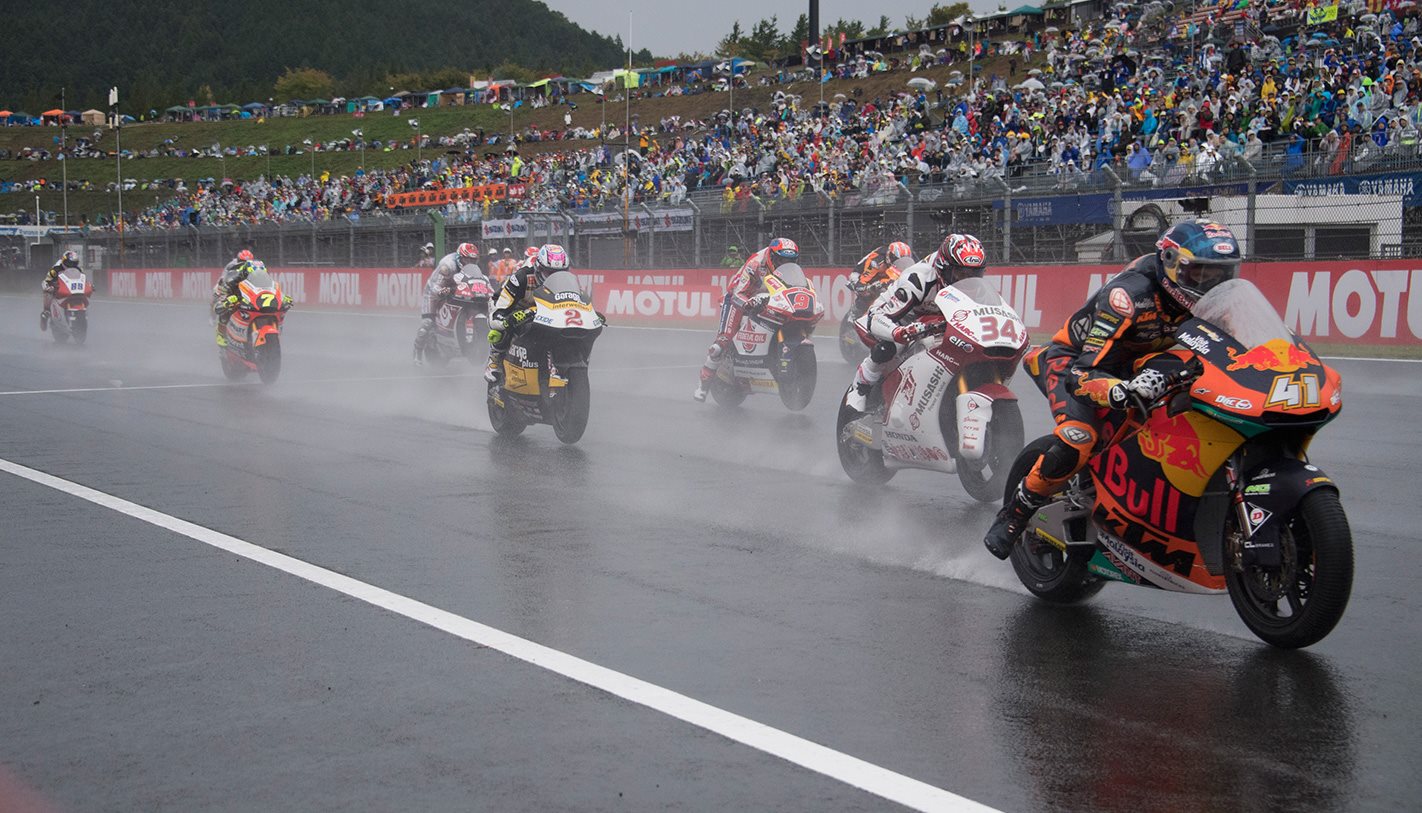 With visibility limited and the rain belting down, the start was crucial. Marquez swept to the front from the outside of the front row. Lorenzo moved forward to, into second, and then to the lead before the end of the opening lap.

Dovizioso too made a speedy getaway to stay with the leaders.

Yet to nab a MotoGP victory, Petrucci hit the front on lap two with  Marquez, Lorenzo, Dovizioso and pole man Zarco all looking busy.

Rossi hit the deck early, and with 12 laps remaining, Marquez fired past Petrucci to lead, with Dovi hot on his tailpipe.

Suddenly the two title rivals were in tight company and vying for victory. Dovizioso surged beneath Marquez with six remaining but within three laps, the Spaniard had forcibly elbowed his way back to the front.

It was dramatic, high-stakes duelling. Warriors on two wheels. In mad conditions. At nearly 300km/h. The last lap brought watchers to the brink of incredulity as first the Ducati and then the Honda muscled to the slightest of advantages. Marquez looked to have enough to hold off the Ducati when a huge moment gave Dovi a chance.

The Italian closed on the back straight and dived under Marquez at the next corner.

Marquez is never beaten though, and slung his bike inside the Ducati in the Victory esses, nosing ahead…but only momentarily. Dovizioso, always so smooth, held the better line and could get on the gas earlier. He won by 0.25s. Petrucci was a heroic third. 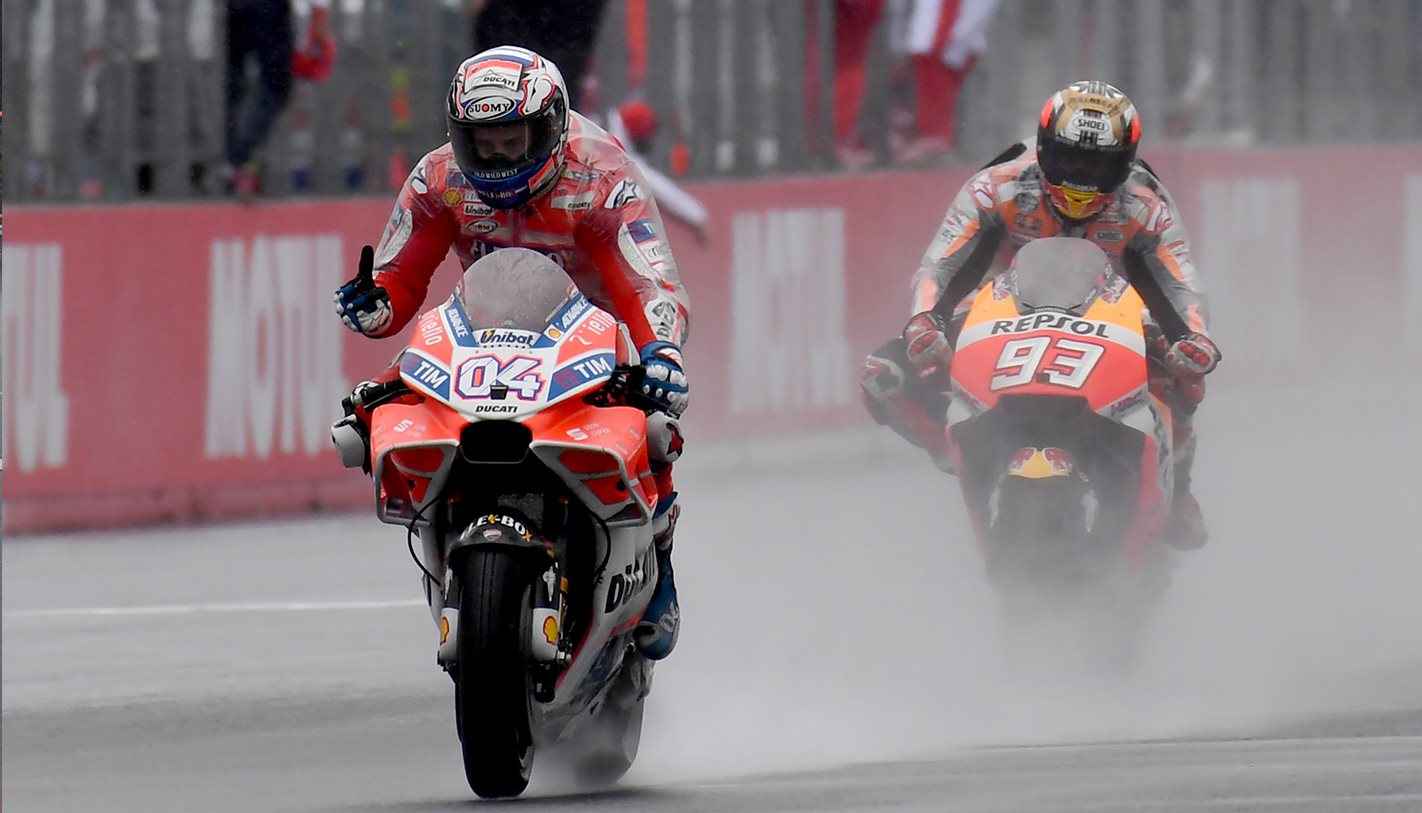 “I knew that he was going to attack me in the final two corners but I was prepared for this,” Dovizioso commented.  “I closed the door on him and he had to go a bit wide to pass me. It was absolutely vital to win here and I’m really so pleased for the whole team and for the championship.”

“It was an amazing race with the two guys fighting for the championship fighting for the win,” said Marquez. “I tried to push and be smooth but Andrea was very fast too for the entire race. Entering the last lap, I knew I had only a very small advantage ahead but then I made a small mistake in turn eight - well, quite a big mistake actually - and he caught me. After he passed he was very strong on the brakes and I wasn’t able to match him. In the last corner I tried again but it was not possible to pass him again. Today he did an incredible race and won but anyway I’m happy with our result as I was expecting him to be very, very fast here.”

But the Marquez family did manage a bold win in Moto2, where younger brother Alex (Marc VDS) delivered a wet weather masterclass. Stretching his advantage over the latter laps, Marquez was followed home by Xavi Vierge (Tech 3 Racing), who took his first podium, and Hafizh Syahrin (Petronas Raceline), the Malaysian landing his second podium in three races. Australia’s Remy Gardner was 12th.

Romano Fenati dominated Moto3.  Niccolo Antonelli (Red Bull KTM Ajo) took second, his first podium since the beginning of 2016, with Marco Bezzecchi (CIP) taking his first rostrum finish in third and making it three manufacturers on the podium - Honda, KTM and Mahindra.  Championship leader Joan Mir had a shocker, his priority being survival as he finished outside the points in 17th. He holds a big 55-point margin over Fenati but will be hoping for a dry track at Phillip Island.

Eight years after last testing a Formula One car with Toro Rosso, New Zealander Brendon Hartley has received a surprise call-up to race with the team in next weekend’s USA Grand Prix in Austin, Texas.

The drive became available when Pierre Gasly was otherwise committed to racing in the last race of the Super Formula Championship at Suzuka.

Toro Rosso wanted to evaluate Hartley and others for a permanent seat next year following the departure of Carlos Sainz Jr to Renault. 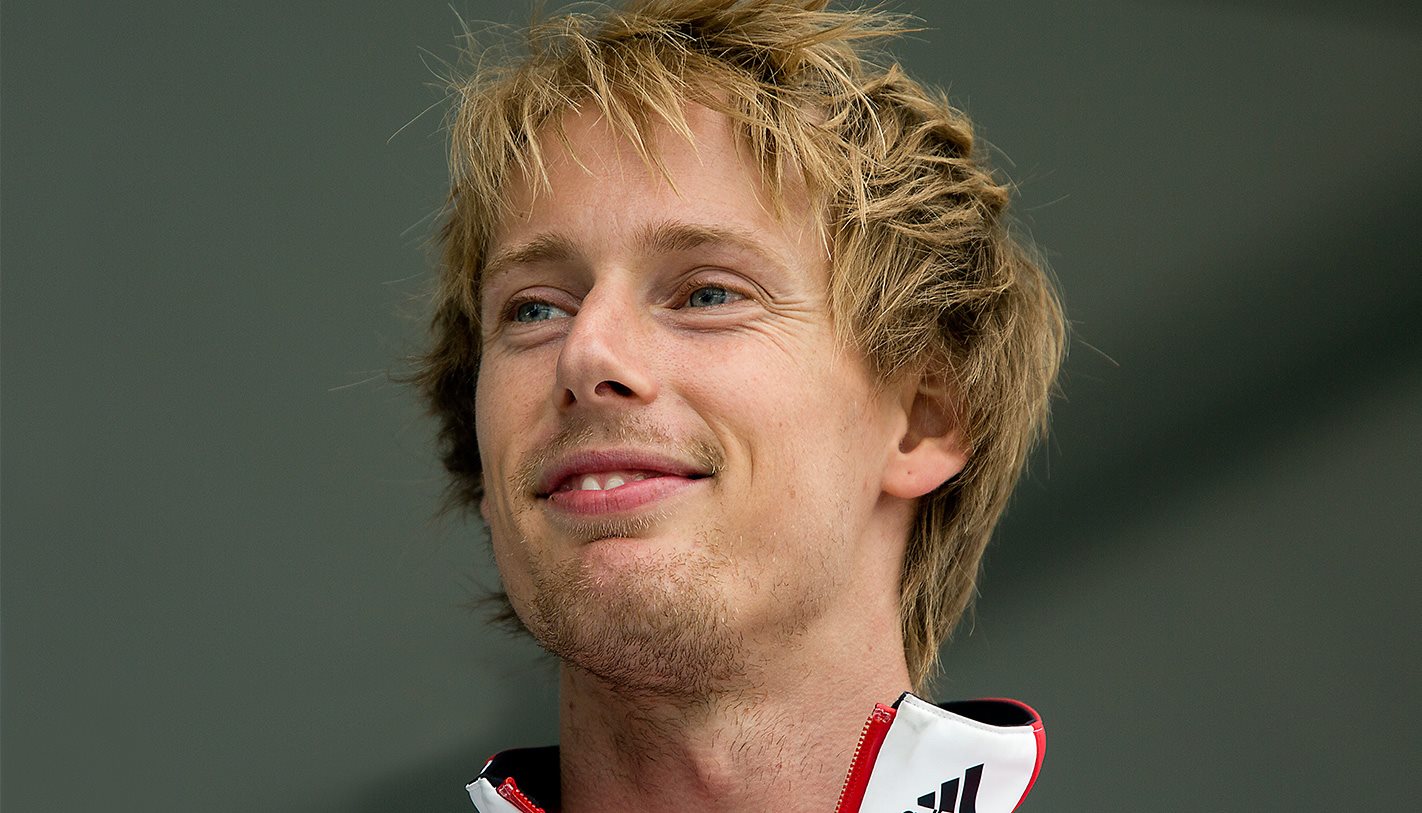 So after wondering whether his F1 dreams would ever be fulfilled, Hartley, now 27, will be taking part in his first F1 GP, at the Circuit of the Americas, alongside Daniil Kvyat.

Hartley’s old team-mate in the Porsche WEC squad, Mark Webber, welcomed the call-up decision. Webber has long been an admirer of Hartley’s ability having watched him up close racing the prototypes.

Since his last association with Toro Rosso, the rangy Hartley proved successful in many different categories, including the Formula Renault 3.5 Series, GP2 Series and sports cars.

In the last three years he successfully raced the LMP1 Porsche in the FIA World Endurance Championship and in 2015 won the WEC world title with Webber and Timo Bernhard.

In June this year Hartley won the 24 Hours of Le Mans race with Porsche. 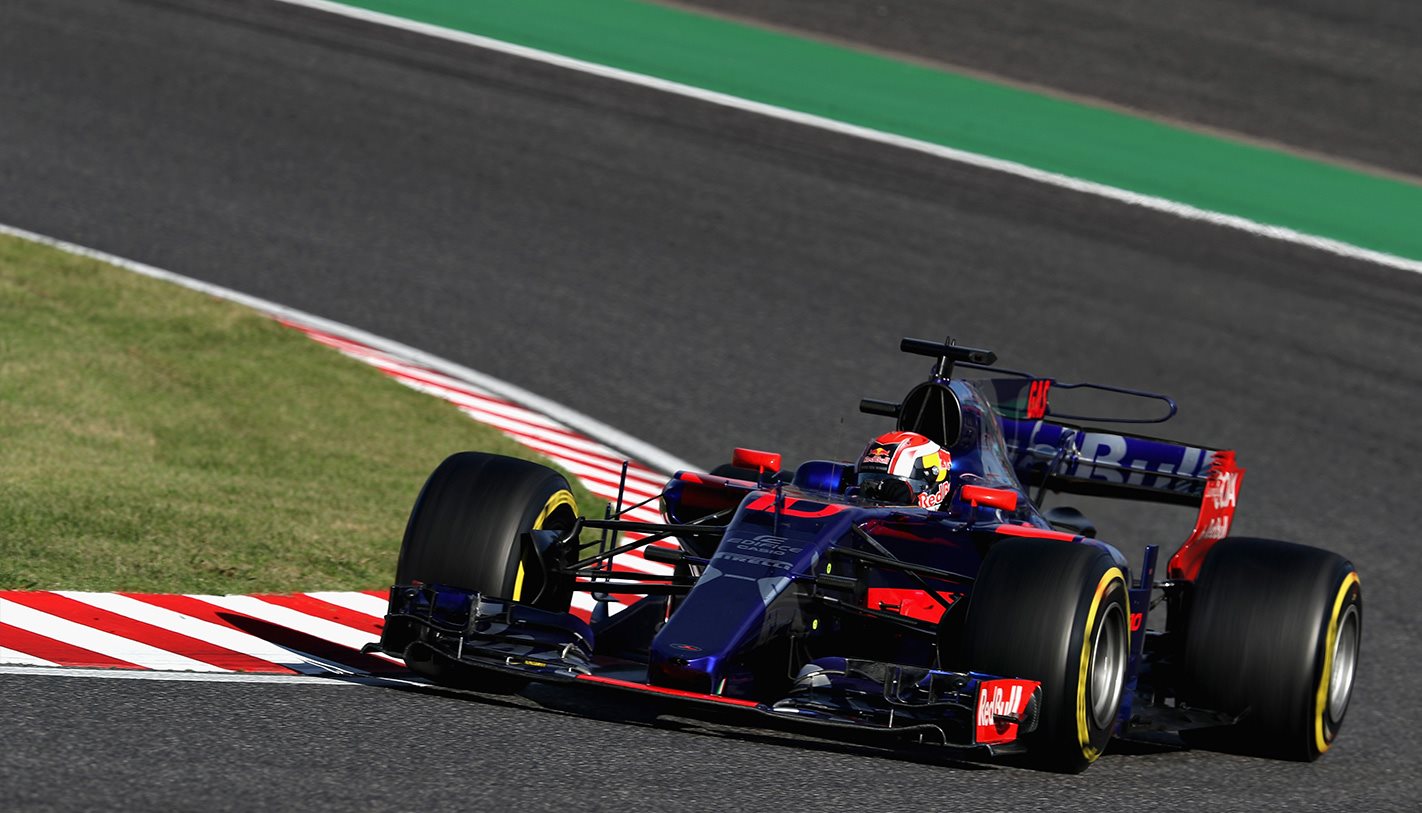 “What an amazing feeling!” Hartley said after the F1 call. “This opportunity came as somewhat of a surprise, but I never did give up on my ambition and childhood dream to reach F1. I have grown and learnt so much since the days when I was the Red Bull and Toro Rosso reserve driver, and the tough years I went through made me stronger and even more determined. COTA is a track I really enjoy and one I have raced at recently. I'm trying not to put too many expectations on my F1 debut, but I feel ready for it.”

In a nod to the huge G forces Hartley can expect at Austin, F1’s Martin Brundle tweeted: “That’s what is technically known as ‘a baptism of fire’. Brendon will be a shirt collar size up when he leaves Austin. Good luck.”

Hartley will become the ninth New Zealander to race an F1 car, and the first Kiwi since Mike Thackwell in 1984.

Hockenheim brings no joy to Aussie.

There were no bountiful gifts from the gods when Australian Joey Mawson wrapped up his European Formula Three Championship campaign in the finale at the Hockenheim.

A third place at the Nurburgring was the 2017 highlight for Mawson as the championship fell into the grip of McLaren-backed Brit Lando Norris of the Carlin team.

As usual, qualifying tends to dictate race outcomes, and so it was at Hockenheim: starting the three races, respectively, in 15th, 12th and 11th.

In race one, Mawson made a good start moved up to 13th on the first lap, and this is where he finished. He was on his oldest tyres for this race, saving the newer tyres for the next two races where he would start higher on the grid.

Race two was a disaster when he was forced to start from pit lane after stalling on the grid. Mawson chased down the field, passed six cars and finished 15th.

Mawson started from 11th in race three at Hockenheim – the final race of the 2017 championship – and finished ninth. He placed 13th in the championship, admitted it has been a tough year and harder to deal with after the success of the 2016.

“We do not know what category Joey will race in next year” Mawson’s manager Gwenda Searle told Wheels. “This sport is based on high levels of funding so this is what will decide the future.”  Mawson has been backed by a group of Australian business people this year.

No, it won’t be held on the actual reef

The popularity of tarmac closed-road events shows no signs of losing momentum as yet another is announced - Targa Great Barrier Reef, a Cairns-based three-day rally expected to attract a field of around 200 cars.

Locked in for the next three years, the new annual event, is modelled on the world’s largest tarmac rally, Targa Tasmania, which has been held annually on the Apple Isle since 1992.

Targa Great Barrier Reef will be a round of the four event CAMS Australian Targa Championship, which also includes Targa North West, Targa Tasmania, and Targa High Country in Victoria.

The extension of the series into Queensland was made possible through a three-year funding deal by Tourism & Events Queensland and Cairns Regional Council with series organiser, Targa Australia.

Video: 2016 Targa Tasmania behind the scenes

The inaugural Targa Great Barrier Reef  will run from August 31 to  September 2 next year, and will visit all key centres in the picturesque, tropical north, , including Port Douglas, Innisfail and the Atherton Tablelands.

Like other tarmac events the entry will represent a cavalcade of motoring history from pre-war classics right through to the latest exotic supercars.

The cars will tackle 15 stages across more than 200 competitive kilometres on a course that covers more than 800 kilometres across Tropical North Queensland.

The event will start and finish each day in Cairns, with a Super Street Stage on the Saturday night.

Targa Australia Director, Mark Perry, anticipates the new event will draw on the usual core of entrants, amateur and professional as well as  tapping into the lucrative Asian market due to the ease of travelling to Cairns.

Drivers’ title still to play for

Though out-paced by the Porsche competition in qualifying, Toyota Gazoo Racing fought back in atrocious conditions at Fuji Speedway to take a1-2 finish at the team’s home race. 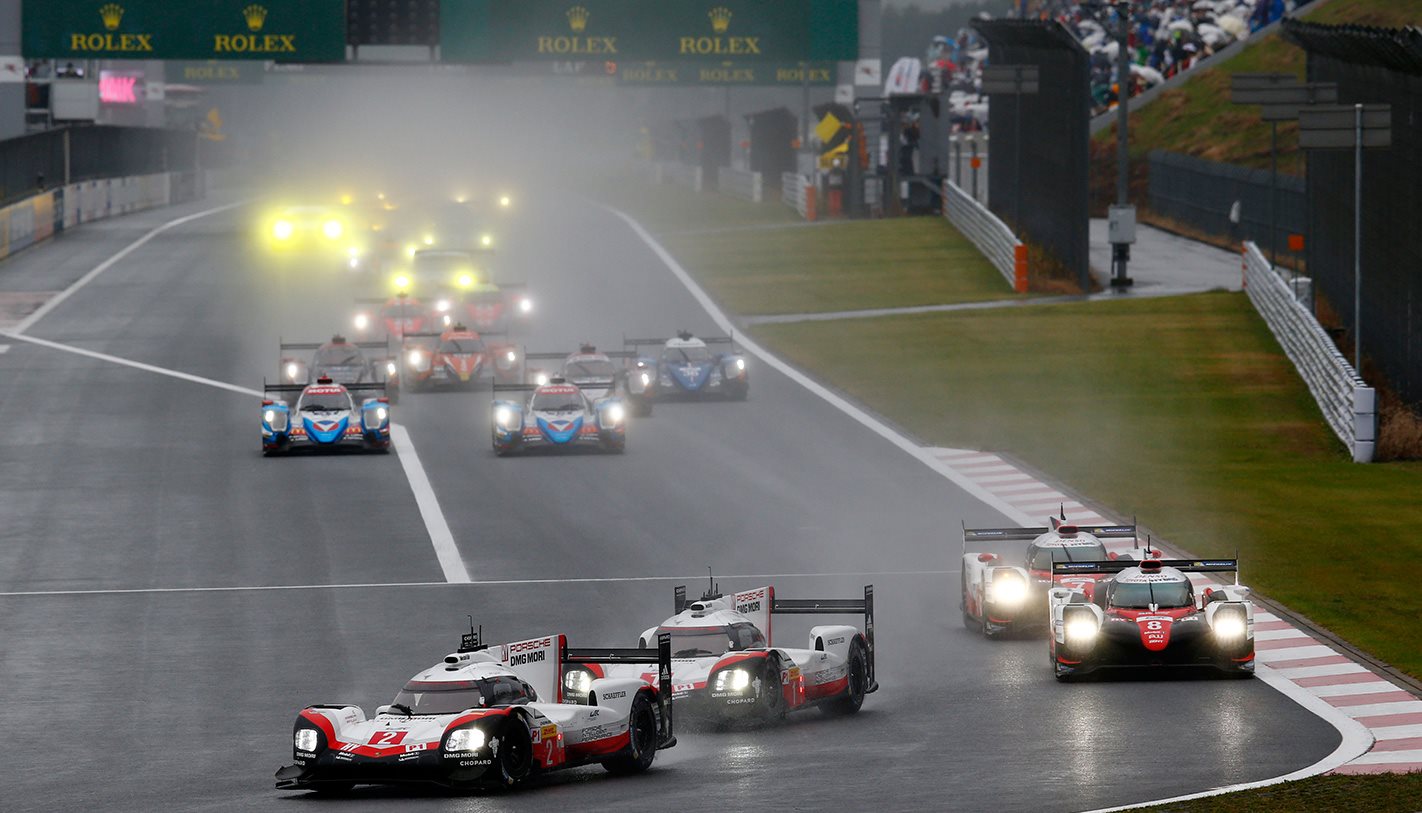 The dramatic wet and foggy seventh round of the 2017 FIA World Endurance Championship was a triumph for Sebastien Buemi, Kazuki Nakajima and Anthony Davidson who took the #8 Toyota TS 050 Hybrid to victory ahead of the sister #.7 Toyota driven by Kamui Kobayashi, Mike Conway and Jose-Maria Lopez.

Toyota seemed to have a tyre performance throughout the weather-affected race which saw six Safety Car periods, one Full Course Yellow and two red flag periods in an eventful race. 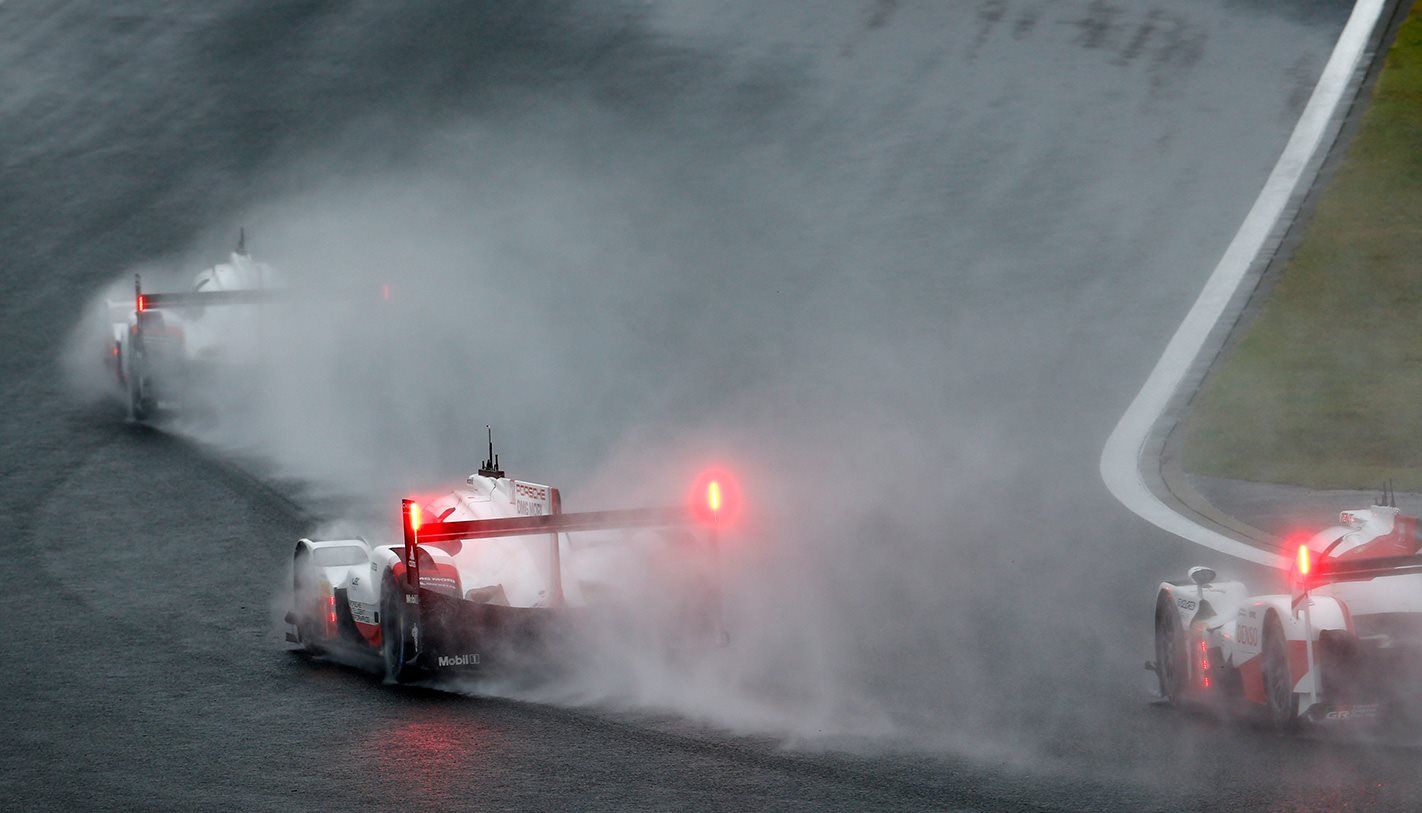 The result leaves the outcome of this year's drivers' crown in doubt as the title-leading #2 Porsche trio of Brendon Hartley, Earl Bamber and Timo Bernhard finished in fourth place. The gap between them and the #8 Toyota crew is now 39 points with 52 to play for in the last two races of the season.

Rounding out the Fuji podium was the #1 Porsche 919 Hybrid driven by Andre Lotterer, Neel Jani and Nick Tandy.