“Let's make some damn Falcons,” is the call to arms decreed by the creator of a Facebook event called ‘Storm the Old Ford Factory and Restart AU Falcon Production.’

It started as a joke, but now it seems the event is set to become at least something, given it has more than 8600 people who have clicked ‘attend’, and over 20,000 who are ‘interested’. 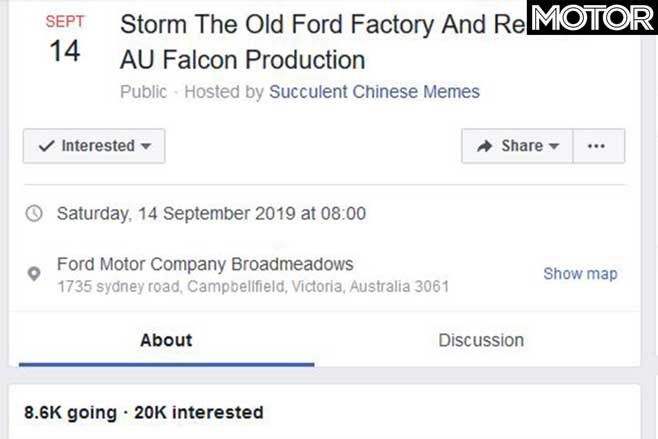 Hosted by a meme page called Succulent Chinese Memes (after a viral video of the arrest of a man charged with not paying for a “succulent Chinese meal”), the event’s focus on the AU Falcon doesn’t seem to have come from nowhere.

Ford’s most divisive model features regularly on the page, and we’ve contacted the admin to see if there’s any real connection… or if it’s all just for laughs.

“To be honest when I first made the event, it was just a bit of a laugh,” the admin for the page (who goes by ‘Blake’) told us.

“I figured it might get a little bit of attention and be forgotten about. But before I knew it nearly 30k people responded to it.”

It also seems event ‘attendees’ are attempting to organise a meetup of AU Falcons on the day of the event – September 14 – at Ford’s Broadmeadows plant, though whether it will be able to go ahead is up to Ford’s policy for groups of public cars being parked outside its building.

“There seems to be a running theme in the comments of holding an ‘AU muster’ there on the day,” Blake says.

"So now I'm thinking seriously about heading down there on the day to hold said AU gathering. There seems to be a lot of interest in it."

We’ve contacted Ford Australia to find out what might happen if a few dozen AU Falcons do actually show up on a Saturday and are awaiting an official response.