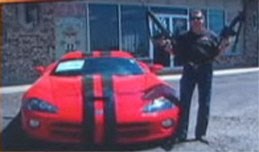 Not everyone is thrilled with the idea of a free assault weapon to clinch the deal.

Dodge this...
Gun-hating liberals are fuming at a Missouri car dealership, which hopes to sell an extra 100 GM pick-up trucks this year by giving away an AK-47 assault rifle to every new buyer.

Now he's into the heavy metal.

While some commentators are outraged that the dealership, Max Motors, is offering an assault weapon as a sales incentive, he is unrepentant.

He seems to believe every home should have an AK-47 as a disincentive to intruders.

The dealer points out that he's not actually handing over an AK-47 with the vehicle keys but sends the buyer on his or her way with a voucher redeemable at a local gun store.

There the individual is obliged to go through a round of background checks.

Which presumably makes it all right...

Some patriotic Americans are more peeved that the AK-47 is Russian. M16s would be more appropriate perhaps. Next year: land mines or a rocket launcher.

Chat on web forums appears to be running very much in favour of the unusual promotion.

"We get a lot of press out of these kinds of promotions," said Muller."We sell a lot of cars and we have a lot of fun."

Bad guys in Missouri are right now deciding they won't be invading any home with a shiny new GM product in the driveway.